Extraskeletal Osteochondroma of the Heel: A Case Report

Copyright: © 2015 Bilgin Y, et al. This is an open-access article distributed under the terms of the Creative Commons Attribution License, which permits unrestricted use, distribution, and reproduction in any medium, provided the original author and source are credited.

A 56-year-old woman was admitted with gradually increasing right heel pain, recent swelling and difficulty walking. Patient’s pain had been present for 5 years and have increased over the last 3 months. She had been treated with physical therapy with a diagnosis of calcaneal spurs for a year. Clinical examination revealed a nodule measuring 5×2 cm, localized swelling in the heel, cavus of foot, and tenderness to palpation located on the heel of right foot (Figure 1). X-ray showed soft tissue mass near by calcaneus at the plantar face of foot (Figure 2), which has central ossification are asand does not reach cortical space. Routine laboratory tests were within normal limits. Magnetic resonance imaging (MRI) showed a mass lesion has seen approximately 46×23 mm hypointense (centrallyisointense) in T1 weighted images and heterogeneous hiperintense in T2 weighted images. 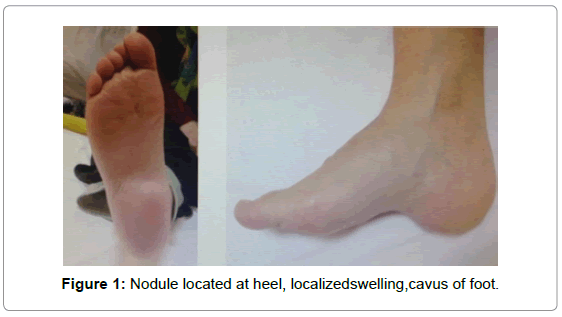 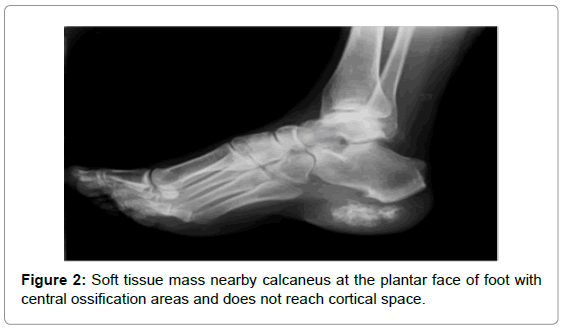 Figure 2: Soft tissue mass nearby calcaneus at the plantar face of foot with central ossification areas and does not reach cortical space.

Excisional biopsy planned for this mass on plantar face with prediagnosis of ostechondroma and heterotopic ossification. The tumor was completely resected under general anesthesia (Figure 3), revealing a yellowish mass with a thin capsule loosely connected to the soft tissues around heel but without any adhesion to the bone. Histologic examination showed benign osteochondromatous lesion, circumscribed lobulated nodular lesion covered with a fibrouscapsule (Figure 4). The layers from outside to inside; Fibrous capsule, mature hyaline cartilage, central ossification area. After removal of mass, patient relieved. Recurrence didn’thappen 18 months followup. 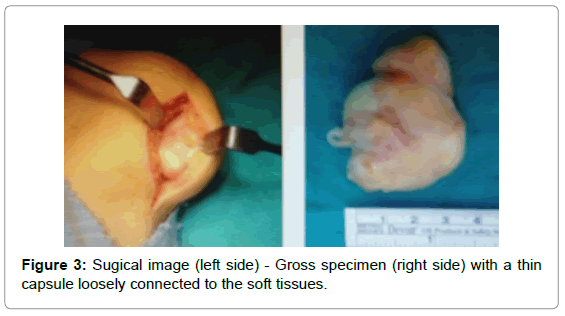 Figure 3: Sugical image (left side) - Gross specimen (right side) with a thin capsule loosely connected to the soft tissues. Extraskeletal osteochondromas, are slow growing solitary nodules of hyaline cartilage seen rarely [4]. It presents as cartilage covered bone mass in soft tissue. Hands, spesifically fingers is the most common site for this tumor, foot comes the second. Also researches showed widerange of locations for extraskeletal osteochondromas [3] in 2013 [4]. In 2010 reported similar cases in the plantar aspect of foot [5].

There is couple theories for developement of heel pad osteochondromas, some researchers come up with idea that it might develops as metaplasia of plantaraponeurosis [4,8]. Also, Singh et al. said it can form as seperation from calcaneal osteochondroma in one of their case report [4].

An extraskeletal osteochondroma often presents with central calcification or ossification are as that are not reaching cortex of bone in radiologic images. Other cases in literature shows MRI is the best for seeing the borders of the mass clearly, which is important for distinguish it from malignant tumors. On MRI, extraskeletal osteochondrom aappears as intermediate intensity on T1-weighted images, whereas it appears as a high signal intensity on T2- weighted images [9].

Osteochondromas, is the most common benign tumor of bone and rarely seen extraskeletally. It has been reported that they have low risk of malignant degeneration. We think, no surgical treatment is needed as long as these osteochondromas does not have risk factors for malignant transformation and stay asymptomatically, otherwise surgical excision should be the choice of treatment.