Copyright: © 2015 Hida Y, et al. This is an open-access article distributed under the terms of the Creative Commons Attribution License, which permits unrestricted use, distribution, and reproduction in any medium, provided the original author and source are credited.

Saccharides such as glucose, galactose and amino acids like lysine, phenylalanine are known as bio-markers of metabolic disorders, and several analytical methods have been developed to determine these bio-markers in blood and urine by enzymatic method, HPLC analysis and so on. Multi-biosensing systems for simultaneous determination of these bio-markers are presently expected to be necessary for troublesome diagnosis. We have previously proposed enzyme-sensors based on a two-dimensional surface plasmon resonance imager (2D-SPRi), which can sensitively monitor refractive index change of local region in the evanescent field on an Au chip. L-lysine sensor, L-glutamate sensor and galactose sensor has been developed each by combining oxidase reactions with 2D-SPR imaging of Os polymer-redox state. In this study, we aimed to develop a dual-enzyme sensor capable of the simultaneous detection of lysine and galactose by means of co-immobilizing LysOx/Os-HRP polymer spot and GalOx/Os-HRP polymer spot adjacently on the Au chip, which is divided into two sections.

Saccharides and amino acids are essential metabolites, playing an important role in energy production, because ATP, NADH, and FADH2 as energy carriers are made with saccharides and amino acids in cells through glycolysis and TCA cycle. Therefore, various kinds of sensors, which target some saccharides and amino acids have been developed for diagnoses of metabolic diseases such as diabetes, galactosemia, phenylketonuria, maple syrup urine symptom and high lysine blood symptom, etc. [1-11]. Furthermore, recent statistics data of medical treatments demonstrated that abnormality of the amino acids balance in blood was correlated well with some diseases, and a novel method to diagnose by using the data about free-amino acid concentrations with multi-variable analysis has been proposed recently [12-17]. For example, the Fischer ratio defined as the concentration of branchedchain amino acids (BCAA)/the concentration of aromatic amino acids (AAA), shows less than 2.5 for the blood of cirrhosis patients, while that of the blood of healthy person shows 3.5~4.0 [16]. It is also reported that metabolic syndrome causes variation of some amino acids level in the blood [15].

High performance liquid chromatography (HPLC) and the enzyme method are well known as conventional methods for the amino acids measurement [18-21]. HPLC analysis is good at sensitivity, reproducibility and quantitativity, however, it also has the shortcomings such as time-consuming, high costs and need of some complex treatments before the measurement. On the other hand, enzyme method is simple and easy but not good at multi-determination. Therefore, it is required to develop multi-enzyme sensors, which can determine some saccharides and amino acids simultaneously in easy, quick and sensitive way.

Several types of bio-sensors by means of surface plasmon resonance imager (SPRi) have been already reported. Slight change of refractive index in the evanescent field on the sensor chip enables us to image the surface state. Hence, this technology has been extensively used for observing molecular adsorption / desorption reactions, antigenantibody binding reactions and DNA hybridization reactions [22- 28]. In recent years, Os-HRP complex polymer featuring the ability to change the refractive index in accordance with its redox state was utilized along with glucose oxidase (GOD) to develop a SPR-enzyme sensor for glucose [29-32]. From this basic idea, we started the design and the measurements of multi-enzyme sensor using SPRi.

The multi-sensor chip was prepared as follows. First, the Au thin film of a SPR sensor chip was separated into two sections by cutting the chip surface with a cutter knife. Then Os-HRP polymer solution was dropped on both sides of the cutted Au chip with 2 mm interval and dried at 4°C. Next, mixture of L-lysine oxidase (LysOx) solution or galactose oxidase (GalOx) solution and 1% glutaraldehyde solution was dropped onto each Os polymer spot and dried at 4°C. A silicon well (flexiPERM®) was attached onto the dual-enzyme chip to make measurement chamber, and the chamber was filled with a PB solution (0.1 M, pH 6.8) before measurements. The sensor chip was then set on the 2D-SPR measurement prism.

All sensing experiments were performed with 2D-SPR sensor (SPR imager 04A, NTT Advanced Technology [NTT-AT], Japan), which was equipped with a collimator lens, P and S-polarizer, four kinds of magnification lenses (× 1, 2, 4 and 7) and a CCD camera. A 770 nm LED was used as an incident light source to arouse SPR after passing through a collimator lens and P-polarizer.

SPR curves were obtained by changing measurement angle to determine the resonanse angle (θr) at each enzyme spot, and optimum angle for time-course measurement of reflection intensity before and after injection of the sample solution containing lysine and galactose. Thereafter, time-course measurement of reflection intensity (RI) at the fixed angle was performed. At this time, several sample solutions were injected into the sensor chamber at 1 minute after record starting. RI change was observed at each spot, and all the data were recorded and analyzed by analysis software.

After these experiments, oxidized-state of Os polymer at each enzyme spot was re-reduced by NADH solution to use this sensor repeatedly.

Detection principle of this sensing system for lysine and galactose is described as follows. First, lysine or galactose was oxidized to produce H2O2 at each enzyme spot when sample solutions containing each substrate are injected into the sensor chamber. Os complex polymer was transformed from reduced form (Os2+) to oxidized form (Os2+) by H2O2 with HRP catalysis [29]. Refractive index change caused by the oxidation of Os complex polymer was observed as RI change [30,31], and simultaneous detection of lysine and galactose at each spot was possible.

Figure 1 shows SPR curves at LysOx/Os polymer spot, GalOx/Os polymer spot and bare Au region in the angle scan mode. Resonance angles (θr) were 55.6°, 56.4° and 51.6°, respectively. In case of Os complex polymer and enzymes, whose refraction index are higher than that of water on Au chip, θr showed higher, and it indicates that each enzyme/Os polymer spot was certainly immobilized. It was inferred that higher θr of GalOx/Os polymer as compared with that of LysOx/ Os polymer spot may be due to the large extent of cross-linkng between GalOx and glutaraldehyde, and the large mass of GalOx existed on the Os polymer layer. 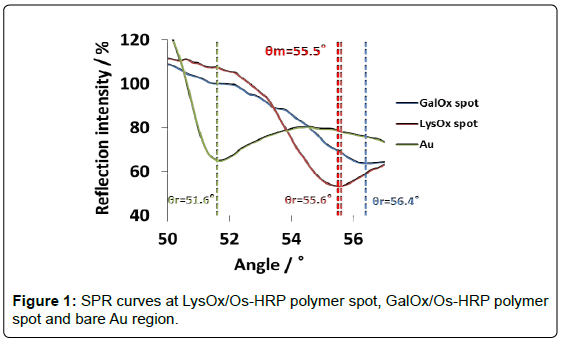 Figure 2: SPR images and reflection intensity at each enzyme spot before and after injection of a) 1 mM lysine or b) 1 mM galactose. Figure 4 shows the dependence of reaction rate (response) of each enzyme spot on the lysine and galactose concentration. It was demonstrated that lysine can be determined from 20 to 200 μM without influence of galactose, and galactose also can be sensed in the rage from 50 to 1000 μM without influence of lysine. It was confirmed that calibration curves of dual-sensing were almost same as compared with that of each single sensing. The mean and SD values at LysOx and GalOx spot were calculated at 1.26 ± 0.141%/min and 4.55 ± 0.392%/ min in a concentration (100 μM Lys at LysOx spot, 1 mM Galactose at GalOx spot, n=7) on a chip, respectively. And CV values were also calculated at 11.2% and 8.6%, respectively. These results demonstrated that developed dual-enzyme sensing system has capability of measuring these two analytes simultaneously at each enzyme spot without any cross-talk. Substrate specificity was also investigated with several kinds of saccharides and amino acids in Figure 5 (It was tested for separate amino acids and saccharides samples). As we expected, each enzyme spot showed high specificity for lysine and galactose respectively comparing other saccharides and amino acids. 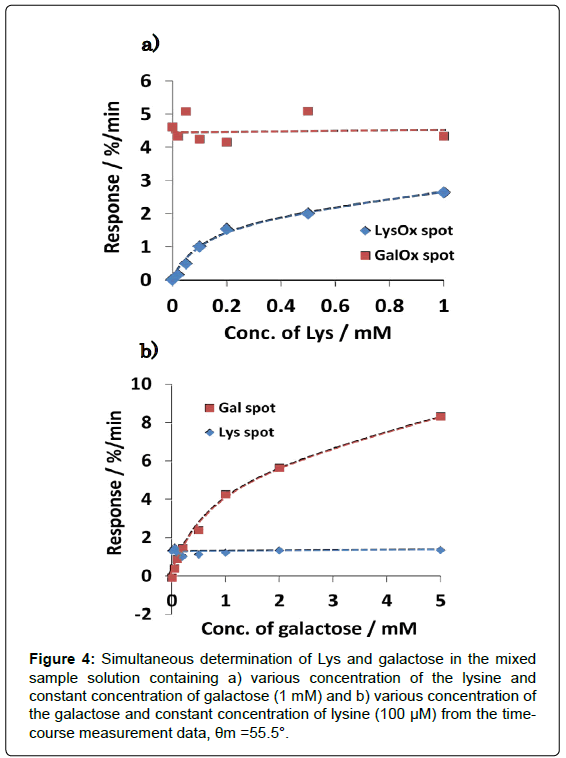 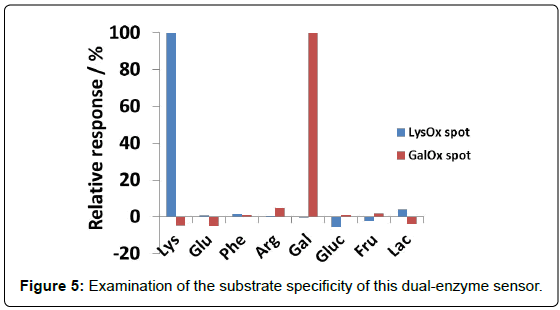 Figure 5: Examination of the substrate specificity of this dual-enzyme sensor.

In this paper, we proposed 2D-SPR based dual-enzyme sensing system by which simultaneous determination of each substrate was feasible without cross-talk by using an Au chip separated into two sections. L-lysine oxidase and galactose oxidase were chosen for sensing oxidase in this time and combined with Os-HRP complex polymer to prepare two adjacent enzyme spots (LysOx/HRP-Os spot and GalOx/ HRP-Os spot) on an Au sensor chip. L-lysine and galactose were determined specifically at each spot from 20 to 200 μM and from 50 to 1000 μM, respectively. This sensor system also has great advantage of simple and quick measurement (within 2 min without pretreatment). Then, we will try to demonstrate accuracy of this method for plasma sample, in which lysine and galactose were determined with other methods like HPLC as future prospects. These results suggested that our sensing strategy based on a 2D-SPRi was capable to measure many kinds of enzyme substrates simultaneously and applicable to medical screening.