Context: In order to break the chain of tuberculosis transmission, all diagnosed cases must be followed until the treatment is complete. Several factors influence the treatment outcomes, particularly in hospitals where care is provided for patients with the most severe cases.

Methodology: The purpose of this retrospective cohort study was to analyze the evolution of the treatment outcomes from 2011 to 2015 and identify factors associated with unsuccessful TB treatment. Tuberculosis cases confirmed by bacteriology and/or by Xpert-MTB/Rif test, being treated in the Department of Infectious and Tropical Diseases at Fann University Hospital in Dakar, were included. The trend Ch2 test was used to measure the evolution of treatment outcomes from 2011 to 2015 and logistic regression for the identification of the factors associated with unsuccessful TB treatment.

Conclusion: Overall, progress has been made in monitoring patients who have been treated for tuberculosis. However, the favorable outcome percentage could be increased by improving the nutritional condition of patients and intensifying early screening and fighting against HIV infection.

Tuberculosis is one of the causes of death in the world. The Global Plan to end tuberculosis on the period of 2016-2020 is to reach 90% of individuals who need TB treatment, and to achieve at least 90% treatment success [1]. These targets are particularly important for the smear-positive pulmonary tuberculosis cases which are contagious and are responsible for the dissemination of the disease. The diagnosis of these forms improved during these past years with liquid cultures, new LED fluorescent microscopy and the advent of Gen-Xpert/MTB which helps identify Mycobacterium tuberculosis and test susceptibility to rifampicine [2,3].

In Senegal, the incidence of tuberculosis estimated by WHO is 139 cases per 100, 000 habitants. Among the 13, 660 cases detected in the population in 2017, 88% were bacteriological Pulmonary tuberculosis [4]. The Screening, the application of directly observed treatment and the follow-up care of the diagnosed cases are provided at the operational level by the 80 tuberculosis treatment centers (CDT), including Fann’s department of infectious and tropical diseases (SMIT) of the national university hospital center (CHNU). Unlike the cases on care in health centers, the clinical presentations are more severe in hospitals. The purpose of this study was to analyze the evolution of treatment outcomes of confirmed tuberculosis cases from 2011 to 2015 and identify factors associated with unsuccessful TB treatment at a university hospital of Dakar in Senegal [5].

We conducted this study in the Department of Infectious Diseases at Fann University Hospital in Dakar (Senegal). It has a Screening and Treatment Centre of TB since 1988. All diagnosed patients are registered and monitored for treatment outcomes according to the recommendations of the National Tuberculosis Control Program (NTP). The treatment is directly observed for the hospitalized patients and then after the follow-up care will be done on an outpatient basis after discharge from the hospital. The dispensing of anti-tuberculosis drug is provided by a state-certified nurse, under the supervision of a doctor in charge

Our hospital-based retrospective cohort study included all the bacteriologically confirmed (by microscopy or Xpert MTB/RIF assay or both) tuberculosis cases treated from 2011 to 2015.

Case definitions: A case is defined According to previous TB treatment received by the patient. TB cases were classified as a new case (A patient who has never had treatment for TB or who has taken anti-tuberculosis drugs for less than 1 month) or a retreatment cases (relapse cases, Treatment after failure, Treatment after default).

Cured: A pulmonary TB patient with bacteriologically confirmed TB at the beginning of treatment who was smear or culture negative in the last month of treatment and on at least one previous occasion.

Completed treatment: A TB patient who completed treatment without evidence of failure but with no record to show that sputum smear or culture results in the last month of treatment and on at least one previous occasion were negative, either because tests were not done or because results are unavailable.

Failure: A TB patient whose sputum smear or culture is positive at month 5 or later during treatment.

Died:A TB patient who dies for any reason during the treatment

Lost to follow-up: A TB patient whose treatment was interrupted for 2 consecutive months or more.

Transferred out:This includes cases “transferred out” to another treatment unit as well as cases for whom the treatment outcome is unknown to the reporting unit

The Head of the Department of Infectious Diseases approved this retrospective study. All data collected were anonymized prior to analysis.

We included 413 confirmed tuberculosis cases of which 91.8% new cases. The average age was 38 ± 12 years and the sex ratio 1.3. More than three-quarters of the patients (70.2%) came from the urban and suburban districts of Dakar region (Centre, North, South, Pikine) (Tables 1 and 2).

Among the 413 cases, 191 (46.4%) were hospitalized during the TB diagnosis. The average weight during the beginning of the antituberculosis treatment was of 51 kg ± 10.8 kg. The isolated pulmonary tuberculosis was the most frequent (86.2%), followed by the multifocal tuberculosis (11.8%). The lymph node (7.4%) and neuro-meningeal (5%) localizations were the predominant extra-pulmonary forms.

313 cases of TB were confirmed by microscopy and Gen-Xpert test was positive in 100 patients. No Rifampicin resistant was detected. Gen-xpert was predominantly positive for pulmonary specimens (96 cases), the cerebrospinal fluid (LCR) (10 cases; 9.7%) and the lymph node puncture fluid (8 cases; 7.7%). The HIV seroprevalence was 48.2%. The cotrimoxazole prescription rate among the TB/HIV coinfected patients was 88.9% and almost one third was on antiretroviral treatment (30.7%) during hospitalization. 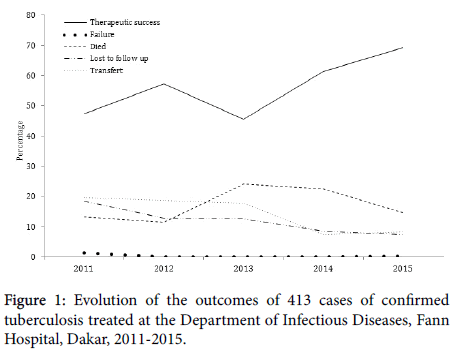 Figure 1: Evolution of the outcomes of 413 cases of confirmed tuberculosis treated at the Department of Infectious Diseases, Fann Hospital, Dakar, 2011-2015.

This study done at the hospital level in a Dakar environment confirms once again the importance of Gen-xpert in the tuberculosis diagnosis. About a quarter of the cases (24.9%) has been confirmed by means of its application. It was mainly positive among the pulmonary tests (93.2%). These data comply with the literature data. Steingart KR found again a sensibility (Se) of 89% [85%-92%] and a specificity of 99% [95%-99%] of Gen-Xpert for the pulmonary tuberculosis diagnosis with a difference according to the microscopy results (Se: 89% [85% – 92%] Microscopy (+) and Se: 67% [60% – 74%] Microscopy (-) [6]. However, the sensibility of Gen-Xpert is variable at the extra-pulmonary localizations: 50.9% in pleural fluid, 71.1% in the cerebrospinal fluid and 82.7% in the urine [7]. In our cases, it is mainly positive in the cerebrospinal fluid (9.7%) and the lymph node fluid (7.7%).

Concerning the outcome of patients, even if we have noticed a significant increase percentage of patients with successful TB treatment from 2011 to 2015 (47.4% to 69.3%, p=0.006), that rate remains low. These results are mainly related to the high prevalence of HIV infection (48.2%) and the high percentage of hospitalized patients (46.4%) in our cohort. The unsuccessful TB treatment was associated to hospitalization at TB diagnosis (AOR=7.15; 95%CI: 4.23 – 12.10) and co-infection with HIV (AOR=2.07; 95%CI: 1.17 – 3.71). These results are similar to those of Amante TD in Ethiopia (OR=2.5; 95%CI: 1.34 – 5.7) [8]. Excess mortality of co-infected patients has been clearly demonstrated. Most of the studies agree on the negative impact of HIV upon successful TB treatment among the tuberculosis patients [9,10] in relation to immuno-suppression presentation, the presence of other opportunistic infections and the complexity of the co-administration of anti-tuberculosis and antiretroviral treatment. Only one third of our patients were on antiretroviral treatment, this is due to the fact that some of them died, disappeared or were transferred out before being on treatment. In some cases, the application of antiretroviral therapy has not been notified to the nurse in charge of the treatment.

In our series, the proportion of lost to follow-up patients was high (11.6%). Comparable data were reported from Morocco by Hassani (10.3%) [11,12] and Diallo from Mali (17.4%) [13]. Previous history of tuberculosis, occurrence of side effects, family problems, and stigmatization has been reported as causes of treatment interruption. Continuous decline of the lost to follow-up patients rate (18.4% to 7.4%, p=0.04) noticed in our study due to the work of the social services department must be maintained. The National Tuberculosis Control Program is recommending that a patient should be sent to the health facilities close to the patient residence in order to lower the transport cost that may help to decrease the rate of the lost to followup patients.

Indeed, this strategy aims to strengthen adherence to antituberculosis treatment. If it is effectively applied, it will help to prevent the occurrence of new multidrug-resistant cases.

The relation between successful TB treatment and gender has not been noticed. But, some studies had pointed out that correlation [15]. In Africa, it is recognized that women have more access to health care services but nevertheless their active lives can have a negative impact on the treatment adherence.

Contrary to the findings of Kigozi, South Africa Gen who had noticed a low failure rate in older patients (p<0.001) [14], difference in terms of age has not been found in your study.

A positive association has been found between unsuccessful TB treatment and low weight at the beginning of the anti-tuberculosis treatment (AOR=0.33; 95%CI: 0.14 – 0.77). Likewise, Lackey [16] had found that the rate of successful TB treatment was more frequent in patients with body mass index>18.5 kg/m2 (OR 2.08; 95%CI: 1.21-3.56). Many researches have shown that malnutrition is a factor of poor prognostic [17,18]. During HIV infection, malnutrition is mostly the secondary opportunistic cause of digestive infections such as the oropharyngeal candidiasis, the infectious diarrhea.

By multivariate analysis, there was not a correlation between successful TB treatment and treatment regime. On the other hand, researchers have reported that patients on treatment were more in treatment failure risk [19,20] and that might be related to the emergence of strains resistant to the treatment.

Although there is a significant increase in the rate of successful TB treatment for confirmed tuberculosis patients, improved is still needed to achieve the 90% successful treatment rate. The recommendation actions are early application of the antiretroviral therapy and the improvement of patient’s nutritional condition since the main two factors that influence the treatment and make the treatment unsuccessful are HIV infection and low weight during the beginning of the treatment.

Copyright: © 2019 Déguénonvo LF, et al. This is an open-access article distributed under the terms of the Creative Commons Attribution License, which permits unrestricted use, distribution, and reproduction in any medium, provided the original author and source are credited.