Fatal Alcohol Poisonings and Poisonings by Other Toxic Substances in Russia

Alcohol is the biggest killer in Russia, accounting for about half of deaths among working-age men [1-3]. The rate of deaths from alcohol poisoning in this country is among the highest in the world [4]. Compelling evidence suggests that the alcohol surrogates (industrial spirits, antiseptics, lighter fluid and medications containing alcohol) may be responsible for the extremely high level of fatal alcohol poisonings in Russia [5]. Some experts reasonably argue that alcohol surrogates pose a risk to human health and undermine alcohol control policy measures introduced in this country over the last decade [6,7].

Historically, alcohol control policies designed to restrict availability of legal alcohol in Russia have driven surrogates consumption growth. Alcohol surrogates consumption increased substantially following the prohibition of vodka sales in Russia during World War I [8]. A similar rapid rise in consumption of moonshine (Samogon) and surrogates has occurred during Gorbachev’s anti-alcohol campaign in the mid-1980s [9]. This campaign is the most well-known natural experiment in the field of alcohol policy. In May 1985 Gorbachev launched the anti-alcohol campaign which was design to tackle alcohol-related problems in the Soviet Union by restricting the availability and affordability of alcohol [1].

The opinions about the effects of this natural experiment vary substantially. Most experts agree that the campaign did produce a number of positive effects, such as a decline in alcohol consumption and a drop in alcohol-related mortality [1,4]. Furthermore, the antialcohol campaign has shown that alcohol control measures may have a direct impact on population drinking and alcohol-related harm in Russia. Some experts, however, argue that the beneficial health and social effects of this campaign have been overestimated [10]. It is widely believed that one of the negative consequences of this campaign was the dramatic growth in the number of deaths from poisonings by non-beverage alcohol surrogates [11].

This paper aims to clarify this important issue by analyzing the trends in fatal alcohol poisonings and poisonings by other toxic substances in Russia between 1956 and 2005.

The data on age-adjusted sex-specific mortality rates per 1000.000 of the population are taken from the Russian State Statistical Committee (http://www.gks.ru). To examine the relation between fatal alcohol poisonings and poisonings by other toxic substances trends across the study period a time series analysis was performed using the statistical package “Statistica 12. StatSoft.” Bivariate correlations between the raw data from two time series can often be spurious due to common sources in the trends and due to autocorrelation [12]. One way to reduce the risk of obtaining a spurious relation between two variables that have common trends is to remove these trends by means of a “differencing” procedure. The process whereby systematic variation within a time series is eliminated before the examination of potential causal relationships is referred to as “prewhitening.” This is subsequently followed by an inspection of the cross-correlation function in order to estimate the association between the two prewhitened time series. 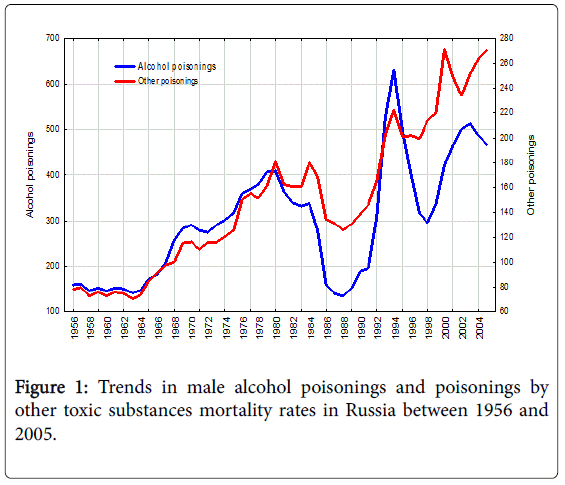 Figure 1: Trends in male alcohol poisonings and poisonings by other toxic substances mortality rates in Russia between 1956 and 2005. 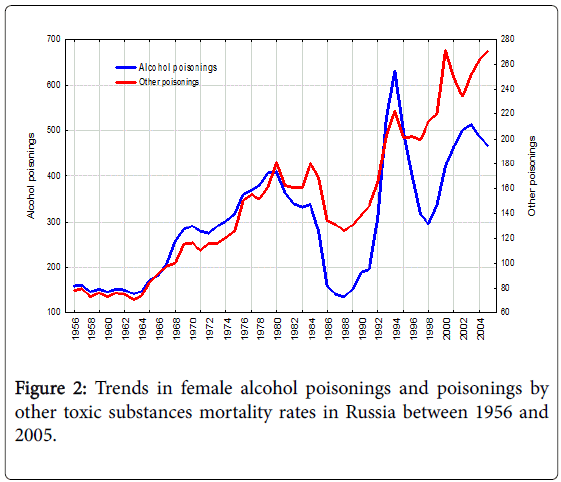 Figure 2: Trends in female alcohol poisonings and poisonings by other toxic substances mortality rates in Russia between 1956 and 2005.

As can be seen from Figures 1 and 2, the alcohol poisonings mortality rates for both sexes dropped sharply between 1984 between 1988. Substantial reduction was also recorded in the number of deaths from poisonings by other toxic substances in the mid-1980s. Thus, the empirical evidence does not support the claims that the anti-alcohol campaign contributed to the dramatic growth in fatal poisonings by non-beverage alcohol surrogates.

A large increase in the drinking of poor quality illegal alcohol and non-beverage alcohol surrogates underlies the extremely high rates of fatal poisonings by alcohol and poisonings by other toxic substances recorded in the early 1990s [1]. Several cases of mass poisoning by alcohol surrogates were recorded during the last decade [13]. The case of surrogate poisoning was registered in Yekaterinburg (Siberia) in 2004, and further reports spread among the Russian regions during the following years [5]. Consumption of surrogate alcohols which contains high concentrations of methanol remains a widespread problem in contemporary Russia [7].

In conclusion, the official statistical data do not support the claims that the Gorbachev’s anti-alcohol campaign contributed to the dramatic growth in fatal poisonings by non-beverage alcohol surrogates. The parallel trends in mortality from alcohol poisonings and poisonings by other toxic substances may suggest that a substantial number of deaths from other toxic substances are actually deaths from alcohol surrogates. In relation to this, the Russian government should consider a number of potentially effective approaches addressing to the problem of the non-beverage alcohol surrogates, including raising public awareness of the life treating danger, posed by these products.

Copyright: © 2017 Razvodovsky YE. This is an open-access article distributed under the terms of the Creative Commons Attribution License, which permits unrestricted use, distribution, and reproduction in any medium, provided the original author and source are credited