Copyright: © 2015 Yilmaz M, et al. This is an open-access article distributed under the terms of the Creative Commons Attribution License, which permits unrestricted use, distribution, and reproduction in any medium, provided the original author and source are credited.

Introduction: Tension pneumocephalus occurs when a continuous flow of air accumulates in the intracranial cavity and produces a mass effect on the brain. Presentation of case We describe a fatal case in a 16-year-old boy who developed extensive tension pneumocephalus following basal skull fracture after acute head trauma that required surgery.

Discussion: Although the aetiology of tension pneumocephalus is obscure, a good result could be achieved with an early diagnosis and prompt treatment using burr hole trephination and saline infusion.

Pneumocephalus, also known as intracerebral aerosel or pneumatocele, is defined as the presence of gas within any of the intracranial compartments of the cranial vault [1]. It occasionally develops in conjunction with basal skull fractures and head trauma is the most common cause [2]. Tension pneumocephalus results from the entrapment of intracranial air due to a check valve system [1,2]. Tension pneumocephalus following basal skull fracture after head trauma is an uncommon, but potentially fatal condition that results in a mass effect revealing abnormal neurological features [3]. Therefore, it should be distinguished from simple pneumocephalus and should promptly be evacuated [1]. The situation can be explained with acute penetration of huge amount of air into the cranium through to frontobasal fracture and torn dura by strong Valsalva’s maneuver resulting from coughing and sneezing. Intracranial air may be located in the epidural, subdural, subarachnoid, intraparenchymal or intraventricular compartments. The air is most frequently seen in the frontal area and rarely in the posterior fossa [1]. Extensive tension pneumocephalus secondary to head trauma is rare and the aetiology is controversial [2]. This condition is potentially life-threatening, and it should be remembered in a patient whose functional mental status has deteriorated following head trauma. Evacuation of the air under high pressure results in dramatic and fast recovery.

A 16-year-old boy presented with frontal bone and basal skull fractures after acute head trauma and had a Glasgow Coma Scale of 15. Frontal sinus and basal skull fractures were managed conservatively. Twenty days after the injury, the patient became obtunded and lethargic. The CT scan demonstrated an extensive pneumocephalus originating from the frontal skull base fracture area extending to the cerebral cisterns resulting in brain compression. Bilateral frontal air collection of 6 × 5 × 7 cm was observed (Figure 1). With respect to clinical and radiological findings, the diagnosis of tension pneumocephalus was established. In order to relieve the compression of brain by entrapped air, the patient underwent an emergency operation. Bilateral frontal burr hole expulsion of the pneumocephalus aided by irrigation with isotonic saline using a size-10 nasogastric tube was performed. The expected sudden gush of escaping air did not occur thoroughly and the negative pressure was disengaged during surgery. Subsequent to the removal of drain on 3rd postoperative day, CT scans showed that only some of the air had been drained out (Figure 2). Intravenous broad spectrum antibiotics were routinely administered both pre- and post-operatively. Due to the deterioration of clinical state of the patient on 4th postoperative day, the patient was re-operated for evacuation of pneumocephalus. Anterior skull base exploration, repair of the skull base defect with autogenous fascia lata and lumbar drainage via a lumbar puncture were performed. The patient seemed to exhibit a slow and insidious recovery in the first postoperative week. However, the patient underwent cardiopulmonary arrest 2 days after the removal of drain. Despite the resuscitation efforts, he died on the 3rd week after the occurrence of initial head trauma. 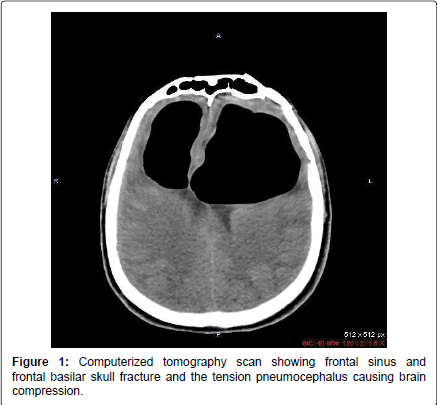 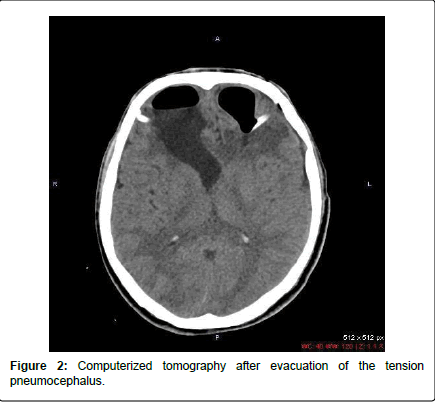 Figure 2: ComputerizedComputerized tomography after evacuation of the tension pneumocephalus.

This case reminds three important messages to take home: First, when there are basal skull fractures and pneumocephalus following a head trauma, focus and awareness should be directed to the clinical course of the patient. Second, despite the fact that it generally occurs during early posttraumatic period, it may also occur in the late phase. Although the aetiology of tension pneumocephalus is obscure, a good result could be achieved with an early diagnosis and prompt treatment using burr hole trephination and saline infusion. Tension pneumocephalus is a rare and emergency neurosurgical condition that requires a high index of suspicion for timely diagnosis, especially in open head injuries.