Copyright: © 2016 Xiao J, et al. This is an open-access article distributed under the terms of the Creative Commons Attribution License, which permits unrestricted use, distribution, and reproduction in any medium, provided the original author and source are credited.

Fines migration can cause severe damage to formation permeability and can plug the formation under certain circumstances. To effectively address this address, the mechanisms of fines migration and factors that causing fines migration were analyzed in this study. Different treatment techniques were discussed in this paper and the newly application of UTTA has been very successful in most formation types. The films it forms can enhance the ability of formation to withstand high shear stress and high flow rate. Lab core flow tests demonstrated this positive effects and it can greatly minimize the side effect of acidizing treatments, as a post-treatment method.

In the pore spaces of sandstone reservoirs, the very small loose solid particles are slowly incorporated into the sand grain in a long geologic time [1]. They particles are usually called formation fines and they are mainly classified into two basic categories: clays and nonclays particles. The non-clay particles can be quartz, amorphous silica, feldspars, zeolites, carbonates, salts and micas. Additionally, those formation fines can be incorporated into formation during drilling or completion operations. They can be part of the sandstone formation by other means as well. In the realm of formation damage, fines have been widely to be considered one of the main formation damage problems. Because they are loose in nature and cannot be placed in place or be bound together with sand grains physically by cementing materials [2-5]. Under certain circumstances, those formation fines, initially located in the interior surface of formation matrix, will migrate along flowing fluids in the formation. Along the flowing path, they are easily accumulated in the restriction points of the pore throat. Upon reaching certain concentration [6], those restriction points will prevent further flowing of fluids. Severe plugging occurs and thus considerably reduces the permeability of formation permeability. In this paper, various causes of fines migration were discussed firstly and then the treatment methods of fines migration were presented. The application of newly ultra-thin trackifying agent (UTTA) was addressed in details [7-9]. UTTA was especially helpful in controlling high rate-producing or injection wells. It can also be used as a post-treatment following the application of acid fracturing or matrix acidizing. Commercial service companies have developed and applied UTTA very successfully in recent years. This paper discussed the mechanisms of UTTA and experimental data and field cases were present for better understanding [10].

Dynamics of fines migration can be ruled by many factors. It can be governed by mineralogy and permeability of the rock, salinity of the water (either injected or produced water), pH value, or even by the drag forces, which is a combination effect of flow velocity, turbulence and fluid viscosity [10-15]. Figure 1 shows a typical scenario of fines migration. Fines accumulated in the pore throat area and caused severe permeability damage to the formation. There are essential three steps in the process of fines migration: presence of fines in the formation, breaking mechanism to cause fines to break apart, and trapping mechanisms to hold fines in place. Trapping can occur as a result of bridging, ionic attraction, or wettability effect. To observe the problems of fines migration, various techniques can be applied, such as production curve analysis, back flow test or core flow testing to evaluate the critical velocity and water sensitivity [16,17]. 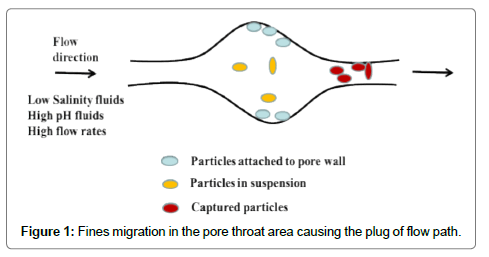 There are various factors that can cause fines migration. The main factors are high flow rate, wettability effect, ion exchange, two phase flow, and acidizing effect, etc. The following sections discussed the factors in details.

Specially, each formation has a unique critical flow rate when fines migration occurs. The drag force applied to a fine particle can be affected by magnitude flow rate, oil viscosity and gas turbulence. Sometimes in well production when choke size was not designed properly, sudden increase in flow rate occurred and a flow shock was applied to fine particles and the result is probably the problem of fines migration [18]. Whereas fines can also be shocked in work over operations when well is turned on and off repeatedly. Fines migration will occur as far as the flow rate is above the critical velocity, especially for the particles of kaolinite, illite or non-clay fines. Kaolinite is more easily to be mobilized because of its booklet morphology structure [19-23].

Wettability of the formation, fluids phases, and flow rate affect the movement of particles in the pore system. Fines tend to flow depending on their wettability when water is being injected or produced [24-26]. Figure 2 shows the effect of wettability on fines migration. The left scenario shows that fines will only move with the flow of water as water-wet fines are attracted and immersed in the envelop of water. While on the right side, fully or partially oil-wet clay particles are in oil phase and tend to easily migrated with oil flow and severe formation damage can occur. 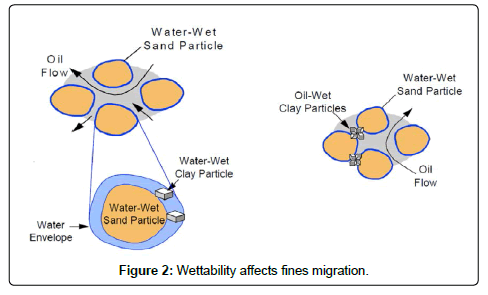 Studies have shown that clay particles become unstable as a result of expansion of lattice space of a clay particle, at smaller than 20 g/l of NaCl or equivalent of interstitial fluid [27,28]. Clay particles are more easily deflocculated and dispersed at salinities of below 1.0 g/l. The negative charge nature of clay particles will attract positive ions to align them around the clay plate. Cations within clay lattice will trade places with cations in water solution. The cations in clay lattice are initially in equilibrium with those in surrounding water. As a result of salinity change, cations exchanged occur and then can cause clay particles to break apart or swell depending on the circumstances. The permeability of formation can be severely damaged as a result of salinity change. This phenomenon can be demonstrated by water shocking experiment.

Once pH value increases dramatically, it will dissolve silica cement to cause more fines and the result can be fines migration [29,30]. The sources for increase of pH value can be from injected mud filtrates, cements or work over fluids or from decrease salinity of in-situ fluids. Lab tests show that generally pH of more than 7 tends to cause fines migration while no disturbance has been observed with pH value of below 4.

Acidizing treatments can de-consolidation of the fines and the excessive dissolution of cementing materials will generate considerably amounts of fines [31]. Under some circumstances, acidizing will not increase the permeability of the formation, instead causing more damage to formation permeability as a result of fines migration. In the near wellbore zone, local wellbore collapse can occur and release of fines will cause more damage.

There are various techniques to address the problems of fines migration. Traditional means are by using retarded HF system, enlargement of pore throat, or application of organosilane additive. In recent years, the application of UTTA has been proved to be very successful in addressing fines migration problems [32].

Under most circumstances, fines migration occurred deep in the formation and any chemical solution must be designed to be functioning retarded as far from the wellbore as possible. Over the past years, three typical retarded HF Systems have been developed [8]. They are systems using the boron ion, systems using the aluminum ion, systems using the phosphorous containing complex. All those systems will produce hydrated silica precipitation in contact with clays. The type I should not be used in the formation containing illite or K-feldspar as it has no reaction with quartz. Type III has the highest dissolving power of silica and clays among those three. It can keep dissolving products in solution without precipitation [33].

As has been discussion above, acidizing treatments have the negative effects of fines migration by simply dissolving cementing materials or creating more fines in the formation. In other ways, acidizing can also enlarge the size of pore throats, especially the critical pore throat size [9]. In this case, an easier flow pathway is created and it is easier for fines to exit out of the formation. Studies show that fines will not bridge near the pore throat if the average pore size of the formation is greater than the critical range (1/7 to 1/3 of the size of average fine). By applying the relationship that pore diameter is equal to the square root of permeability in microns, the following Table 1 can be used to predict the size of fines that can plug the formation.

The mechanism of orgnosilane to control the problems of fines migration is to locks fines in place through a thin coating. It will form silnols in-situ on siliceous mineral surfaces through a condensation/ polymerization process (Figure 3). The coating can stabilize fines and block ion-exchange sites. Therefore, the severity of fines migration is greatly reduced [11-13].

UTTA is firstly applied in fracturing or gravel packing operations. It is used as typical post-treatment following matrix acidizing or acid fracturing treatments [12,33]. The main objective is to demobilize fines so that fines will not migrate with the flowing fluids. Thus it reduces the problems of permeability damage. The mechanism of UTTA is to form a thin film on the formation surfaces that can encapsulate the fines. In the formation, capillary pressure helps pull the tackifier into the contact points. UTTA is applicable in most formations, for example, sandstone reservoirs, carbonates, and coals. The thin film it forms can greatly enhance the ability of formation to withstand high stress in the case of high flow rates [34] (Figures 4 and 5). 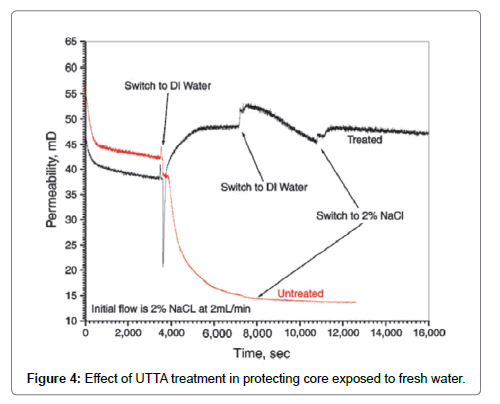 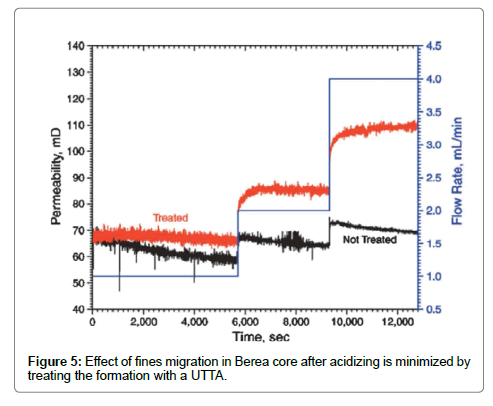 Figure 5: Effect of fines migration in Berea core after acidizing is minimized by treating the formation with a UTTA.

• The newly application of UTTA in controlling fines migration has been very successful because it can be applied in most formations and the thin film it formed can greatly enhance the ability of formation to withstand high flow rate.