Formation of Polyelectrolyte Complexes from Cationic Polyfluorenes and ssDNA

Formation of Polyelectrolyte Complexes from Cationic Polyfluorenes and ssDNA

Trimethylphosphonium-substituted polyfluorenes (PTMPHFs) with controlled molecular weights were synthesized using the Kumada catalyst-transfer polycondensation procedure, and their recognition properties towards various biomolecules were examined. Upon the formation of polyelectrolyte complexes with single stranded DNA (particularly polyadenine and polycytosine), the UV-vis absorption of PTMPHF was red-shifted and its fluo-rescence was quenched.

Conjugated polymers have attracted considerable interest due to their excellent electro-optical properties, good solubility, and high chemical stability [1,2]. Their chemical versatility allows the use of various monomers as building blocks and has led to the development of numerous derivatives with transformable properties applicable to light-emitting diodes, photovoltaic cells, organic field-effect transistors (OFETs), and sensors [3-7]. The modification of conducting polymers by side chain functionalization yields a variety of nanostructures and electronic properties. For example, polythiophene derivatives containing optically active side chains exhibit macromolecular self-assembly to form helical aggregates that exhibit unique optical properties such as circular dichroism (CD) and circularly polarized luminescence in the visible region [8,9]. Emphasis has recently focused on the potential of conjugated polyelectrolytes (CPEs), in which charged groups are incorporated into the terminal positions of the side chains [10-12]. These charges render the CPEs water-soluble and allow molecular recognition. The CPEs also exhibit a strong innate fluorescence and sensitivity to changes in structure and charge distribution. Recently, considerable research has been carried out into cationic conjugated polymers for detecting negatively charged double stranded DNA and multiplex microRNAs through electrostatic interactions [13-16]. Many of these reports describe ammonium-bearing conjugated polymers, but recent reports indicate that phosphonium compounds adsorb more efficiently onto negatively charged compounds and exhibit lower toxicities than the ammonium compounds [17,18]. However, the DNA base selectivity of phosphonium compounds and the dependence of DNA lengths on the sensing activity has not yet been reported. Thus, we herein report the preparation of phosphonium-bearing polyfluorene (PF) derivatives and subsequent investigation into their sensing properties towards DNA. As PF derivatives show strong luminescence [19,20], we expect that changes in fluorescence will be useful for sensing and recognizing biomolecules. We also investigate the effect of polymer length on the sensing properties of the PF derivatives, particularly against DNA comprising specific bases with lengths.

The trimethylphosphonium-substituted PFs (PTMPHFs) were synthesized as shown in Scheme 1. The precursor polymers employed were PFs bearing bromoalkyl side chains, i.e., poly(9,9- bis(6- bromohexyl)fluorene) (PBHF), where the PBHFs were synthesized using the Kumada catalyst-transfer polycondensation (KCTP) method [21]. Catalyst-transfer polycondensation method has been widely used for polythiophene and polyphenylene derivatives [22-24], it is typically difficult to control the molecular weight of the product polymer when polymerizing fluorene monomers with long side chains due to chain transfer and chain termination during the polymerization process. However, a recent study showed the possibility of controlling the synthesis of PFs by tuning the structure of the Ni catalyst ligand [25]. More specifically, they demonstrated that Ni(acac)2 is a better catalyst precursor than NiCl2 for coupling reactions. Inspired by this achievement, we synthesized several PBHFs using Ni(acac)2/dppp as the catalyst. 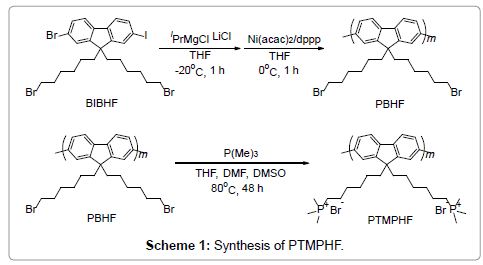 Figure 1a shows the change in Mn against the ratio between the monomer (BIBHF) concentration and the Ni catalyst concentration ([monomer]/[Ni(acac)2]). The obtained PBHFs had a number average molecular weight (Mn) in the range of 6.3-13.0 kg mol−1 and a polydispersity index (PDI) < 1.20. As shown, the Mn values of the obtained PBHF increased almost linearly as a function of [monomer]/ [Ni(acac)2]. These results approximated the calculated Mn values based on the following equation: Mn (cal)=490 × [monomer]/[Ni(acac)2], which assumes that polymerization occurs via a living mechanism. Thus, Figure 1b shows the gel permeation chromatography (GPC) elution curves of the PBHFs obtained upon variation in the [monomer]/[Ni(acac)2] ratios. Upon increasing the degree of polymerization (m) from 12 to 26, the curves shifted towards higher molecular weight regions while retaining a narrow molecular weight distribution. PTMPHF was then obtained by reacting PBHF with trimethylphosphine. The phosphonium conversion ratios of the polymers, as determined by 1H NMR spectroscopy, were 100% and were independent of the degree of polymerization. The obtained PTMPHF polymers were soluble in dimethyl sulfoxide (DMSO) and methanol, and were partially soluble in water. 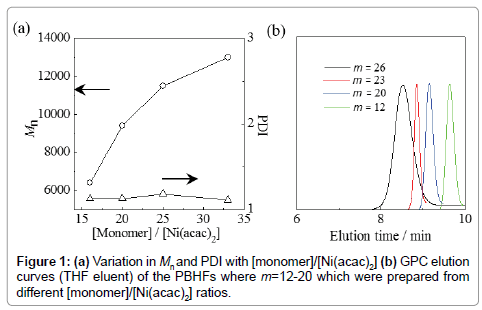 We then conducted UV-vis absorption and fluorescence measurements for PTMPHF (m=26, 5.0 × 10−3 g L-1) in a Tris-HCl buffer solution containing 1 vol% DMSO at pH 8.0. The maximum absorption peak (λabs) of the solution was observed at 413 nm, while the maximum fluorescence was detected at 429 nm upon excitation at 395 nm. Biomolecules (e.g., double stranded (ds)-DNA from salmon sperm and RNA from hula yeast) were then added, and the decrease in fluorescence was monitored (Figure S3). The above process was adopted for single stranded (ss)-DNA with known nucleotide sequences. Figure 2 shows both the UV-vis absorption (Figure 2a) and the fluorescence spectra (Figure 2b) of PTMPHF (m=26, 1.0 × 10−2 g L-1) in a Tris- HCl buffer s(ss)-DNA (i.e., with different degrees of polymerization (n=5, 10, 15, 20, 25, and 30)) on the sensing properties of PTMPHF. Here, poly(C)n was selected for (ss)-DNA, which are sensitive to PTMPHF. Figure 3 shows the DNA concentration dependence on (a) the maximum absorption peak, λabs, and (b) the ratio of fluorescence intensity (I/I0) at 429 nm upon excitation at 395 nm of PTMPHF (m=26, 1.0 × 10−2 g L-1) after addition of poly(C)n in a Tris-HCl buffer solution containing 1 vol% DMSO at pH 8.0. Here, I0 and I are the fluorescence intensities before and after addition of the poly(C)20. The upper x-axis P-/P+ means the ratio of negatively charged (ss)-DNA phosphates (P-) to positively charged phosphonium polymer cations (P+). The molar mass of a PTMPHF unit including the two bromide counter ions equals to 642 g mol-1, and the concentration of PTMPHF in Figure 3 equals to 1.56 × 10 μM. Because of the cation sites in the unit of PTMPHF is two, the concentration of P+ is 3.12 × 10 μM. This means that the equivalent charge point, where the P-/P+=1, occurs at poly(C)20 concentration of 1.56 × 10 μM. As shown in Figure 3a, when the poly(C)20 concentration was lower than 0.5 μM, the λabs of PTMPHF was not changed. When the concentration of poly(C)20 was over 0.5 μM, that is the P-/P+ was over 0.32, λabs drastically shifted to long wavelength region. The λabs became constant over P-/P+=1.25, suggesting that anion of poly(C)20 and cation of PTMPHF fully interacted. As for the fluorescence data (Figure 3b), the I/I0 values changed at a lower poly(C)20 concentration than the value that the shift of λabs was observed. The I/I0 value became constant over P-/P+=1.25. These data reveal that the range of DNA detection can be achieved by combination of the absorption and fluorescence data. 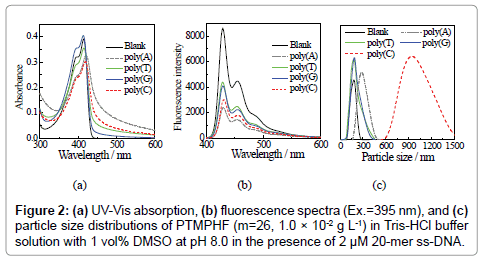 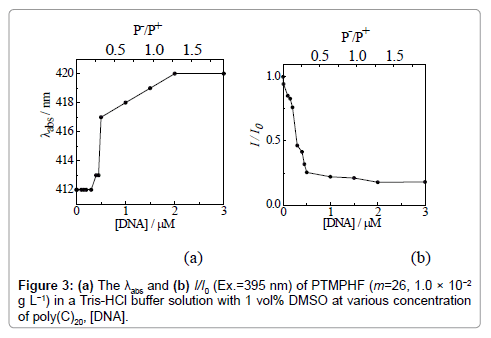 Figure 4a shows the λabs and I/I0 values at 429 nm upon excitation at 395 nm of PTMPHF (m=26, 1.0 × 10-2 g L-1) in the presence of 2 μM poly(C)n with various polymerization degree n in a Tris-HCl buffer solution containing 1 vol% DMSO at pH 8.0. Here, blank means pure PTMPHF solution. As indicated, the λabs of PTMPHF was red-shifted only in the presence of 10-20-mer poly(C)n, suggesting that these lengths of poly(C)n are suitable for complexing with PTMPHF and extending the effective π-conjugated length of PTMPHF. The decrease in fluorescence intensity upon the addition of poly(C)n was chain length dependent, and large decrease was occurred with addition of the 10- 20-mer poly(C)n. Figure 4b shows the particle sizes of PTMPHF in the presence of poly(C)n, which were determined by the dynamic light scattering measurements. The particle size of PTMPHF increased in the presence of 10-20-mer poly(C)n, indicating a correlation among the change of particle size, λabs, and fluorescence intensity. This phenomena might be based on the following idea. The positively charged PTMPHF aggregates were coated by the anionic poly(C)n. A same concentration of poly(C)n, a small n results in little coverage of the PTMPHF aggregates. That is, poly(C)n with n=5 promotes no further aggregation of PTMPHF. Therefore the λabs and fluorescence were not changed. By increasing n to 10, a patchy coverage of the PTMPHF aggregates with poly(C)n that promotes the aggregation into bigger polymeric aggregates. Because of the aggregation, the extension of effective conjugation length was occurred and the λabs were red-shifted. A further increase in n results in the encapsulation of PTMHF by poly(C)n which prevents further aggregation as observed for n=25 and 30. These results suggest that sensing by PTMPHF is dependent on the chain length of poly(C)n and that the balance of chain length of PTMPHF. 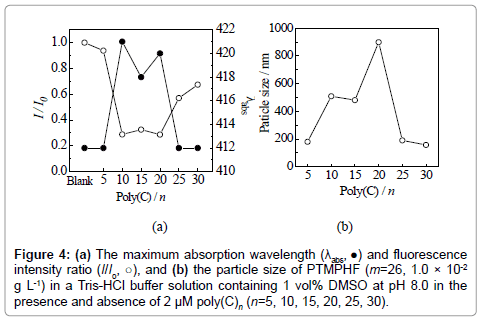 In conclusion, we herein demonstrated that trimethylphosphoniumsubstituted polyfluorene (PTMPHF) with a controlled molecular weight was successfully synthesized using the Kumada catalyst-transfer polycondensation procedure. We also found that the prepared PTMPHF interacts successfully with single stranded (ss)-DNA, where the sensing properties of this polymer are dependent on the nucleobase sequence examined and on the length of the DNA molecules. Indeed, significant aggregation was observed for the complex formed between PTMPHF and the 10-20-mers of poly(C)n. These results suggest that the prepared polymer may be suitable for application as a biomolecule sensor. The detailed effects poly(A)n and poly(C)n addition are currently being investigated further, and the results will be presented in future publications.

Materials, Synthetic procedures, characterization of polymers, and other experimental data.

This work was funded by the Tokuyama Science Foundation, Japan.

Copyright: © 2017 Sato T, et al. This is an open-access article distributed under the terms of the Creative Commons Attribution License, which permits unrestricted use, distribution, and reproduction in any medium, provided the original author and source are credited.