Formulation of the Tazarotene Cutaneous Gel and Its Physicochemical Characteristics

Formulation of the Tazarotene Cutaneous Gel and Its Physicochemical Characteristics

Tazaroten is one of the most effective and the most applicable dermal medicine in treatment of two mentioned diseases that available in form of gel, cream and foam. This agent is one component of vitamin A derivatives and it is a selective receptor of acetylene retinoid that binds to beta and gamma retinoid acid receptors.

The purpose of this study is formulation of cutaneous gel of Tazarotene 0.1% that is not available in the internal market of medication in Iran.

So, first the basics of medicine prepared after changing in several stages of amounts and proportions of primary materials and the effective agent added to better formulation after related stability tests. Then the stability of the formula evaluated in terms of clarity, pH, lack of two phases in temperature of 4°C, 25°C and 40°C as well as viscosity, and the best formulation was selected in terms of stability. Then the tests of determination of the effective material amount in wavelength 351 nm was performed by method of spectrophotometer and HPLC, release of medicine in plasmatic membrane and dermal absorption in the medium of acetate ammonium buffer with pH=6.5 and 10% acetonitrile on the final formulation.

The final formulation contained 85% effective material that was in the optimal range in terms of releasing and dermal absorption, while adhere to Higouchi kinetics model.

Tazarotene is a third-generation retinoid which is effective for topical treatment of psoriasis and acne vulgaris and has cosmetic benefits for photoaging [1].

However, there are adverse effects accompanied with its use where local cutaneous irritation including burning, itching, erythema, peeling or dryness occurs in approximately one-quarter of patients using tazarotene [2].

In comparative trials 0.1% tazarotene gel demonstrated the highest irritation score followed by tazarotene cream compared to different concentration of tretinoin cream (Thielitz). In a recent study, tazarotene foam 0.1% was found to be an alternative to tazarotene gel with less systemic exposure (Jaratt). Therefore, the development of new effective topical drug delivery system intended to modulate tazarotene release rate, enhance its localization in the skin and reduce its percutaneous absorption might minimize its adverse effects and could be of particular usefulness.

Dermal safety studies also indicated that TZR did not show phototoxic or photoallergic potential [3]. However, mild to moderate local cutaneous irritation, with burning, itching, erythema, peeling, and/or dryness, was observed in approximately 25% of treated patients. So, it is necessary to improve the topical delivery and reduce the adverse effects of TZR using a carrier with the ability of skin targeting. A literature survey revealed a high-performance liquid chromatography (HPLC) method for determination of TZR and its major active metabolite with mass spectroscopy [4].

Isocratic RP-HPLC method with UV detection has been described for quantitative and related substance determination of TZR.12 However, HPLC-based separation methods may not be suitable for the determination of the drug from lipid-based delivery systems such as ME formulations.

The formulations contain various lipophilic excipients that are not soluble in commonly used organic solvents used in RP-HPLC methods. Further, extraction of the drug from such lipophilic excipients may not be achieved easily, and such excipients may get adsorbed on stationary phase. Hence, analysis of TZR, particularly from lipid-based delivery systems, would be difficult with respect to identification of suitable solvents and stationary phases [5].

Tazarotene is a retinoid prodrug which is converted to its active form, the cognate carboxylic acid of tazarotene (AGN 190299), by rapid deesterification in animals and man. AGN 190299 (“tazarotenic acid”) binds to all three members of the retinoic acid receptor (RAR) family:

RARα, RARβ, and RARγ but shows relative selectivity for RARβ, and RARγ and may modify gene expression. The clinical significance of these findings is unknown.

Psoriasis: The mechanism of tazarotene action in psoriasis is not defined. Topical tazarotene blocks induction of mouse epidermal ornithine decarboxylase (ODC) activity, which is associated with cell proliferation and hyperplasia. In cell culture and in vitro models of skin, tazarotene suppresses expression of MRP8, a marker of inflammation present in the epidermis of psoriasis patients at high levels. In human keratinocyte cultures, it inhibits cornified envelope formation, whose build-up is an element of the psoriatic scale. Tazarotene also induces the expression of a gene which may be a growth suppressor in human keratinocytes and which may inhibit epidermal hyper proliferation in treated plaques. However, the clinical significance of these findings is unknown [6].

Acne: The mechanism of tazarotene action in acne vulgaris is not defined. However, the basis of tazarotene's therapeutic effect in acne may be due to its anti-hyper proliferative, normalizing-ofdifferentiation and anti-inflammatory effects. Tazarotene inhibited corneocyte accumulation in rhino mouse skin and cross-linked envelope formation in cultured human keratinocytes. The clinical significance of these findings is unknown.

The aim of this study was to provide a gel formulation of tazarotene %1.

Materials used in this research are: Carbomer 934, poloxamer 407, PEG 400, Phenytoin 80 (polysorbate 80), BHT, NaEDTA, Triethanolamine, Acetonitrile, Ammonium acetate and Tazarotene. The different levels of the gel were made by using Carbomer 934. Then, each of the basic physical properties, consistency, uniformity and stability was evaluated and the best base for the gel formulation was selected. In the next step and during the constructing the amount of tazarotene % is added to the base.

In order to manufacture of base, in addition to the Jelifan (Which is essential for gels manufacturing), the two materials were water and for cleaning and poloxamer 407.

Control tests on the base were

• The test on the cutaneous spreading

• Expansion of the ternary diagram in the project area in order to achieve better formulations.

At this stage, the gel re-tested and finally we achieved 14 appropriate formulations. After finding better formulations, it is time to Adding other oxipants. Additional tests on final formulations were:

• Evaluation of Tazarotene releasing from basic gel by using plasma membrane in formulations 65 and 74.

• Study and statistical analysis of the test which results obtained from the process of active ingredients releasing relating to Tazarotene 1/0% gel.

• Determination of the viscosity and rheological behavior.

• The test to determine the amount of active ingredient of the Tazarotene gel by using HPLC in formulations 65.

Firstly, in order to ensure the active ingredient, it was proceeded to take FTIR absorption spectrum. After building the bases of all three regions of the diagram was created:

The overall result is that when low levels of Carbomer 934 higher levels of the used water, the gel is not formed. On the other hand, the percentage of Carbomer 934, reduction in poloxamer 407 and also in the amount of water creates products with high turbidity.

After studying the physical properties of the gels, reached the 14 best formulation. Due to the similarity of approximate amount of the Carbomer 934 we attempted to make 3 formulations 49, 65 and 74.

The results of thermal stability

In all three formulations (during 6 months of storage at a temperature of 4, 25 and 40), no change to production phase, change in the color and consistency it was created (Table 1).

Table 1: The ratio of materials used in three final formulation.

Table 2: Compare the morphological characteristics in formulations 49, 65 and 74.

As seen in the above table, all three formulations are suitable in terms of transparency. However, in terms of consistency, the consistency of the formula 49 is lower than the other two formulations, due to the less of the Carbomer in the base. In terms of pH of formulations 65 and 74, pH has more compatibility with the skin.

The results of stability tests by centrifugation

In centrifugal testing on samples after 15 minutes, no change was observed among phase. The results of the tests which determine the amount of active ingredient in the formulations 65 and 74 by using spectrophotometry.

The results of the standard diagramming are as follows (Table 3):

Table 3: Absorbed Tazarotene in the concentrations of methanol at a wavelength of 351nm, (n=3).

Tazarotene calibration curve based on the values of absorption are as follows:

Table 5: Comparing the concentration of active ingredient in the formulation of 65 and 74.

The results of the liberalization process of the gel formulations 65 and 74 were analyzed by Paired- samples T test. 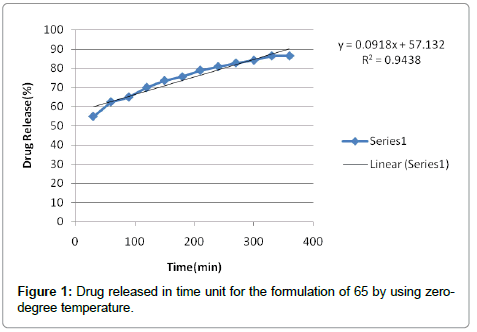 Figure 1: Drug released in time unit for the formulation of 65 by using zerodegree temperature. 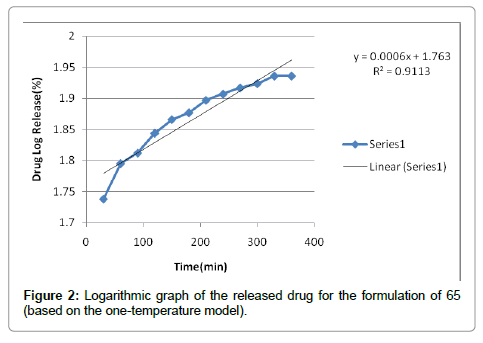 Figure 2: Logarithmic graph of the released drug for the formulation of 65 (based on the one-temperature model). 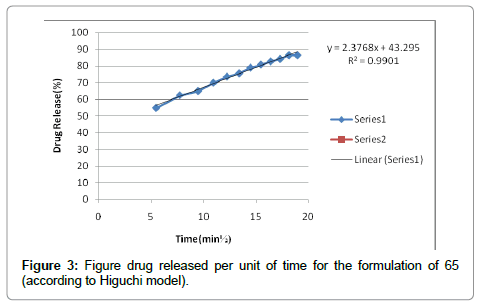 Figure 3: Figure drug released per unit of time for the formulation of 65 (according to Higuchi model). 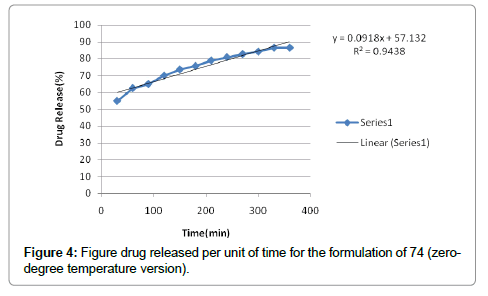 Figure 4: Figure drug released per unit of time for the formulation of 74 (zerodegree temperature version). 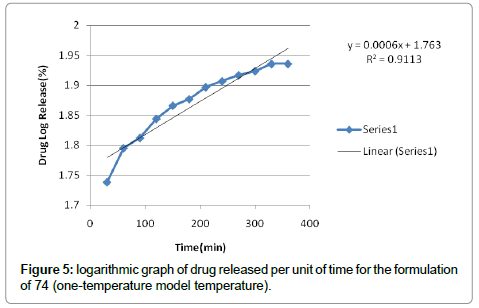 Figure 5: logarithmic graph of drug released per unit of time for the formulation of 74 (one-temperature model temperature). 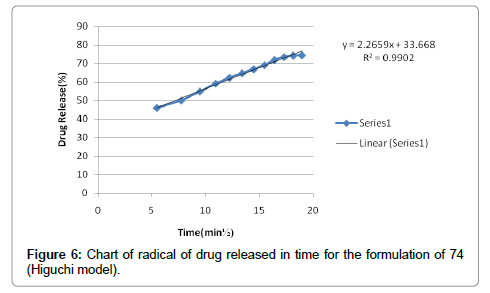 Figure 6: Chart of radical of drug released in time for the formulation of 74 (Higuchi model).

Table 6: The results of the drug release pattern of plasma membrane in Formulation 65.

According to the test results release formulation, formulation 65 was selected as the chosen formulation. Based on regression analysis, charts followed Higuchi model, because its regression to the nearest mode (Figures 7-9). 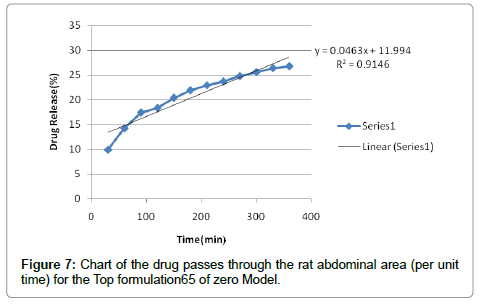 Figure 7: Chart of the drug passes through the rat abdominal area (per unit time) for the Top formulation65 of zero Model. 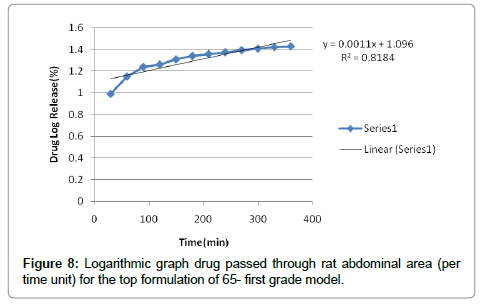 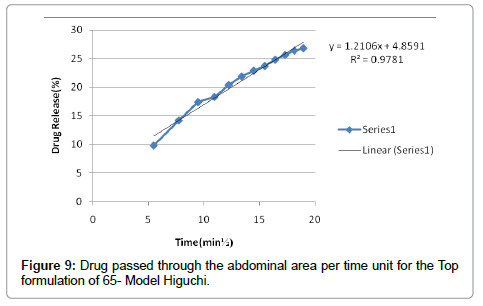 Figure 9: Drug passed through the abdominal area per time unit for the Top formulation of 65- Model Higuchi. 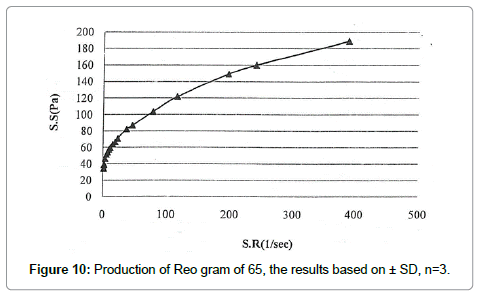 Tazarotene a retinoid drug that is already active form of D-esterification quickly becomes tazarotenic acid (which can be connected to all three of the retinoic acid receptors: RARα, RARβ, RARγ). It also selectively responds binds to the β and γ receptors.

Copyright: © 2020 Taheri T, et al. This is an open-access article distributed under the terms of the Creative Commons Attribution License, which permits unrestricted use, distribution, and reproduction in any medium, provided the original author and source are credited.