Copyright: © 2015 Venkataram, et al. This is an open-access article distributed under the terms of the Creative Commons Attribution License, which permits unrestricted use, distribution, and reproduction in any medium, provided the original author and source are credited.

Port wine stains are genetic malformations which produce emotional and social problems and are of significance to a patient and also a dermatologist. Pulse dye lasers (585 nm) are the treatment of choice for this condition. There are reports of other lasers that have been tried with varying results. Here, we present a case of port wine stain treated with fractional ablative Erbium-YAG laser which showed significant clearance of the lesion in color and thickness thereby decreasing morbidity and enhancing cosmetic improvement.

Port wine stains are low flow malformations of skin [1]. They can be congenital or acquired. They do not involute with time; instead they develop nodularity and hypertrophy [2]. If they are not treated they can progress in size [2]. The 585 nm PDL is supposed to be the most safe and most effective treatment for this condition [1]. To our knowledge there is no report on the use of ablative fractional Erbium-YAG laser for the treatment of port wine stain. Here, we present a case of port wine stain treated with ablative fractional Erbium-YAG laser which showed significant clearance.

A 27 year old male patient presented to our centre with a patch on the right side of angle of mouth extending to the right lower lip and inner lip mucosa. The lesion was erythematous, ill defined, 7 × 5 cm patc (Figure 1). It was present since birth, light pink in color and gradually increased in color and size after adolescence. The patient had tried various bleaching agents but to no avail. He was advised to undergo laser treatment with fractional ablative laser. After explaining to him about the nature of his condition, treatment options, possible side effects and outcomes, an informed consent was taken. The patient was counseled on the need for multiple sessions and asked to come after every three weeks. Subjective analysis was done clinically and by patient satisfaction score. Objective analysis was done with photography. The area was cleaned. Topical anesthetic was applied for a period of 20 minutes to minimize pain. Patient’s eyes were protected. A fractional ablative laser (Harmony, Alma Lasers Ltd, India, wavelength 2940 nm) was used for treatment using long pulse, with 49 matrices, starting at an energy of 900 mj and 6 stacking. After 3 weeks the patient was assessed and he reported to have an improvement of 20% (Figure 2). The clinical satisfaction score was found to be 25%. The energy was kept the same and the stacking were increased to 8 in the second session. After 3 weeks the patient was asked to follow up and assessed. There was an improvement of 30% seen (Figure 3). The energy was increased to 1200 mj with 8 stacking and at the end of three weeks again assessed. There was an improvement of 40% noted (Figure 4). We were able to detect a 45% improvement in the patient’s condition. There were no side effects noticed with this patient. 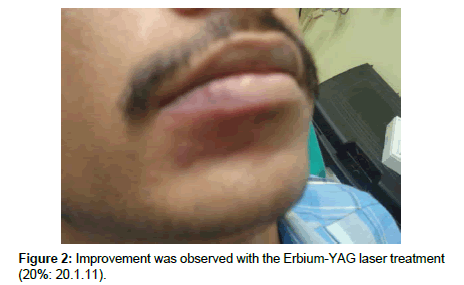 Port wine stains are low flow malformations of skin. They consist of superficial and deep capillaries in the skin. They are red to purple in color and so referred to as port wine. They usually appear in infancy and can persist into adulthood. They appear light pink in infancy after which they become dark red and increase in thickness [2]. They are usually genetic associated with RASA1 gene. They are very rarely acquired and due to trauma. They are found to be associated with syndromes like sturgeweber and klippel-trenenway. They are very disfiguring and associated with psychosocial problems [3]. Hence it poses as a cosmetic problem.

Various treatment modalities have been tried for this condition. The erstwhile treatment options include freezing, surgery, radiation, tattooing and cosmetics. Lasers have the biggest impact on treatment of this condition since they destroy capillaries. The flash lamp pulsed dye laser (595 nm) is the most successful of them all [4]. For treatment resistant port wine stains, other lasers have been used which include Nd: YAG laser [5], Intense pulse light (IPL) [6] and continuous wave CO2 laser [7].

The port wine stain responds no uniformly [8] to lasers since they are made of blood vessels which are at different depths [9] and since the blood flow rate through blood vessels differ [10]. The results also vary with site, size, vessel thickness and color of lesions. Small lesions clear better. Lesions on head, neck and proximal extremities respond better. Pink lesions take longer to lighten than mature red lesions [5]. The PDL resistant cases are treated with long pulsed millisecond 1064 nm Nd: YAG especially the purple colored lesions [11,12]. Nd: YAG lasers are limited to nodular, hypertrophic lesions [12]. The IPL is useful in deep purple and nodular lesions [13,14]. Continuous wave CO2 lasers used for treatment of nodules and hypertrophy [7]. Dual 595 nm and 1064 nm is found to improve recalcitrant PWS [15].

Fractional lasers have been used to treat dermal vessels. There are two hypotheses behind this. Fractional laser mainly targets water which is one of the main components of blood vessels leading to fractional photo thermal microvascular destruction [16]. The other hypothesis is that the MTZ’s in dermis can directly hit the dermal vessels [17] Laubach and colleagues were able to histologically demonstrate damage to dermal vessels [18]. Our patient had come with a port wine stain since birth with no improvement using conventional bleaching agents. With fractional Erbium-YAG laser his condition had improved to a good 45% with no side effects.

They can be associated with various complications especially fractional ablative lasers. Transient effects include mild erythema, edema and peeling [19] Aggressive use produces petechiae, persistent pigmentation, acneiform eruption, bacterial infections, cicatricle ectropion and hypertrophic scarring [20-24]. The patient in concern did not develop any such complications.

Thus fractional ablative Erbium-YAG laser is found to be a safe, effective modality which offers some clearance of port wine stains and they can be used as an alternative treatment option in the absence of a PDL. Further larger, comparative studies are required to establish the effect of fractional ablative lasers in the treatment of port wine stains.