Copyright: © 2016 Khalid M, et al. This is an open-access article distributed under the terms of the Creative Commons Attribution License, which permits unrestricted use, distribution, and reproduction in any medium, provided the original author and source are credited.

Gastric emphysema (GE) is a rare radiological finding; Only 41 cases have been reported in literature between 1889-2003. During our review we found 22 cases that are reported in the last decade. The difficulty to differentiate GE from Emphysematous gastritis – which entails a more malignant course, poses a challenge to the clinicians in management. To our knowledge this is the first case of gastric emphysema presenting with chest pain and vomiting. We present a case of a diabetic woman whom presented with chest pain found vomiting and admitted initially as a cardiac case. Later on her admission she was found to have gastric emphysema. She was treated conservatively and had a full recovery.

A 46 years old female with history hypertension, type 2 diabetes mellitus and congestive heart failure, brought to our emergency room complaining of chest pain, nausea and vomiting. She was initially admitted to the telemetry unit and underwent cardiac catheterization, which showed patent coronaries. She continued to have vomiting and lower chest pain and epigastric pain. Her vitals were stable, without acute abdomen. Blood analyses showed mild hypokalemia and acute kidney injury with blood creatinine of 1.6, but were normal otherwise.

The plain abdominal X-ray showed air in the lateral wall of the stomach (Figure 1), subsequently a computed tomography (CT) scan with oral contrast documented the same finding (Figures 2 and 3). Her history was negative for neither previous esophagogastroduodenoscopy (EGD) nor nasogastric tube insertions and she denied any ingestion of caustic agents. 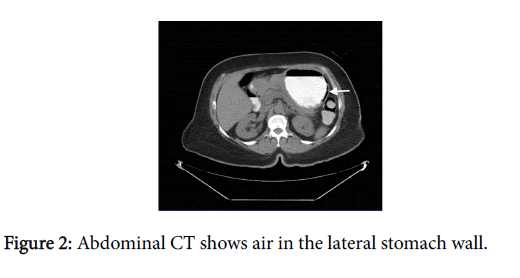 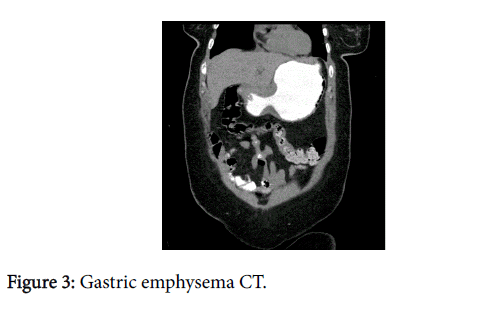 She was placed on Nil per oral (NPO), and she was managed with intravenous proton pump inhibitors and-after drawing blood culturesbroad- spectrum antibiotic (Piperacillin-Tazobactam). Her symptoms dissipated and her acute kidney injury resolved with adequate hydration. She was monitored closely. And EGD was done and revealed gastritis, but was otherwise normal. 48 hours later her repeat abdominal X-ray was normal. She tolerated diet normally and was discharged in a good condition.

Fraenkel first described presence of air in the stomach wall in 1889 [1], while the radiological diagnosis was first made by Weens in 1946 [2].

This condition is a radiological diagnosis and diagnosed retrospectively based on radiology finding rather than disease that has set defined clinical criteria for neither suspicion nor diagnosis. The literature did not show a specific age, race or ethnic distribution.

It entails two divergent diagnoses, Emphysematous Gastritis (EG), a serious medical condition with an estimated mortality rate of around 61%, and Gastric Emphysema (GE), a more benign entity that usually resolves with medical management and observation alone [3-5].

Computerized tomography is the golden method of diagnosis as it documents the presence of air in the gastric wall and thickening of the wall might be seen; [8,9] however, a plain X-ray can detect presence of air as well [2].

Up to date there is no consensus on a subjective method to differentiate the two conditions as they present with the same radiological findings.

However, a retrospective study concluded that lactic acidosis, creatinine and white blood cell count can be used as predictors for poor prognosis [10]. In our case the elevated creatinine was not associated with adverse outcomes, which concurs with a similar published case [11]. GE in diabetes, even in the presence of delayed perforation in one case, appears to be associated with favorable outcomes with conservative management [11-13].

Due to the rarity of this presentation, there are no clear guidelines for management. Non-surgical management has been carried successfully for some cases of mechanical GE. A reasonable approach is to start broad-spectrum intravenous antibiotic coverage, supportive management along with bowel rest [14]. Frequent physical exams, monitoring of vital signs and labs including lactic acid is a key tool to guide the management.

In patients who do not respond to conservative management, develop signs of peritonitis or show evidence of ischemia, partial or total gastrectomy should be considered [15].

Due to the rarity of the condition, there has not been any study to report the outcome, however in the reviewed literature there was no reported mortality with gastric emphysema.  A retrospective study by Morris et al. [16] included 97 patients with intestinal pneumatosis, 46% involving colon, 27% small bowel, 14% affecting the whole gastrointestinal tract including the portal venous system, 7% small bowel and colon, and 5% located on the stomach; they reported a mortality of 16% in the group who received surgical treatment contrasting with a 6% mortality rate reported for the group who received conservative treatment. In stable patients a clinical improvement or resolution of the emphysema within 72 hours has been reported with the use of nasogastric catheter for decompression [17].

We presented a case of a 46 years old woman with Type 2 diabetes, whom presented with chest pain as a manifesting symptom for emphysematous gastritis. We suggest considering GE as a deferential diagnosis, especially in the presence of gastroparesis.