Gastric Teratoma during Infancy: Report of 2 Cases and Review of the Literature

Copyright: © 2016 Dutta HK, et al. This is an open-access article distributed under the terms of the Creative Commons Attribution License, which permits unrestricted use, distribution and reproduction in any medium, provided the original author and source are credited.

Gastric teratoma is a very rare tumour during infancy and childhood, usually benign and predominantly affects males. We present two infants, one male and a female, 7 and 6 months of age respectively, who presented with distension of the upper abdomen with palpable mass. The 2nd child had feeding problem for 2 days. Imaging studies showed both the tumours arising from the posterior walls of the stomach. In both the patients, the tumours could be completely excised. The histology had shown features of mature teratoma. Both the children are on regular follow up for 12 months and 36 months, respectively and are doing well.

Gastric teratomas are rare tumours in infants and children and constitute less than 1% of all teratomas occurring in children [1,2]. Most of the cases occur in males. We report two infants, one female and a male who presented during infancy with exophytic growth from the posterior walls of the stomach, which turned out to be gastric teratomas. In both the cases, the tumours could be excised completely without having to open the stomach.

A 6 month old female child presented with distension of abdomen with a lump for 2 weeks and feeding problem for 2 days. The lump was increasing in size gradually. On examination, the abdomen was distended with a palpable firm mass in the epigastric region. The mass had little mobility. Imaging studies showed a predominantly solid mass, 7 cm × 8 cm in size in the gastro hepatic omentum (Figure 1). 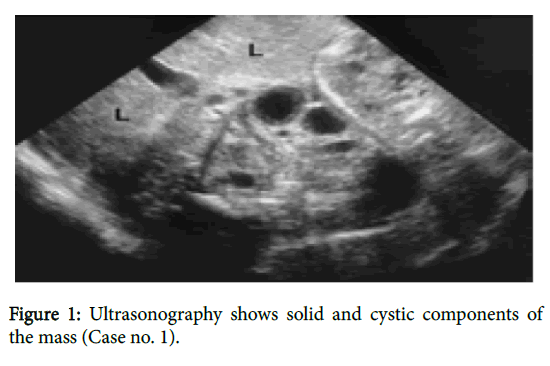 Figure 1: Ultrasonography shows solid and cystic components of the mass (Case no. 1).

On exploration, the mass was found to arise from the lesser curvature and the posterior wall of the stomach (Figure 2). Figure 2: The tumour delivered into the wound after opening the gastro hepatic omentum (Case no. 1).

It was nodular in appearance with cystic and predominantly solid components (Figure 3). Figure 3: Indicates cut section of both the tumours.

There was no enlarged regional lymph node or involvement of other viscera. The mass was excised in-toto along with portion of the seromuscular layer of the stomach but sparing the mucosa. The stomach wall was repaired. The patient was put on intravenous fluid and nasogastric aspiration for 3 days, after which oral feed was allowed. The patient recovered well and discharged from the hospital on day 6. The histology showed elements of three germ cell layers with presence of neuroglial tissue suggestive of mature teratoma (Figure 4). The patient has been on follow up for 36 months and is doing well.

A 7 month old male infant presented with abdominal distension and a palpable mass in the upper abdomen for 3 weeks that has progressively increased in size. The patient had non-bilious vomiting for 1 day. Examination revealed a large, firm, non-tender and nonmobile mass with irregular surface, occupying the left hypochondrium and epigastric region. Biochemical parameters and age-related serum alpha fetoprotein (AFP) levels were within normal limits. Imaging studies revealed a mixed echogenic mass attached to the posterior wall of the stomach with solid and cystic areas and fat attenuation with central and peripheral nodular calcification, suggestive of teratoma. The mass was excised in-toto along with some portion of neuromuscular layer of the stomach while sparing the gastric mucosa and the defect was repaired. Cut section showed solid tissue of greyish white areas with foci of cartilage and bone. Histopathology revealed presence of dermal appendages, hair follicle, stratified squamous epithelium, mature glial tissue, adipose tissue, bone and cartilage suggestive of mature gastric teratoma. The post-operative recovery was uneventful and the patient was discharged on 10th post-operative day. The child has been doing well with normal level of age-related serum alpha fetoprotein at one year follow up.

Gastric teratomas account for approximately 1% of the pediatric teratomas[1]. Teratoma in the sacrococcygeal region is the commonest tumour in neonates. Other common locations of teratomas in neonates and infants are gonads or the mediastinum [2]. Gastric teratomas usually occur in males and only less than a dozen female children with this tumour have been reported [1,3,4].

Common presentation in neonates and infants are lump abdomen, feeding problem, and rarely bleeding. Large teratomas can cause maternal polyhydramnios and premature labour or dystocia. Both our patients presented with lump and distension of the abdomen with feeding difficulty or vomiting.

Gastric teratomas are mostly exophytic; hence, a palpable lump may be an early feature than vomiting. These tumours mostly occur on the lesser curvature of the stomach, antrum and fundus along the posterior wall. Some gastric teratomas can be pedunculated [5,6]. Both the cases in the present report had exophytic growths arising from the posterior wall of the stomach, one from the lesser curvature side and the other mostly from the greater curvature.

Preoperative diagnosis of gastric teratomas is difficult. Imaging studies demonstrate a mass with solid and cystic components. There may be internal calcifications. With contrast (both intravenous and oral) enhanced CT scan, the tumour’s origin and relation with adjacent viscerae and blood vessels, as well as presence of metastasis can be confirmed [7]. Barium meal and gastroscopy have limited role in the diagnosis of gastric teratoma [8].

Diagnosis of teratoma rest on finding derivatives of all three germ layers on histology. When the tumours contain only two germ layer derivatives, the tumour is more appropriately termed as dermoids [7]. A gastric teratoma can be termed as mature or immature depending on differentiation of the neuroglial tissue in it. When the tumour contains mature glial tissue along with other derivatives of the germinal layers, these can be considered as benign tumours. Malignant tumours contain immature neuroepithelial tissue, and the malignant components may be endodermal sinus tumour (EST), yolk sac tumour or choriocarcinoma [3,9,10]. Only two cases of malignant gastric teratomas have been reported so far in the English literature [10]. Parvin et al. reviewed 7 of their own cases over a period of 15 years and found immature elements in 2 cases. One of these cases had immature renal and pulmonary tissues in the tumour [11]. Hassan et al. reported mature gastric teratoma in a 2 month old male infant, which was successfully excised [12]. The tumour was present since birth and was rapidly expanding to occupy the whole abdomen. An antenatal ultrasonography in such cases could detect the lesion early, making the management easier. Zhou et al. retrospectively analysed 2 cases of fetal gastric teratoma; however, both these cases were aborted and the final diagnosis was made on pathological examination [13].

Patients with gastric teratomas, irrespective of histological features and invasion of adjacent organs have an excellent prognosis [5,6,9,10]. Complete surgical resection of the tumour is usually curative and sufficient; recurrence results from incomplete excision. Adjunctive therapies have no role [14]. Regular follow up of these patients with periodic serum AFP estimation is recommended. Both our patients had normal level of AFP for their ages at the time of presentation and at last follow up.