Gastric Ulcer in a Patient with Percutaneous Endoscopic Gastrostomy

Copyright: © 2014 Erdogan EI, et al. This is an open-access article distributed under the terms of the Creative Commons Attribution License, which permits unrestricted use, distribution, and reproduction in any medium, provided the original author and source are credited.

A 83 year old male patient with alzheimer's disease was admitted to our hospital with melena. Percutaneous endoscopic gastrostomy (PEG) feeding tube had been placed 3 weeks previously at another institute because of a diagnosis of aspiration pneumonia. The patient did not take any gastrotoxic medications during the last 3 weeks. The hematocrit level was 30%. Esophagogastroduodenoscopy (EGD) revealed no bleeding source, but a hyperemic mucosal area near to the internal PEG bumper. Loosening the external clamp and advancing the PEG tube into the stomach lifted the internal bumper away from gastric mucosa. After this maneuver, a gastric ulcer with a visible vessel was seen underneath the internal PEG bumper (Figure 1a). Endoscopic injection therapy was performed with epinephrine (1:10000 dilution) and polidocanol (1%). The patient received parenteral proton pump inhibitor therapy for 5 days. Histopathological examination of the biopsy samples that were taken from the ulcer side excluded a malignant gastric ulcer. Internal bumper was not pulled, in contrast, retained 3-4 cm away from the gastric mucosa for 2 weeks without any feeding problem via the PEG. Repeated EGD after 6 weeks revealed the complete healing of the ulcer (Figure 1b). There exist many causes of upper gastrointestinal (GI) hemorrhage after PEG such as the puncture of a blood vessel during the procedure, traumatic erosions of esophageal or gastric mucosa, reflux esophagitis, and gastric ulcer [1]. Upper GI hemorrhage was detected in 17 (4.1%) of a total of 416 patients who underwent PEG, and reflux esophagitis was found to be the most frequent reason [2]. Gastric ulcer is a very rare cause of upper GI hemorrhage after PEG. In a study by Kanie et al., gastric ulcers were found in nine of the 92 patients with PEG, and in all nine the ulcer was found on the posterior wall of the gastric body, where the tip of the PEG tube was attached [3]. We present a case with ulceration as an upper GI hemorrhage which was hidden beneath the PEG bumper. This case shows that; (1) tight internal PEG bumper may cause gastric pressure ulcer probably due to mucosal ischemia, (2) advancing the PEG tube into the stomach to lift the internal bumper away from gastric mucosa may be useful to see pressure ulcer especially when a bleeding source cannot be found during EGD, (3) internal PEG bumper should not contact with gastric mucosa for several weeks to maintain the ulcer healing, (4) internal PEG bumper should finally be placed gently in order to avoid possible pressure ulcer recurrence. 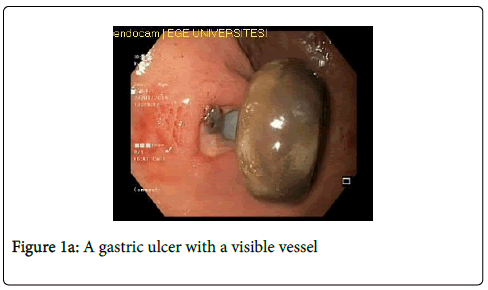 Figure 1A: A gastric ulcer with a visible vessel 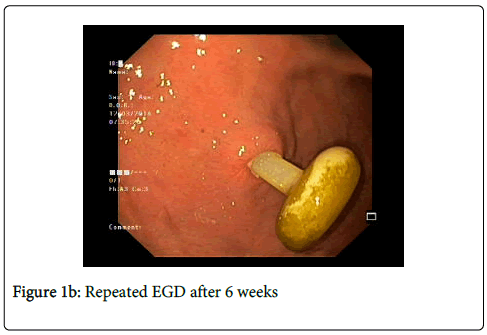 Figure 1B: Repeated EGD after 6 weeks