Copyright: ©2015 Mahanty A, et al. This is an open-access article distributed under the terms of the Creative Commons Attribution License, which permits unrestricted use, distribution, and reproduction in any medium, provided the original author and source are credited.

GC-MS is an important instrument in lipid profiling and lipid biomarker identification. The choice of columns and detectors is important in analysis and identification of the biomolecules. In the present study, GC-MS fingerprinting of fatty acids (FAs) in different tissues of freshwater mollusc Lamellidens marginalis was carried out in GC-MS with two different columns, TR-FAME and TR-WaxMS, to examine if choice of columns and detectors influence the identifications of the lipids. These sentinel organisms are used in aquatic pollution monitoring studies as they accumulate toxic environmental contaminants to levels well above those present in the surrounding environment thus providing information on the spatio-temporal pollution trends. FAs identified in different tissues include the saturated FAs palmitic acid (C16:0), margaric acid (C17:0), stearic acid (C18:0), monounsaturated FAs (MUFAs) oleic acid (C18:1), eicosenoic acid (C20:1) and polyunsaturated fatty acid (PUFAs) linoleic acid (C18:2). More numbers of FAs were detected in TR-FAME column than TR-WaxMS column. Several non-fatty acid compounds like butylated hydroxyl toluene (BHT) and dibutyl phthalate were also identified in the FAME (fatty acid methyl ester) preparation using NIST (MS) library. It was interesting to note that the FA peaks (6/14) were outnumbered by the non-fatty acid peaks (8/14). Such compounds could be taken as unidentified FAs unless powerful detectors like MS are available and can lead to erroneous inferences. The study showed that the choice of columns and detectors influenced the identification of the compounds. The information generated on fatty acid profiles of this bivalve could serve as baseline data for this species in searching for lipid biomarkers for aquatic pollution monitoring studies.

The freshwater molluscs form an important part of the aquatic ecosystems. These sentinel organisms are used in aquatic pollution monitoring programs as they accumulate toxic environmental contaminants to levels well above those present in the surrounding environment thus providing information on the spatio-temporal pollution trends [1,2]. Lamellidens marginalis is a bivalve mollusc predominantly distributed in the freshwater riverine environment. This sedentary and benthic organism is used for monitoring pesticides, artificial color pigments and environmental contaminants in aquatic ecosystems in the Indian subcontinent [2-4].

Lipids are a diverse group of molecules which are hydrophobic or amphiphilic in nature, the lipid structure and their properties enable these compounds to fulfill many biological functions from energy storage through membrane structure to signaling intermediates [5]. Among the different groups of lipid molecules, Fatty acids (FAs) are important biomolecules that regulate key metabolic pathways and play major role in health and diseases. These molecules play leading role in the tissue construction and maintenance of all healthy cells. They serve as the cell’s guard, operating the sodium-potassium pump that regulates the opening and the closing of the metabolic pathways. As the FA composition of an organism changes with its age, size, environmental conditions etc. these could be used as potential biomarkers for a vast array of clinical conditions [6-10].

Gas Chromatography-Mass Spectrometry (GC-MS) is a sensitive analytical technique that is used in a wide range of applications such as environment monitoring, flavor and fragrance analysis [11], pesticide analysis, metabolite analysis [12], forensic and criminal cases etc [13]. It is considered as the method of choice for detection of volatile compounds due to its high sensitivity over other analytical techniques like Liquid Chromatography-Mass Spectrometry (LC-MS) [14]. With the selection of suitable column, a wide range of compounds such as eicoscanoids, essential oils, FAs, wax, esters, perfumes, terpenes can be analyzed in GC-MS [14]. GC-MS combines the separation capability of GC with fragments identification capability of MS. Thus the results obtained in GC-MS are much more confirmatory compared to GC.

The present study was undertaken with the objective of generating information on the lipids especially FAs composition of the foot, gill and mantle tissues of Lamellidens marginalis which could be used as the baseline data in lipid biomarker discovery for aquatic ecosystem health monitoring.

Live bivalve molluscs were collected from river Ganga at Ballykhal, Kolkata (22°39'17"N 88°20'51"E) and foot, gill and mantle tissues were collected and stored at -40°C for further experiments.

Lipid extraction was carried out as per Folch et al. [15]. In brief, frozen tissues were homogenized (using a motor pestle) in the organic solvent mixture (chloroform–methanol, 2:1), keeping the solvent/ tissue ratio 20:1, and washed by centrifugation. Washing was repeated five times with fresh solvent mixture. The chloroform fractions, enriched with lipids, were collected, pooled, and dried in a rotary evaporator. The dried lipids were weighed, dissolved in chloroform, and stored in small amber glass laboratory bottles at −20°C. Fatty acid methyl esters (FAME) were prepared from the extracted fat as per Matecalfe, Schmitz, and Petha [16]. The FAMEs were dissolved in hexane for further analysis in GC-MS.

GC-MS is a powerful tool that is being increasingly used in biomarker discovery. It can be used for analysis of wide range of biological compounds including FAs, essential oils, eicoscanoids, wax, esters by the selection of suitable columns. As many of the FAs are non-volatile compounds, these needs to be derivatized into their methyl ester forms for analysis in GC-MS. A number of columns like TR-FAME, TR-WaxMS, Trace TR-1 are recommended for analysis of esters [17]. In the present study, FA composition of three different tissues of L. marginalis has been analyzed using two different columns; TR-FAME and TR-WaxMS. The compounds detected in different tissues are summarized in Table 1 and Figure 1. 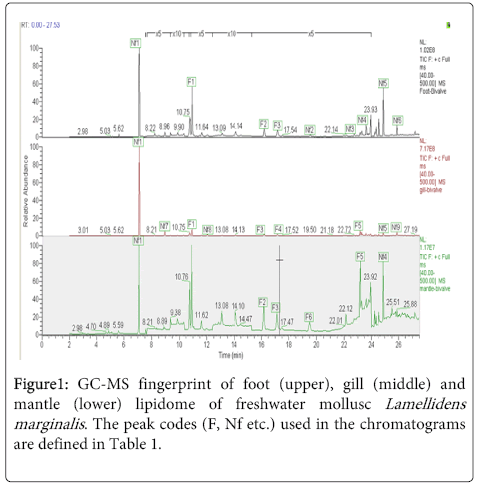 * Detected both in TR-FAME and TR-WaxMS column; other compounds were detected only with TR-FAME column. **   For identifying  the  peak  in  the  GC-MS  fingerprint  refer  codes  in  Figure 1.

Several FAs as well as non fatty acid components in different concentrations were detected in the foot, gill and mantle tissues of the bivalve analyzed by GC-MS using both TR-WaxMS and TR-FAME column.

Mantle lipidome showed the presence of palmitic acid, margaric acid, stearic acid in both TR-WaxMS and TR-FAME column whereas additionally eicosenoic acid and linoleic acid (C18:2) were detected only in TR-FAME.

It was observed that more number of FAs were detected using TRFAME column than TR-WaxMS column. TR-WaxMS column is recommended for analysis of esters, alcohols, essential oils etc. whereas TR-FAME column provides excellent separation of cis/trans isomers and FAMEs with various degrees of unsaturation. The detection of higher number of FA by the application of TR-FAME can thus be attributed to its unique design for providing greater separation of FAMEs [17].

Margaric acid is a saturated FA which occurs in trace amount in milk fat of ruminants and in very minute quantities in animal and plant fats [19]. However, it was found to be a major constituent of the foot and mantle lipidome of the bivalve.

BHT is widely used as a food preservative (E321) for fats. It preserves fats (stops them going rancid) because it is an antioxidant. BHT acts as viral membrane disrupting agent can also be used as a preventative, when there is a risk of viral infection. BHT is used as an antioxidant for minimizing oxidation of FA during the process of fat extraction. Therefore, presence of this compound in all the three samples is quite obvious.

DBP was found to be the most abundant non-fatty acid component next to BHT. It is used mainly in nail products as a solvent for dyes and as a plasticizer that prevents nail polishes from becoming brittle. Phthalates are also used as fragrance ingredients in many other cosmetics, but consumers won't find these listed on the label [22]. The sampling site Kolkata is a major city in the country and is surrounded by large number of industries which uses pthalate like substances. Therefore, presence of these substances in the tissue lipid extract could be attributed to leaching of phthalate like substances from industries and their subsequent bioaccumulation in bivalve tissues.

The FA profile of freshwater mollusc Lamellidens marginalis was generated in the present study which would serve as baseline information for studies on the pollution induced lipid biomarkers. This study also showed that a number of compounds which are soluble in organic solvents also get extracted during the lipid extraction process and remain as unidentified FAs (lipids) unless a powerful detector like MS is used to detect them, which is important from quality control (QC) point of view. The present study clearly showed that the results of lipid analysis would vary with the column used. Although the TR-WaxMS column is recommended for analysis of esters, lower numbers of FAMEs were detected in comparison to the TR-FAME which emphasizes the selection of appropriate column for sensitive experiments especially biomarker discovery. Besides, the bivalve and gastropods are used as food components in different parts of the world. The FA composition data generated for L. marginalis could serve for comparing its food value with other bivalves and other food organisms also.