Population is one of the most important units of evaluation in plant science. Genetic differentiation will be occurred via mutation, knock down or knock out. In this study, we used Liriodendron chinense germplasm. Genomic DNA was extracted and amplified with SSR-PCR to investigate diversity. Our results revealed that the genetic diversity of L. chinense is at high level in comparing with other woody plants. In addition, our results suggested that L. chinense can improve its genome by repair mechanisms under sever and variable conditions to keep its genetic diversity. This study detects genetic diversity of L. chinense using SSR marker information and distinguishes geographic populations. The aim of this study is designed to provide theoretical guidance for the effective germplasm protection of L. chinense.

Altogether, eighty genotypes/germplasm collected from twelve provenances of L. chinense were taken as plant materials. All these trees were planted at Xiashu forest farm affiliated to Nanjing Forestry University in 1993. In late April, 2013, 2~3 fresh leaves of each plant have been collected, and put in the prepared sampling box with ice cube rapidly after they were stored in valve bag. And finally, they were brought back and kept in refrigerator under the condition of -70°C.

In this experiment, the improved CTAB lysis-silica beads assay was used, in order to extract the genomic DNA of L. chinense (Table 1).

Table 1: Code and sample size for the 12 provenances of L. chinense.

The sample was placed in the ice water bath to make good rapid cooling to room temperature, add volume (2 mL) such as chloroform, isoamyl alcohol (24:1), thoroughly incorporated under -4°C after 12000 RPM centrifuge for 10 min, take that 1 mL in 1.5 mL centrifugal supernatant fluid pipe, in -20°C refrigerator save for later use.

Remove the desired DNA containing 1.5 mL centrifuge tube, and placed at room temperature so that the crude extract DNA melting into liquid. Add 100 μL suspension of silica beads (1.2 g silica beads powder was dissolved in 10 mL of sterile water), the shock with a vortex shaker for about 15 s, after sufficiently mixing, at room temperature for 10 min, then the shock of about 5 s, it mix again and then centrifuged at 8000 rpm 15 s, the supernatant obtained silica beads- nucleic acid complexes.

Add 1 mL into the compound lotion, then put in the ball grinding apparatus in the frequency of 30 Hz was 30 s, make it thoroughly incorporated and 8000 rpm centrifugal 15 s, the supernatant was discarded.

Add 1 mL 70% ethanol into the compound, and then puts the ball mill instrument in turmoil in 30 Hz frequency for 1 min, make it’s thoroughly incorporated and 8000 rpm centrifugal 15 s, abandon the supernatant (repeat).

Add 1 mL ethanol to the complex of anhydrous, then put in ball mill instrument turmoil in 30 Hz frequency for 1 min, make its thoroughly incorporated, 8000 rpm centrifugal 15 s again, abandon the clear liquid, and then open the lid centrifuge tube inversion on absorbent paper about 5 min, finally the composite was dried in vacuum for about 10 min.

Using ultraviolet spectrophotometer to detect the DNA of the proposed concentration and purity, save in -20°C refrigerator.

Table 2: System of SSR-PCR amplification, dNTP and Mg2+ to oscillation blender before use.

Preparation of the glass electrophoresis tank: Each electrophoresis tank includes two glass plates, one on both sides of the glass with the ear, a smooth glass. The glass plate with ear down to soak in the antisuicide agent about 30 min; in a positive light panel drops 3-4 drops of silicified agent, with a sponge to dab the plate surface in one direction and make it even painted the entire board face, standing 10 min, then put in the hood to dry (about 30 min).

The sealing glue: Will bring ear glass panel with ear side and light stick in the rubber coated with a face of silicide agent box, flat in the electrophoresis tank, tighten, rubber frame clamp. Use heat to melt the agar gel glass plate and rubber frame exposure to block, in case of leak adhesive should be a little bit at the bottom of the overflow groove advisable, let stand for 15 min.

55 μL TEMED, gently shake mix quickly with a large dropper Glue, Glue after the completion of the need to check whether there is a bubble, the bubble should be used if the blade the bubble pick; when inserted comb should be level and close slowly down the glass insert, comb head cannot have bubbles. Insert the comb should be completed within 15 min timely follow-up observations, if found leaking glue, glue should be filled promptly. Then put it aside until the glue solidified, pour 0.5x TBE buffer.

The holes: After the bubble will comb through parallel pull it out with a pipette or dropper blown clean gelatinous substance inside the hole, loading process if the hole has been found in the debris blockage, and then blow it clean 200 μL of then continue loading.

Sample: With a range of suitable pipette Add 1 μL amplification good DNA and added Marker in a suitable position for subsequent interpretation strip.

Pry slide: Slightly open in the middle of inserting two glass edge parallel with scissors, do not need to insert too deep, slowly separated the two pieces of glass. Will be coated with light panel is placed on the side of silicide agent, recycling AGAR gel will comb after wash clean, dry, so that next time; Put kindergarten will have ears with glue glass disc, flush with ddH2O, preparing silver stain.

(A) Put the tray placed on a shaker, shake it slightly, adding fixative into the tray, not over the glass surface can be fixed 10 min.

(B) Drained fixative, washed twice with ddH2O added AgNO3 solution (0.15%), not over the glass surface can, silver staining 6-7 min.

(D) Remove the glass; paste the appropriate label after photographs.

Electrophoresis and silver stain process and solution of reagent used

8% denaturing polyacrylamide preparation: Weigh 420 g of urea, 2 g methylene, 78 g acryl amide, into 1000 mL beaker, adding a small amount of can and 100 mL 5x TBE, the stirring with a glass rod uniformly dissolved by heating in a microwave oven (dissolved stir every 1 min process after removing dissolved), wait until completely dissolved after can volume to 1 L, with filter paper after 2 times in 4°C refrigerator.

Preparation of anti-silicidation agent: amount of 500 mL ddH2O, with glacial acetic acid to pH adjusted to 3.5, followed by addition of 3 mL Bind-silica, a magnetic stirring apparatus with hot mix.

Preparation fixative: amount of each 200 mL and 10 mL of pure ethanol, acetic acid, into the 2 L flask with ddH2O volume, stored at room temperature after Akira uniform.

The preparation of the developer: Weigh 30 g NaOH, respectively 20 mL 0.756% amount of sodium tetraborate and 20 mL of formaldehyde with ddH2O volume to 2 L, put in 4°C refrigerators.

Band interpretation: SSR is co-dominant marker; the band with consistent electrophoretic mobility in the amplification product of the same primer has homology. The band data should be numbered as increasing sequences and the length of band with A, B, C, D, E…… for instance, the lowest is A, and the top most is D or E or others, the result of band reading is AB, BC, etc., besides, if one sample only has one band, the result of band reading is AA, BB, and so on.

Analysis of genetic relationship: Clustering analysis is conducted by utilizing software NTSYS-pc 2.10e [7], and the clustering figure should be established with the method of UMPGA.

Analysis of genetic diversity of each L. chinense provenance

Fixation index (F) measures the degree of deviation between actual proportion of genotype and expected proportion of Hardy-Weinberg theory, and F<0 or F>0 means that heterozygosis is excessive or homozygosis is excessive respectively. When panmixia of individuals in populations cannot be realized, its actual proportion of genotype will deviate to some extent from Hardy-Weinberg equilibrium inevitably. As for the fixation index on each locus, their F>0, which indicate that L. chinense , on these 26 loci, deviate from Hardy-Weinberg equilibrium, and have insufficient heterozygote.

The genetic distance among twelve of L. chinense provenances 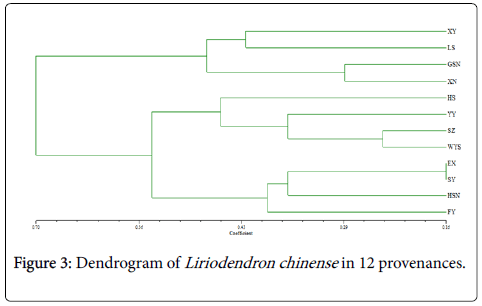 In 12 L. chinense provenances (Table 1), the polymorphism of each provenance has great differences. Its minimal expected heterozygosity is 0.2917, which is higher than that of perennial woody plants (Nei=0.18) and that of perennial woody variations with animal pollination (Nei=0.21) [19]. Perhaps, the reason of this result is that L. chinense has high degree of outcrossing [20] and outcrossing may increase heterozygosity level of filial generation. Although fragmented distribution and human interference increase the chance of inbreeding, the number of individuals generated by self-generates is very few, and the survival rate is also very low [21]. Meanwhile, low level genetic variation of L. chinense is prone to be influenced by habitat destruction, as the potentials of adaptation to environmental changes of the species rely on the level of genetic diversity [22].

Protection and utilization of genetic resources of L. chinense sarg

From the perspective of utilization, it is crucial to make sustainable improvements through maintaining the genetic diversity of species. Hence, in order to expand the genetic basis of breeding populations, seed orchards should be established by selecting elite germplasm of various provenances, which can produce improved varieties for commercial cultivation in the future. It will be a win-win situation, which not only achieve genetic gain, but also preserve genetic diversity.

Copyright: © 2018 Yaghuti AA, et al. This is an open-access article distributed under the terms of the Creative Commons Attribution License, which permits unrestricted use, distribution, and reproduction in any medium, provided the original author and source are credited.