The study was conducted in northern and western parts of Ethiopia specifically at Sheraro, Humera and Miesso locations for consecutive years beginning from 2012 to 2014. The main objective of the study was to evaluate and identify better performance and stable pearl millet genotypes across different environments and years. Fifteen pearl millet genotypes were tested at different locations and promising genotypes could be identified. The experiment was conducted using randomized complete block design with three replications. Combined mean analysis was computed after using Anderson-Darling normality test and Levene homogeneity test. Genotype and Genotype by environment interaction (GGE) biplot analysis were computed to evaluate stability and adaptability of the grain yield of pearl millet genotypes. The analysis of ANOVA indicated that the mean grain yield ranged from 1687.28 kg ha-1 for G14 (ICMV 8400 white) to 2304.72 kg ha-1 for G2 (Sub-2). From the total pearl millet genotypes seven of the genotypes showed above the mean average yields. The highest (2542.27 kg ha-1) and the lowest (1593.42 kg ha-1) grain yield were attained at Miesso in 2013 and at Sheraro in 2014 respectively. GGE biplot analysis was also computed to identify the performance and stability of pearl millet genotypes and hence a total of 72.05% variation was showed for the tested pearl millet genotypes at different environments. The study result revealed that the most responsive of corner genotypes were genotype three, genotype four, genotype five, genotype ten and genotype fourteen. At the same time genotype three, genotype six, genotype eight, genotype ten and genotype fourteen with the longest projection from the AEC x-axis were highly unstable. In contrast, genotype four, genotype two, genotype eleven and some other invisible genotypes were highly stable. In terms of stability and performance genotype four (Sub-2) was the highest followed by genotype one (Kolla-1). Regarding the GGE biplot analysis, it was the most powerful method to analyze, visualize and interpret the genotype and environment interaction. It was also a convenient procedure to genotypes stability studies and environments that has to be applied in plant breeding program. At the end, the top performed pearl millet technology should be more popularized and seed disseminated to farmers to grow at wider acreages to ascertain food security and overall livelihood improvement.

Yield performance of crops varies due to the genetic makeup of the genotypes, climatic condition and different soil constituents which are the cause for considerable variation in crop circumstances. This is due to low heritability of yield as a typical quantitative trait. Consequently, grain yield could be affected by not only genotype, but also by environment as well by and genotype x environment interactions. Multi Environment Trials (METs) are important for studying yield stability, adaptation and as well for a prediction of yield performance of genotypes across environments [1]. Typically, environment expresses most of the total yield variations, while genotype and Genotype × Environment Interaction (GEI) are usually less effective. A large GEI variation usually hinders the accuracy of yield estimation and reduces the correlation between genotypic and phenotypic values. GEI is a universal phenomenon when different genotypes are tested in a number of environments, and is an important issue for plant breeders and agronomists to predict cultivar behavior in different locations across different years prior to any variety recommendation.

Different models have been used to describe the genotype and environment effect and the most power full method is a GGE biplot model which has been used to analysis several crops. It clearly described that the phenotypic yield variation; an environment main effect describes more observed variation; while a genotypes main effect and GE interaction is usually smaller. At the same time Cooper and Hammer reported that the relevant variance components in genotype evaluation at MET is a Genotype main effect (G), and GE interaction, which are regarded as repeatable sources. Hence, Yan proposed using both G and GE effects instead of only GE interaction for yield stability analysis. It was elaborated that to facilitate use of this model, the biplot approach was used to display the GGE of a MET data set. GGE biplot model help to demonstrate graphically a GE interaction pattern so that it considered as an effective tool to identify a mega-environment, genotype evaluation based on yield and stability [2]. It is also a means to evaluate test environments from a discrimination aspect. All in all, a GGE biplot indicates both genotype and environment based on site regression (SREG) model which have been used to demonstrate a GE interaction pattern.

The study was carried out to interpret Genotype-Environment (G×E) interaction effects on pearl millet grain yield via AMMI analysis, find out stability and adaptation pattern of genotypes using visual assessment technique of GGE biplot, and determine the most suitable genotypes while combining a high level of grain yield with yield stability [3].

Objectives of the study

The main objectives of the study were to determine the magnitude and patterns of G×E interaction effects in pearl millet using GGE biplot methods of analysis, to display graphically the mean performance and stability of 15 pearl millet genotypes.

Fifteen improved pearl millet genotypes including one standard check (kolla-1) were used as an experimental material. The study was performed in a completely randomized block design with three replications across four test locations starting from 2012 to 2014 growing period. The tested locations were Sheraro, Miesso, Humera and in each site the experiment was conducted for one, three, and two consecutive years respectively. Sowing and other related agronomic practices were done as per recommendations. Data were collected from each location and treated separately [4]. Combined mean analysis was computed after using Anderson-Darling normality test and Levene homogeneity test.

In GGE biplot analysis the yield of a given crop in an environment is a mixed effect of Genotype main effect (G), Environment main effect (E), and Genotype by Environment interaction (GE). In normal METs, E accounts for 80% of the total yield variation, and G and GE each account for about 10%. For the purpose of genotype evaluation, however, G and GE are relevant to separately identify the effect of the genotype, the environment and its interaction of GE [5]. Furthermore, both G and GE must be considered in genotype evaluation, thus the term GGE. To explore G plus GE variability in yield of pearl millet, the SREG model was used presented by the following equation.

The combined analysis of ANOVA for pearl millet genotypes that were evaluated at different locations has been described. The analysis ANOVA revealed that the mean grain yield showed highly significant variation for the tested locations and the interaction of genotypes by the environment.

The GGE biplot analysis showed that PCA 1 and PCA 2 described for 46.03% and 26.02% of GGE sum of squares respectively for grain yield of pearl millet genotypes, elucidating a total of 72.05% variation as indicated in Figure 1. 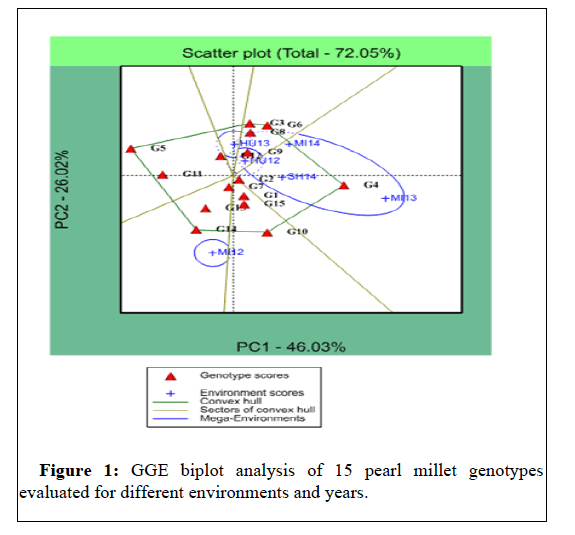 Pearl millet genotypes that were located far away from all tested locations, revealing that the yield performance was poorest as compared to others. At the same time, those genotypes which were located within the polygon for instance G1 and G9 were less responsive. In Figures 1-4 genotype of G4 was favorable at Miesso in year 2013 and at Sheraro in year 2014. Similarly, at Humera G4 was the most favorable genotype in year 2012 and 2013. This elucidated that genotype G4 had broader favorable environments as compared to other pearl millet genotypes. 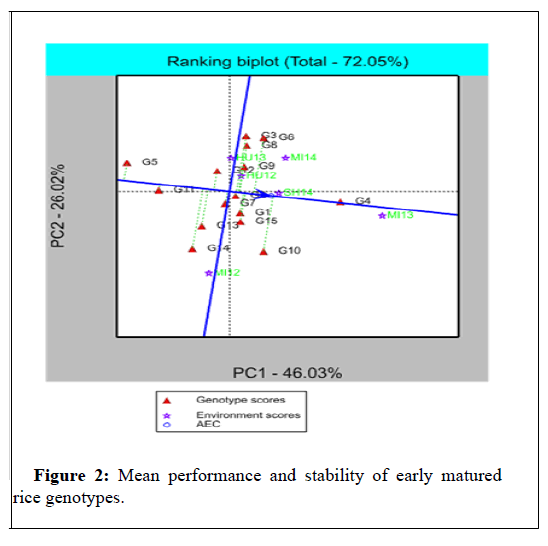 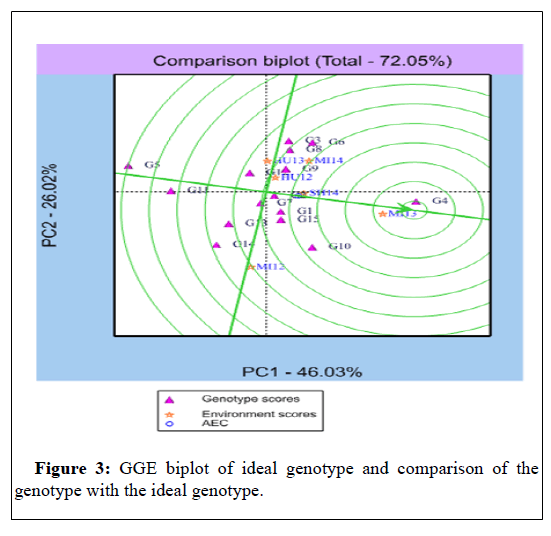 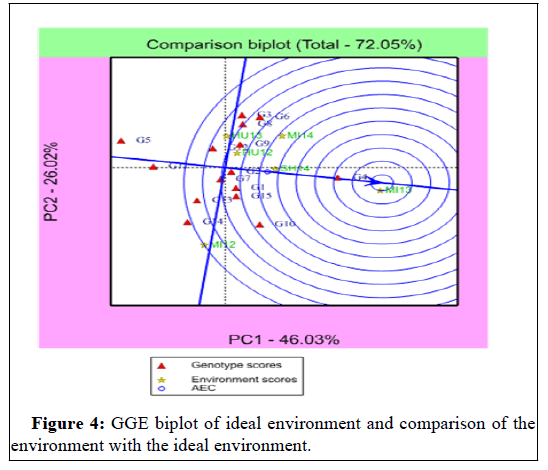 Copyright: © 2021 Solomon H, et al. This is an open-access article distributed under the terms of the Creative Commons Attribution License, which permits unrestricted use, distribution, and reproduction in any medium, provided the original author and source are credited.