Copyright: © 2015 Narkhede A, et al. This is an open-access article distributed under the terms of the Creative Commons Attribution License, which permits unrestricted use, distribution, and reproduction in any medium, provided the original author and source are credited.

We report clinical details and imaging findings of a case of giant pseudocyst occurring in the anterior abdominal wall as a late complication following mesh repair of incisional hernia in a 36-year-old female. Findings included a giant well encapsulated cyst lacking an epithelial lining filled with brownish coloured fluid and histopathology confirming an inflammatory reaction.

Repair of hernias is one of the common surgical procedures performed worldwide. Incisional hernia is mostly repaired by implanting a synthetic mesh to cover the hernial defect and reinforcing the abdominal wall to prevent recurrence [1]. The most commonly performed procedure is the placement of polypropylene mesh by onlay technique [2].

The most common complications include seromas and hematomas [3]. One of the rare late complications after mesh repair is formation of giant pseudocyst. This complication was first described in 1993 by Waldrep et al. [4].

According to some authors this might not be such a rare complication as thought to be instead its incidence may have been underestimated due to underreporting [5]. Hence we wish to propose consideration of pseudocyst formation as a late complication following mesh repair surgery for incisional hernias.

A 36-year-old non-diabetic, obese female presented to the surgical out-patient department of our hospital with the chief complaint of a huge lump originating from the lower anterior abdominal wall. There was history of gradual increase in the size of the mass over a period of one year. There were no other complaints.

She had undergone incisional hernioplasty one and a half years back using a polypropylene mesh for the repair.

The patient was evaluated further with ultrasound of abdomen and pelvis which revealed a large, well-defined, cystic lesion of approximate size 20 x 18 cms (mediolateral X anteroposterior) with thick septae and low level internal echoes within.

There was no evidence of any solid/vascular component in the lesion. The computed tomography (CT) of abdomen and pelvis showed a large left para and supra umbilical hernia with herniation of omentum, large bowel loops, small bowel loops and its mesentery with the abdominal wall defect measuring 62 x 67 mm (mediolateral x superoinferior).

A large well encapsulated cyst of size 24 x 15 x 21 cm (mediolateral x anteroposterior x superoinferior) was noted within hernial sac inferiorly with bowel loops along its superior aspect. There was no evidence of bowel obstruction/strangulation in the present study.

The patient was explored surgically and the cyst was completely excised with closure of the underlying defect in the abdominal wall. Brownish coloured turbid fluid was aspirated from the cyst which showed a predominance of cyst macrophages, few histiocytic giant cells admixed with few neutrophils which were typical of inflammation.

There was no bacterial growth in culture of the fluid after 1 week of incubation (Figures 1 and 2). 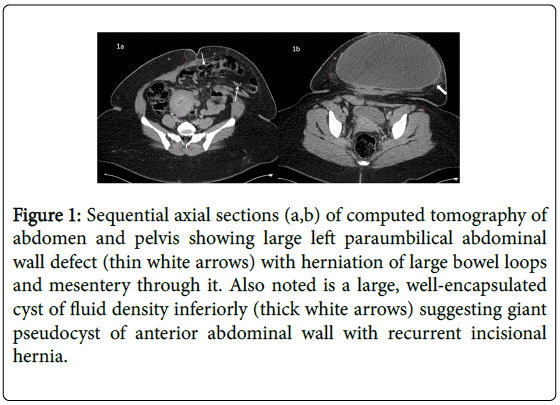 The excised specimen was sent for histopathological examination. Gross examination of the frozen section showed that the external and the inner surfaces were smooth. The inner surface showed the polypropylene mesh of previous hernia repair adhered to it. The microscopic examination of multiple sections showed collagenous tissue devoid of lining epithelium. Granulation tissue was seen. The wall showed congested blood vessels. Hemosiderophages were seen along with inflammatory cells and focal areas showed cholesterol cleft with giant cell reaction. No epithelial lining was seen lining the cyst (Figure 3). The placement of mesh for the repair of incisional hernia is related to development of few complications. The most common complication being fluid collections which may either contain serous fluid(seromas) or blood (hematomas) seen in the early post operative period [3]. Their formation is associated to both the surgical procedure performed and the type of mesh used [6].

Seromas are serous fluid collections occurring in the early post operative period. According to the recent studies an incidence of 17% [7] has been reported. Usually seromas tend to resolve within 8 weeks. If they persist for a longer period percutaneous aspiration is done. The other indications for aspiration of seromas include pain and infection. The CT appearance of seroma is a fluid density collection located deep to the prosthetic mesh usually with thin enhancing rim whereas hematomas are similar blood collections appearing hyperdense on plain CT.

One of the late occurring complications is the formation of pseudocyst which is rarely reported. The etiology is unclear and postulated to be related to long standing unresolving seroma or hematoma [8]. Some authors have proposed that it does not have any relation to the properties of mesh used or to the technique of mesh repair, however, a few are of the opinion that its occurrence might be related to use of polypropylene mesh [9]. On CT pseudocyst appears as a well defined fluid density collection usually located adjacent to the hyperdense prosthetic mesh. It may sometimes be seen along with the displacement of mesh leading to the recurrence of hernia. The pseudocyst contains brownish coloured turbid fluid which on cytopathology shows predominance of inflammatory cells with no bacterial growth on culture as seen in our case. Thus the formation of pseudocyst can be considered an inflammatory response to chronic long standing pathology.

Pseudocysts are unresponsive to aspiration with high incidence of recurrence after aspiration [4]. The only definitive treatment is complete cyst excision. It is also suggested that the use of minimally invasive surgical procedures and sublay technique of mesh placement can prevent formation of pseudocysts [10].