Giant Hidradenoma of Limbs: A Report of Two Pediatric Cases

Copyright: ©2017 Jlalia Z, et al. This is an open-access article distributed under the terms of the Creative Commons Attribution License, which permits unrestricted use, distribution, and reproduction in any medium, provided the original author and source are credited.

Hidradenoma is a rare benign tumor that develops of the eccrine sweat glands. We report here two cases of benign giant hidradenoma with a clear cell variant in one case and nodular in the other. The tumor was localized on the forearm in a patient aged 6 years and in the foot in a 14-year-old child. An excisional biopsy was performed in both patients. Evolution was marked by a good outcome without recurrence. We try through this paper to review an uncommon tumor which his eccrine origin is controversial and which biological behavior was badly known.

Hidradenoma is a rare benign soft tissue tumor, which develops at the expense of the sweat glands of the skin. This tumor may be solitary or multiple and often resides in the vulvar region of adult women. The giant form and sitting at the foot is very rare. The scarcity of this tumor causes it to be poorly known by most practitioners. We present two pediatric observations of giant limb hidradenoma.

This is a 14-year-old boy who consulted us for a swelling in front of the right ankle internal malleolus. Four months after its onset, tumefaction increased in size and became painful with mixed type pain. The child walked without lameness. The clinical examination found a tumefaction on the internal surface of the ankle, well limited, subcutaneous 5 cm of diameter firm in consistency, painful on palpation and mobile relative to the deep plane. The opposite skin was bluish and adherent to the tumor (Figure 1). Figure 1: The opposite skin was bluish and adherent to the tumor.

The ankle was mobile and painless. The standard radiograph showed no calcifications in soft tissue or bone involvement (Figure 2). 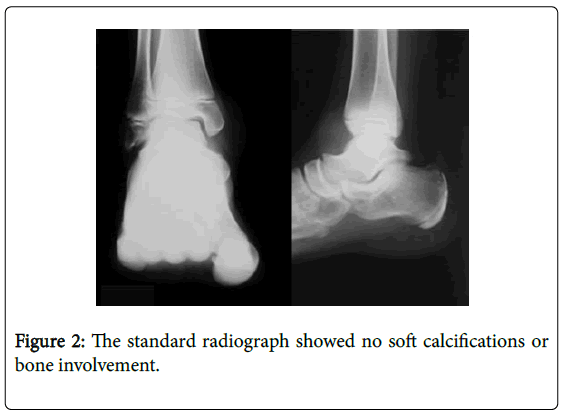 Ultrasound showed a well-limited multilocular cystic mass containing fleshy vascularized Doppler buds. MRI showed a mass measuring 70 × 40 × 20 mm para and pre-malleolar internal with supra and sub-malleolar extension, independent of tendon structures, located in the depth of the subcutaneous tissue. This mass was very limited and had a multiloculated cystic part and a fleshy part with a fibrous character. The cystic part had hyper-signal in T2, and an hyposignal in T1 not enhanced by the injection of gadolinium. The fleshy part was in hypo-signal in T1 and in T2, and was enhanced after injection of gadolinium (Figure 3). Figure 3: MRI showed a mass measuring 70 × 40 × 20 mm para and pre-malleolar internal with supra and sub-malleolar extension. The cystic part had hyper-signal in T2, and an hypo-signal in T1 not enhanced by the injection of gadolinium.

This is a 6-year-old boy, who was followed at the external consultation for a swelling of 2 cm in diameter at the posterior surface of the upper 1/3 of the right forearm, appeared about 5 months before the consultation and which has increased steadily and gradually in size.

Initial examination showed a solitary, non-painful, solid tumor with no local inflammatory signs. But as a result of trauma to the right forearm, the swelling had increased in size in a short time. The standard radiograph showed no calcifications of the soft parts, and no bone damage. 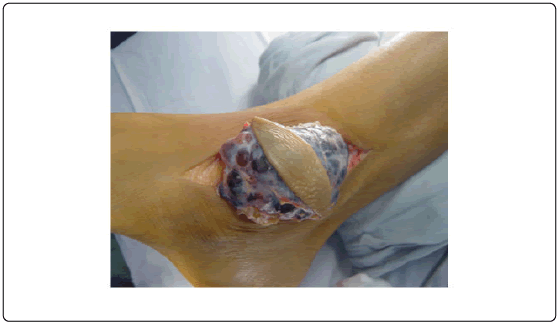 A biopsy was performed. The approach of the tumor was relatively simple. It was polylobed, encapsulated (Figure 4a), rather vascularized and pediculated at its base by the internal saphenous vein (Figure 4b). Figure 4b: polylobed and encapsulated tumor, vascularized at its base by the internal saphenous vein. The cells appear monomorphic without atypies with some mitoses, the study concluded that a nodular hidradenoma. The evolution was good and at a decline of more than 3 years, we noted no recurrence.

Ultrasound had found a subcutaneous mass measuring 21 × 23 × 9 mm, displacing the underlying muscle, containing no calcifications, doppler was not performed. The biopsy resection was done and the direct approach showed an extra-aponeurotic tumor, well limited by a fibrous capsule of white pearly color. The anatomopathological examination had found a benign epithelial proliferation well limited on the periphery made up of joints with clear cytoplasm, arranged in sheets and in places of loci of glandular differentiation without atypia or mitosis. The study concluded a clear cell hidradenoma. The progression was good and at a 14-year follow-up, there were no recurrences.

Hidradenoma is an eccrine, benign and rare dermohypodermal tumor belonging to the group of adnexal tumor of the skin developing precisely at the expense of the sweat glands [1]. It often occupies the vulvar region in women and the peri-anal region in men and is found at a lower frequency in the scalp, neck, face, lower eyelid, external auditory canal, knee and foot [1]. The results of a study conducted by Hernandez-perez and al on 89 cases of nodular hidradenoma of which 57 women and 32 men collected over 10 years showed the following distribution of this tumor. In 30% of cases in the scalp and face, 25% in the upper limbs, 20% in the thorax and 12% in the lower limbs [2]. A female predominance was noted in other series with a sex ratio of 1.7 for MOON and all. [1]. This tumor has sometimes been associated with hyperestrogenemia. Moreover, it is established that hidradenoma increases more rapidly in size in pregnant women, whose body undergoes hormonal, immunological and vasoregulation changes resounding on the skin and its appendages [3]. Some cases of hidradenoma have been associated with hypogonadism by cryptorchidism in the boy. Estrogen receptors have been identified on the surface of hidradenomas in these boys. The presence of these receptors is inconstant and recent studies even mention progesterone receptors. This association with hyperestrogenemia plays a role in the multiplicity of localizations and not in the appearance of the hidradenoma [4]. Clinically, the hidradenoma is often in the form of a papule 2 to 3 mm in size, dark or transparent with a firm consistency and sometimes associated with multiple cysts [2]. Exceptionally this tumor can be seen in its giant form with a size of 2cm and more, this giant form can be seen in all the locations already mentioned but it keeps a predilection for the genital region of woman, and that perianal for the men. The standard radiography did not show any particular abnormalities. The ultrasound easily realizable for all the localizations of the hidradenoma showed in our first case a well-individualized cystic mass with multiple fleshy vascularized doppler buds, But this is not the case for all hidradenomas, especially those that sit superficially in the subcutaneous tissue as well as in the fingers [5]. At MRI, nodular hidradenoma often appears as a mixed mass associating a solid part with another liquid. In some cases, there is only one solid part. The tumor signal usually hypo T1 and hyper T2 may have a distribution influenced by the cholesterol level in the hidradenoma, the composition of the secretion product of the sweat glands and the possible existence of intra-tumor bleeding; Thus the bleeding can pass the signal in T1 from hypo to hyper [5]. The imaging of the hidradenoma with clear cells has no particular aspect according to our bibliographic references

The definitive diagnosis is only histological. Biopsy of this tumor is usually performed surgically but fine needle sampling is possible and the study will often be limited to a cytological examination [6]. The hidradenoma belonging to the group of adnexal tumors of the skin, originates in the sweat glands, this benign tumor presents two main histological variants, nodular and that with clear cells. Histologically, the hidradenoma consists of a monomorphic epithelial proliferation of solid and cystic architecture limited by a collagen pseudo-capsule. There is often a squamous and glandular differentiation. The histological analysis of this tumor is not always easy and its origin eccrine, where apocrine according to some is controversial. This analysis will use immunohistochemistry in front of cells with little differentiation and the antibodies anti CD15 and anti-membrane protein P63 are used [7]. The clear cell hidradenoma presents a differential diagnosis with metastases of a clear cell kidney adenocarcinoma. Clear cell hidradenomas occur most commonly as benign epithelial proliferation with clear cytoplasmic cells rich in collagen. The association of epidermoid cells with central vesicular nucleus or mucinous cells is possible. The stroma is sclerotic or richly vascularized with ectasic vessels. The immunohistochemical study shows positivity to cytokeratin, and the P53 protein as well as CD10 and KI67 negativity for clear cell hidradenomas and makes it possible to distinguish between the two forms [8]. The prognosis of hidradenoma is often good but malignant transformation into hidradenosarcoma is possible, this risk is increased after the age of 50 years. The malignant form described by KEASBEY and HADLEY in 1954 [9] has an important local aggressiveness, with lymph node and bone metastases but can also be cutaneous, hepatic and pulmonary metastases to [10]. This malignant form often develops from a benign lesion but a de novo malignant hidradenoma is possible. The benign and malignant forms can coexist in the same patient. The malignant form has a peak incidence between 50 and 70 years without female predominance. Ulceration, bleeding and skin fistulization with viscous fluid are clinically in favor of malignancy. The existence of estrogen receptors testifies to a certain degree of differentiation which would be of better prognosis [11]. The treatment of this tumor remains mainly surgical. Given the risk of malignant transformation, the management of the hidradenoma should be vigorous, especially since this tumor has an important local aggressive potential and a capacity of metastasis towards the lymph nodes, viscera and sometimes even cerebrospinal [12]. For benign forms, surgical excision should be the rule. For benign but unsightly facial forms, electrocoagulation is the treatment of choice. The surgery of the giant and highly vascularized forms will be followed by a good haemostasis of the site and preferably drainage [13]. The management of the malignant form is multidisciplinary. Therapeutic management is not well established and remains a team issue. Neoadjuvant chemotherapy followed by surgery is usually proposed, Sunitinib® and the tyrosine kinase inhibitor were used [14]. Other protocols for docetaxal-based chemotherapy (Taxotere) have been used [15]. The surgery consists of performing a tumor excision with a margin of safety of 2-3 mm in the forms of small size and 2 cm in the giant forms, this margin will be minimized when the tumor sits around the orbit. Surgery may be associated with prophylactic lymph node dissection due to the high number of subclinical ganglion metastases. The malignant hidradenoma is radio-resistant. Overall survival is 15 to 45 months and the progression without recurrence at 5 years is evaluated at 30% [16,17]. The determination of the carcinoembryonic antigen (ACE) is used to detect local recurrent sub-clinical [8].