The Sultanate of Oman has a shoreline of 3,165 km and offers a diverse range of natural resources and promising circumstances for social and economic development According to the Oman general census of 2010, 80% of the Omani population lives in low-lying areas such as coastal plains and could be threatened by Sea Level Rise (SLR). During the last five years the country witnessed two strong tropical cyclones, Gonu 2007 and Phet 2010 revealed the extreme vulnerability of the populated Omani coast to storm surge and flooding. The impact of SLR on the entire Omani coastal zone was assessed to develop estimates of inundated land area relative to a set of SLR scenarios. The impact of SLR was evaluated through the use of a GIS framework. A total of 7 SLR scenarios were considered: 0.2 meters, 0.5 meters, 1 meter, 2 meters, 3 meters, 4 meters and 5 meters. The sea level scenarios were overlain on land use/elevation datasets to estimate the inundation risk among all land use categories. All the grid cells that would be inundated based on a user-defined horizontal spatial resolution of 0.5 meters for the entire coastline. The results of the assessment show that Oman is highly vulnerable to climate change-induced SLR. At the national scale, nearly 400 km2 of total land area is projected to be inundated under the smallest SLR scenario. Under the highest SLR scenario, over 900 km2 is potentially inundated. An assessment of the vulnerability of productive land use shows that the Al-Batinah and Muscat governorates are the most vulnerable under all SLR scenarios. The findings of this study, shows that an urgent need to develop a strategic coastal management plan to face the challenges of the climate change, and to provide a clear outlook of the Omani coastal areas for better adaptive resilience and responses.

By 2100, the 2001 IPCC Third Assessment Report (TAR) [1] predicted a rise in Sea level between 20 and 70 cm. However, in the 2007 IPCC [2] AR4 projected that sea level will rise from 18-59 cm during the same period. A recent study published by Rahmstorf, Foster, and Cazenave [3] (RFC 12) consider the above IPCC projection as too conservatives and underestimate future SLR, due to the limitations of the IPCC model, because they did not involve dynamic ice melting processes.

RFC12 uses a semi-empirical approach based on the proportionality between global warming and SLR. Further warming will lead to more ice melt and reinforcing the melting cycle. RFC12 concludes that satellite-based linear trend 1993–2011 is 3.2 ± 0.5 mm yr-1, which is 60% faster than the best IPCC estimate of 2.0 mm yr-1 for the same interval.

Most likely, the difference between RFC12 semi-empirical assessment and IPCC model-based, is related to the forcing of ice continental melting under the effect of the greenhouse warming. IPCC model assumes the contribution of the Greenland and Antarctic ice sheets to the future SLR is insignificant, because they are expected to gain mass from an increase in snow fall. The recent observation over the last two decades, confirm that both ice sheets are losing mass with an accelerated rate.

The Projected SLR will have a deep and largely negative impact, even with a modest projected SLR. Coastal inundations, contamination of coastal aquifers with marine intrusion are all realities of even a small amount of SLR. SLR is a growing threat to approximately 23% of the world's population, who live within 100 m of sea level and 100 km from the coast [4]. The density of the coastal cities is three times the global average and nothing could stop their attractiveness, mainly in the developing countries.

The impact of the SLR varies from country to country depending on coastal geomorphology and present and future human activities in the coastal zone. The Sultanate of Oman is located in the south eastern corner of the Arabian Peninsula (Figure 1), with more than 3,165 km of shoreline. Its coastal zone offers a diverse range of natural resources and promising circumstances for social and economic development (fisheries, aquaculture, agriculture, tourism, transportation, urbanization, etc.). The physical features of the coastline of Oman vary considerably, from precipitous cliffs falling to depths of over 40 meters near the shore of Musandam in the far north, to shallow sandy beaches with scattered inlets and lagoons (some of which support mangroves) along the Al-Batinah coast. The coast of Central Oman is characterized by sandy beaches with areas of salt flats, especially in Barr Al Hikman, which joins the Al Sharqiya Sands opposite Masirah. Extensive high cliffs with some sandy beaches and tidal inlets characterize the coast of Dhofar in the southwest (Figure 2). 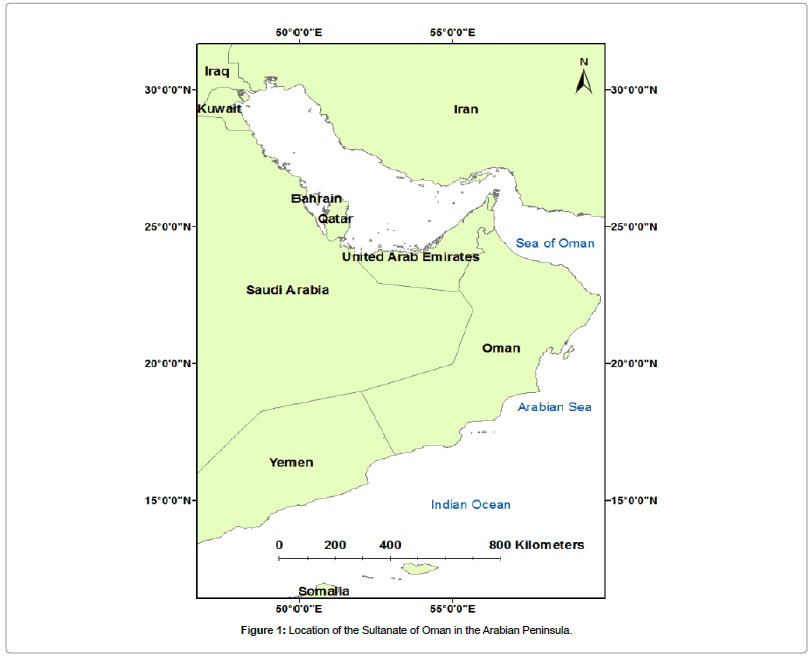 Figure 1: Location of the Sultanate of Oman in the Arabian Peninsula. In 2010, the general census of Oman shows that 56% of the population in Oman are concentrated in Muscat and Al-Bathina coastal plain (Figure 3). This plain, which serve as Oman's main agricultural areas, have elevations ranging from 0 to 500 m and its width in the middle is around 50 km. The Al-Batinah coastal plain has been experiencing rapid development in the past four decades and its attractiveness will continue in the future due to the recent implementation of heavy industrial activities. Coastal erosion along several stretches of Oman's shoreline has long been recognized as a problem of growing magnitude. At present, coastal erosion and accretion occurs as natural processes and the continuing change of the shoreline. The problem is particularly severe for the Al-Batinah coast along the Sea of Oman, which is retreating at a rate of about 60 cm/year [5]. With future climate changeinduced SLR, coastal erosion rates are expected to increase, posing even greater challenges to coastal settlements. 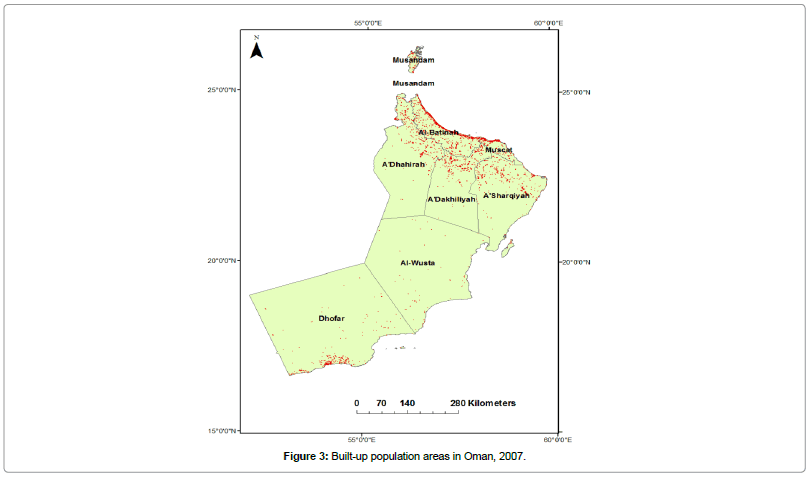 Furthermore, according to the census of 2010 [6], 80% of the Omani population lives in low-lying areas such as coastal plains and could be threatened by SLR. During the last five years the country witnessed two strong tropical cyclones, Gonu 2007 and Phet 2010 which causes damage estimated at 5 billion USA and revealed the extreme vulnerability of the populated Omani coast to storm surge and flooding [7]. Even, without the impacts of extreme events, the coastal cities in Oman are currently exposed to flooding, erosion, and salinization of ground and surface water. The current hazard and the growing risk of the Omani coast, call for a quantitative assessment of the impact of the SLR to sketch-up the most adequate response strategies.

This paper aims to assess the vulnerability of the entire Omani coastal zone to the expected SLR throughout a series of anticipated scenarios. A GIS framework was developed to conduct this study and to overlain the sea level scenarios on land use/elevation datasets to estimate the inundation risk among all land use categories.

The impact of SLR on the entire Omani coastal zone was assessed to develop estimates of inundated land area relative to a set of SLR scenarios. The general process for the assessment of the vulnerability to SLR in Oman is shown in Figure 4. In this process, the impact of SLR was evaluated through the use of a GIS framework. GIS is a mature tool which has powerful ability to processing spatial data and largely used in assessing SLR impacts [8]. Specifically, SLR scenarios were layered onto land elevations in the coastal zones to produce estimates of the total inundated areas in each of the six coastal governorates. 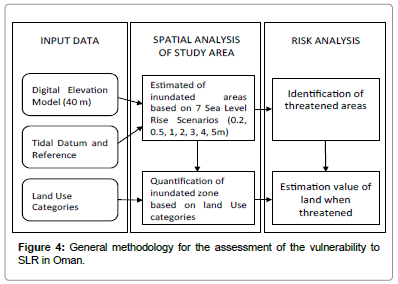 Figure 4: General methodology for the assessment of the vulnerability to SLR in Oman.

The Tidal Datum and Reference Benchmarks data based was obtained from the Oman National Hydrographic Office. The assumed tidal range in the Sea of Oman was 0.89 to 1.70 meters. Since 1990, Chart Datum has been established at over 40 sites along Oman's coast from observations conducted by, or under the supervision of, the Royal Navy of Oman's Hydrographic Department [9-12]. A total of 7 SLR scenarios were considered: 0.2 meters, 0.5 meters, 1 meter, 2 meters, 3 meters, 4 meters and 5 meters.

To assess the maximum inundation risk to coastal communities, these levels were added to Mean High Tide (MHT) levels. The sea level scenarios were overlain on land use/elevation datasets to estimate the inundation risk among all land use categories. The coastal line of the governorate of Dhofar was excluded from the estimation of the risk due to the lack of appropriate land use datasets. All the grid cells that would be inundated based on a user-defined horizontal spatial resolution of 0.5 meters for the entire coastline. 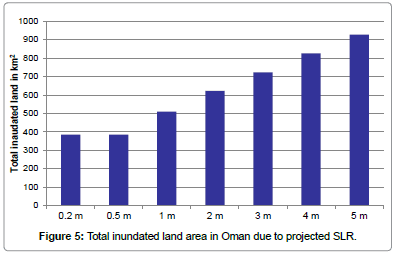 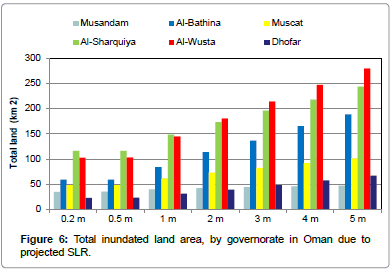 Figure 6: Total inundated land area, by governorate in Oman due to projected SLR. 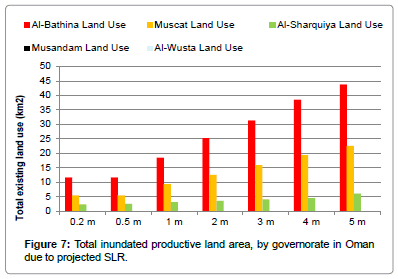 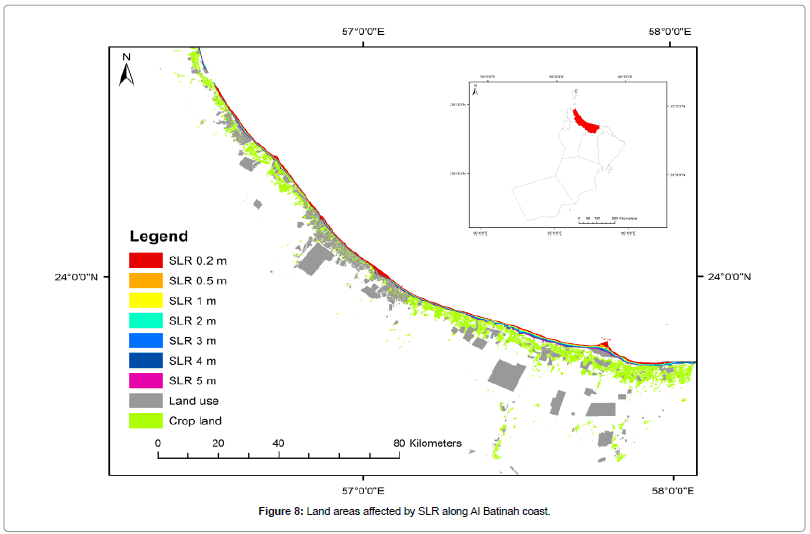 In this research, a GIS based approach was developed to simulate the impacts of SLR based on a range of low, medium and high scenarios. The obtained results were also overlaid on land use map, allowing an exploration of vulnerability and risk. This approach has demonstrated the threat form SLR at country level, based on a coarse spatial resolution. We posit that GIS based approach with high spatial resolution can play at least two critical roles in assessing Sea-Level Rise impacts. First, the capacity to characterize damage at local scale directly supports a broad range of technical information needs to reduce exposure and vulnerability to Seal Level Rise. Second, the level of detail afforded by the high Digital Elevation Model provides critical calibration and validation data for estimating human response to the threat of sealevel rise and the economic impacts of SLR on coastal property, with potential applications to policy and local land-use decisions.

Recently, the National Survey Authority has started the generation of an ultra-High Digital Elevation Model (1-5 m). This will help to provide an accurate assessment of the potential impacts of the expected SLR on the coastal area of the Sultanate of Oman, which enables stakeholders to make informed decisions and to revise the current legislative framework. Coastal scientists and managers are increasingly being called upon to assess the physical, economic, and societal impacts of SLR due to climate change, and hence investigate appropriate response strategies. This process is broadly termed vulnerability assessment and can usefully be structured into three levels of increasing complexity: (1) Screening Assessment; (2) Vulnerability Assessment; (3) Planning Assessment.

The concentration of the major cities and industrial hub in low laying coastal area, the Sultanate of Oman could face the most divesting consequences of the expected SLR, even at very low level rate. The vulnerability of the Omani coastal zone may increase in the near future, due to sustain increase of utilization of the coastal zone. This trend is confirmed with the recent implementation of a new coastal city in Duqum and the large investment in industrial hub of Al-Bathina region. To date there is no coastal management plan in the sultanate of Oman to face the existent problem or to deal with the consequences of SLR. Without coastal management plan, Sea-level rise even at very low rate will exacerbates existing problems, related to coastal erosion and sever maritime intrusion in the coastal aquifers. The Supreme Council for Planning (SCP) and the Ministry of Environment and Climate Affaires, among other authorities, has expressed concern about coastal erosion and the potential impacts of SLR on coastal communities and resources. The findings of this study, shows that an urgent need develop of a strategic coastal management plan to face the challenges of the climate change, and to provide a clear outlook of the Omani coastal for better adaptive resilience and responses.

Copyright: © 2014 Al-Buloshi A, et al. This is an open-access article distributed under the terms of the Creative Commons Attribution License, which permits unrestricted use, distribution, and reproduction in any medium, provided the original author and source are credited.