Granulomatous Disease with Hepatic and Splenic Infiltration: A Case Report

Copyright: © 2014 Conroy M, et al. This is an open-access article distributed under the terms of the Creative Commons Attribution License, which permits unrestricted use, distribution, and reproduction in any medium, provided the original author and source are credited.

A 42 year old woman underwent a Computed Tomography (CT) scan after developing respiratory symptoms in the setting of a previous pulmonary embolus. It showed diffuse infiltrates of the right lung lobe, atelectatic changes of the left lung lobe, and multiple hypodense lesions of the liver and spleen. A diagnosis of lymphoma or a chronic opportunistic infection was entertained. Tumor markers and serum studies showed only an elevated ß-2 microglobulin. Positron Emission Tomography (PET) was performed and demonstrated multiple foci of uptake in the liver, spleen, mediastinum, supraclavicular and axillary areas. A bone marrow biopsy demonstrated no abnormal findings. She underwent a diagnostic laparoscopy for biopsy. Final pathology of the liver lesions showed noncaseating granulomatous inflammation suggestive of sarcoidosis. The patient began corticosteroids treatment and was in remission at 9 month follow-up. The prevalence of hepatic granuloma in sarcoidosis depends on the population studied and on the procedure used for obtaining the liver specimen. It has been reported in up to 80% of cases in some series. A recurrence after at least one year in remission affects less than 5% of patients but when it occurs it can develop at any age and in any organ. Corticosteroids remain the mainstay of therapy, despite the lack of well-controlled clinical trials to show that these agents improve patients' long-term outcome.

Sarcoidosis is a granulomatous disease of unknown etiology. The diagnosis is established when clinical and radiological findings are supported by histological evidence of noncaseating epithelioid cell granulomas [1]. Lymph nodes, lungs, liver, spleen, and skin are common sites of sarcoid granuloma consolidation. Ocular and skin lesions can also be common. Interestingly, sarcoid granulomas can resolve and leave behind fibrotic changes after appropriate therapy.

A 42 year old Caucasian woman suffered a pulmonary embolus after changing oral contraceptive formulation. Four months later she underwent a CT scan to evaluate new-onset respiratory symptoms that suggested the presence of restrictive lung disease to her family physician. Her CT scan demonstrated diffuse infiltrates of the right lung lobe, atelectatic changes of the left lung lobe, and multiple hypodense lesions of the liver (Figure 1a) and spleen (Figure 1b). On history, she denied any new constitutional symptoms. She never used tobacco products and had no exposure to harmful chemicals. She did report a family history of lymphoma. Her physical exam was unremarkable. Complete blood count, basic chemistries, HIV and liver function tests were within normal limits. Tumor markers and serum studies showed only an elevated ß-2 microglobulin. A diagnosis of lymphoma versus an opportunistic infection was entertained. Figure 1B: CT scan demonstrating hypodense lesions of the spleen An exploratory laparoscopy was performed to obtain tissue. Intraoperatively, multiple lesions were noted within the liver, spleen, and anterior aspect of the uterus (Figure 3). No other lesions were found within the peritoneum or omentum. Multiple core liver biopsies, and endometrial biopsies were obtained and a wedge biopsy, continuing lesions, was obtained from the left lateral segment of the liver. Final pathology of the liver lesions indicated noncaseating granulomatous inflammation suggestive of sarcoidosis. The endometrial biopsies were normal. Her serum angiotensin converting enzyme (ACE) level was normal. 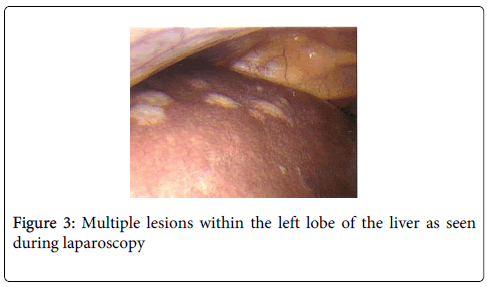 Figure 3: Multiple lesions within the left lobe of the liver as seen during laparoscopy

In this patient, the homogenous and circumferential appearance of the multiple lesions as well as the distribution and signal uptake on PET scan was suggestive of malignant or metastatic disease. We proceeded with laparoscopic biopsy as it would provide us both cellular and architectural information on the lesions.

Asymptomatic patients with mild liver function abnormalities and no other sarcoid involvement do not require treatment [1], mainly because “hepatic involvement rarely causes portal hypertension, hepatic failure, or increased mortality related to liver dysfunction.” however, due to the substantial hepatic involvement on biopsy, the patient began corticosteroids treatment (Prednisone 40 mg per day to taper to 10 mg over a 6 month period). The treatment plan was to treat for 12 months and then assess disease response. At 9 month follow-up the patient remained asymptomatic without any evidence of disease progression. Final imaging and pathology is unavailable due to Health Information Management and patient privacy guidelines in place at the original medical institution.

The prevalence of hepatic and splenic granulomas in sarcoidosis depends on the population studied and on the procedure used for obtaining the specimens, but have been reported in up to 80% of cases [2]. In our patient we found a strong positive uptake on PET. Other reports have shown that sarcoidosis can produce increased uptake in other tissues [3] as well as the primary granuloma [4]. Nonspecific immunosuppression with corticosteroids remains the mainstay of therapy, despite the lack of well-controlled clinical trials to show that these agents improve patients' long-term outcome [5]. ACE levels are elevated in 60% of patients with sarcoidosis, and decreased levels indicate successful steroid therapy [6,7].

Remission of patients with sarcoidosis occurs within three years for more than half, and within a decade for two thirds of patients. A recurrence after at least one year in remission affects less than 5% of patients, but when it occurs it can develop at any age and in any organ. Up to a third of patients have unrelenting disease, which can lead to clinically significant organ impairment. Less than 5% of patients with sarcoidosis die from it. Death is typically the result of pulmonary fibrosis leading to respiratory failure or due to complications from cardiac or neurologic involvement [7].