Hemosiderosis due to Chronic Alcoholism

Copyright: © 2014 Tasar PT, et al. This is an open-access article distributed under the terms of the Creative Commons Attribution License, which permits unrestricted use, distribution, and reproduction in any medium, provided the original author and source are credited.

Alcoholic liver disease is characterized with excess consumption of alcohol for long term and variable hepatic injury. Chronic alcohol consumption often leads to a disease called alcoholic liver disease [ALD]. It is generally with an accompaning iron accumulation. Increased plasma iron levels and tissue iron overload stimulate synthesis of hepcidin, resulting with release of iron from macrophages and duodenal enterocytes to the plasma. This homeostasis ensures that plasma iron level is maintained within a constant range and excess absorption and accumulation of iron in tissues are prevented. Alcohol-induced oxidative stress in hepatocytes is one of the main mechanisms by which hepcidin expression in the liver is down-regulated by alcohol. The decrease in liver hepcidin synthesis leads to an increase in intestinal iron transport and liver iron content. We report a case hemosiderosis secondary to chronic alcoholism.

Chronic ethyl alcohol consumption damages almost all organs and tissues. Such effects are secondary to direct toxicity of alcohol and metabolites, while it is also known that intestinal absorption of folate and Vitamin B12 is impaired. In addition, it is found that free radicals play a role in tissue damage secondary to metabolism of alcohol.

Whatsoever the mechanism, chronic alcoholism results with many hepatic conditions ranging from fatty degeneration to cirrhosis, acute or chronic pancreatitis, alcoholic cardiomyopathy, and neurological lesions ranging from WernieckeKorsak of syndrome, peripheral neuropathy and cerebral and cerebellar atrophy, and gastritis, peptic ulcer and endocrine disorders such as testicular atrophy and amenorrhea [1,2].

Alcoholic liver disease is a clinical picture which is characterized with excess consumption of alcohol for long term and variable hepatic injury. Alcoholic liver disease is a condition which is due to cumulative alcohol intake for a long period of time and characterized by hepatic injury with a variable severity. Excess consumption of alcohol leads to Alcoholic Liver Disease [ALD] which is associated with excess iron accumulation and is characterized with hepatosteatosis, fibrosis, hepatitis and cirrhosis.

A derivative of denatured ferritin, referred as hemosiderin, accumulates in hepatic Kupffer cells, spleen and bone marrow in chronic hemolytic anemia, excess blood transfusion and various hepatic diseases. Hemosiderin is usually produced and microscopically determined in case of excess iron loading characterized with synthesis of apoferrin and maximal iron retention. Fe+3[Iron] accounts for 35% of molecular weight of hemosiderin; however, iron mobilization is slower in hemosidering in comparison with ferritin.

Hemosiderosis is a condition which is characterized with severe iron overload resulting with accumulation of hemosiderin in liver, pancreas, skin and joints. Increase in total total body iron and hemosyderin deposition at liver, pancreas, skin and articulations is described as hemosiderosis.Iron is accumulated in hepatocytes and Kupffer cells in alcoholic liver disease.

The 49 years old male patient has medical history of chronic ethyl alcohol consumption and the patient with lower gastrointestinal bleeding was hospitalized. On sigmoidoscopy, colon polyps and edematous hemorrhagic mucosa were found and pathology result of polyps was consistent with hemosiderosis (Figure 1). Although portal doppler ultrasonography [USG] was reported as normal there was diffuse hepatomegaly in abdominal USG. Biochemical serum analysis such as Iron:272µg/dL, total iron binding capacity [TIBC]:272 µg/dL, Saturation:100% and Ferritin:3249 ng/dl . Liver biopsy was performed since ferritin level was high and hemosiderosis was found in colon biopsy specimens. Liver biopsy indicated minimal portal and lobular inflammation, minimal steatosis, bridging fibrosis and hemosiderosis (Figure 2). Echocardiography, performed to eradicate the possibility of cardiac storage, was reported as otherwise normal than LVEF 60 %, mild tricuspid dysfunction and left ventricular dysfunction. Treatment was planned and the patient was consulted to alcohol cessation unit, and ferritin level of the patient, who avoided consumption of alcohol, regressed to174 ng/dL within two years. Hemosiderosis was not found in colon biopsies which were taken for control purposes. 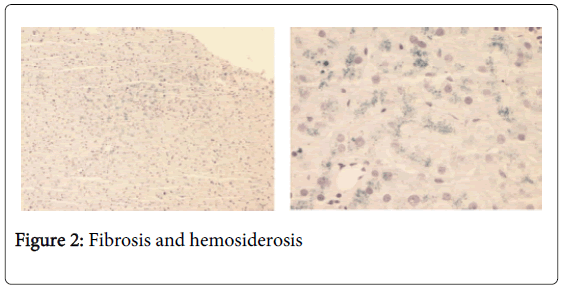 Chronic alcohol consumption is among leading causes of liver diseases in many countries. Hepatosteatosis, alcoholic hepatitis, hepatic fibrosis, cirrhosisis are found among the liver pathologies as a result of chronic alcohol consumption or addiction. Recently, effects of pathological changes caused by alcohol and oxidative stress on pathogenesis of such diseases are very often emphasized.

Ethanol is rapidly absorbed [90%] via gastrointestinal tract and metabolized in hepatic cells; it is oxidized to acetaldehyde by alcohol dehydrogenase, microsomal ethanol oxidixing system [MEOS] and catalase. Alcohol is metabolized by alcohol dehydrogenase [ADH] and cytochrome P4502E1 [CYP2E1] in the liver.Alcohol-induced oxidative stress leads to the suppression of hepcidin promoter activity and hepcidin transcription in the liver.The parenchymal, but not the non-parenchymal cells of the liver are involved in the regulation of hepcidin transcription by alcohol-induced oxidative stress [3].

It’s implicated that alcohol consumption leads to lipid peroxidation [LP] via induction of oxidative stress in hepatic and non-hepatic tissues[4]. In this reaction, NAD is reduced to NADH by alcohol dehydrogenase and oxidized to NAD by aldehyde oxidase in order to re-use it and reactive oxygen species are also synthesized [5]. MEOS is activated when blood and tissue alcohol level is >50 mg/dL; the enzyme has component of cytochrome p450 2 E1. Metabolization of alcohol with cytochrome P450 2E1 leads to synthesis of free oxygen radicals such as superoxide and hydroxyl.

In addition, it is suggested that ethanol and the principal metabolite, acetaldehyde, lead to synthesis of free radical species in tissues where they cannot be metabolized, and they may be responsible for alcohol-dependent toxicity and damage based on pro-oxidative effect in such tissues [7].

Hepcidin is an antimicrobial protein that is synthesized in the liver.However, the mechanism of accumulation of excess iron in patients with alcoholic liver is not yet illuminated.By the way, many studies show that hepcidin may have an important role in this process [15,16].Increased plasma iron levels and tissue iron overload stimulate synthesis of hepciding, resulting with release of iron from macrophages and duodenal enterocytes to the plasma. This homeostasis ensures that plasma iron level is maintained within a constant range and excess absorption and accumulation of iron in tissues are prevented [17,18].

Hepcidin whose synthesis is stimulated by the increase in plasma iron levels and iron stores in tissues, reduces the release of iron from duodenal enterocytes, macrophages to the plasma. This homeostasis ensures that plasma iron level is maintained within a constant range and excess absorption and accumulation of iron in tissues are prevented [19,20]. The liver-derived peptide hepcidin is the central regulator of iron homeostasis and recent animal studies have demonstrated that exposure to alcohol reduces hepcidin expression.This down-regulation of hepcidin in vivo implies that disturbed iron sensing may contribute to the hepatosiderosis seen in alcoholic liver disease [11].

Our case was deemed as hemosiderosis secondary to chronic alcoholism and combination of intestinal involvement and hemosiderosis in hepatic tissue further supports the relation between alcohol and hemosiderosis. On the other side, it was observed that iron levels are recovered to normal ranges when the patient quit alcohol, as indicated by one-year follow-up, and hemosiderin was not found in colonoscopic biopsy specimen, which was taken for control purpose.