Most infiltrative epithelial proliferations of the breast lacking a myoepithelial cell layer are malignant. The notable exception is Microglandular Adenosis (MGA). Lack of myoepithelial cells has also been noted occasionally in metaplastic apocrine glands. Here, we present a previously undescribed breast lesion that we have termed “Hypersecretory Thyroid-Like Adenosis” (HTLA). HTLA consists of multiple dilated glands of varying sizes preserving a lobulated architecture. The glands are lined by a single layer of bland cuboidal or columnar cells. Some nuclei have cleared chromatin, some exhibit grooves and others contain pseudo-inclusions reminiscent of papillary carcinoma of thyroid. Dense eosinophilic secretions, positive for PAS-Diastase and resembling thyroidal colloid, are present in many of the lumens. A thick basement membrane is present around each gland. There are no Myoepithelial (ME) cells present on H&E examination, immunohistochemistry or ultrastructural study. The immunohistochemical stain for S-100 protein shows weak focal nuclear and cytoplasmic staining of the minority of the luminal cells (<20% of cells). The lesion is ER negative. HTLA has some features similar to, but is overall distinctly different from MGA. In particular, the preserved lobular architecture, macroacinar structures, distinctive nuclear features, and lack of diffusely strong immunostaining for S-100 protein are features unlike MGA. This lesion was an incidental finding in a partial mastectomy performed for invasive ductal carcinoma but showed no spatial relationship, morphological or immunohistochemical similarities to the breast carcinoma.

The importance of Myoepithelial (ME) cells in differentiating benign from malignant breast lesions is well ingrained in the minds of most pathologists. Microglandular Adenosis (MGA), a controversial benign neoplasm, is the most well-known non-malignant entity devoid of a ME cell layer [1]. Recently, some metaplastic apocrine lesions have also been found to lack ME cells [2,3]. Furthermore, whether or not absence of myoepithelial cells in neoplastic lesions of the breast necessarily equates with stromal invasion has been controversial. This applies especially to encapsulated papillary carcinoma [2-5]. The role of ME cells in tumorigenesis has been the focus of much research in recent years [4-9]. In spite of this progress, their absence in benign lesions is still unaccounted for. Conversely, the presence of ME cells does not exclude malignancy as demonstrated by adenoid cystic carcinoma. Here, we describe a distinct, probably benign entity with thyroid-like colloid secretions in distended cystic glands lacking a ME cell layer. This lesion shares some cytological features in common with the previously described “breast tumor resembling the tall cell variant of papillary thyroid carcinoma” [10]. Given the regular use of myoepithelial cell immunohistochemical stains to help distinguish benign versus malignant lesions, it is important to note that which we describe here, similar to MGA, represents a distinct benign entity of the breast devoid of a myoepithelial cell layer.

A 47-year-old Iranian woman presented with a 3 cm palpable mass in the right breast close to the anterior axillary fold. There was also a palpable node within the right axilla. Core biopsies of both lesions were positive for invasive ductal carcinoma. A partial mastectomy and axillary dissection were performed. There was no evidence of systemic metastasis. Subsequently, she underwent four cycles of chemotherapy with adjuvant loco-regional radiotherapy. She remains disease-free 8 years post-operative.

The core biopsies of the palpable breast mass and axillary lymph node were both positive for an invasive ductal carcinoma Not Otherwise Specified (NOS). The subsequent partial mastectomy and axillary dissection revealed a Nottingham grade 3 invasive ductal carcinoma NOS measuring 2.9 cm in maximal dimension. There was extensive lymphatic invasion and 7/12 lymph nodes were positive for metastatic carcinoma. The tumor was ER and Her2 positive; PR was negative. There was a minor component of grade 3 Ductal Carcinoma In-Situ (DCIS) (Figure 1a and 1b). 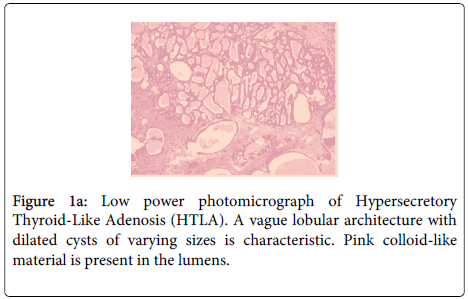 Figure 1a: Low power photomicrograph of Hypersecretory Thyroid-Like Adenosis (HTLA). A vague lobular architecture with dilated cysts of varying sizes is characteristic. Pink colloid-like material is present in the lumens. Immunohistochemistry confirmed the absence of ME cells (negative HCM, CK14, CK5/6, CD10, MSA and p63 staining) (Figure 2a). The immunostain for S-100 protein showed focal weak nuclear and cytoplasmic staining of luminal cells (20% of cells) (Figure 2b). The lesion was ER negative. Internal controls of normal breast lobules and ducts were present adjacent to the HTLA on each stained slide and these structures stained appropriately. Figure 2a: Absence of myoepithelial cell layer by p63 immunostaining. The dilated glandular structures of HTLA demonstrate complete absence of the myoepithelial layer. 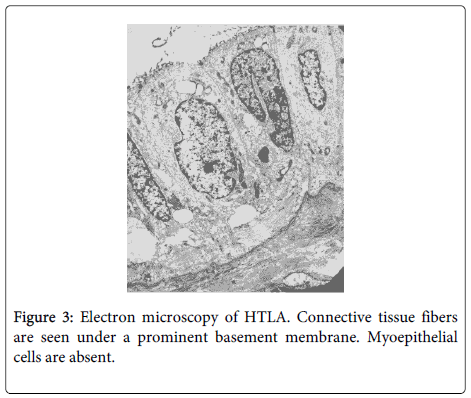 Microglandular Adenosis (MGA), thought to be a benign proliferation of the breast, is characterized by its lack of a myoepithelial cell layer [11-14]. It is an infiltrative lesion that has since been associated with an increased risk for the development of in-situ and invasive breast carcinoma [1,11-14]. Recently, absence of a myoepithelial cell layer has also been observed in some metaplastic apocrine glands [2,3]. Various studies have shown phenotypic alterations in ME cells associated with benign and in-situ lesions as compared to normal breast [4-8]. The interactive relationship between myoepithelial and luminal cells appears to be complex, with the integrity of the basement membrane being of prime importance in preventing malignant transformation [1,6-9].

This case displays an organoid lobular growth pattern and is devoid of cytologic atypia, necrosis and mitotic activity. No desmoplastic stromal reaction is present. All these features point to a benign process. Although a ME cell layer is absent, a basement membrane is seen around all the glandular structures. The PAS-Diastase positive eosinophilic secretion is much like colloid found in thyroid follicles. Such secretions have been described previously in “Cystic Hypersecretory Hyperplasia (CHH)” and “Cystic Hypersecretory DCIS (CH-DCIS)” of the breast, as well as in MGA [15-17]. Therefore, the term “hypersecretory” was used in the title of HTLA. Furthermore, like HTLA, these other hypersecretory entities are often ER-negative. HTLA have occasional pale nuclei with grooves and pseudo-inclusions that bear resemblance to the cytologic features of papillary thyroid carcinoma. These unusual nuclear features have been observed previously in the “breast tumor resembling papillary carcinoma of the thyroid” [10]. However, to our knowledge “hypersecretory thyroid-like adenosis of the breast” is a unique lesion that has not been reported previously.

HTLA is clearly distinct from MGA: MGA has an infiltrative pattern of small round tubules, often extending into the stromal adipose tissue. Large distended cystic structures in a lobular architecture are inconsistent with classical MGA. Furthermore, the nuclei of MGA are round, have a stippled chromatin pattern without chromatin “clearing,” and have distinct nucleoli. They lack grooves and pseudo-inclusions. S-100 consistently stains MGA strongly and diffusely unlike the focal and weak staining seen in HTLA [1,14]. However, similar to MGA, HTLA is ER negative. A comparison between these two lesions is summarized in Table 1. Interestingly, some metaplasic benign apocrine glands with no surrounding ME cells have also been found to be ER negative as one would expect for an apocrine lesion [3]. It has been suggested that the factor inducing this ER negativity might somehow contribute to the disappearance of the ME cells without disturbance of the basement membrane [3]. Another study showed that 15% of tested breast cancers exhibited partial myoepithelial differentiation but were ER negative [6]. In another words, there is an association between the loss of ER expression and the acquisition of myoepithelial characteristics in some breast cancer cells [6]. We regard such carcinomas as metaplastic carcinomas showing myoepithelial differentiation and most of these tumours are currently regarded as molecular “basaloid” breast carcinomas. Most metaplastic carcinomas are ER-negative and we do not think that the hormone receptor status of benign luminal breast epithelium explains the absence of myoepithelial cells in either HTLA, MGA or apocrine cysts. MGA is regarded by some as a pre-malignant process. Some cases of MGA evolve through MGA with atypia to invasive carcinoma [1,12]. Recent cytogenetic evidence of clonality in MGA suggests that it is a neoplastic, probably low-grade malignant, disorder rather than a hyperplasia [14]. Apocrine glands lacking ME cells have been deemed benign based on their cytological and architectural features [2,3]. Similarly, we believe HTLA to be a benign process based on the same criteria.

Whether or not HTLA has a similar potential to evolve into a malignant neoplasm is unknown. Although this case of HTLA was found incidentally in a partial mastectomy for high-grade invasive ductal carcinoma, we believe that these two lesions are unrelated. This is because they were located in different regions of the specimen, and the invasive ductal carcinoma was not only morphologically different, but was also ER and Her2 positive. As our patient was treated with chemotherapy and radiation therapy for her ductal carcinoma, it is impossible to know if the adenosis might have eventually transformed into a malignant tumor.

Other differential diagnoses include Cystic Hypersecretory Hyperplasia (CHH) and Cystic Hypersecretory DCIS (CH-DCIS). CHH and CH-DCIS are readily excluded from the differential diagnosis because they involve primarily large ducts rather than Terminal Duct Lobular Units (TDLUs). HTLA, on the other hand, resembles variably dilated and disorganized TDLUs. The pregnancylike “pseudo-lactational” variant of hypersecretory hyperplasia is a lobulocentric disorder and may show overlapping features with CHH [17-19]. This variant frequently contains calcific microspherules but the lining epithelium is characterized by marked cytoplasmic vacuolation, displacement of nuclei to the apex of the cells imparting a “hobnail” appearance, and scattered hyperchromatic nuclei that are not observed in HTLA [18,19]. Most importantly, HTLA lacks myoepithelial cells; myoepithelial cells have been demonstrated in the cystic hypersecretory lesions using both immunohistochemistry and electron microscopy [20,21]. Furthermore, the distinctive nuclear changes that resemble papillary carcinoma of thyroid seen in HTLA have not been noted in these other hypersecretory entities [22,23]. Tubular carcinoma is another differential diagnosis that is easily excluded by its infiltrative growth pattern, lack of colloid-like secretions, lack of prominent basement membrane, lack of large dilated ducts, lack of the distinctive nuclear features of HTLA, and ERpositive immunoprofile.

Thanks to Dr. Wayne Moore who helped us with the electron microscopy studies.

Copyright: © 2015 Hung T, et al. This is an open-access article distributed under the terms of the Creative Commons Attribution License, which permits unrestricted use, distribution, and reproduction in any medium, provided the original author and source are credited.