Copyright: © 2014 Bhat G, et al. This is an open-access article distributed under the terms of the Creative Commons Attribution License, which permits unrestricted use, distribution, and reproduction in any medium, provided the original author and source are credited.

Genus Iris has long history of use in various indigenous systems of medicine as alternative aperient, stimulant, cathartic, diuretic, gall bladder diseases, liver complaints, dropsy, purification of blood, venereal infections, fever, ringworms, bilious infections and for a variety of heart diseases. Rhizomes of genus Iris are rich source of secondary metabolites and most of these metabolites are reported to possess anticancer, antiplasmodial, anticholinesterase, enzyme inhibitor and immunomodulatory properties. In our study, high performance liquid chromatography with diode array detector coupled with electrospray ionization mass spectrometry (HPLC-DAD-ESI-MS/MS) method was established for simultaneous identification of flavonoids and other constituents in the rhizomes of three Iris species (Iris crocea, Iris germanica and Iris spuria) growing in Kashmir Himalayas, India. About twenty seven compounds were identified in these Iris species based on chromatographic retention time (tR), UV and MS/MS spectra and compared with those of isolated authentic compounds and literature data. About seven constituents (iridalglycoside 5b, iridalglycoside 7, irisquin B, irilin A, hesperetin, irisolone and irisolodone) were reported for the first time from Iris crocea. Our results demonstrate the developed method could be employed as a rapid and versatile analytical technique for identification of chemical constituents and quality control of Iris samples.

Genus Iris is well known rhizomatous herb belonging to family Iridaceae and is represented by 260 species [1]. Iris species have immense medical importance in indigenous systems of medicine and are used in the treatment of liver dysfunction, inflammation, bacterial and viral infections [2,3]. Externally root in powder or poultice is used as an application to sores and pimples [2]. Rhizomes of Iris nepalensis are used in Indian Indigenous System of medicine under the name of ‘Sosan’ for variety of heart diseases [4]. They are used as laxative, antidote, antispasmodic, emetic and haemoststic agents [5,6]. In traditional Chinese medicine (TCM) rhizomes of Iris dichotoma Pall. (called in Chinese ‘Bai She Gan’ or ‘Bai Hua She Gan’) have been used to treat inflammations and respiratory system disorders [7], as well as to clear heat and detoxify the organism [8]. The compounds isolated from various species are reported to possess antimicrobial, antioxidant, hepatoprotective, immunomodulatory, piscicidal, anticancer, antiplasmodial, antituberculosis, molluscicidal and antihelmintic properties [9-15].

Rhizomes of various Iris plants are rich source of bioactive molecules, which belong to flavonoids, xanthones, stilbenes, simple phenolics, iridal type triterpenoids, quinines and irones [16]. Isoflavonoids are the major constituents in almost all Iris species. About 50 different isoflavonoids in the form of diglucosides, triglucosides or aglycones, are reported in Iris [14,17-21]. Consumption of isoflavonoids are reported to reduce the risk of cardiovascular disease and cancer and have diverse biological activities like antimicrobial, oestrogenic and insecticidal [22,23].

Rhizomes of Iris crocea were collected from Yarikah (Tangmarg) region of Kashmir valley while the rhizomes of Iris spuria and Iris germanica were collected from Field station of Indian Institute of Integrative Medicine (CSIR) Srinagar of J & K. The plant species identified from Center for Biodiversity and Taxonomy (CBT), Department of Botany, University of Kashmir and voucher specimens were deposited.

In order to achieve good resolution and separation of isoflavonoids and other constituents in the rhizomes of Iris crocea , Iris germanica and Iris spuria , different HPLC conditions such as column temperature, mobile phase and detection wavelength were examined. We started with gradient profile of acetonitrile-methanol at the column temperature of 20°C and detection wavelength of 269 nm but it does not show good separation of peaks. This was followed by gradient solvent system of acetonitrile (B) and water (A) at column temperature of 25°C and detection wavelength 270 nm. This solvent system showed good resolution of peaks within specific time and was finally selected as mobile phase system for analysis. Further, addition of 0.05 % acetic acid in waters (A), chromatographic separation of marker compounds and extracts was greatly improved with sharper peaks. There was small variation in retention times because of complicated gradient solvent system.

For MS analysis both positive and negative modes of ESI were examined with the scan range ofm/z 100-1000. All the marker compounds showed [M - H]Â¯ and/or [M + H]+ / [M + Na]+ ions of abundance and were subjected to MS/MS analysis. For positive ion fragmentation in MS/MS, collision energy in the range of -5 V to -35 V was used while for negative ion fragmentation collision energy was in the range of +5 V to +35 V. Fragmentation of negative ions was found best at +35 V and for positive ions at -35 V and the resulting product ions were used as fingerprints of each molecule.

tR: Retention time.
Sh: shoulder peak.
aThe ion signals of this component investigated were not detected in this ion mode. MS/MS data obtained was used for structural identification of each marker compound. Most of these markers were isoflavonoids and their MS/MS data revealed some common features such as neutral loss of CH3, OCH3, H2O and loss of glucose residue in case of isoflavone glycosides. Elimination of CH3 indicates the presence of methoxy group while loss of CO is due contraction of C-ring [25]. Besides Retro-Diels- Alder (RDA) fragment ions (pathway I) were also observed, which are important for determination of substitutions on -A and -B rings of flavonoid nucleus. The mass spectrum (both ESI-MS and MS/MS) of tectorigenin both in positive and negative ion modes is shown in Figure 2. The molecular ion peak at m/z 301 [M + H]+ at -35 V in the positive ion mode showed MS/MS fragment ions at m/z 286 [M+H-CH3]+ and 258 [M+H-CH3-CO]+, while as molecular ion peak at m/z 299 [M - H]Â¯ in negative ion mode showed MS/MS fragment ions at m/z 283 [M-2H-CH3;]- and m/z 240 [M-2H-CH3-CO]Â¯. In our study, loss of CH3 radical was dominant fragmentation in positive ion mode in case of isoflavones due to formation of stable radical structure [7,25,26]. Besides diagnostic Retro-Diels-Alder (RDA) ions of tectorigenin were observed in positive ion mode at m/z 184 followed by loss of CH3 (m/z 168), due to cleavage of two C-C bonds of C-ring. These RDA fragments indicate the presence of a methoxy group in A-ring of tectorigenin. The possible fragmentation pathway of tectorigenin is shown in Scheme 1. 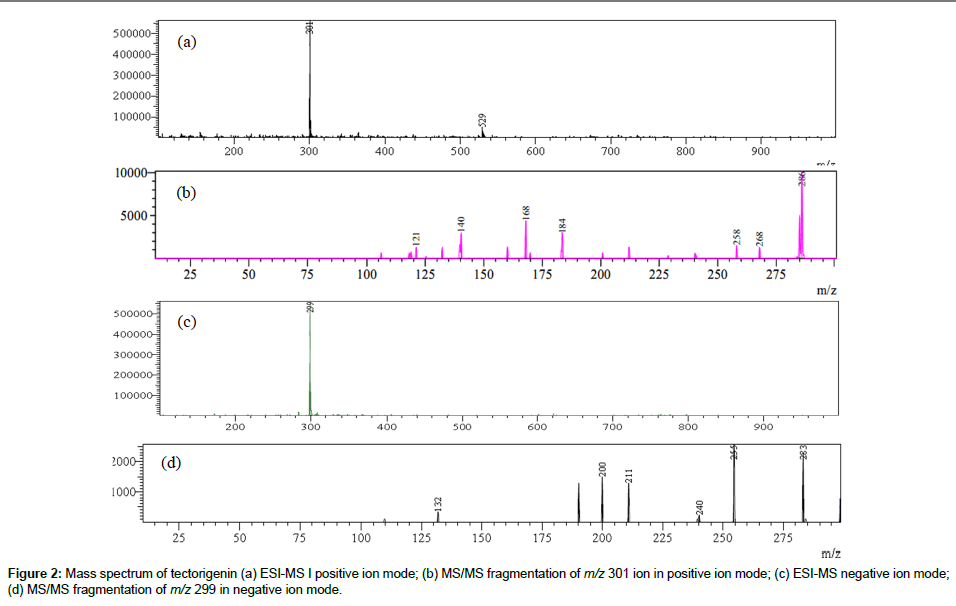 In Iris crocea 12 peaks in HPLC-DAD and HPLC-MS (TIC) chromatograms were identified as shown in Figure 3, Table 2. Only three peaks were identified by comparing their retention time (tR), UV spectra and MS/MS data with those of reference compounds. The other nine peaks were tentatively identified as Tectorigenin 4`-gentiobioside- 7-glucoside, Tectoridin 4`-glucoside, Iridalglycoside 5b, Iridalglycoside 7, irisquin B, Irilin A, hesperetin, irisolone and irisolodone, by comparing molecular weight, UV spectra and characteristic MS/MS data with reference to literature [16,19,20,27-33]. Rhizome of Iris crocea was found rich in isoflavones and most of these isoflavones showed common fragmentation pathway as described previously. For example the ESI-MS of irisolidone in positive gave molecular ion peak atm/z 315 and in negative ion mode at m/z 313. MS/MS of both molecular ion peaks showed successive loss of two methyl residues which indicates the presence of two methoxy groups. In addition, there was neutral loss of CO which shows molecular ion peak at m/z255. RDA fragments were also observed in MS/MS of both positive and negative ion mode. The mass spectrum (MS & MS/MS) in both positive and negative ion mode is shown in Figure 4. 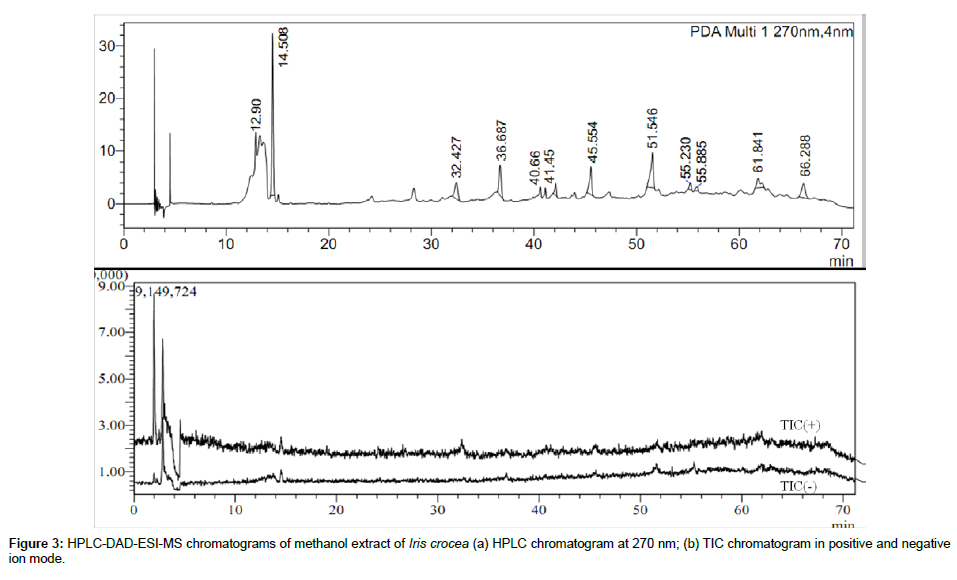 In Iris germanica about 10 constituents were tentatively identified, including 9 isoflavonoids, one xanthone and one stilbene. Only four constituents i.e., picied, tectorigenin 4`-glucoside, iridin and irigenin were identified by comparing their retention time, UV spectra, molecular weight and MSMS with that of reference compounds. The other six constituents i.e., mangiferin, germanaism B, germanaism A, irilone-4`-glucoside, irisolidone 7–glucoside and irisolone, were tentatively characterized on the bases of UV λmax, molecular weight and mass spectrum with reference to literature [18,19,36]. The HPLC-DAD chromatogram and TIC chromatogram in positive and negative ion modes of methanol extract of Iris germanica is shown in Figure 5. The identified compounds in rhizomes of Iris germanica are given in Table 3. 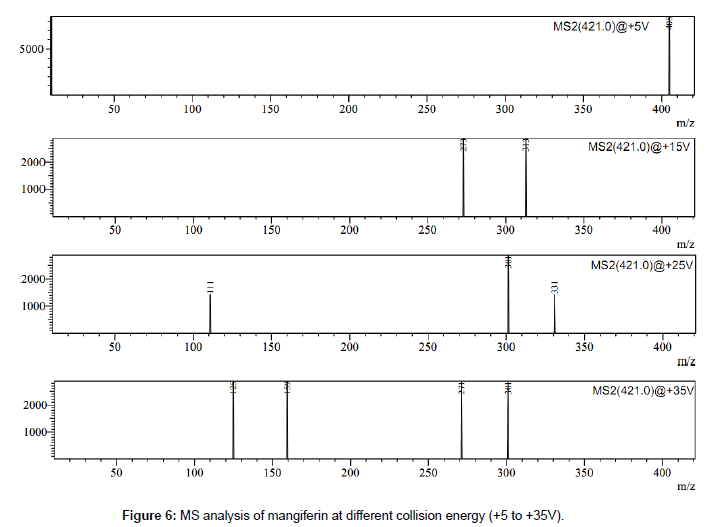 The HPLC-DAD chromatogram and total ion chromatogram of methanol extract of rhizomes of Iris spuria in both positive and negative ion modes are shown in Figure 7. A total of 13 constituents were identified including 10 flavonoids, 2 iridalglycosides and one rotenoid. Four compounds were unambiguously identified by comparing retention time (tR), UV and MS data with those of reference compounds, while other eleven peaks were tentatively identified and characterized on the basis of MS/MS fragmentation and UV spectra obtained by HPLC-DAD-ESI-MS/MS and by comparing with literature data [16,19,25-29,39]. The UV λmax, retention time (tR) and MS/MS fragments in both positive and negative ion modes of all identified compounds in methanol extract of Iris spuria is given in Table 4. Previously we have reported the hepatoprotective activity of LC-MS standardized Iris spuria extract and the sample for that was collected in the month of November, while in our study all the samples were collected in the month of March. It is worth to mention that the time of collection and processing plays an important role as is evident from our previous work on Iris spuria [10]. Based on the above data it was found that isoflavones and their glycosides are main constituents in the rhizomes of Iris spuria . In MS/MS data of isoflavone glycosides there was successive loss of one or more hexose residues (162 Da) which indicates the presence of one or more hexose residues. This successive loss of hexose units is characteristic of O-glycosides [40]. For example the molecular ion peak of tectoridin 4`-glucoside (a diglucoside of tectorigenin) at m/z 623 in negative ion mode showed the MS/MS fragments at m/z 461 and m/z 298, due to successive loss of two glucose units as shown in Figure 8. Further some neutral losses of CH3, CO and H2O in both positive and negative ion modes was observed in almost all compounds in Iris spuria . Most of the fragmentation pathways were identical to those observed by Shawl et al. (1985), Plazonic et al. (2009), Zhang et al. (2011), Shu et al. (2010) and Chen et al. (2009) [33,37,40-42]. Two iridalglycosides (iridalglycoside 5b and 7) were also identified in Iris spuria. Both have identical UV λmax=257 nm, which is characteristic for iridal ring system with α, β-unsaturated aldehyde group [29].

Tectorigenin is reported to possess promising analgesic, anti- inflammatory, hepatoprotective and aldose reductase inhibitory activities [43-45]. In our study tectorigenin was found to be major isoflavone and its 4`-glucoside was identified in all the three Iris species. Chemical structures of all the identified compounds in Iris crocea , Iris germanica and Iris spuria is given in Figure 9. A simple and versatile analytical method was developed for qualitative identification of major constituents in the rhizomes of Iris crocea, Iris germanica and Iris spuria , by using HPLC-DAD-ESI-MS/ MS in both positive and negative ion modes. About 27 constituent including isoflavones, isoflavone glycosides, xathones, flavones, rotenoids, iridalglycosides, alkylated benzoquinones and stilbenes, were identified based on retention time (tR), UV and MS spectra compared with those of authentic compounds and literature data. In our study isoflavone glycosides were found major constituents. These isoflavone glycosides could be considered as chemotaxonomic markers of these Iris species. This method was successfully applied to identify 8 constituents in rhizomes of Iris crocea, which were not previously reported from this species. Due to high sensitivity of this method, some constituents in minor amount were also identified. Furthermore, the results demonstrate that this method could provide full qualitative information of genus Iris. Further use of innovation studies like MALDI-TOFD-MS and HPLC-DAD-ESI-MS/MS-NMR are necessary for detection and characterization of minor/unidentified compounds.

The authors have declared no conflict of interest. 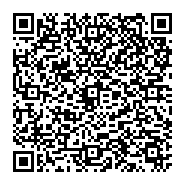