Copyright: © 2014 Luna LG, et al. This is an open-access article distributed under the terms of the Creative Commons Attribution License, which permits unrestricted use, distribution, and reproduction in any medium, provided the original author and source are credited.

Mass spectrometry (MS) offers an exciting possibility as a highly specific method for measuring vitellogenin (VTG) concentrations in toxicity tests that are aimed at evaluating perturbations in the endocrine system. Typically MS approaches to protein quantification attempt to measure intact proteins or rely on enzymatic digestion procedures to reduce the size of the protein into smaller peptide fragments which can be utilized as biomarkers for quantification. With the latter approach, the MS technique allows both the direct measurement of the VTG intact peptide biomarker mass-to-charge ratio and the generation of peptide fragmentation data for further confirmation in complex matrices. In this study we utilize trypsin digestion and a C18 Zip Tip clean-up method to generate predictably cleaved peptides to identify VTG biomarkers from small quantities of plasma collected from the African clawed frog (Xenopus laevis). From the 201,545 Da X. laevis VTG precursor protein, results indicate 2 peptides which would be excellent biomarker candidates for the quantitative measurements of VTG. This methodology may be particularly useful in the context of the Larval Amphibian Growth and Development Assay, a Tier 2 test which is currently under development as a part of the United States Environmental Protection Agency’s Endocrine Disruptor Screening Program.

Since the 1980’s there has been a dramatic increase in scientific regulatory and public awareness of the presence of endocrine disrupting chemicals in the environment. In the scientific regulatory arena, the EPA’s Endocrine Disruptor Screening Program (EDSP) uses a tiered approach for determining whether a substance may have an effect that is similar to those produced by naturally occurring estrogen, androgen, or thyroid hormones. The Tier 1 screening includes a battery of eleven assays that, when interpreted in a weight of evidence approach, can assess the potential for interaction with the estrogen, androgen, or thyroid hormone systems. Chemicals that go through Tier 1 screening and are found to have the potential to interact with the estrogen, androgen, or thyroid hormone systems will potentially proceed to Tier 2 testing of the EDSP. Tier 2 testing is intended to confirm and characterize the effects observed in Tier 1 tests as well as to establish a quantitative relationship between the dose and the observed effect(s). Currently, the US EPA is still in the process of developing and validating the EDSP Tier 2 tests. One biomarker of interest in the Tier 2 Larval Amphibian Growth and Development Assay (LAGDA) is expression of vitellogenin (VTG). VTG is a yolk precursor glycolipophosphoprotein that is secreted in the liver of oviparous (egg laying) vertebrates. It is generally agreed that a change in VTG levels is a good indicator for estrogenic and potentially anti-estrogenic effects, and it is proposed as one of several endpoints in the LAGDA. Due to the small size of the developing frogs that are assessed in the LAGDA, only limited amounts of blood can be obtained from individuals (10-50 μl). As a result, sensitive and selective analytical methods are necessary.

A number of analytical methods have been developed for the quantification of VTG in plasma, liver and tissues [1-6]. These various methods differ in safety, sensitivity, specificity, and technical difficulty. Nevertheless, the most accepted approaches to measure VTG are from of an enzyme linked immunosorbent assay (ELISA) [4] or the utilization of a radioimmunoassay (RIA) [6]. However for amphibian screening the ELISA and RIA assays suffer from the lack of commercial antibodies for test species like Xenopus laevis.

In contrast to utilizing antibodies for quantitative measurements, mass spectrometry (MS) presents an exciting possibility for becoming a reference method for quantifying VTG in amphibian assays. Typically MS approaches to protein quantification, like VTG, attempt to measure the intact protein directly or rely on enzymatic digestion procedures to reduce the size of the protein into smaller fragments called peptides [7,8]. With the enzymatic digestion approach, the MS technique allows both the direct measurement of the VTG intact peptide biomarker mass-to-charge ratio and the generation of peptide fragmentation data for further protein confirmation in complex matrices. Quantitative measurements utilizing a signature peptide approach with liquid chromatography tandem mass spectrometry (LC/MS/MS) has been developed for the fathead minnow VTG protein [9].

Synthesis of VTG target peptides: Unlabeled X. laevis VTG peptides identified from the in silico trypsin digestion were synthesized by Celtek Peptides (Franklin, TN), purity for all peptides were >97% via HPLC method. One mg/mL stock solutions of each candidate VTG peptides were prepared in ultrapure water.

Test species: Sexually mature X. laevis females were removed from their husbandry tanks and anesthetized in a solution of MS- 222 buffered to a pH of approximately 7 with sodium bicarbonate. Following anesthesia, blood was collected via cardiac puncture using heparin-coated 26 ½ gauge needles attached to a syringe. After a sufficient amount of blood was collected (approximately 1 mL), frogs were euthanized (while still anesthetized) by severing the spinal cord. All housing and treatment of the frogs was performed under the oversight of the Institutional Animal Care and Use Committee at an Association for Assessment and Accreditation of Laboratory Animal Care (AAALAC) certified laboratory. Blood was immediately placed on ice and then centrifuged (735×g for 10 minutes) to remove red blood cells from the plasma. Plasma was stored at -80°C prior to its use for biomarker identification experiments by mass spectrometry.

X. laevis plasma trypsin digestion: Adult femaleX. laevis plasma was removed from the -80°C freezer, brought to room temperature and subsequently vortex-mixed. A 10 μL aliquot of the adult femaleX. laevis plasma was added to a clean microfuge tube. A 10 μL aliquot of 0.1% Rapigest (Waters Corporation, Bedford, MA) in 50 mM ammonium bicarbonate was added to the microcentrifuge tube containing the plasma and vortex-mixed. The microcentrifuge tube containing the X. laevis plasma and Rapigest was incubated at 100°C on a heated block for 5 minutes to solubilize proteins and to enhance susceptibility to enzymatic cleavage without inhibiting enzyme activity. Samples were removed from the heat block, briefly microfuged and allowed to cool to room temperature. A 20 μL aliquot of sequencing grade modified trypsin (Promega Corporation, Madison, WI, ~1:40 protease: protein ratio) was added to the microcentrifuge tube, vortex-mixed and incubated overnight at 37°C.

VTG labeled internal standards: 13C and 15N labeled synthetic standard peptide stocks of GEGIEEFLR(+10) and QVLQVTPFAER(+10) (New England Peptide, Garnder, MA, purity for ISTDs were >95% via HPLC method) were prepared in ultrapure water to provide a concentration of 1 mg/mL. The 1 mg/mL solutions were further diluted 1:100 and 1:1000 in ultrapure water to provide working stocks of 10 μg/mL and 1 μg/mL respectively. The stocks solutions were stored at -80°C until needed.

The analytical column utilized was an AdvanceBio Peptide Map, 2.1×150 mm, 2.7 μm particle size (part number 653750-902, Agilent, Santa Clara, CA). The aqueous mobile phase (A) consisted of Ultrapure (18 MΩ) water with 0.1% formic acid, while the organic phase (B) was ACN with 0.1% formic acid. The autosampler was programmed to deliver a 20 μL injection. A gradient profile was utilized at a flow rate of 350 μL/min. Initially, the mobile phase consisted of 88% A and 12% B and held for 2 minutes. A 3.25% change per minute was utilized over the next 8 minutes where the mobile phases had a final composition of 62% A and 38% B, respectively. At 10 minutes, the gradient was stepped to 98% B for 5 minutes to clean the column and then stepped to 88% A and 12% B for the next 10 minutes to re-equilibrate the column to initial conditions. The total run time was 25 minutes per sample. The column eluent was introduced into a 4000 QTRAP (AB/Sciex, Foster City, CA) mass spectrometer with a turbo ion spray interface.

Selection of the targetX. laevis VTG peptide biomarkers were based on several factors including host specificity of the peptide and a sequence of 7-12 amino acids following digestion. Other factors included the absence of: 1) Methionine, cysteine or tryptophan amino acids in the sequences which can be oxidized either in vivo or during sample processing; 2) Three or more repeating residues; and 3) A peptide that contained acid labile aspartic acid (D) and proline (P) pairs. Furthermore, theoretical percent cleavage probabilities of less than 100% with the digestion enzyme trypsin were discarded as biomarker candidates in order to maintain target biomarker stability and detection [11]. Utilizing these criteria, resultingX. laevis VTG peptide candidates from the in silico trypsin digest are listed in Table 1. 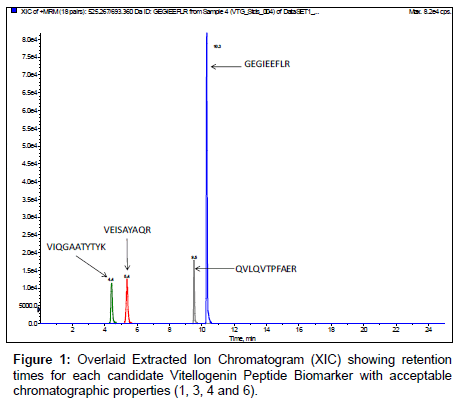 The MS/MS Fragment Ion Calculator (Institute of Systems Biology) was utilized to generate theoretical b and y ions (peptide fragment ions that extend from the N-terminus and C-terminus respectively) from the intact precursor ion for each candidate VTG peptide biomarker. The amino acid sequence tag was determined from fragmentation ions generated from the EPI trap scans. The difference between specific fragmentation y and b ions represents the masses of amino acid residues. Prior to LC/MS/MS analysis,X. laevis plasma digests were cleaned up to remove components such as unwanted matrix from the plasma, sample buffers, salts and other additives added during the sample preparation of the trypsin digest. A C18 ZipTip, 10 μl pipette tip with a standard 0.6 μL bed of C18 silica based medium fixed at its tip, was utilized to desalt, enrich and purify theX. laevis plasma trypsin digests. Typically purification of tryptic peptides with the C18 ZipTip results in high recovery, however the capacity of the C18 ZipTip is limited as only up to 5 μg digested protein can be loaded per ZipTip without losses. Therefore five C18 ZipTips were utilized on the sameX. laevis plasma trypsin digest and eluates combined to confirm the VTG peptide biomarkers. A representative extracted ion chromatogram (top) and an EPI trap scan is presented in Figure 2 for the VTG peptide biomarker synthetic standard GEGIEEFLR (bottom), while Figure 3 shows a representative extracted ion chromatogram (top) of the VTG peptide biomarker candidate GEGIEEFLR from an adult femaleX. laevis trypsin digest cleaned-up with C18 ZipTips (bottom). From the fragmentation ions generated we can validate that the peptide monitored is GEGIEEFLR from the adultX. laevis tryptic peptide digest. We also validate the peptide biomarker QVLQVTPFAER (Figures 4 and 5). The VTG candidate biomarkers VIQGAATYTYK and VGISAYQR were detectable in the adult femaleX. laevis trypsin digest, but qualitatively at much lower levels than GEGIEEFLR or QVLQVTPFAER peptide biomarkers. Thus Table 3 lists the precursor ion as well as the three most intense fragmentation (product) ions results for the two most intense VTG peptide biomarkers. 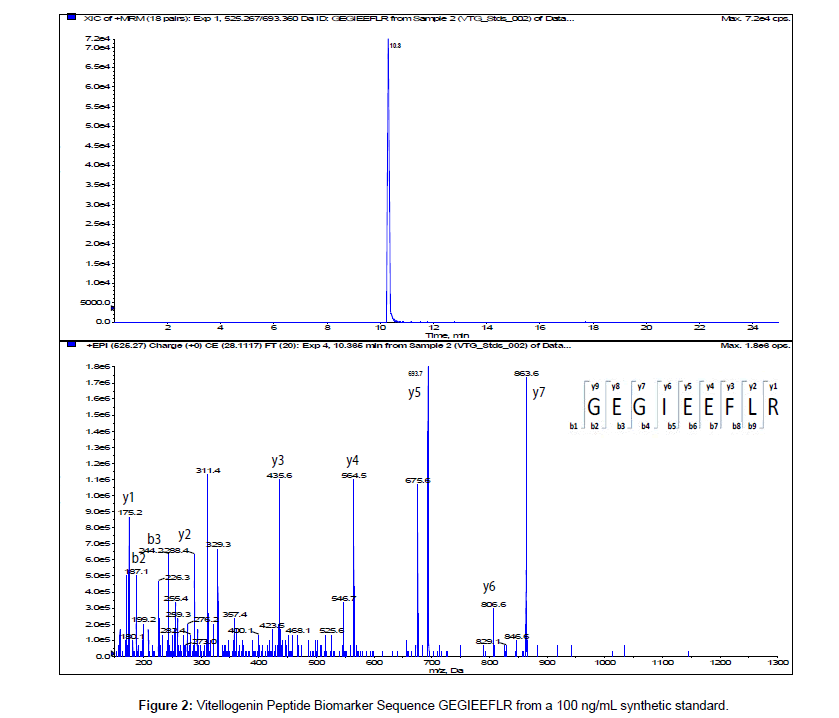 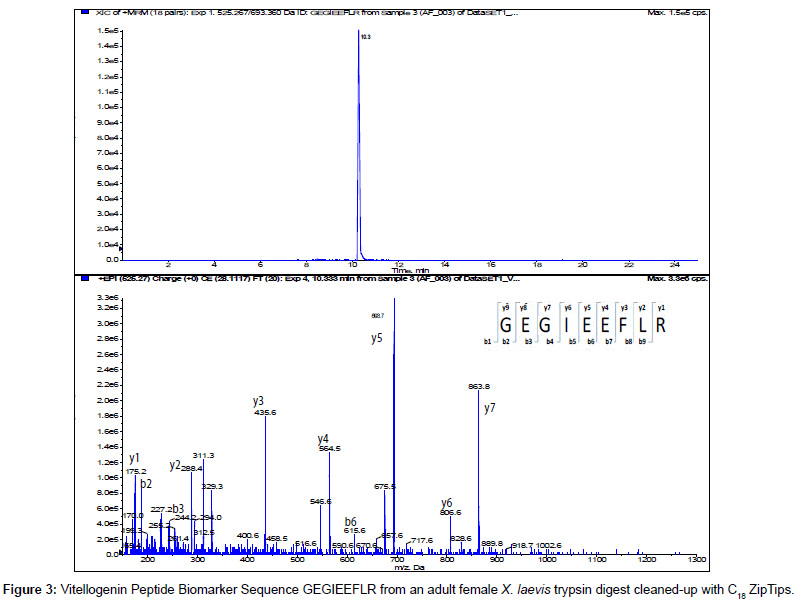 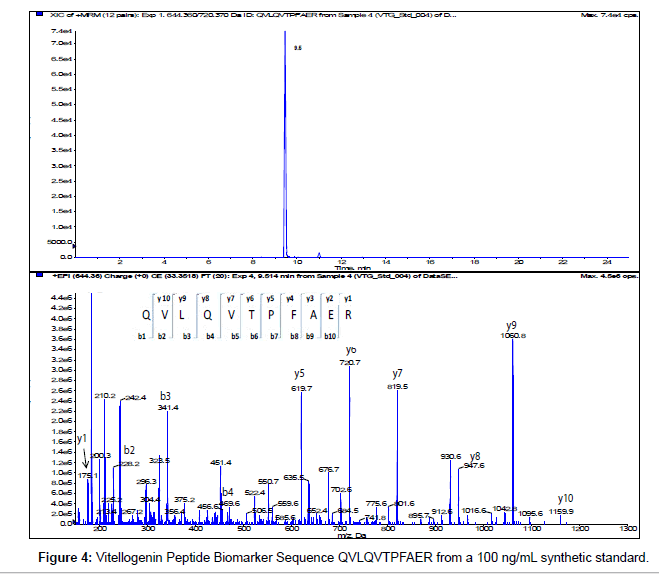 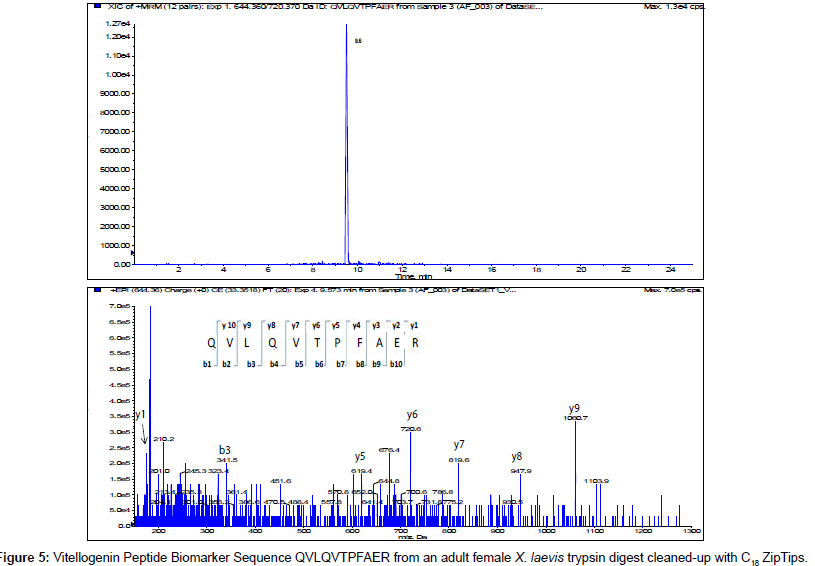 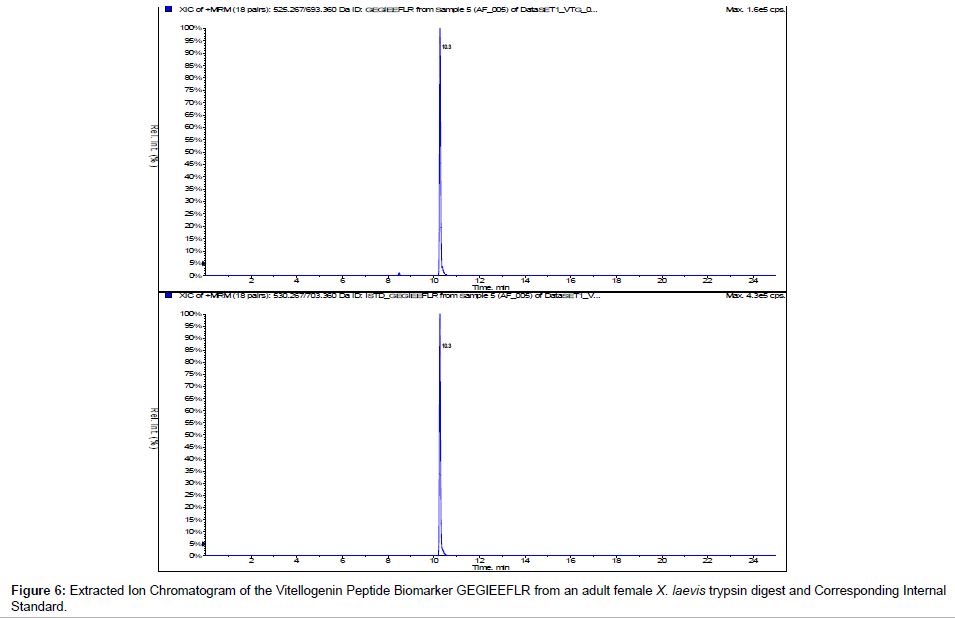 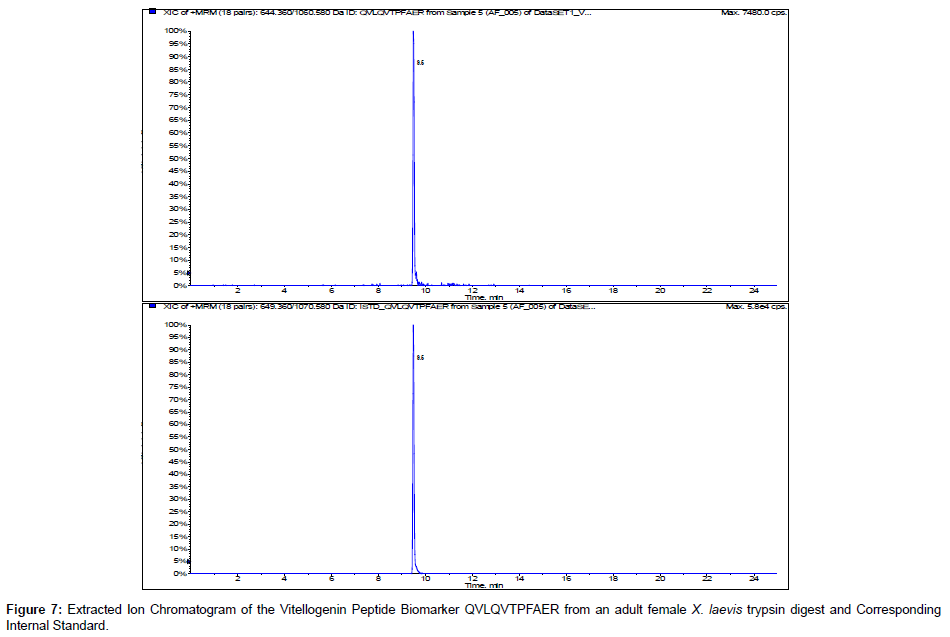 We thank The Dow Chemical Company for funding this research