Copyright: © 2014 Mizukami K, et al. This is an open-access article distributed under the terms of the Creative Commons Attribution License, which permits unrestricted use, distribution, and reproduction in any medium, provided the original author and source are credited.

An 84-year-old male who had been habitually taking nonsteroidal anti-inflammatory drugs for low back pain was taken to the hospital due to loss of consciousness together with massive bloody bowel discharge. Emergency gastrointestinal endoscopy and colonoscopy revealed bleeding from the distal ileum. He was then referred to our hospital since small bowel hemorrhage was suspected. Capsule endoscopy was performed after abdominal contrast-enhanced computed tomography did not clearly reveal the origin of the hemorrhage. Six hours after ingestion of the capsule endoscopy, a real-time viewer was used to confirm that there was no hemorrhage in the upper half of the small bowel. Double balloon endoscopy with a transanal approach revealed the presence of blood in the entire large bowel and numerous small ulcers in the distal ileum. Hemostatic treatment of an ulcerative lesion involving an exposed blood vessel located 100 cm proximal to the ileocecal valve was performed (Figures 1 and 2). Since the capsule endoscopy and the balloon endoscopy met exactly at the lesion area (Figure 3), the endoscopic treatment was visualized by the capsule endoscopy (Figures 4). 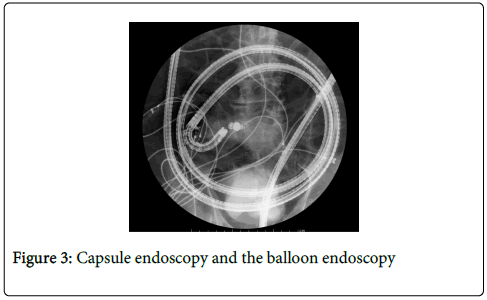 Capsule endoscopy and small bowel endoscopy have greatly improved the diagnosis of the small bowel region. These diagnostic yields are more effective than other modalities, and these are central to the present algorithmic approach of small bowel hemorrhage [1], while tests for overt-ongoing bleeding are considered to be a significant factor in identifying the origin of the hemorrhage [2]. Regarding our cases, we performed capsule endoscopy and double balloon endoscopy on the same day for the early identification of the origin of the hemorrhage. In this case, the capsule endoscopy approaching from the upper gastrointestinal tract and the balloon endoscopy approaching from the lower gastrointestinal tract coincidentally met at the lesion area, which resulted in very rare images that we would like to report.