Copyright: ©2016 Rastogi R, et al. This is an open-access article distributed under the terms of the Creative Commons Attribution License, which permits unrestricted use, distribution, and reproduction in any medium, provided the original author and source are credited.

Intrahepatic gall bladder (GB) is an uncommonly encountered condition in clinical practice characterised by ectopic location of GB within the hepatic parenchyma. This condition not only produces difficulty in clinical diagnosis of various GB diseases especially cholecystitis and carcinoma but also in their management including cholecystectomy. Hence, this article discusses imaging diagnosis as well as the clinical difficulties faced in patients with this rare anomaly.

Various anomalies of GB including agenesis have been described in medical literature [1,2]. Among these, ectopic position of GB is rare with an estimated incidence of 0.1-0.7% and includes intrahepatic, suprahepatic, retrohepatic, supra-diaphragmatic, retroperitoneal, within the falciform ligament, within abdominal wall musculature, left-sided and intrathoracic locations [3,4]. Very few cases of intrahepatic GB (IHGB) have been reported in medical literature posing diagnostic and management difficulties [5,6]. Hence, this condition should be diagnosed on imaging studies serving as a roadmap for future course of action.

A 58-year old female presented to outpatient department of our hospital with nonspecific, mild to moderate, diffuse pain abdomen of 2-3 days without history of loose motions or vomiting.

No history of fever was given. Laboratory findings were remarkable. Ultrasonography (USG) of abdomen was then advised to rule out other causes of acute abdomen. USG of abdomen did not reveal any cause for the presenting symptoms. However, the GB was not seen in its usual infra-hepatic location.

Careful scanning revealed ectopic location of GB within the right hepatic lobe with its fundus reaching superiorly almost up to the subcapsular location without obvious intraluminal abnormality (Figure 1). Figure 1: A-B; Transabdominal UGS scans in sagittal (A) and axial (B) planes show intrahepatic gall bladder with its fundus reaching almost up to the hepatic capsule (arrows depict the right hemidiaphragm).

Magnetic resonance cholangiopancreatography (MRCP) was then performed to confirm the USG findings. MRCP revealed an intrahepatic location of GB in the right lobe with its fundus reaching up to the hepatic surface and draining through short cystic duct in to the right hepatic duct (Figure 2). No evidence of any obvious intraluminal pathology was noted. 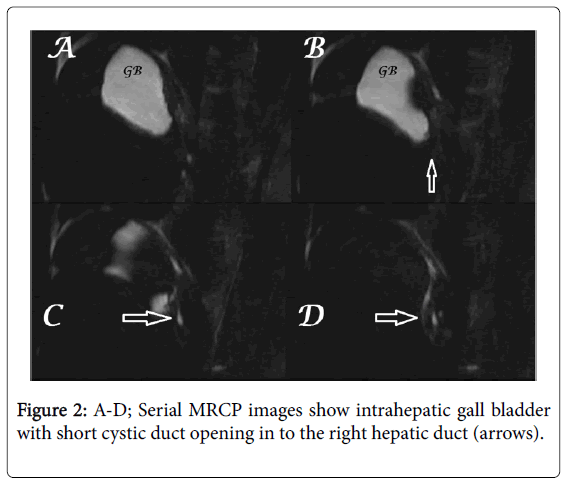 Based in imaging studies, complete intrahepatic GB without obvious intraluminal abnormality was made.

IHGB is a rare condition characterised by partially or completely embedded GB within the hepatic parenchyma, making diagnosis of cholecystitis clinically difficult. It may present as a hepatic abscess secondary to perforated GB/cholecystitis/choledocholithiasis [7]. Preoperative diagnosis of IHGB is very important to guide the laparoscopic surgeon for cholecystectomy in avoiding hepatobiliary injuries.

During embryological development, GB is intrahepatic which migrates later to become extrahepatic. Hence, IHGB represents congenital arrest in migration of GB during intrauterine life. Most IHGB are partial in nature with their variable portion bulging out of the hepatic parenchyma. IHGB is usually associated with biliary stasis due to inefficient emptying leading to cholelithiasis which is a presentation in more than half of patients [5].

Imaging including USG can easily identify this condition, but MRCP is considered as a gold standard imaging tool for all biliary tract anomalies as it provides complete and exquisite details. On radionuclide scintigraphy using sulphur colloid, IHGB appears as a cold defect within the hepatic parenchyma [5] (Figure 3). Partial IHGB can be easily identified during surgical procedure but complete IHGB presents a surgical challenge. In latter cases, identification of cystic duct is a key as it needs to be traced to reach GB within the hepatic parenchyma. Though intrahepatic GB is an uncommon anomaly yet its recognition on imaging deserves special mention in cases of cholelithiasis for avoiding inadvertent injury to liver and biliary tract. It is also important to document the condition without GB disease so as to avoid clinical dilemma in future. 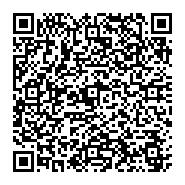