Importance of Fibronectin for Clostridium perfringens Adhesion to Host Tissue

Importance of Fibronectin for Clostridium perfringens Adhesion to Host Tissue

Clostridium perfringens, a Gram-positive, spore-forming, obligate anaerobe, is the cause of gas gangrene and food poisoning. Colonization of the host requires adhesion of bacterial cells to injured tissue. We review here recent results regarding the role of fibronectin in the interaction of C. perfringens cells with host collagens.

Fn is a major plasma component, and is also a ubiquitous extracellular matrix protein. Fn plays a pivotal role in many cellular processes, including wound healing, tissue structure formation, and cell migration [3]. Fn is a disulfide-linked homodimeric glycoprotein of approximately 450 kDa, with each Fn monomer consisting of three types of repeating modules: 12 type I, two type II, and 15-17 type III (Figure 1). The N-terminal domain is composed of five type-I modules (I1-5), which correspond to the sites of binding for most bacterial Fn-binding proteins (Fbps) [4], and an adjacent gelatin-binding domain containing four type-I modules and two type-II modules (I6II1-2I7-9). The central part of the Fn polypeptide is composed of 15-17 type-III modules, including the region (III10) responsible for binding of host cells. In contrast to both type-I and type-II modules, type-III modules lack intramodular disulfide bonds.

Figure 1: Schematic representation of the modular structure of the Fn protein.

Tissue injury is usually accompanied by bleeding, leading to coating of connective tissue with Fn, which promotes tissue reconstitution. Given the importance of Fn for the binding of C. perfringens cells to collagens, two questions arise.

The second question is, what site on the Fn molecule is bound by the bacterial Fn receptors? To elucidate this domain, we employed several anti-Fn monoclonal antibodies that recognize distinct epitopes [6]. Among these reagents, the HB39 monoclonal antibody (IgG isotype), which has been shown to recognize the III9-10 region of Fn, was found to inhibit Fn binding by C. perfringens cells. Furthermore, Fn binding by C. perfringens cells was competitively inhibited by the recombinant III9 fragment of Fn (rIII9), but not by rIII2-4, rIII5-7, rIII8, or rIII10 fragments. Moreover, C. perfringens cells bound weakly, but significantly, to microplate wells coated with either rIII9 or rIII10. In contrast, bacterial cells never bound to wells coated with rIII2-4, rIII5-7, or rIII8. These results suggest that the Fn receptor(s) on C. perfringens cells recognize the III9-10 region of Fn. 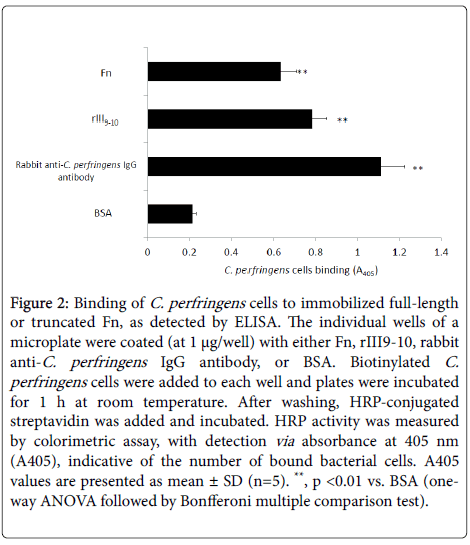 Figure 2: Binding of C. perfringens cells to immobilized full-length or truncated Fn, as detected by ELISA. The individual wells of a microplate were coated (at 1 µg/well) with either Fn, rIII9-10, rabbit anti-C. perfringens IgG antibody, or BSA. Biotinylated C. perfringens cells were added to each well and plates were incubated for 1 h at room temperature. After washing, HRP-conjugated streptavidin was added and incubated. HRP activity was measured by colorimetric assay, with detection via absorbance at 405 nm (A405), indicative of the number of bound bacterial cells. A405 values are presented as mean ± SD (n=5). **, p <0.01 vs. BSA (one-way ANOVA followed by Bonfferoni multiple comparison test).

Although most bacterial FBPs have been shown to bind the N-terminus of Fn [4], several Fn receptors that bind to the III9-10 region of Fn have been identified, including the Yersinia pestis Ail protein [7] and the Pasteurella multocida PM1665 protein [8]. Ail and PM1665 reportedly bind to III9 and III9-10, respectively. Notably, Ail is critical for the delivery of cytotoxic Yop proteins to host cells and is a major virulence factor for Y. pestis pathogenesis [9]. It will be of interest to determine whether III9-10-mediated Fn binding by C. perfringens cells affects the toxin secretion and/or virulence of this bacterium.

The III10 region contains a unique peptide sequence, RGD that interacts with integrins on the host cell surface [10]. Thus, it is possible that Fn-bearing C. perfringens cells can escape from integrin-mediated binding to host cells, contributing to evasion of immune surveillance. Further work will be needed to assess the biological significance of Fn binding by C. perfringens in the context of the pathogenesis of clostridial gas gangrene and food poisoning.

Copyright: © 2018 Hitsumoto Y, et al. This is an open-access article distributed under the terms of the Creative Commons Attribution License, which permits unrestricted use, distribution, and reproduction in any medium, provided the original author and source are credited.