Copyright: © 2015 Nfonsam VN, et al. This is an open-access article distributed under the terms of the Creative Commons Attribution License, which permits unrestricted use, distribution, and reproduction in any medium, provided the original author and source are credited.

Colorectal cancer (CRC) is the second leading cause of cancer related deaths in the United States [1,2]. The American Cancer Society estimates that in 2015 about 132,700 people will be diagnosed with colorectal cancer and about 49,700 patients will die from this disease [3]. Although the overall CRC incidence and mortality have been declining in both men and women since about 1990 [4], most likely due to progressive improvements in population screening, several recent studies have shown alarming increase in the incidence of CRC in patients younger than 50 [5,6]. CRC incidence among patients younger than 50 years ranges from 0.85 per 100,000 for the age group 20-24 to 28.8 per 100,000 for the age group 45-49 [6]. Recent studies that used the Surveillance, Epidemiology, and End Results (SEER) database have shown that more than one-tenth of the newly diagnosed CRC cases (11% of colon cancers and 18% of rectal cancers) have a young onset and that the associated mortality rates for those with young-onset CRC have been increasing by approximately 2% annually since 2009 [6-9]. By contrast, the age-adjusted mortality rates have shown decreasing trends in older patients by 2% to 3% annually between 1992 and 2009 [2,4].

We obtained the following data points from the registry: age at diagnosis, gender, race, location of colorectal cancer, and stage of disease. The age of diagnosis was categorized as 0-29 years of age, and then arranged in increments of 10 years to 85+ years old for incidence of colon, rectal, and overall CRC. We compared these variables for patient’s older (≥50yrs) and younger (<50yrs) to assess: 1. Incidence in the two age subsets, and 2. Stages of presentation of colon cancer for years 2005-2010.

Statistical analysis was performed using SAS 9.4.We performed linear regression analyses testing the correlation between year of diagnosis and incidence of disease overall and for several subgroups. We used a chi square test to compare the distribution of stages of colorectal cancers for under and above 50. Standardized residuals were computed to assess the deviation from the null hypothesis of no difference between younger and older patients. A p-value ≤ 0.05 was considered statistically significant. 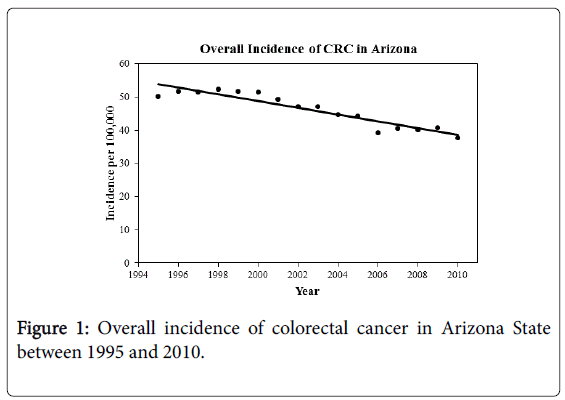 Figure 1: Overall incidence of colorectal cancer in Arizona State between 1995 and 2010. 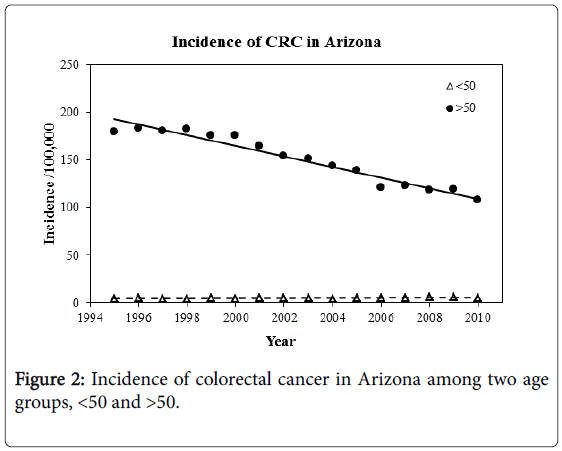 Figure 2: Incidence of colorectal cancer in Arizona among two age groups, <50 and >50. 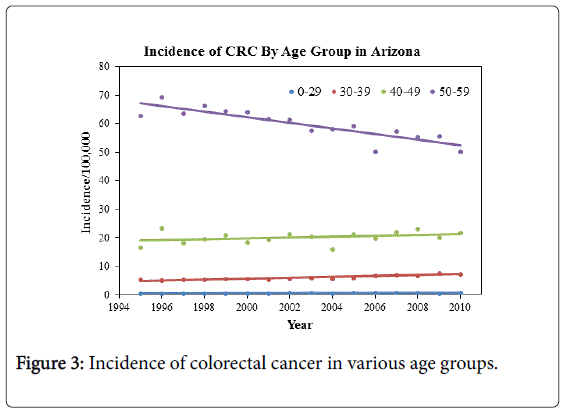 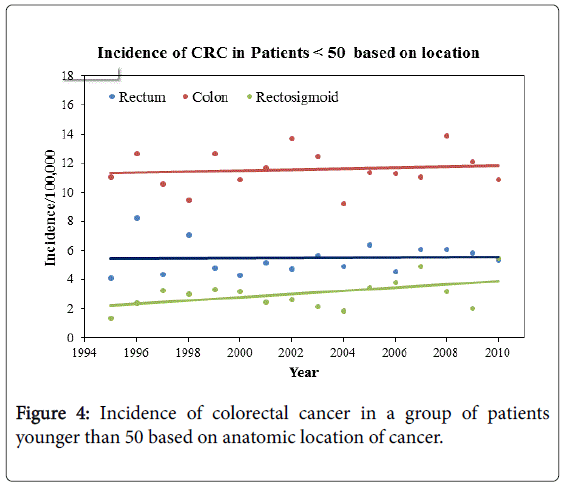 Figure 4: Incidence of colorectal cancer in a group of patients younger than 50 based on anatomic location of cancer.

In patients under the age of 50, 39% of patients presented with stage IV disease, followed by stage I disease in 27% of the patients. CRC Stage II and III occurred in 21% and 13% of the patients, respectively. Age based (<50 years vs. >50 years) comparison of the grades of CRC in presentation, we observed that the younger age group was more likely to present with stage IV disease compared to its older counterparts (23.5% vs. 16.5%; p<0.001). Figure 5 highlights the results using standard residuals. 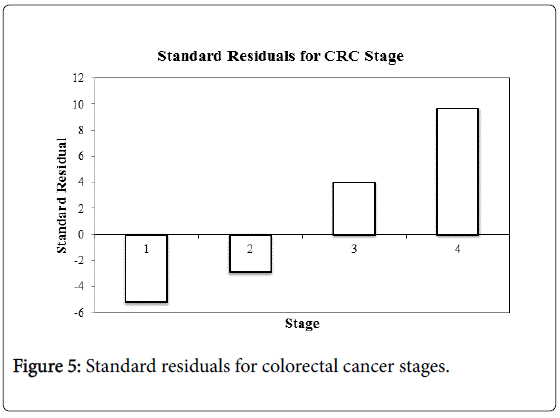 In this study, we showed that the incidence of colorectal cancer in patients younger than 50 increased from 11 per 100,000 in 1995 to 21.9 per 100,000 in 2010. This rise appears to be in concordance with other studies using other national databases. Using the SEER database, Davis et al. showed that the most significant increase in incidence of CRC was in the age group 40-44, with an increase from 10.7 per 100,000 in 1988 to 17.9 per 100,000 in 2006 [5]. Similarly, a studies have reported that early-onset CRC incidence rates increased from year 1998 to 2007 (annual percent change (APC): 2.1%; 95% CI: 1.1% - 3.1%), whereas late-onset incidence decreased (APC: -2.5%; 95% CI: 3.0% - 2.0%) [8-11]. We have also observed that early-onset CRC are more likely to be diagnosed at more advanced stages what is in agreement with one large-scale study reporting that patients with early-onset CRC are significantly more likely to present with stage III/IV disease compared to CRC patients with late-onset disease. For colon cancer, 63.4% of early-onset patients and 49.0% of late-onset patients were diagnosed with more advanced (stage III/IV) disease (p<0.01). 57.3% of earlyonset and 46.2% of late-onset colorectal cancer were diagnosed at later stages (p<0.01) [11,12]. We believe that later stage at the time of diagnosis is possibly related to the lower screening rates and/or failure to recognize and evaluate colonic symptoms in younger individuals, which is concerning because it likely leads to worse outcomes in this patient population. Similarly, another study by Edwards et al confirmed that young (age group 20-40) patients with colon cancer have a poorer overall survival compared with their 60-80 year old counterparts [11,12]. The underlying etiology of increase in CRC among younger patients remains an area of active research. The increase in awareness likely contributes to the increased incidence, as patients with asymptomatic rectal bleeding are more likely to receive a colonoscopy today than they were in the past; however, this is unlikely to be the only explanation contributing to the large increase in incidence that was seen in our study. We believe that early-onset CRC is multifactorial, as genetic mutations along with changes in lifestyle such as more sedentary lifestyle, increased obesity, and increased rates of diabetes are likely contributory [13-15]. Our study revealed a 76% increase in incidence of recto-sigmoid cancer, and because most of the early-onset CRC occur in the rectum, recto-sigmoid colon, and distal colon, sigmoidoscopy may be particularly useful in establishing or ruling out early-onset CRC. However, based on multiple studies, 30% of lesions in patients younger than 50 years of age can occur proximal to the splenic flexure and would be missed by sigmoidoscopy [7]. Although the cost effective data of early colonoscopy is limited, we recommend a reconsideration of current CRC screening colonoscopy guidelines; from age 50 to age 45. This is based on the increasing trends of early-onset disease, late stage presentation, and high incidence of CRC in patients age 45.

Results of this study should be interpreted in the context of its limitations. This study could not establish the mechanisms underlying observed socio-demographic disparities, nor did it explore the molecular basis of early-onset CRC (familial adenomatous polyposis was excluded). In addition, prognosis of early-onset CRC as well as the relationship based on racial differences is not discussed in this manuscript, although several previous studies have highlighted a significance of racial disparities in CRC incidence. Not with standing, this data call for increased investigation, awareness, and action against early-onset CRC. At a minimum, symptomatic young patients should undergo timely sigmoidoscopy, if not a full colonoscopy. Identifying high risk cohorts for targeted screening should be a priority.

Overall, there is a decreasing incidence of colorectal cancer in Arizona. However, an alarming increase in incidence of early-onset CRC was observed mirroring the national trend. In addition, a shift in mean age of diagnosis from 70.8 to 68.1 was seen. Rigorous screening and early detection have led to the overall decrease in the incidence of CRC, however many studies, including this one, have shown an alarming increase in the incidence of early-onset CRC. These trends are likely multifactorial and further studies are necessary to better elucidate the underlying social, environmental, and molecular mechanisms.