Journal of Dental Science and Medicine
Make the best use of Scientific Research and information from our 700+ peer reviewed, Open Access Journals that operates with the help of 50,000+ Editorial Board Members and esteemed reviewers and 1000+ Scientific associations in Medical, Clinical, Pharmaceutical, Engineering, Technology and Management Fields.
Meet Inspiring Speakers and Experts at our 3000+ Global Conferenceseries Events with over 600+ Conferences, 1200+ Symposiums and 1200+ Workshops on Medical, Pharma, Engineering, Science, Technology and Business

Copyright: © 2016 Güngör H. This is an open-access article distributed under the terms of the Creative Commons Attribution License, which permits unrestricted use, distribution, and reproduction in any medium, provided the original author and source are credited.

Purpose: The aim of this study was to evaluate the effect of crown-to-implant (C/I) ratio on the stress distributions in bone and implant under axial and oblique loads by using three-dimensional (3-D) finite element analysis (FEA) method in case of surgical procedures couldn’t be applied especially to the geriatric patients. Material and methods: Three maxillary bone models were created using with FEA methods. 4.1 x 10 mm ITI dental implants were embedded in first premolar site and one implant supported two-unit fixed dental prostheses were modeled. Shortened dental arch (SDA) concept was also modeled as a treatment option by means of implant supported fixed dental prosthesis. Three different (C/I) ratios (1/1, 1.5/1, and 2/1) were modeled in this study with a 6 mm cantilever extension. 300 N axial and oblique loads were applied to the all fixed dental prosthesis. The highest stress values were recorded and evaluated both in bone and implant. Results: The determined highest stress in cortical bone was -73.6 MPa under axial loads and -142.4 MPa under oblique loads for 2/1 C/I ratios. The highest von Mises stress value in implant was 312.7 MPa under axial load and 451.1 MPa under oblique load for the highest C/I ratio. With the increasing C/I ratio, stresses were increased both in bone and implant structure. Conclusion: Within the limitations of this FEA study, increasing C/I ratio increases the stress distribution in bone and implant. One implant supported two-unit cantilever fixed dental prosthesis may be one of the alternative treatment choices for the geriatric patients but this FEA study should be supported with the clinical studies.

Dental implants have been accepted as a successful treatment procedure for partially and totally edentulous jaws [1]. However, bone density and anatomic structures (maxillary sinus etc.) must be considered carefully when the edentulous region is located in the posterior maxilla [2]. Adequate and ideal bone volume for correct positioning of implants can be created in the posterior maxilla by bone augmentation or sinus floor elevation [3]. However, these surgical procedures are associated with increased rate of complications and healing time, especially in older patients. Moreover, surgical procedures may not be the best option for every patient [4], and toothor implant-supported cantilever fixed dental prostheses (FDP) may be an alternative when augmentation procedures are not possible [5]. When premolar or molar teeth are missing in the posterior maxilla, the first premolar site is suggested as the ideal location for implant insertion because of sinus pneumatization [2]. The shortened dental arch (SDA) concept can be applied using one implant-supported distal cantilever FDP. According to this concept, bilateral occlusal support extending to the second premolar preserves oral function and prevents temporomandibular joint disorders. The age of the patient and lack of parafunctional habits are the most important factors while applying SDA concept [6]. After extraction of posterior teeth and alveolar bone resorption at the posterior maxilla, increased crown length is inevitable and may create excessive stress at the bone–implant interface [7]. Prosthetic complications may occur in implant-supported FDP because of excessive stress [8].

Although determining the maximum stresses at the bone–implant interface and within the implant structure itself is difficult, it is very important for implant-supported cantilever FDPs with different crown-to-implant ratios. Estimation of the stress occurring in living tissue using a three-dimensional (3-D) modeling system will increase the clinical success of dental materials [8]. Using the 3-D finite element analysis (FEA) method, live tissues can be mimicked and the areas of stress concentration and magnitude of stress can be evaluated [9]. This study aimed to evaluate the stress concentration at the bone–implant interface and implant structure of one implant-supported distal cantilever FDPs with different crown-to-implant ratios when exposed to axial and oblique loads.

Three 3-D FEA models were created using the computer program Rhinoceros 4.0 (Rhinoceros 4.0, McNeel, Seattle, WA, USA) and an analysis program (Algor Fempro, Algor, Inc., Pittsburgh, PA). The missing maxillary molar and second premolar and pneumatized maxillary sinus were modelled using this method, and the first premolar site was identified as the ideal location for implant insertion. Thereafter, a 4.1 × 10-mm solid dental implant (ITI; Institute Straumann AG, Waldenburg, Switzerland) was selected and modeled, along with one implant-supported two-unit cantilever FDPs with three different C/I ratios (1/1, 1.5/1, and 2/1). The distal cantilever length was 6 mm for each model, and D3 bone density was used to simulate the maxillary bone [10]. The Young’s modulus and Poisson’s ratios are shown in Table 1 [11]. Cobalt-Chromium (Wiron 99; Bego, Bremen, Germany) and feld spathic porcelain was used to model the FDPs and 100% osseo-integration was assumed to occur at the bone–implant interface [12]. The numbers of elements were 225576, 210988, and 20093, and the numbers of nodes were 45588, 43036, and 41293. In this study, the porcelain thickness was 2 mm, metal thickness was 0.8 mm, and the cement layer thickness was not considered [11]. All materials used in this study were assumed to be homogeneous, isotropic, and linear elastic [10]. 300 N axial and oblique loads (45 degrees) were applied to the implant-supported FDP [13]; the von Mises and minimum and maximum principal stresses were evaluated to assess the stress concentration in the models.

Fixed and removable dental prostheses, resin-bonded FDPs, and implant-supported prostheses are the most common treatment options for partially edentulous patients. In cases where the edentulous site occurs in the posterior maxilla, implant-supported FDPs have been considered as the treatment of choice [14]. However, the anatomical structures of the posterior region of the jaws, such as maxillary sinus and mandibular canal, and bone density must be taken into consideration during dental implant procedures. In case of maxillary sinus pneumatization, sinus lift and grafting procedures may be performed [15].

The aim of this study was to evaluate the stress concentration of one implant-supported distal cantilever FDPs with three different C/I ratio placed in the first premolar site of the maxillary jaw model using the FEA method. The FEA is a mathematical and reliable tool that can be used to accurately measure the stress at the bone–implant interface and within the implant structure itself. Both two-dimensional and 3-D FEA can be used, although 3-D FEA provides more realistic and reliable results. The stress pattern in bone is evaluated using maximum and minimum principal stress values, whereas the stress pattern in dental implants is evaluated using von Mises stress values [16]. In the FEA method, absolute values are used to determine stress variations, and higher value has been considered for the study result [17]. Axial and oblique loadings were used to mimic real occlusion [18], and a 300-N load was chosen for all models in this study based on the literature [19].

Dental implant-supported FDPs are one of the most common treatment options for posterior edentulism in older patients. However, it may not always be possible to insert an adequate number of implants because of anatomical limitations in the posterior maxilla, such as the maxillary sinus. In these situations, the SDA concept suggested by Kayser may be preferred as an alternative. According to this concept, the presence of bilateral second premolar teeth can help to preserve oral functions and prevent temporomandibular joint dysfunction [6]. This concept can also be applied with a cantilever FDP when the second premolar teeth are absent. Excessive maxillo–mandibular disorders, open bite, or parafunctional habits are contraindications for the SDA concept. Moreover, this concept is also unsuitable in young patients [20].

In this study, ITI implants were inserted in the first premolar site because of the presence of a pneumatized maxillary sinus, and oneimplant- supported two-unit distal cantilever FDPs were modeled by applying the FEA method to the SDA concept. Sasse et al. compared the tooth-supported cantilever group and non-cantilever group in SDA and reported that cantilever FDPs could be used successfully for patients with SDA [20]. An increased crown length is inevitable after tooth extraction in the posterior maxilla because of the rapid alveolar bone resorption pattern seen in this region [2]. This may lead to excessive non-axial loading, resulting in technical complications. The increased crown height functions as a lever arm and causes excessive stresses in the peri-implant crestal bone, leading to bone resorption and prosthetic complications [21]. Although there are different C/I ratios in literature, C/I ratio can be 2/1 or more [14,21]. Blanes et al. in their systematic review suggested that C/I ratios had no effect on crestal bone loss and implant failure and that there was insufficient evidence of technical complications in implant-supported prostheses [21]. A ten-year prospective study reported that C/I ratio ranged between 2 and 3 in the posterior region of the jaws [14]. Conversely, other studies have reported that the C/I ratio may cause mechanical and technical complications as well as alveolar bone loss [22].

According to our results, the increased C/I ratio affected the stress concentration in cortical and cancellous bone as well as the implant under axial and oblique loads. The stress was seen to increase under oblique loads to a greater extent than that under axial loads (Figures 1 and 2). Minimum principal stresses were considered for cortical bone because of their high absolute values. Moreover, oblique loads were found to be more significant than axial loads and, therefore, they must be considered carefully when planning implant-supported cantilever dental prostheses. 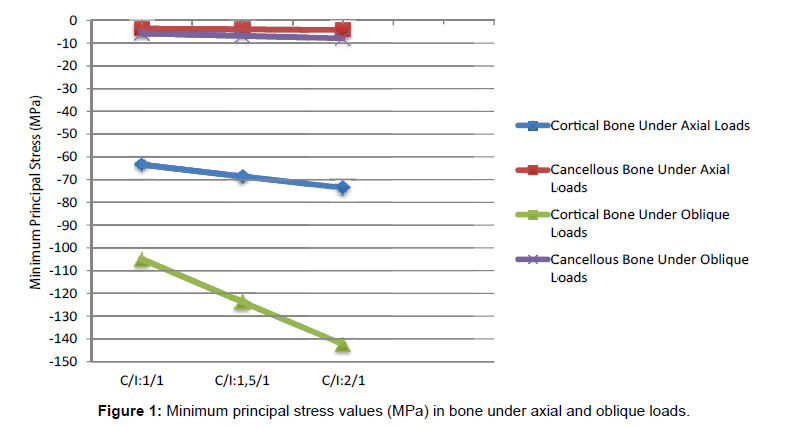 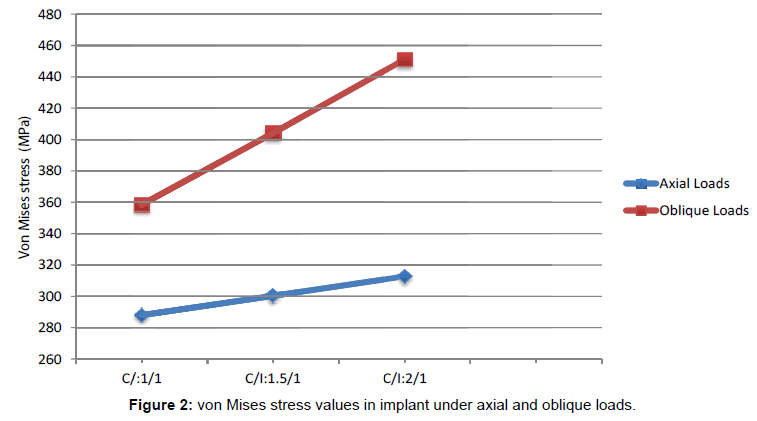 Within the limitations of this 3-D FEA study, the effects of C/I ratio on one implant-supported distal cantilever FDPs was evaluated using the SDA concept, and the following conclusions were drawn:

• Increasing the C/I ratios of distal cantilever FDP increases the maximum stress values in cortical and cancellous bone and implants.

• Changes in stress values because of increased C/I ratios were more significant under oblique loads.

One implant-supported two-unit distal cantilever FDPs may be an alternative treatment option for older patients. However, this FEA study should be supported by future clinical studies.

The authors thank to Merve Arslan for her help preparing this manuscript and this study was supported by the Scientific Research Project Fund of Kirikkale University under the project number 2014/08.