Soil acidity is one of the major soil chemical constraints which limit agricultural productivity in the mid and highlands of Ethiopia. Especially in the western part of the country such as Assosa and Wellega, soil acidity is a well-known problem limiting crop productivity. The study was conducted to evaluate the influence of lime and Phosphorus fertilizer on yield and yield attributes of soybean in acid soil at Assosa north western Ethiopia during June 2012 to March of 2015. The crop was evaluated in terms of pod per plant, seed per pod, grain yield, hundred seed weight and straw yield. But it had neither interaction with lime and Phosphorus fertilizer nor its effect on yield attribute was significant. Even though lime level at 1.5* Exchangeable acidity (5.652 tone) and phosphorus at 46% shows good yield and had consistency across the year, hence it was best to use such combination of Lime and P. Maintaining soil fertility is possible for the area because simultaneous and minimum use of lime and Phosphorus fertilizer give similar seed yield with maximum use of lime and Phosphorus on the study area though much better than the control. Phosphorus fixation, which is responsible for low availability of P, is one of the major problems of crop growth in acidic soils such Nitisols of Assosa area.

Soybean (Glycine max L.) is one of grain legumes that is grown in tropical, subtropical and temperate climates. Globally, soybean production has increased by a factor of eight in the last half century to reach its present level, about 100 million metric tons per year [1]. Consideration of the economic advantages of soybeans has led many countries to start large scale production of this crop. Soybean is an important source of inexpensive and high quality protein and oil. With an average protein content of 40% and oil content of 20%, soybean has the highest protein content of all food crops and it is the second to groundnut in terms of oil content among food legumes crops [2].

Soybean is one of the most important feed stuffs for livestock either in form of forage (as hay and silage) or soybean meal [3]. Because of its high quality protein content, soybean can also compensate the expensive animal proteins to overcome malnutrition. Since its oil content is high (20% and above), soybean is also used for edible oil production in Ethiopia. In Ethiopia, particularly in the capital city, Addis Ababa, Faffa food Share Company, East African Flour Factory, and Health care food manufacturing private limited companies etc are using local and imported soybeans in the preparation of enriched food products for children and adults [4]. Soybean is known for its wide adaptability coupled with its higher productivity per unit area compared to other grain legumes [5]. However, it has long been recognized that soil acidity is one of the most serious challenges to agricultural production worldwide in general [6] and Ethiopia in particular. All over the world, poor growth and low productivity of soybean has been mainly attributed to soil acidity among other factors [7].

Soil acidity is one of the most important soil factors which affect plant growth and ultimately limit crop production and profitability [8] and its problems are common in all regions where precipitation is high enough to leach appreciable amounts of exchangeable bases from the soil surface [9]. Soil acidity is one of the most prevalent problems in the production of food and fiber because about 40% of the world’s arable land is affected by this problem [10]. The amount of readily available phosphorus (P) in the soil is very low compared with the total amount of P. In soil fertility, P fixation is the process in which easily soluble fertilizer phosphates are transformed into such insoluble forms that their uptake by plants is hindered [11]. Soil acidity mainly at soil pH<5.5 affects the growth of crops due to high concentration of aluminum (Al) and manganese (Mn), and deficiency of P, nitrogen (N), sulfur (S) and other nutrients [12].

Although P is known as the master key to agriculture, lack of available P in the soil limits the growth of both cultivated and uncultivated plants [13]. Tropical and subtropical soils are predominantly acidic with high P fixation capacities and often are extremely P deficient. In acidic soils there are very high contents of iron (Fe) and Al bonded P fractions compared to the other fractions which could be due to the high content of Fe/Al-oxides, low pH and advanced stage of weathering of the soils that control the plant available P, and the high content of Al and Fe oxides and hydroxides are the main factors for the strong P fixation in acidic soils [14]. Most soils of the highlands are characterized by soil acidity and high P fixation due to intensive weathering and leaching attributed to high rainfall. In the past, soil acidification affected large areas of Ethiopian highlands and this situation now has the potential to worsen in the country.

Soil acidity is becoming a serious threat to crop production mainly in the areas of the western, southern and central highlands of Ethiopia [15]. This low availability of P under most soils of Ethiopia is due to the impacts of P fixation by acidic cations, abundant loss of P by crop harvest and erosion and the inherent P deficiency of the soils by little or no P sourced fertilizers application [14].

Therefore, soil P deficiency is mainly due to low organic matter (OM) content, low P fertilizer application, P loss by soil erosion, and P fixation by Al, Mn and Fe, miss management of soil and the like. However, application of P sourced fertilizers and lime rate is does not optimized for Assosa area (Figure 1). Therefore, this activity was designed to evaluate the Influence of lime rate and P fertilizer on the change of acid properties of the soil and soybean growth at Assosa soils. 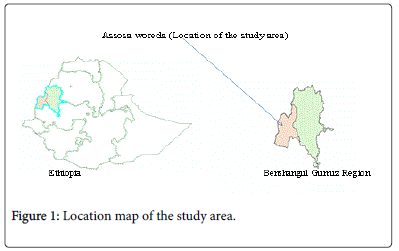 This experiment was conducted at Assosa Zone, Megele-33 kebele of Northwestern Ethiopia in the main rainy season of 2012 to 2015.The research sites are found in the altitude ranging between 1300-1470 m.a.s.l. with the minimum and maximum temperatures of 14.38 and 28.55°C, respectively and an average annual rainfall of 1291.15 mm of which 1041.65 mm were received between May and October during the cropping season (Table 1).

Factorial experiment was laid out in randomised complete block design (RCBD) with five levels of lime (0 X EA, 0.5 X EA., 1 X EA., 1.5 X EA. and 2 X EA., or 0, 1.875, 3.75, 5.652 and 7.5 t ha-1) and four levels of P (0, 23, 46 and 69 kg ha-1) applications replicated three times during the 2012-2015 growing season around Assosa at Megele 33 kebele. The site’s exchangeable acidity was 2.36 which were above the critical level. The amount of lime is determined by the basis of the mass of soil per 20 cm hectare-furrow-slice soil sample density, and exchangeable Al+3 and H+ as described in Eq. 1 below. Assuming that one mole of exchangeable acidity is neutralized by equivalent mole of CaCO3. The full dose of lime was applied at once in the first year according to the rate. The recommended rate of N was applied uniformly to all treatments. Lime was broadcasted uniformly by hand and incorporated into the soil a month before planting. Urea and triple super phosphate was used as the source of N and P, respectively. Application of urea was in two split, while the entire rate of phosphorus was applied at sowing in band. The plots were kept permanent for the duration of the experiments to observe the carryover effects of the lime.

Initially on composite soil sample from the experimental site was collected before lime application and subjected to analyses of soil acidity attributes and other soil physic-chemical properties. Samples were randomly collected from surface layer of the experimental field (i.e. 0-20 cm soil depth) to form composite and analyzed for the soil pH and for the parameters to be found in the Table 2.

The soil analysis result of available P taken after harvesting of experimental sites was affected by the applied lime for the soybean as shown in the table below. The data were analyzed across experimental years and their interaction effect. Among the applied lime rates, the highest available P was observed at the rate of lime 1.5 X EA. (3.75 CaCO3 t/ha) with values of 3.49 meq/kg of soil. The observed increment in available P was probably related to the decrease in reactive Al+3 and also to an increase in surface negative charge resulting from the increased soil pH [18]. The soil available P at sites was lower in the control treatment when compared to all levels of lime additions. However, no significant (P<0.05) differences were observed among applied lime treatments.

Table 6: Interaction Effect of lime and P rate on grain yield of soybean.

Soil chemical properties such as pH, base saturation and Ca and Mg contents were increased, which may be responsible for higher soybean yields. The results of the effects of agricultural limes on soil showed that all plots receiving lime recorded an increase in soil pH. However, lime rate of 1.5*E.A t ha-1 of agricultural limes had increased the soil pH by 5.76. Exchangeable Al was also affected by the applied lime rates. On the other hand, from the P rates of 46 kg ha-1 had gives a higher soybean grain yield. Significant increases in mean values of available P were obtained at the 1.5*EA. (5.652 CaCO3 t ha-1) amended plots. These lime treatment that increased soil pH to 5.76 also showed in increments of plant height, head weight, grain yield of sorghum and some other chemical properties of the soil. Regarding to lime by P interaction, good mean yield of soybean was obtained by interaction effect of 46 kg ha-1 phosphorous and at 1.5*E.A level of lime gives the highest (925.755 kg ha-1) grain yield of soybean. Hence a combined application of phosphorous level at 46 kg/ha and lime at 1.5*E.A had good response in reclaiming the soil and in increasing crop productivity.

Furthermore the soil chemical and physical improvement is not that much adequate and the soybean yield obtained is not as high as the yield potential of the variety. These may be due the occurrence of sub soil acidity which should need an attention in the future.

Copyright: © 2017 Tamene D, et al. This is an open-access article distributed under the terms of the Creative Commons Attribution License, which permits unrestricted use, distribution, and reproduction in any medium, provided the original author and source are credited.