Suitable carbon source and an ideal media type are essential pre-requisites for rice tissue culture and transformation experiments. Maltose is found to be the best carbon source and MS media is found to be the ideal media type for the results obtained from callus induction and regeneration capabilities of seven indica rice genotypes taken under study. Varied tissue culture response of selected genotypes is found conspicuous at different sugar concentrations.

Indica rice varieties are known to be recalcitrant to culture and several attempts are made throughout the years to improve tissue culture protocols for effective callus induction and regeneration- in vitro [1-3]. Several factors of the culture media play a critical role in tissue culture response of the various rice genotypes. Types of the media used, and carbon sources are two vital factors among them. Moreover, genotypic differences do exist in response to the culture media [4-7]. In this study attempts were made to find the suitable media for rice tissue culture between the two widely used media viz ., MS and N6. Response of the cultivars towards varied carbon sources and concentrations is studied. Browning of callus in long standing rice tissue cultures is one of the major concerns which hamper the regeneration capacities of the rice cultivars [8,9]. This is observed in rice cultures grown on sucrose, compared to maltose. This study envisaged to find out the ideal concentrations of sucrose and maltose to be used for ideal green plant regeneration. This study holds importance because the choice of best responding variety to suitable sugar concentration in an amenable media is an essential pre-requisite for gene transformation experiments and efficient regeneration of the successful transformants. Results obtained were tabulated and the consequences are discussed.

The rice genotypes selected for the study were elite indica rice cultivars Swarna, Gayatri, Samba Mahsuri, Pooja, Tapaswini, Sahabhagidhan and Anjali. Swarna, a widely grown variety in eleven states of India, is highly popular with a yield potential of 8.0 t/ha [10]. It is also being widely grown in Bangladesh and Myanmar suggesting its wide adaptability [11]. Gayatri, a high yielding cultivar released from NRRI, is widely grown in shallow and medium low land ecology in Eastern India. Samba Mahsuri (BPT 5204) is one of the India’s most popular and highly prized rice varieties because of its high yield and excellent cooking quality [12].

Pooja, a high yielding cultivar released from NRRI, is widely grown in shallow and medium low land ecology in Eastern India [13]. Shabhagidhan is a popular variety suitable for upland, rainfed direct seeded as well as transplanted conditions. It is released for cultivation in states of Jharkhand and Odisha. It bears golden husked long bold grains and has an average productivity of 3.8-4.5 t/ha [14]. Tapaswini is an elite indica rice variety with a yield potential of 5.0 t/ha [15,16]. Anjali is an upland early maturing rice variety released from NRRI [17]. Characteristic features of seven different genotypes taken in study are given in Table 1 [18].

This experiment was conducted with an objective of identifying suitable medium for raising the somatic cell cultures in indica rice so that the identified medium can be effectively used for rice tissue culture and transformation purposes. The genotypes showed varied response on both the media with respect to callus induction (Table 2).

MS medium, in general, proved to be better for early callus induction and calli induced on this medium showed good levels of green plant regeneration in all the genotypes tested compared to N6 medium (Figure 1). 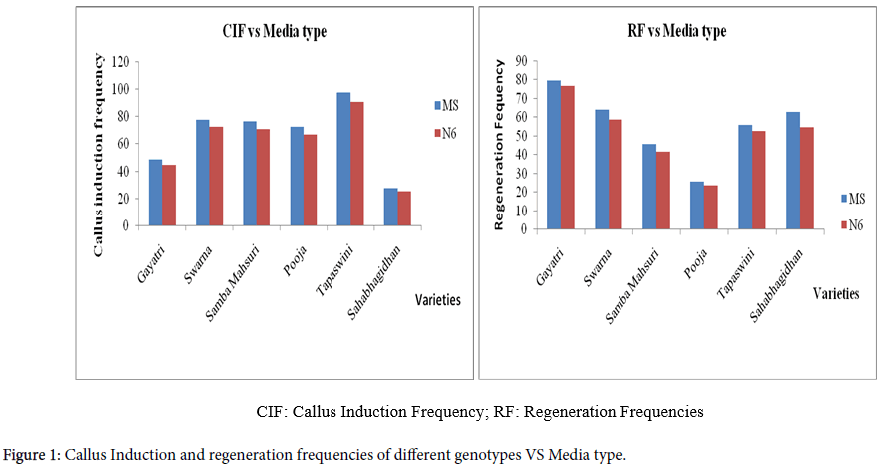 Even though, compositions of the both the media are distinctive, ratio of nitrogen between nitrate form and ammonium form during plant utilization in the media was found to play a critical role in somatic embryogenesis of monocots [22,23] and the results showed that rice genotypes responded better on MS medium compared to N6 medium.

Most desirable strategy to obtain better regenerati on is to use the most appropriate medium [24]. MS medium is the best suitable medium as per the results obtained. The analysis of variance conducted with the six varieties suggests that the differences between media, genotypes and interaction were significant for both callus induction and green plant regeneration. (Table 3).

Table 3: Analysis of variance on the media type for in vitro response.

Effect of carbon sources on callus induction and plant regeneration

This experiment was conducted with the objective of identifying the ideal carbon source for rice tissue culture which can be employed later for transformation purposes. Two sugars i.e., sucrose and maltose were tested at four different levels as the carbon sources in the MS callus induction medium and the responses of six genotypes, Gayatri, Swarna, Samba Mahsuri, Pooja, Anjali, and Sahabhagidhan were studied.

Genotypic differences were observed for both callus induction (Figures 2 and 3) and regeneration (Table 4) in response to different concentrations of sucrose and maltose in the callus induction medium.

Table 4: Effect of sugars on in vitro response in different indica rice varieties. 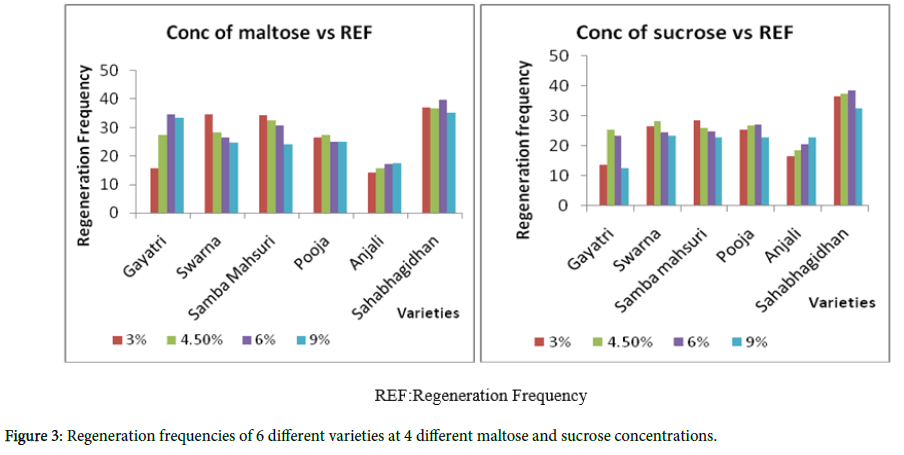 Addition of higher levels (>6%) of sucrose to the callus induction media did not show any significant enhancement of callus induction when the pooled data of all the six genotypes was taken into consideration.

The analysis of variance of the data suggests that the differences between various concentrations of sucrose and maltose and genotypes were significant for both callus induction, and green plant regeneration (Table 5).

Table 5: Anova on response of genotypes to different levels of sugars.

This can be attributed to the reduced rate of hydrolysis of the maltose to glucose and glucose-1-phosphate [25-27] thereby providing a readily metabolized carbon source over a long period in culture and improvement of osmotic stability of the culture medium in comparison to sucrose [28]. This is in congruence with earlier research works of Kumria et al. [29], Zaidi et al. [5] and Bagheri et al. [30].

There was significant influence regarding the level of sucrose or maltose in the callusing media [31] and also on the regeneration potential of the calli depending on the genotypes (Table 4). However, browning of the callus is observed due to the ethylene produced under the influence of sucrose on regeneration of calli. This is in congruence with the research studies of Hidekazu Kobayashi and Hitoshi Saka [32]. This is one of the reasons why maltose is preferred over sucrose [33].

Ideal carbon source and an amenable media are essential prerequisites for best tissue culture response of selected indica rice genotypes. The results of this study showed that MS media and maltose are best sources for tissue culture response. However, variation in concentrations of the sugar source is to be judged in response to type of genotype chosen. This study holds importance in improvement of protocols for rice tissue culture and future transformation experiments for crop improvement.

Copyright: © 2019 Repalli SK, et al. This is an open-access article distributed under the terms of the Creative Commons Attribution License, which permits unrestricted use, distribution, and reproduction in any medium, provided the original author and source are credited.