1Research Center of Obstetrics, Gynecology, and Perinatology, Ministry of Health of Russia, Russia

Copyright: © 2017 Donnikov AE et al. This is an open-access article distributed under the terms of the Creative Commons Attribution License, which permits unrestricted use, distribution and reproduction in any medium, provided the original author and source are credited.

Retrochorial hematoma (RCH)-is a hemorrhage due to detachment of the chorion surrounding the embryo from the endometrium [1]. RCH is one of the most frequent complications of the first trimester of pregnancy [2].

The current approach to the prevention and treatment of the above mentioned gestational complications is a symptomatic treatment, due to insufficient knowledge of the RCH pathogenesis. However, new trends of medical genetics, in particular - genomics, that is developing rapidly and engaged in studies of genome structure, the identification of genes, studies of mutations and polymorphisms, offer opportunities for primary, presymptomatic diagnosis of hereditary predisposition to the disease and, consequently, for its early prevention [8].

The polymorphisms of factor V Leiden (F5 G1691A), prothrombin gene (F2 G20210A), protein C and protein S deficiency, polymorphisms of methylenetetrahydrofolate reductase (MTHFR) and antithrombin III deficiency [9] are the most studied. However, involvement of other genetic factors in the pathogenesis of RCH is also of great interest.

All the pregnant women previously gave informed consent to carrying out this research.

The ultrasound examination was performed on the Philips HD 11 ultrasound device. Coccyx-parietal size, heart rate, yolk sac, its medium-internal diameter, chorion localization and its structure, structural features of the uterus and ovaries were evaluated; we precisely evaluated the size and the volume of RCH, its localization and stage of development. Localization of RCH was classified as corporeal (located in the bottom of the uterus) and supracervical (over internal os). The volume of RCH in pregnant women, whom molecular genetic genotyping was performed, varied from 0.022 to 4.86 cm3, median -0.29 cm3, interquartile range (25-75 percentile) -0.05-1.09 cm3.

Tests for compliance with the Hardy-Weinberg’s equilibrium (with p>0,05 balance is carried out) and the identification of the associations between the occurrence of detachment of chorion and genotype were performed with the help of χ2 test (Pearson criteria or Fisher criteria). Differences were considered statistically significant at the achieved level of significance p<0.05.

Based on the study of hemostasis system genes polymorphisms, we have developed a mathematical model to assess the risk of RCH development. The analysis included all the studied genetic markers except the least significant. At the final stage of the analysis there were only two variables: the number of rare alleles in the patient's genotype at polymorphic loci G10976A of F7 gene and G103T of F13 gene. The part of dispersion explainable with this model is 36.9% (calculated with the help of Nadelkerkes’ method). The regression equation was:

where z: is a classifying discriminant function, 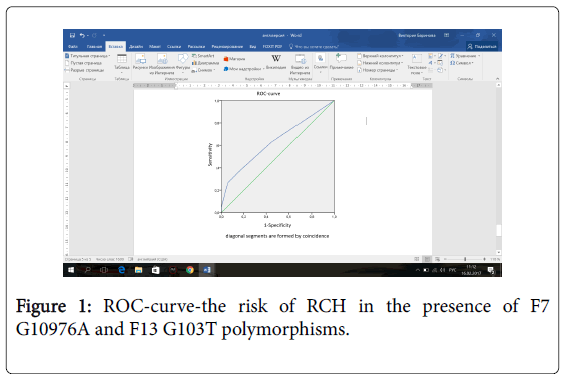 To calculate the probability of RCH development on the basis of the proposed model the following regression equation (logit transformation) can be used:

Where, P: is the probability of belonging to a particular class with the resulting value of the function z

E: the base of natural logarithms

Since the logit transform solves the problem of restrictions on the values for the original dependent variable (probability), then these converted values can be used in a conventional linear regression equation. Based on the fact that the value of the function is the probability that the initial value belongs to a particular class, if the pvalue less than 0.5, then it is judged that the event is not likely to occur; otherwise the event is expected to occur.

The hypocoagulation changes of plasma hemostasis, mainly due to changes in the external pathway of blood coagulation, occur in the development of chorionic detachment. We detected an increase in prothrombin time (PT) and international normalized ratio (INR) (Table 2).

Table 2: Indicators of hemostasis in pregnant women with RCH and in women of the control group in terms of 6-11.6 weeks (Note: The comparison of the groups was performed by using the Mann-Whitney test, r?0,05 *, ** p<0.01).

In our research, we have studied polymorphisms of folate cycle genes and hemostatic system genes and also have assessed the state of plasma hemostasis in pregnant women with RCH.

The effect of the polymorphism F13 G103T (Val34Leu) on the state of blood coagulation system, and its ability to cause hemorrhages, can be explained by the fact that the decrease of the active subunit A of the F13 factor due to the mutation leads to the formation of less stable thrombi, that increases the bleeding risk [14]. We have not met any data on the role of F13 polymorphism G103T in the genesis of bleeding in the first trimester of pregnancy.

Thus, the results of our study suggest that the presence of polymorphic loci of proconvertin genes F7 G10976A and fibrin stabilizing factor F13 G103T, is a hereditary risk factor for bleeding in pregnant women, since the polymorphic variants of these genes affect the systemic hemostasis leading to hypocoagulation state, prolonging the time of formation of prothrombinase (proconvertin polymorphism) and forming less stable thrombi (fibrinase polymorphism). Hypocoagulation by external mechanism was confirmed in our study by the changes in the coagulogram in pregnant women with RCH. Speaking about the hereditary predisposition to bleeding, of course, one should take into account the bleeding of mucous membranes, bleeding during operations and the duration of bleeding in physiological processes, for example, the duration of menstruation. Bleeding of the examined patients with RCH can be considered as a manifestation of the systemic effect at the local level (at the level of the uterine-chorial region).

According to the results of this research, we can state that the presence of rare alleles of polymorphic loci of the genes proconvertin (F7) and fibrin stabilizing factor (F13) in the homozygous state is the most unfavorable combination for the development of RCH in pregnant women. Since these genotypes are associated with a predisposition to hypocoagulation, there is reason to claim that a genetically determined tendency to bleeding is a significant risk factor for the development of RCH.

These combinations of hemostasis system genes polymorphisms (G10976A of the F7 gene and G103T of the F13 gene), in the presence of which, pregnant women are at increased risk of RCH developing, should be considered as an important finding.