Copyright: © 2017 Sharma M, et al. This is an open-access article distributed under the terms of the Creative Commons Attribution License, which permits unrestricted use, distribution, and reproduction in any medium, provided the original author and source are credited.

Class 6: Resection of the anterior portion without reconstruction.

Unhelpful limiting factors like improper orientation of resected mandible, leading to deviation of the mandible to the resected side and limiting coordination, facial asymmetry, muscular imbalance. It also leads to other problems such as phonetics, mastication and mandibular movements [3].

Different treatment options are available for the prosthetic rehabilitations such as use of palatal ramp and guiding flange [4]. Rosenthal advocated use of anatomic teeth double rows on the undefective side. Different treatment approaches uses two rows of anatomic teeth: one in an occlusal position and the other supporting the cheeks and other muscles [5-6]. Earlier articial temporomandibular prosthesis is being used but now this technique is outdated [7]. Mandibular guidance therapy was also used where the rotation is major and few abutments were present, improving mastication, aesthetics and phonetics. However, this therapy is only useful for those patients for whom the resection involves minimal bone loss and associated structures [8]. In this paper prosthodontics’ rehabilitation of a hemimandibulectomy patient with twin occlusal therapy on the unresected side was described.

A 68-year-old male patient reported to the department of dentistry Veer Chandra Singh Garhwali Government Medical College, Srinagar Garhwal, Uttarakhand, India with the chief complaint of having masticatory difficulty, poor esthetics and phonetics. Extra oral examination reveals facial asymmetry with loss of muscle mass on resected side. The patient gave a history of cigarette smoking since 25 years and was alcohol abuser since 18 years. He was diagnosed for squamous cell carcinoma of the left buccal mucosa about 5 years back. Medical history revealed that he had undergone an extensive commando resection of the mandible about 5 years back (Figure 1). Periodontally compromised teeth i.e., mandibular central and lateral incisor on the resected side were extracted. There was deviation of the mandible on the resected side (Figure 2). A PA mandible X-ray revealed resection of the mandible distal to lateral incisor on the left side up to condyle on left side (Figure 3). Due to economic constraint grafts and implant placement on the defect side was not possible therefore prosthetic rehabilitation of hemimandibulectomy with twin occlusion was planned. 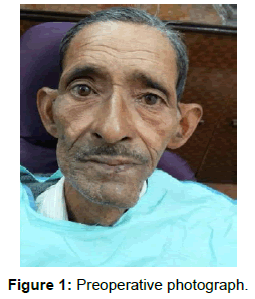 Figure 3: Resected mandible on left side.

Before any prosthetic treatment could begin, the patient was asked to follow an exercise regime. It comprised of placing the right thumb inside the corner of the mouth on the left side and to stretch the cheek laterally for three sets of five stretches at least twice a day.

The primary impressions were made with alginate for the maxillary arch and mandibular arch on stock plastic tray (Figure 4). Special tray was constructed on maxillary arch. Custom trays were fabricated with care taken to block the present teeth in mandibular arch. Border moulding was done and final impression were made with zincoxide eugenol paste in maxillary arch. In the mandibular arch after border moulding and final impression of mandibular arch with ZOE paste. Medium body was utilised to record resected tissue and then a plastic tray was used to record present teeth and definitive casts were obtained (Figure 5). Vertical dimension was assessed by closest speaking space method. Centric relation record was recorded. Twin occlusion using anatomic teeth were arranged on the healthy mandibular side. Teeth were occlusaly grinded for removing interfences in lateral direction (Figure 6). Try in was checked for esthetics, phonetics, lack of cuspal interference and occlusion. The dentures were processed and checked intraorally (Figures 7 and 8). Any interferences were corrected and patient was given instructions. Patient was heavily motivated and ask to make repetitive efforts so as to adapt to new dentures. Different exercises were suggested to the patient so that he can adapt the mandibular denture into centric occlusion. Patient was recalled after one week and patient expressed satisfaction in esthetics, phonetics and masticatory efficiency (Figures 9 and 10). 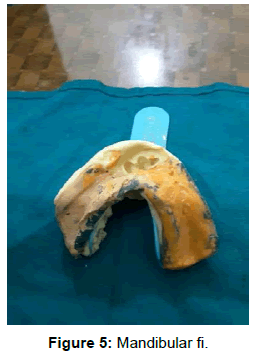 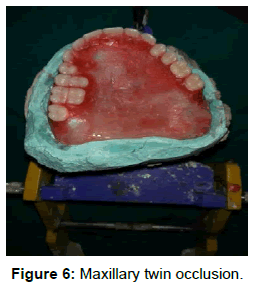 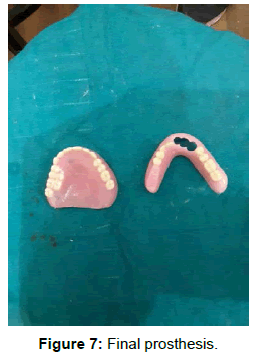 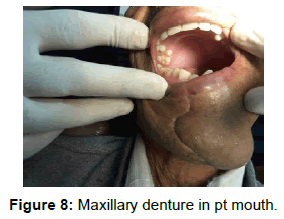 There were several physical limitations seen in hemindibulectomy edentulous patients like surgical skin grafts, deviated mandible, and unfavourable ridges. The present article explains successful management of hemimandibulectomy patient. Twin occlusal technique not only improves masticatory ability but also supports cheeks thereby improving aesthetics and phonetics [5-7]. This eliminates lateral stress that would destabilize mandibular denture. Implants also serve as another option in resected mandible but it is costly and technique sensitive [9]. The Guide Flange Prosthesis can be regarded as a training type of prosthesis. If the patient can successfully repeat the mediolateral position, the GFP can often be discontinued [10-13]. Another technique by Rathee et al., described a simple method for fabrication of customized wire-made-guide flange removable prosthesis to aid in the reducing the mandibular deviation and enhances the masticatory efficiency. Low weight prosthesis with low-cost is conservative rehabilitation prosthesis for hemimandibulectomy patients [8,11].

Patient motivation and education was the basic principle for successful rehabilitation of any prosthetic treatment. In this article author incorporates two rows of anatomic posterior teeth in maxillary denture to impart stability and broader occlusal table. Though surgical reconstructions by grafts and implants were not possible in every patient because of economic constraints, alternative prosthodontics rehabilitation has to be considered to restore aesthetics and mastication in hemimandibulectomy subjects.