The banana weevil Cosmopolites sordidus (Germar) is the most important insect pest of banana and plantain (Musa spp.). The larvae by its trophic activities bore into the corm, present roots are destroyed and the emergence of new roots is delayed, reducing nutrient uptake and weakening the stability of the plant. Attacks in newly planted banana stands can lead to crop failure. In established fields, weevil damage can result in reduced bunch weights, mat die-out and shortened stand life. Damage and yields losses tend to increase with time. Banana weevil has been implicated as a primary factor contributing to the decline and disappearance of East African highland cooking banana from its traditional growing areas in central Uganda. Control measures are essentially based on the use of chemicals. Adult resistance, environnemental pollution, most toxicity to famers also to consumers, and its effect on non target insect were negative side effects of chemicals. Alternative sustainable methods (use of parasitoïds, predators, mass trapping with or without pheromon) were experimented, but results were few interest. Biological control using entomopathogenic fungi within genera Metarhizium and Beauveria bassiana were performed. Although promise results are shown in preliminary studies, efficient delivery systems still need to be developed. Research protocols for the development of a microbial control program of banana weevil using Metarhizium has focused in Côte d’Ivoire since 2008. It based on inoculated disk on stump traps (culombia trap), pheromon traps, pseudostem traps including its gregariousness to disseminate inoculum among weevils for sanitation of established field and biorationals. So these methods appear to be the promise ones significantly least fastidious and economic.

The banana weevil Cosmopolites sordidus (Germar) is the most important insect pest of bananas and plantains (Musa spp.). Yields losses up to 100% in cases of severe infestation. The control is based on farming practices including the use of healthy planting material, systematic adult trapping, the removal of crop residues and especially the use of chemicals. Chemicals resistance [1], the elimination of useful non-target fauna and the accumulation of pesticide residues are the unmanageable consequences of chemical control. The use of resistant or tolerant plant [2] is an attractive alternative. However entomopathogenic fungi is more interesting because of its environmental aspects. Isolates belonging two genera Beauveriaand Metarhizium were experienced in the banana producing countries. Mortality rates in the laboratory reach 100% [1].

In Côte d’ Ivoire, 11 high pathogenic isolates of Metarhizium from mycosed weevils were collected in banana plantations. Pathogenicities tests performed in laboratory showed TL50 ranging from 6 to 10 days and TL90 6 to 40 days [3]. In order to confirm the performances and create optimal application conditions, an isolate was therefore tested in different planting methods of application in the traps commonly used by farmers particularly to control the banana weevil. This paper reviews the research activities since 2008 starting with the bait of weevils naturally infected by entomopathogenic fungi by using pseudo stem traps. Then, the efficiencies of Columbian traps (disc on stump trap) on which inoculum was laid in plate (plate traps) or on washers plywood on corm (plywood traps). These activities aimed to reach a practical, efficient, less costly, less time consuming and less labor intensive method that is currently acute. The document is therefore not an exhaustive review of results obtained but its presents series of methods conducted in Côte d’Ivoire exploiting local isolates of Metarhizium sp. for the field control of banana weevil Cosmopolites sordidus.

A survey of 17 banana plantations reaching 6500 ha was conducted from April to August 2008, during which 3.171 pseudo term traps (Figure 1) were baited in 294 plots. 11 isolates of Metarhizium sp. were isolated from mycosed banana weevils naturally infected. Baiting and weevils removing: Traps were visited twise, 6th and 14th days after baiting. The adults weevils were counted in the 1st visit and left in the traps to ensure natural infection by soilborn fungi. Then, they were recounted and collected to the laboratory in transparent plastic containers (17 × 13 × 6 cm) containing pieces of fresh corm in the 2nd visit. Dead weevils were removed daily.

Isolation of fungi from mycosed weevils: Isolation of fungi from mycosed weevils was made following [4] method. Mycosed weevils were first disinfected in 1% sodium hypochlorite for 30 s and rinsed 3 min for 3 times with sterile distilled water. They are then wiped with sterile blotting paper. Disinfected weevils were placed on filter paper moistened with distilled water in Petri dishes and incubated in the dark room at ambient temperature until abundant mycelial appearance (Figure 2). Weevils were then singly immersed in 5% citric acid for 10 min and rinsed 3 times with distilled sterile water and then drained with filter paper. The mycelial fluff was then seeded in sterile Petri dishes on PDA medium. The Petri dishes were subsequently incubated in a dark room at 28 ± 2°C for 3 days. Mycelial colonies obtained were replanted on PDA medium for purification. An isolate is defined by colonies obtained on a dead weevil. The colony color of each isolate was noted. Isolate is then identified using method of Barry and Barnett (1972) key. 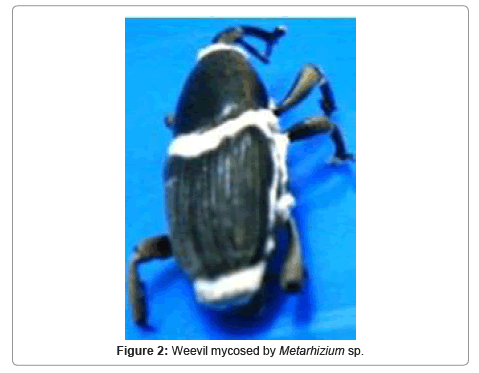 Inoculum production on rice substrate: After pathogenicity test in laboratory, the isolate of Metarhizium BME2 has been selected for field trials [5]. The inoculum is prepared in 700 ml jars. After sporulation on PDA medium in Petri dishes for 15 days, 15 to 20 g of this culture was mixed with sterile parboiled rice filling 3/4 of the jar and homogenized by shaking. The jars are then incubated in a dark room at room temperature. They are shaken daily to prevent caking rice grains by the fungus (Figure 3a). The conidial concentration per gram of rice was count for jar 15 days later (Figure 3b). The average reached 12.108 spores/g. The objective was to find field application method of the entomopathogenic fungus that could optimize its pathogenicity. Two types of traps were tested, plates trap and plywood trap.

The plate trap: The technique was to promote weevils attraction by kaïromone from the corm. The inoculum was placed in a plate on the corm sectioned horizontally (Figure 4). This plate prevents contact between inoculum and banana sap. Then inoculum was covered with another plate, leaving an entrance space of weevil adjusted by two sticks. The second plate protects inoculum for rainwater and irrigation. The device is finally protected by a gale weight piece of pseudostem about 10 cm length (Figure 4). Weevils access to the inoculum were performed by a piece of pheromone « COSMOPLUS » in the midle of the inoculum. Figure 4: Plate trap with inoculum of Metarhizium [5]. The black arrows indicate the enter space for weevils.

The plywood discks trap: This type of trap is similar in processing with plate trap. But no hole is dug in the corm to drop the disk. Plywood disk (15 cm diameter and 5 mm thick) were made on the flattened corm (Figure 5) surface. The inoculum was spread on washers plywood with 50 to 60 g per trap. The average concentration of conidia was 12. 108 spores/g. Mortality rate and LT50 generated by both methods plates trap and plywood trap were respectively 50%, 36 days and 90%, 6 days [6].

In addition the implementation of plate trap is tedious due to the notch made in the stump. Also, the notch serves as a shelter for weevil whose access to the inoculum rate becomes lower with time, whereas most borers on plywood traps become infected (Figure 6). Limit of both traps: Trapping made with plates or plywood

• Trapping efficiency is related to the corm freshness and to the number of traps / ha required (30 to 40 traps). The both plates trap and plywood trap involve only one trap for banana plant. Thus,

• The traps positions are also conditioned, and the homogeneity distribution of traps in the plot is also reduced.

1Pseudo stem traps inoculated: Pseudo term trap inoculated aims to limit the sources of reproduction, hiding food and adult constituted by residues of stems in the plots after trap were maid presented above (Plywood trap and plate traps). The inoculum is placed on rectangles plywood (Figure 7) a biodegradable material for avoiding direct contact with soil microorganisms. Attracting adult on inoculum is further enhanced with a piece of pheromone « COSMOPLUS » covered with another piece of plywood on which a slice of pseudo term is deposited while promoting access to inoculum using chopsticks (Figures 8 and 9). The whole is covered by a Polyethylene film. The polyethylene film protects trap for irrigation and rain water, extends the denaturation of pseudo stem-trunk covering the inoculum and the sporulation of the fungus. More the polyethylene film retains the weevil on the inoculum (Figure 10) by creating microclimate for chimiotropisme and chemotactisme conditions (humidity, darkness ...). Figure 10: Weevil on the inoculum into inoculated pseudo stem trap.

The mortality rate of weevils collected in these traps inoculated exceeds 50%, otherwise 3 to 4 traps can be made with a pseudo stem freshly harvested bananas. In addition, the trapping provides greater freedom in the placement, increasing the number of traps and the homogeneity desired of their distribution on the area. The return of the fungus in its natural habitat is also facilitated by rapid re-colonization of the soil through the biodegradable material (plywood).

Production of inoculum on organic substrates: In order to widespread use of the fungus, the foodstuff rice is expected to be substituted by an organic substrate as agricultural residues: cocoa waste, coffee waste, rice bran and sawdust (Figure 12). The both coffee and cocoa wastes residues were already used for organic fertilization in banana plantation.

The inoculum produced on the organic substrate is applied in established stands throughout pseudo term traps (Figure 13a). Fungus was then incorporated into the soil (Figure 13b) enhancing its persistence in the plot.

Figure 13: Methods to apply inoculum of Metarhizium sp. grown on organic substrates. (A) Preventive applying of inoculum arround banana plant. (B) Inoculum incorporated in the soil after the disappearance of pseudo stem trap.

For fallow sanitation before replanting, the fungus produced on coffee or cocoa waste substrates was associated to pheromone (Figure 14) us described above.

The methods implemented will contribute to the control of banana weevil, integrating prohylactic methods whereas chemical could be practiced on biological warning.

All these methods are being tested in banana plantations in Côte d’Ivoire. The project was financed by FIRCA (Interprofessional Fund for Agricultural Research and Council). We are grateful to plantations managers.

Copyright: © 2015 Aby N, et al. This is an open-access article distributed under the terms of the Creative Commons Attribution License, which permits unrestricted use, distribution, and reproduction in any medium, provided the original author and source are credited. 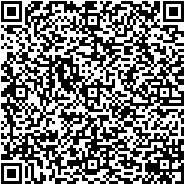