Intermittent Confusion in a Cirrhotic Patient Not what it Seems

Copyright: ©2015 Sanath A, et al. This is an open-access article distributed under the terms of the Creative Commons Attribution License, which permits unrestricted
use, distribution, and reproduction in any medium, provided the original author and source are credited

Patients who underwent jejunoileal bypass procedures to promote major weight loss can experience a wide array of undesirable complications. One of the most notorious was the development of cirrhosis with varying degrees of loss of overall liver function. Once this complication was widely recognized, the surgical procedure was largely abandoned in favor of other bariatric procedures which are not associated with the complication.

We describe an unusual case of alteration of behavior in a patient with a jejunoileal bypass over 10 years after having this surgery for morbid obesity. The patient was a 45 year old white male who had bypass [1] done 10 years before presentation. He achieved a weight loss of 75 lbs over that period. However, the patient described periods of time when he experienced polydipsia and confusion. The episodes occurred at a rate of 2-5 times a month and could last for days. This happened on an unpredictable schedule and significantly interfered with his ability to referee soccer matches. They were not associated with any signs of GI bleeding or infection. Most of the time he had a premonition of the episodes in the form of intense polydipsia. After reading some articles on hepatic encephalopathy (HE) on the internet, he decided he may have HE on the basis of cirrhosis due to jejunoileal bypass. He arranged for a liver ultrasound through his primary care physician and based on pronounced nodularity on the ultrasound it was decided that he indeed had cirrhosis. Some of the articles he had read on HE were written by one of the two authors of this paper (KDM), so he obtained a referral for consultation.

The initial office visit was noted for, in retrospect, some degree of irritability in the patient. He had virtually normal liver tests and the rest of his lab tests were unremarkable except for a reduced serum bicarbonate level of 19 meq/L. He had no evidence of hyperglycemia to explain polydipsia. Physical examination was notable for a few spider angiomata on the upper chest but no other stigmata of liver disease were noted.

After the first visit, it was decided that the patient may have had recurrent bouts of HE despite normal liver tests. We considered the possibility that the combination of cirrhosis and major portal systemic collateral vessel formation post operatively were responsible for these episodes of possible overt HE. However, because the mental status changes were not prominent at the initial visit it was decided that we would try and have the patient evaluated when more severely affected by his episodes. Another bout occurred a month later, his wife drove him to our medical center where he was reevaluated. This previously benign behaving individual presented on this occasion with striking belligerence. In addition, he drank water from the water fountain outside the office door incessantly and refused to stop to allow examination.

Repeat lab tests still revealed a reduced serum bicarbonate level of 17 meq/L and serum ammonia was in the normal range. A test was ordered which ultimately resulted in identifying what was wrong with the patient. His assay showed significantly elevated levels of D-lactate and D-lactic acidosis was diagnosed to be the cause of the episodes of confusion. Bacterial overgrowth may occur in the blind loop of the small bowel (Figure 1) which leads to production of excessive amounts of D-lactate that led to episodes of confusion in this patient. Treatment with antibiotics has been reported in literature with an attempt to control colonization of the intestines with D-lactate producing bacteria but the results have not been very consistent. The patient in this case chose to have the bypass reversed (surgery to return the jejunoileal bypass to the origin) when he was made aware of the beneficial effects of the surgery on overall long term liver function. In addition, he was informed that it would probably lead to the cessation of the recurrent bouts of confusion due to D-lactic acidosis. On subsequent follow up after reversal, the patient reported no further episodes of confusion or polydipsia. 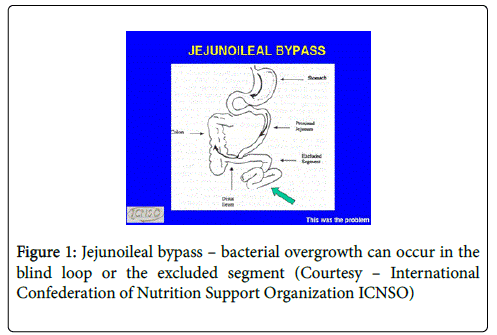 This patient had D-lactic acidosis which has been described in patients who have had jejunoileal bypass for weight loss [2]. Most of the cases of D-lactic acidosis due to bypass surgery have been reported to occur within 5 to 10 years after surgery. The unique thing about this patient is that he presented a diagnostic problem because he had underlying cirrhosis as well which led to the suspicion that the patient could have had recurrent bouts of overt HE. When D-lactate is produced by bacteria the body has limited capacity to metabolize that and high quantities of D-lactate can accumulate in the serum and cause episodes of confusion. In retrospect, because the liver function tests were unremarkable and the acidosis was present the diagnosis was fairly obvious. This condition is quite rare but has been described previously in literature.