Intestinal Transplantation in a Patient with Superior Vena Cava Thrombosis

Copyright: © 2014 Yandza T, et al. This is an open-access article distributed under the terms of the Creative Commons Attribution License, which permits unrestricted use, distribution, and reproduction in any medium, provided the original author and source are credited.

In patients undergoing small bowel transplantation, the current consensus is to avoid transplanting patients with insufficient vascular patency to guarantee easy central venous access for up to 6 months following transplantation. Here we present the case of a patient who received an intestinal transplant despite obstruction of the superior vena cava (SVC). The complicated post-operative outcome supports the view that these patients should be transplanted when easy central venous access is available.

The anesthetic management of recipients undergoing SBT includes the potential for large volume shifts and massive blood loss necessitating large-bore central venous access and invasive monitoring for rapid infusions of large quantities of crystalloid and blood products [1]. After transplantation, patients need parenteral nutrition for a period that may not be predicted. Furthermore, central venous catheter (CVC) infections are not rare after transplantation, leading to the change of CVC placement to avoid lethal sepsis or venous thrombosis. Therefore, the current consensus is to avoid transplanting patients with insufficient vascular patency to guarantee easy central venous access for up to 6 months following transplantation [1,2].

Here we present the case of a patient who received an intestinal transplant despite obstruction of the superior vena cava (SVC). The complicated post-operative outcome supports the view that these patients should be transplanted when easy central venous access is available.

A 60-year-old woman with myopathic chronic intestinal pseudo-obstruction was referred for isolated small intestinal transplantation in June 2011. Small intestinal transplantation was indicated because of recurrent severe sepsis episodes, some of them requiring intensive care unit hospitalizations. During the pre-transplant work-up, ultrasound and high-resolution computed tomography (CT) scanning of the neck and thorax revealed extensive veno-occlusive disease involving both upper limbs, both internal jugular veins, both sub-clavian veins, the left innominate vein, and the SVC above the azygos vein (Figure 1). There were marked collateral vessels in the chest, a large azygous and hemiazygous vein. Haematological investigations excluded a thrombotic tendency. Radiologic attempt to re-establish superior vena caval patency using a transcatheter method and stenting failed [3]. 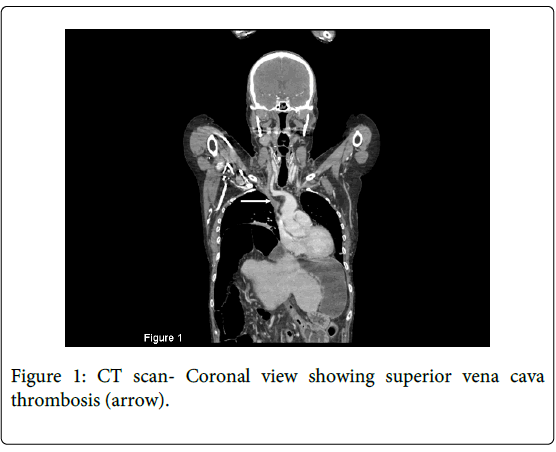 In October 26th, 2011, small intestinal transplantation was undertaken. The recipient operation started with surgical dissection of the left femoral vein in the thigh. A 12-French double-lumen Hickman catheter was placed in the left femoral vein with the tip of the catheter positioned just distal to the retrohepatic IVC. This remained the patient’s only intravenous access. The graft included small bowel and ascending colon. Graft vascular reconstruction was accomplished by inserting the superior mesenteric vein into the recipient infrahepatic inferior vena cava and by anastomosing the donor superior mesenteric artery to the infrahepatic aorta. Reperfusion of the graft was performed after a cold ischemia time of 470 min and a 40 min warm ischemia time without any complication. Reestablishment of intestinal continuity was accomplished by jejuno-jejunostomy, and by anastomosing the donor ascending colon to the recipient rectum. At the end of surgery, the Hickman catheter was replaced by a triple-lumen CVC. The total surgical time was 9 hours. The total volume infused was 20000 mL consisting of crystalloids 15000 mL, packed red blood cells 1500 mL, Hespan 2000 mL, and 5% albumin 1500 mL. Such an amount of fluids was explained by a persistent intraoperative hypotension despite the absence of massive bleeding.

The patient was extubated 2 hours after the end of transplantation because she was normothermic, and there was no abnormality in complete blood cell count and blood chemistry tests including blood gases. Eighteen hours after surgery, the patient presented with sudden cardiopulmonary arrest associated with airway obstruction. She had a large facial and neck edema that did not allow visualization of the larynx with a laryngoscope (Figure 2). Reintubation was rendered possible through the oral route with the use a pediatric fibreoptic bronchoscope using the guided technique [4]. She recovered after active resuscitation and mechanical ventilation. Total serum tryptase measured in blood sample taken during resuscitation was normal. The diagnosis of superior vena cava syndrome (SVCS) was made. The SVCS was treated with drastic reduction of intravenous perfusion, changing of bedposition with head elevation, diuretics, and intravenous heparin. The patient recovered a normal consciousness on postoperative day 7. The patient’s neck and facial swelling improved slowly within three weeks. In order to avoid recurrence of superior vena syndrome with airway obstruction, a preventive tracheotomy was performed on postoperative day 14. The upper airway obstruction improved sufficiently for decannulation and closure of the tracheotomy on postoperative day 28. Figure 2: Clinical aspect of the acute superior vena cava syndrome (SVCS) with a large facial and neck edema. Reintubation was rendered possible through the oral route with the use a pediatric fibreoptic bronchoscope using the guided technique.

The immunosuppression protocol consisted of anti-thymociteglobuline (Thymoglobuline®) induction, tacrolimus (target tacrolimus trough blood levels were between 15 and 20 ng/mL) and steroids for maintenance therapy. She was discharged at 51 days after transplantation. Twenty nine months after transplantation, the patient is well on tacrolimus (range 5 to 8 ng/mL) and steroids (prednisone: 5 mg/day), with a normal oral diet, and no episodes of rejection or enteritis (Figure 3). Patients with intestinal failure are often managed with total parenteral nutrition (TPN) via a central venous catheter placed through one of the major veins of the neck (eg, jugular, sub-clavian veins). These patients often have a history of repeated infections and thrombotic episodes secondary to these central venous accesses for TPN administration. Catheter-related thrombosis is caused by several factors including intraluminal obstruction (eg, thrombus, stenosis, or indwelling foreign body) such as in our patient, or external compression (eg, tumor) [5,6]. SVC thrombosis is complicated by SVCS when the ability of collateral blood vessels to compensate for the SVC obstruction is exceeded [7].

The clinical diagnosis rate of thrombosis of the major veins of the neck associated with TPN has been reported to be 10% to 20% [8]. However, if phlebography is used, the incidence raises to 40% to 60% [9]. This makes venous thrombosis the most frequent complication of TPN [8].

Thus, in patients referred for SBT who have been maintained on long-term TPN, the presence of SVC and/or IVC obstruction must be looked for in the pre-transplant work-up even in the absence of the clinical signs of SVC syndrome. The diagnosis of chronic SVCS may often be made based on history and physical examination [10-13].

However, imaging is the mainstay for definitive diagnosis and characterization of chronic SVCS. Duplex ultrasound is the initial imaging test of choice as the technique is cost effective, noninvasive, does not involve ionizing radiation, and has high sensitivity for peripheral vein thrombosis [13]. Contrast venography may be necessary to confirm a diagnosis of SVCS if clinical suspicion remains high despite negative duplex ultrasound evaluation [5]. Magnetic resonance angiography (MRA) and computed tomography angiography (CTA) provide accurate, noninvasive methods for detecting central venous stenosis or obstruction. Both correlate extremely well with venography and can provide more detailed data regarding the level and extent of obstruction, as well as the formation of collateral pathways [6].

According to the International Intestinal Transplant Registry, 2500 small bowel transplantations have been performed worldwide [14]. However, there are very few reports of cases of intestinal transplantation performed in patients with SVC [8,15,16]. In most patients’s referred for intestinal transplantation with SVC thrombosis, unconventional central venous access was used to restore venous access before transplantation [15]. Even when catheter placement was possible, the teams underlined that in the event of severe cardiovascular instability or massive hemorrhage in the intraoperative or postoperative period, there was every chance that these catheters could have proven inadequate, even resulting in serious morbidity or mortality.

Several options have been proposed to treat SVC thrombosis due to benign obstructions: anticoagulation, radiation, fibrinolysis, chemotherapy, angioplasty, stenting, and the more invasive surgical intraoperative venovenous bypass [17,18]. In our patient, the radiologic attempt to re-establish superior vena caval patency using a transcatheter method and stenting failed because of the extended thrombosis involving all the veins of the upper limbs and SVC, and because of the organization of the thrombus which precluded the effectiveness of anticoagulation and catheter-directed or mechanical thrombolysis.

We used a Hickman Catheter to infuse the patient intraoperatively. The presence of the Hickman catheter facilitated lateral clampage of the IVC for the vascular anastomosis between the graft superior mesenteric vein and the recipient IVC. This large bore intravenous line was also utilized to measure a baseline pressure and pressure changes throughout the case. Our patient received 20 litres of fluids intraoperatively. We explain the need to use such an amount of fluids in a 60 years old lady by the intraoperative that we observed in that patient, despite the absence of massive bleeding. Indeed, as reported by Matsusaki et al. [9], the incidence of intraoperative hypotension is significantly higher in patients who need cannula via the femoral veins because of thrombosis of the upper body venous system, compared to patients receiving insertion of a large cannula via the upper body central venous system.

In our patient, the postoperative occurrence of circulatory instability or collapse, mucosal edema and mechanical obstruction of the airway may have been due to acute allergic reaction. However, anaphylaxis generally occurs in the context of various initial cutaneous manifestations such as urticaria, angioedema, flushing or pruritus that were absent [19]. Normal total serum tryptase measured within minutes following cardiac arrest was not in favour of an allergic reaction as, to date, its increase is the marker most widely recommended for the diagnosis of anaphylaxis [19]. Thus, SVCS is likely responsible of the cardiac arrest in our patient through the airway obstruction due to laryngeal edema.

In contrary to what we expected, tracheotomy was easy to perform. It facilitated the postoperative care in this patient who needed a large amount of fluids after surgery. Our patient did not present signs of increasing intracerebral pressure such as changes in mental status, confusion, lethargy, seizures, and coma. She totally recovered her cognitive functions.