Copyright: © 2016 Lee JH, et al. This is an open-access article distributed under the terms of the Creative Commons Attribution License, which permits unrestricted use, distribution, and reproduction in any medium, provided the original author and source are credited.

At the present time, only few reports including systematic reviews of malignant peripheral nerve sheath tumors (MPNSTs) with spinal involvement have been existed. Although there were reports of both MPNSTs of paraspinal soft tissue (type 1) resulting in secondary vertebral destruction and MPNSTs primarily originated from intraosseous of vertebra itself (type 2), these kinds of tumors are exceptionally rare. In this present report, we hereby demonstrated a case of type 2 MPNSTs which is not related to neurofibromatosis type 1 (NF 1) occurring in the thoracic spine and reviewed the clinical, radiologic, and pathologic as well as shared part of our experience in treating this rare condition. Interestingly, MPNSTs usually have a high rate of recurrence both local and metastasis even in the cases of successful en bloc resection with adjuvant therapy, but not in ours for 5-year follow up.

Malignant peripheral nerve sheath tumors (MPNSTs) are known as rare tumors [1]. Although they constitute 3-10% of all soft tissue sarcomas [2], the incidence of MPNSTs in general population is seldom reported (less than 1%) [3]. Given that the MPNSTs with spinal involvement are even more unusual. From previous literature, MPNSTs can be found sporadically ranging from 43-57% and nearly half of all MPNSTs associated with neurofibromatosis type 1(NF-1) [4]. In addition, the history of prior radiotherapy can be related to 3-11% of these tumors as well [5,6]. According to few reports as well as scant review literatures have been existed [3,4,7,8], the MPNSTs with spinal involvement are still considered as an infrequent topic. There were previous reports about MPNSTs at paraspinal soft tissue (type 1) resulting in secondary vertebral destruction [2] and MPNSTs primarily originated from intraosseous of vertebra itself (type 2); however, these kinds of tumors are still exceptionally rare, particularly for type2 MPNSTs.

In this present report, we hereby described a case of type 2 MPNSTs not related to NF-1 occurring in the thoracic spine and demonstrated the clinical, radiologic, and pathologic findings as well as shared part of our experience in treating this rare condition as well as reviewed some related literature.

A 30-year-old woman initially presented to internal medicine outpatient clinic with a history of 2-week back pain, epigastric pain and insignificant weight loss. Systems review was noncontributory, except those details stated in the history of present illness. After gastroduodenoscopy and esophagography had revealed normal results, she was referred to our clinic. On examination, her gait and posture were demonstrated within normal limit. Neurological function was presented normal with good motor power, intact sensation and normal reflexes as well. No definite area of back pain could be located by physical examination. The earlier chest radiographs, however, revealed abnormal findings (Figure 1) with further supported by CT scan (Figure 2). An obtained MRI scan was performed and delineated an expansive soft-tissue mass which invaded the T8 vertebral body as well as both pedicles from T7 to T9 vertebra diffusely (Figure 3). According to relatively high prevalence of spinal metastasis including the other more common pathologies were suspected, PET/CT and whole body bone scan were performed. Whereas whole body bone scan did not demonstrate any abnormality focal tracer uptake, PET/CT scan showed an abnormal soft tissue uptake at the paraspinal area from T7 to T9. 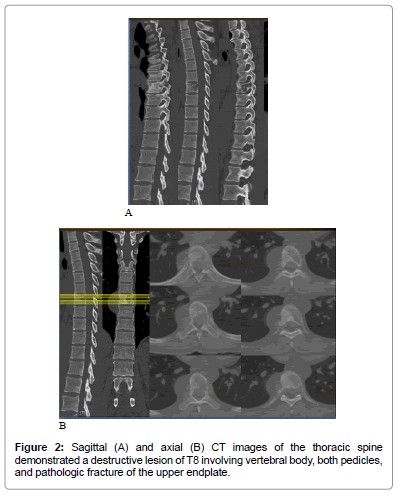 Figure 2: Sagittal (A) and axial (B) CT images of the thoracic spine demonstrated a destructive lesion of T8 involving vertebral body, both pedicles, and pathologic fracture of the upper endplate. Because of several abnormalities from imaging findings, the authors decided to do the surgery with the goal of complete mass removal followed by reconstruction simultaneously. The removal tissues can be taken to make a definite diagnosis by the histopathological studies as well. Preoperatively, angiography and embolization was done using coils and gelfoam by interventional radiologist. Laminectomy of T7 to T9 and resection of both 7th to 9th proximal ribs were done initially. Then, en bloc resection of the tumor was undertaken in a fashion of single posterior approach by senior spine surgeon (JHL) under somatosensory and motor-evoked potential monitoring. The extradural mass together with T8 vertebra was completely excised, in conjunction with T7 and T9 corpectomy (Figure 4). Intraoperatively, the paraspinal mass was shown as minimal adherent to the pleura of right lung. After the https://www.omicsonline.org/open-access/enhancing-the-antitumor-effects-of-cancer-peptide-vaccine-therapy-2157-7560-1000330.php?aid=77294 in spinal canal was separated from dural sac and excised completely, an expandable cage used for reconstruction of the levels between T7 to T9 was filled in the defect. Finally, the pedicular screw fixation and fusion with mixed auto-iliac crest bone graft and tricalcium phosphate from the levels of T4 to T12 was performed. Histopathologically, the sections from the excised soft tissue mass revealed densely cellular fascicles alternating with hypocellular, myxoid zones and occasional nuclear palisading. Cytomorphologically, the nuclei were wavy, buckled, comma-shaped, and oval whereas cytoplasm was pale. Tumor cells displayed nuclear atypia and pleomorphism but generally lack of mitotic figures (Figure 5). In several foci, Wagner- Meissner body- like structure was identified. The sections from the T8 vertebral body and the 8th rib showed the same histologic picture as from the excised soft tissue mass. Postoperatively, plain spine radiographs confirmed satisfactory reconstruction, fixation, and sufficient resection. There were no change of motor, sensation and reflexes postoperatively. The patient was given local radiotherapy by receiving 49Gy in 23 fractions over 8 weeks to the effected spine. At 5-year follow-up, the plain radiographic images showed a solid fusion and acceptable appearance (Figure 6). Of note, the patient was asymptomatic without local recurrent or distant metastasis supported by MRI, whole body bone scan and PET/CT for 5-year follow-up. 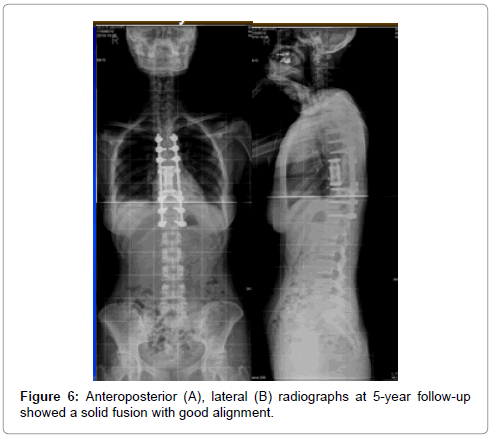 Figure 6: Anteroposterior (A), lateral (B) radiographs at 5-year follow-up showed a solid fusion with good alignment.

MPNSTs are kinds of soft tissue sarcomas arising from peripheral nerves or thought to be differentiated from nerve sheath elements including Schwann cells, fibroblasts, perineural cells or pluripotent cells of neural crest origin [7,9]. In the past, MPNSTs have interchangeable names as malignant schwannoma, malignant neurilemmoma, neruofibrosarcoma, or neurogenic sarcoma [7,10-14]. According to the previous reports, the occurrence of MPNSTs in NF-1 patients was 3% to 4.6%, and nearly 50% found in NF-1 patients [6,15]. We can classify the spinal MPNSTs into two types as described by Zhu et al. Specifically, type 1 or soft tissue type which can be further subclassified as type 1A (dumbbell) and type 1B (paravertebral) and type 2 or intraosseous type which the tumors originated from vertebral elements without soft tissue involvement [4]. Although MPNSTs generally arise as a result of malignant transformation of neruofibromas in patients with NF-1, it is not our case. Our presented case is type 2 (intraosseous) because intraoperative finding demonstrated the tumor mass originated from T8 vertebral body and outgrew as paraspinal soft mass that did not attach to the neighboring neural structures. From our current knowledge, this type of spinal MPNSTs has a small number of reported cases in the literatures [3,8,16,17]. The authors discovered only one paper written by Gnanalingham K et al, which reported about intraosseous MPNST occurred in the thoracic spine [8]. Furthermore, their surgical strategy reported in that paper was totally different from ours [8]. Because of the unspecific imaging findings of MPNSTs, inclusion of the differential diagnoses of other common primary bone sarcomas, spinal metastases and other common spinal pathologies should be kept in mind. For such a reason, the histopathological studies are necessary for definite diagnosis. Initially, the differential diagnoses were schwannomas, MPNSTs and other spindle cell sarcomas. In this patient, the histological and immunohistochemical studies revealed the most diagnosis of malignant peripheral nerve sheath tumor [3,4]. Although the demonstration of antibodies to S-100 were negative as well as the mitoses were seldom observed, the histologic features aimed to the diagnosis of low grade malignant peripheral nerve sheath tumor due to diffuse nuclear atypia, increased cellularity with abundant epithelioid features, and the result of ki-67 proliferation index>5% [3,4]. Of note, although the S-100 protein staining was negative in our case, the degree and pattern of staining for S100 can be varied in MPNSTs as described in previous studies [4,18].

Despite almost of malignant primary spinal tumors have an unfavorable outcome to chemotherapy and conventional radiotherapy, there are many studies supported to surgical treatment especially by the method of en bloc excision with negative surgical margin [19,20]. Recently, there was a retrospective study revealed that postoperative prognosis for MPNTs was quite poor with high recurrence and low survival rate in the condition of positive surgical margin [4,5,6,21- 23]. As demonstrated by previous study that patients with positive surgical margins have a 1.8-fold risk of local recurrence and a 1.1- fold risk of distant metastasis at 10-year cumulative incidence [22]. In addition, there is an increasing evidence of en bloc spondylectomy in the improvement on rate of local control and disease-free survival for primary malignant spinal tumors [24,25]. Theoretically, a complete surgical excision is critical to achieve optimal local control and overall survival for the spinal MPNSTs. However, even after total en bloc resection, about 32-65% of MPNSTs are realized to recur in a median interval of 5 to 32 months both local and metastasis [5,6,9,22]. Total en bloc spondylectomy can be performed through staged or simultaneous anterior and posterior approach, or posterior-only approach [26]. Originally, en bloc means to remove the lesion in a single piece; however, for the complexity of the spine and related structures, en bloc can mean remove the lesion in its entirety [27]. In this present case, we selected a posterior-only approach because of the benefit of achieving complete tumor resection and circumferential spinal reconstruction in a single setting. Due to the advancement of anatomical knowledge around spine, modern instruments, and neuromonitoring, en bloc for type 2 MPNSTs can be safely performed.

In conclusion, we reported a very rare case of primary intraosseous MPNSTs of the thoracic spine. From our review, to date, total en bloc spondylectomy could be the treatment of choice for the selected case of the spinal MPNSTs. Posterior-only approach can be performed safely with a delicate preoperative surgical planning and management in selected patient. For our case report, although evidence of local recurrence or metastasis spread were absent during the 5-year follow up, the longer period of follow up and a higher number of cases are necessary for further study.