Copyright: © 2015 Jerraya H, et al. This is an open-access article distributed under the terms of the Creative Commons Attribution License, which permits unrestricted use, distribution, and reproduction in any medium, provided the original author and source are credited.

Jejunal diverticulitis is an uncommon condition, characterized by unspecific symptoms which may lead to delayed diagnosis and high risk of mortality. Computed tomography can be very useful for early diagnosis. We reported a case of 42-old-woman who presented with acute abdomen due to jejunal diverticulitis. The diagnosis was strongly suspected preoperatively by computed tomography but other entities such as perforated neoplasms and foreign body perforation couldn’t be formally eliminated. By laparoscopic approach, the diagnosis remained uncertain. In view of diseased jejunal segment, it was decided for bowel resection followed by a side to side anastomosis. Post operative course was uneventful and the pathological analysis was consistent with the diagnosis of jejunal diverticulitis.

Jejunal diverticulitis is an uncommon condition much less frequent than colonic diverticulitis [1]. It is characterized by unspecific symptoms responsible of delayed diagnosis with an increased risk of mortality [2].

Herein we report a case of jejunal diverticulitis, its diagnosis was strongly suspected preoperatively by computed tomography (CT) allowing us to perform a mini invasive surgery by laparoscopic approach.

A 42-old-woman with no significant past medical or surgical history complained of moderate abdominal pain with vomiting for four days.

She denied any similar episodes in the past. Physical examination found she has temperature of 37.6°C and tenderness in the perumbilical area.

The abdominal ultrasound was normal. Abdominal CT with multiplanar reconstructions showed on axial views a focal area of asymmetric jejunal wall thickening most prominent on the mesenteric side of the bowel, containing extraluminal air with edema of the surrounding tissues (Figure 1). 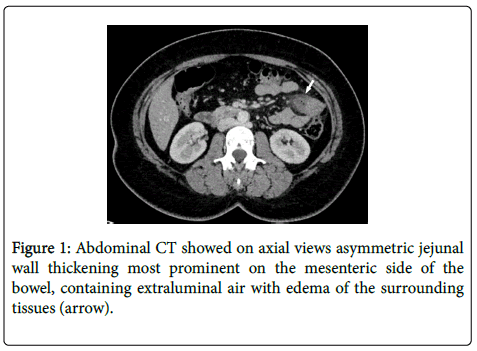 Figure 1: Abdominal CT showed on axial views asymmetric jejunal wall thickening most prominent on the mesenteric side of the bowel, containing extraluminal air with edema of the surrounding tissues (arrow).

The focal inflammatory process was better demonstrated in the coronal views (Figure 2). 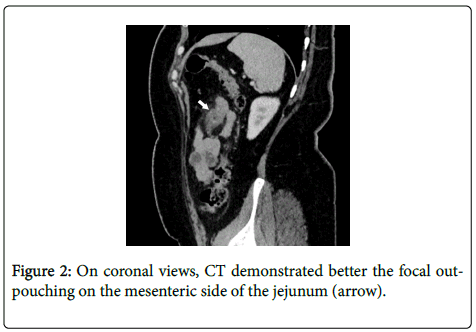 Figure 2: On coronal views, CT demonstrated better the focal outpouching on the mesenteric side of the jejunum (arrow).

CT findings evoked strongly a jejunal diverticulitis but a perforated neoplasm of the jejunum couldn’t be formally eliminated. At laparoscopic exploration, there was no peritonitis, the inflammatory process was identified arising from the mesenteric border of the jejunum at 60 cm from the Treitz ligament (Figure 3). Figure 3: Intraoperative image showing the inflammatory process which arose from the mesenteric border of the jejunum (arrow).

A laparoscopically assisted resection of the involved jejunum and mesentery including the inflammatory process was performed (Figure 4) followed by a side to side anastomosis. Pathological analysis of the resected specimen was consistent with the diagnosis mesenteric abscess related to jejunal diverticulitis. Post operative course was uneventful and the patient was discharged home on hospital day 4. 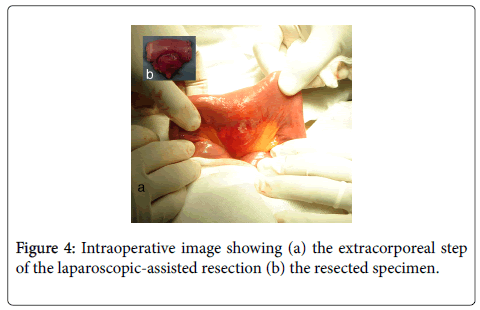 Figure 4: Intraoperative image showing (a) the extracorporeal step of the laparoscopic-assisted resection (b) the resected specimen.

We reported a case of jejunal diverticulitis which underlined the diagnostic difficulties of this uncommon condition.

Jejunal diverticula are an acquired disease consisting of thin walled mucosal herniations through gaps in muscular layers and generally extending along the pathway of supplying blood vessels [3]. Their origin has not been well clarified. Hypotonic small intestinal motility dysfunction, in relation to degenerative processes such as myo and neuropathy of the myenteric plexus, with consequent bacterial overgrowth is often considered the cause [4]. The incidence rate of jejunal diverticula is of 0.1-1.5% [5]. However, this rate is probably underestimated due to the often asymptomatic nature of this disease [3]. Otherwise, the symptoms are usually related to a complication such as perforation of the diverticulum [5]. Commonly the clinical presentation is unspecific and the symptoms may vary from vague intermittent abdominal pain to acute abdomen with leucocytosis and fever [2]. Plain radiographic and ultrasound findings are rarely contributory in the diagnosis [4] whereas CT, as shown in our patient, may help to demonstrate the diagnosis by revealing some indirect signs as asymmetric thickness of the jejunum wall, inflammatory mass containing gas and /or feces-like material and edema in the surrounding tissues including fat and fascia layers [1,3]. However, these signs are non-specific and other entities should be considered such as perforated neoplasms and foreign body perforation [1]. Entrapped air in the mesentery may be in favour of the diagnosis of jejunal diverticulitis. Indeed, before perforation the inflammatory diverticulum was sealed by mesenteries, which explains entrapped air in the mesentery when perforation occurs instead of free air in the peritoneal cavity [6].

Treatment of jejunal diverticulitis usually consists in resection of the abnormal segment with primary end-to-end anastomosis. This choice is especially justified since the intraoperative diagnosis remains uncertain as was the case for our patient [1,6]. Although rarely reported in the literature, the laparoscopically assisted resection seems to be safe and feasible [7] and should be indicated whenever possible.

• Jejunal diverticulitis should be considered whenever CT shows a focal inflammatory process close to the jejunal wall.