Nature has given us remarkable opportunity to fight against diseases. Garlic has played an important dietary and medicinal agent throughout the history of mankind [1]. Garlic, Allium sativum is a member of the Alliaceae family has been widely recognized as a valuable spice and a popular remedy for various ailments and physiological disorders [1]. Allium is the most crucial representative genus of the Alliaceae group and comprises of 450 different species. These are randomly distributed in the northern hemisphere [2]. These species are characterized by a specific flavor and therefore, they are used for cooking so that human likes the taste of the food [3]. Many scientists have investigated garlic as a medicinally important spice. These studies have uncovered a number of results. Because of the research conducted on garlic and the components present in it, chemoprevention has attracted many chemists and biologists. In this article, we describe in brief the chemistry, structure, anticancer activity and mechanism of action of garlic as a whole instead of focusing on the individual molecules or diseases. A number of unsaturated sulfur compounds have been identified from garlic. The sulfur-sulfur bond of these molecules has significant effects on the anticancer properties of garlic.

Garlic contains minimum 33 sulfur compounds, numerous enzymes and minerals like, germanium, calcium, copper, iron, potassium, magnesium, selenium and zinc; vitamins A, B1 and C. It is also composed of 17 amino acids. Some of which are lysine, histidine, arginine, aspartic acid threonine, glutamine, proline, glycine, alanine, cysteine, valine, methionine, isoleucine, leucine, tryptophan and phenylalanine [4]. It is remarkable that garlic has a much higher amount of sulfur-containing molecules than any other Allium species [4]. These sulfur compounds are responsible for garlic’s strong odor. It is difficult to classify the nature of the odor. Many people like it while many hate it. Importantly, the sulfur compounds present in garlic are responsible for its numerous medicinal benefits [4]. One of the most predominant medicinally active compounds in garlic is allicin (diallyl thiosulfinate or diallyldisulfide). However, garlic is rich with alliin (S-allylcysteine sulfoxide), which is the most abundant [5]. Allicin is the strong antioxidant and scavenging compound present in garlic. Other molecules have also effects. These include phenols and steroids, which exert numerous pharmacological activities [2].

Numerous organic compounds can be isolated from garlic by stem distillation. These contain DADS, DATS, allyl methyl trislfide, allyl methyl disulfide, diallyl tetrasulfide, allyl methyl tetrasulfide, dimethyl trisulfide, and diallyl sulphide [6]. The composition of these organic components may change depending upon the production process and extraction methods. The structure of some of the most abundant sulfur compounds present in garlic is shown in Table 1 and Figure 1. Clearly, the structures of these molecules are unique and no generalizations are possible. For example, some of them are linear with 1-4 sulfur with monoalkene or dialkene and alkane. A few cyclic sulfur compounds with unsaturated linkages also exist. Some of the cyclic compounds have definite stereochemistry. To our knowledge no paper has described the most fascinating features of the alkene groups present in garlic. Careful examination of the structures reveals that these alkenes are not substituted. While much attention is paid to explain the diverse properties of garlic, it seems the role of alkene in garlic is ignored. If oxidation of the sulfur is involved in many of the biological processes including in inhibiting diverse cancers, a similar oxidation of the alkene group is also possible. Therefore, care must be taken when a scientist performs experiments to explain the biochemical pathways of garlic in cell and animal model. 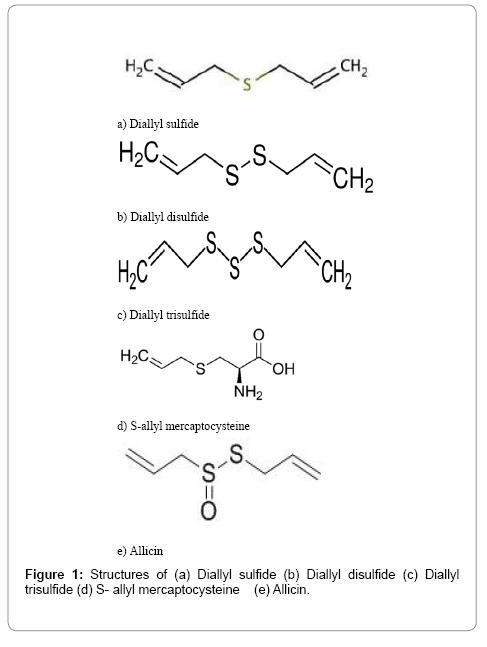 It has been demonstrated that garlic has anticancer activities [7]. Although garlic is specifically used on a regular basis by human as part of their diet, many even do not know the health benefits that this spice can offer. In China stomach cancer is very common among human and mortality rate is very high [7-9]. This is attributed to a high concentration of nitrate. It is believed that garlic may inhibit nitrate reduction using by bacteria as a mediator. This process lowers nitrite concentration in the digestive system and reduces stomach cancer development. You et al. [10] have demonstrated that smoking tobacco products, taking excess salty foods and moldy foods may cause stomach cancer. This risk of stomach cancer can be reduced with increasing uptake of garlic [11]. Galeone et al. [12] have conducted studies that show the importance of allium’s vegetables in the reduction of stomach cancer. From case studies, it is found that garlic should be used frequently. Clearly, garlic is helpful in developing numerous cancers and curing cancers. Abdullah et al. [13] in a study have showed that natural killer-cells of raw garlic and aged group have destroyed 139% and 159% cancer cells. Relatively aged garlic is proved better as this extract is an excellent chemopreventive medium for colorectal cancer. This extracts have stopped angiogenesis through a number of biochemical pathways. Of them, a suppression of endothelial cell mortality, proliferation of cells and tube formation is the crucial [14]. The anticancer properties of garlic are due to the presence of organic molecules in it. For example, Tadi et al. have reported that ajoene and dially sulfide cause AFB1 metabolism and DNA binding by inhibiting enzymes [15].

Garlic is one of the best natural sources of germanium and selenium. These two metals has the ability to prevent and cure cancer [16,17]. However, this is not conclusively proved if selenium itself or molecules derived from it was actually the chemo-preventive agent, although a negative relationship between selenium intake and the incidence of certain cancers are observed. Methyl selenocysteine is proved to be an excellent selenium molecule in reduction of tumor growth [18].

Mechanism Of Action Of Garlic

Like many other spices, the mechanism of action of garlic or garlic containing organic molecules against cancer is not understood. Therefore many authors have proposed different mechanisms in order to explain the behavior of garlic against tumor. Wargovich & Goldberg [19] have investigated the sulfide and disulfide molecules of garlic on organic carcinogens. Two important compounds, DMH (1,2-dimethyhydrazine) and NMBA (N-nitroso methyl benzylamine) are metabolized in the liver to carcinogenic intermediates, a pathway causes by their binding to the nucleus of the cell. It is important to note and verified by the fact that prior administration of diallyl sulfide can prevent nuclear damage induced by DMH and NMBA. These experiments dictate that diallyl sulfide stops the conversion of producing carcinogens and thus initiation of carcinogenesis can be prevented. Chung et al [20] have demonstrated that garlic lowered endogenous formation of carcinogens N-nitrosodimethylamine (NDMA) in human. This is supported by the fact observed by Singh et al. [21]. This group has demonstrated that garlic has induced a 35-60% reduction in DNA damage induced by NDMA in animal. Diallyl disulfide has further role in the chemoprevention process of garlic. The enzyme, Glutathiones- transferase (GST) conjugates electrophilic reagents and helps in the detoxification of numerous carcinogens. It is known that molecules that increase GST activity can inhibit carcinogen-induced neoplasia [22,23]. Interestingly oral uptakes of methyl trisulfide and diallyl disulfide are shown to stimulate glutathione-S-transferase activity periodically [24,25]. These studies suggest that an increase of glutathione-Stransferase activity in the human body by organosulphur compounds present in garlic is necessary as a protection against carcinogenesis.

It is known that oxygen radicals play a crucial intermediate in promoting and propagation of tumor. However, numerous antioxidants, scavengers, and enzymes like glutathine peroxidase inhibitors of cyclooxygenase and lipooxygenase are found to have effects on the oxidative stress and consequently on the formation of unstable species responsible for tumor promotion. Perchellet et al. [26] have showed garlic oil altered glutathione peroxidase activity, and altered the intracellular ratio of reduced form to oxidized form of glutathione.

In addition, garlic oil is found to stop lipooxigenase production, and thus arachidonic acid metabolism is disturbed [27]. Li et al. [28] have demonstrated the effects of aged garlic extract (AGE) and two of its enzymes, s-allylcysteine (SAC) and s-allyl mercaptocysteine (SAMC) against human breast cancer cell lines MCF-7 and MCF-7-s. An antiproliferative response to SAC and SAMC is observed. Moreover, an alteration in glutathione concentration without any changes in the glutathione metabolizing enzymes is observed. Interestingly, Xiao et al. [29] have showed that SAMC exhibits anti proliferative activity by binding to tubulin and therefore, it disrupts the microtubule assembly. This entire process has arrested cells in mitosis route, inhibited JNK1, caspase-3 route and finally to cell death. Xu et al. [30] have focused into the understanding of the antitumor action of ajoene, present in garlic. Ajoene-induced blood cancer cells HL60 are arrested in G(2)/M phase in cell cycle analysis and finally produces apoptosis. Oommen et al. [31] have showed that allicin stopped the growth of cancer cells in animal and humam model. It is demonstrated that allicin helped to form apoptotic bodies and nuclear condensation process and a DNA ladder in tumor cells. Allicin goes beyond further to activate all caspase enzymes and cleave of poly (ADP-ribose) polymerase. Xiao et al. [32] have showed that diallyl trisulfide present in garlic helps programmed cell death in human prostate cancer cell through activation of protein Bax and Bak. Chu et al. [33] have investigated the effect of S-allylcysteine and S-allylmercaptocysteine on the inhibition of prostate tumor cell invasion via restoration of E-cadherin expression. Kodera et al. [34] have demonstrated the effects of allixin (phytoalexin, present in galic) as a promising inhibitor of phospholipid metabolism. Patya et al. [35] have demonstrated that immune-stimulatory and anticancer properties of allicin. Interestingly, immune stimulatory properties of allicin are explained by redox-sensitive signaling process for example as an activation of p2 (ras). Druesne et al. [36] have demonstrated that diallyl disulfide (DADS) found in garlic inhibits colon cancer cells. Agarwal et al. [37] have showed that treatment of rats with garlic oil protects free radical injury and cancer in kidneys. It is obvious that organosulphur compounds present in garlic exert anticancer inhibitory properties through a direct reaction and inhibition of tumor cell metabolism, inhibition of carcinogenesis; and reaction with specific enzymes.

Garlic is an important spice that has numerous medicinal properties. The organic components present in garlic has sulfur and alkene bond in most of the examples. Remarkably, these organic molecules have excellent activities to inhibit the reduction of various types of tumor growth. A number of mechanisms have been advanced to explain the anticancer properties of garlic. The mechanism of action of garlic depends in the types of tumor. Nevertheless, further work is necessary to define the mechanism more precisely because a particular mechanism is proposed assuming the role of a single molecule present in garlic. However, none of the researchers have concluded any doubt about the anticancer properties of garlic. Therefore, studies on garlic as a chemo-preventative spice would continue to grow in the future.

BKB is grateful to the Community Health System of South Texas.

Copyright: © 2018 Borah P, et al. This is an open-access article distributed under the terms of the Creative Commons Attribution License, which permits unrestricted use, distribution, and reproduction in any medium, provided the original author and source are credited.