Background: The prognostic value of KLF4 in triple negative breast cancer (TNBC) was described. Here we report an analysis of KLF4 expression in peripheral blood circulating tumor cells (CTCs) from patients with TNBC, which provided evidence that KLF4 negatively regulates the metastasis and growth of TNBC.

Method: We assessed the expression levels of KLF4 in 84 patients with TNBC by immunohistochemical staining and studied the patterns of metastasis/recurrence clinicopathologically. In addition, CTCs in the peripheral blood of TNBC patients were identified and compared with primary lesions in terms of KLF4 expression. Moreover, the expression of KLF4 was inhibited by transfecting cultured TNBC cells (MDA-MB231) with the small interfering RNA (siRNA) of KLF4 to analyze the effects of KLF4 on cell proliferation and epithelial-mesenchymal transition (EMT) -like changes.

Conclusion: TNBC patients with reduced KLF4 expression had poor outcomes. The results of our experiments suggest the expression of KLF4 is one of the important factors that inhibit the EMT and growth of TNBC.

Triple negative breast cancer (TNBC) is consisted with heterogeneous groups that are known generally as the hormone receptor (HR) negative and ERBB2 receptor (HER2) negative intrinsic subtypes, and accounts for approximately 15% of all breast cancer cases [1]. Moreover, TNBC is known to be more sensitive to anticancer drugs than luminal type breast cancer. However, TNBC is highly malignant and prone to metastasis and relapse, and therefore has poorer prognosis than other sub-types [2]. The mechanism of higher malignancy of TNBC has not been sufficiently elucidated.

Currently, there are high expectations in regenerative medicine for using induced pluripotent stem (iPS) cells against difficult-to-treat diseases. iPS cells are prepared by introducing the genes Oct3/4 and Sox2 as well as other genes such as KLF4, c-Myc, Nanog, and Lin28 into normal human cells (e.g. fibroblasts) [3]. KLF4 is required for the epigenetic reprogramming of the somatic genome [4]. In contrast, it is reported that KLF4 is highly expressed in atypical epithelia, breast cancer, and squamous cell carcinoma of the laryngopharynx [5]. KLF4 and c-Myc are oncogenes that induce cell mutations. Mice engineered to highly express KLF4 develop skin hyperplasia and squamous cell carcinoma [6,7].

We have reported that breast cancer patients with strong expression of KLF4 had better prognosis, especially in TNBC patients [8,9]. In the present study, we analyzed KLF expression in TNBC patients that had the operation of breast cancer resection in our breast cancer research group hospitals. And we demonstrated that the inhibition of KLF4 expression up-regulated the activity of tumor growth and the expression of the epithelial to mesenchymal transition (EMT) markers in in vitro. These results revealed that the KLF4 plays an important role for reduction of tumor growth and metastasis in TNBC.

Consecutive 84 TNBC patients who underwent surgery at hospitals of toyama university breast research group (TUBRG) from January 2001 to December 2011 were evaluated. The study protocol was approved by the ethics committee in each hospital.

Antibodies for the immunohistochemical staining were selected as follows. Anti-KLF4 (ab34814) was the IgG type rabbit polyclonal antibody. It was purchased from Abcam (Cambridge, UK). Slide glasses were incubated with the primary antibodies at an optimized titer and diluted using Universal blocking reagent (BioGenex, Fremont, CA, USA) for 60 min. The secondary antibodies used were goat antirabbit IgG-HRP according to the manufacturer’s instructions. Two pathologists analyzed the expression of each gene independently, and scored the intensity of expression as 0 (no expression), 1 (weak expression), 2 (moderate expression), or 3 (strong expression). They also scored the distribution of expression as 0 (none), 1 (1-50% of tumor cells), or 2 (50-100% of tumor cells).

For the proliferation assay, cell lines were grown in 96 well plates at a density of 1×104 cells per well. Measurements were made in triplicate for each of the cell lines by using MTT Assay Kit (Roche Diagnostics, Indianapolis, IN, USA). We evaluated 3 days after transfection.

Production of the polymeric CTC-chip and antibody coating of the chip surface were carried out as described previously [10]. The microstructure of the chip consisted chiefly of an array of two different types of micro posts and the gap between microposts was enlarged to 200 μm in the area around the chip inlet.

Each mRNA expression level was normalized to that of the reference gene GAPDH. The primer sequences are shown in Table 1. The expression level of each mRNA molecule was evaluated using the ΔΔCt method.

Treatment with eribulin. Eribulin mesilate was chemically synthesised at Eisai Co., Ltd (Tsukuba, Japan). 1×106 of siKLF4 transfected cells were treated with 0.25 nM of eribulin for 24 hr followed by extracting the mRNA, as described before.

The student’s t-test and chi-square test were used to compare clinicopathological data. The overall survival (OS) rate and the diseasefree survival (DFS) rate after surgery were calculated for each group by the Kaplan–Maier method, and differences were assessed by the logrank test. The Cox hazard regression model was used for multivariate analysis. AP value less than 0.05 were assumed to indicate significance. All analyses were done with JMP11.0 software.

Table 2: Expression of KLF4 in each characteristics. Upper and lower expression groups are defined in Sect. “Immunohistochemical staining and analysis”. p-value is represented by X2 analysis, * Value of p<0.05. 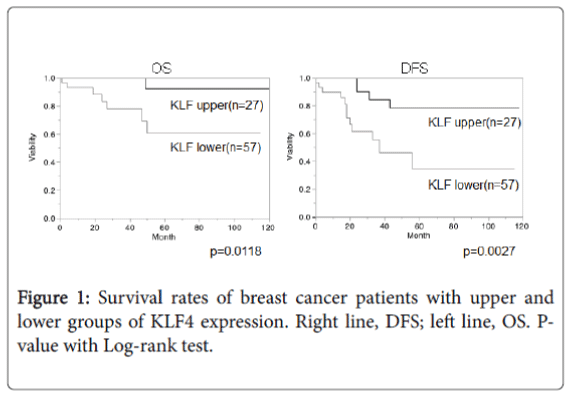 KLF4 expressions in CTCs from a TNBC patient

Usually, KLF4 was well expressed in nuclei and cytoplasm of TNBC cells in primary breast tumor. We captured some CTCs from the peripheral blood of a TNBC patient by the polymeric CTC-chip (Figure 2a). An analysis of KLF4 expression in CTCs of the TNBC patient showed that KLF4 expression was lower in CTCs than in cancer cells in primary lesions (Figure 2b). At the same time, the expression of the epitherial cell marker, E-cadherin was also weak in CTC than primary breast cancer cells. Figure 2: Detection of CTC cells, and comparison of the expression of KLF4 and E-cadherin. (a) Detected cells by polymeric CTC-chip were immunostained with anti-EpiCAM and anti-CK18 mAb. Double positive cell is confirmed as a CTC cell. (b) The specimen of resected breast tumor and CTCs in the peripheral blood of the same patient was immunostained with anti-KLF4 and anti-E-cadherin mAb.

Suppression of KLF4 in TNBC cells

To examine whether KLF4 may have a role in tumor growth and metastasis in TNBC cells, we induced the siRNA against human klf4 (siKLF4). Induction of siKLF4 upregulated the speed of cell growth and the cell volume in MDA-MB-231 cells (Figure 3a). The MTT assay also demonstrated that siKLF4 transfected MDA-MB-231 cells exhibited increased cell growth as compared to control cells (Figure 3b). Then, the qPCR assay was performed with the mRNA from these siKLF4 transfected MDA-MB-231 cells. The result showed the downregulation of KLF4, p63, p75 and Ecadherin, and the upregulation of NANOG, dck, Bmi1, CK13, Ncadherin, Snail1, Snail2, Vimentin, Zeb1 and Zeb2 (Figures 4a and 4b). Eribulin is reported to suppress the growth and EMT of breast cancer cells [12], and siKLF4 transfected MDA-MB-231 cells were treated with eriburlin to elucidate the KLF4 role for the growth and EMT of TNBC. The result showed the decrease of dck, Bmi1, CK13, and all of EMT-markers; N-cadherin, Snail1, Snail2, Vimentin, Zeb1 and Zeb2 significantly. On the other hand, p63, p75 and E-cadherin were increased. These results showed that the KLF4 had a tendency to inhibit the cell growth and the EMT of TNBC. In this report, we investigate the relationship between KLF4 and life expectancy in TNBC cases based on clinical data. Eighty-four TNBC cases were performed operations of breast cancers resection at 5 hospitals of TUBRG. All slide glasses of resected tumor specimen were immunostained with anti-KLF4 Ab. The result indicates that axillar lymph node metastasis is significantly increased in KLF4 lower group. It is also shown that OS and DFS are significantly lower in the KLF4 low expression group than in the KLF4 high expression group. These results suggest that the expression of KLF4 inhibit the lymph node metastasis and tumor progression of TNBC cells.

In order to confirm it, we detect CTCs in the peripheral blood of TNBC patient. It is reported that CD44hiCD24lo/- type breast cancer cells, which are supposed to be breast cancer stem cells (CSCs), are abundant in CTC of TNBC cases, resulting in metastasis and relapse at high frequencies [13]. It is believed that epithelial-mesenchymal transition (EMT) endows cancer cells with migratory and invasive properties, and induces cancer stem cell (CSC) properties [14]. The primary events of an EMT are the loss of epithelial markers, such as Ecadherin, followed by increased expression of mesenchymal markers, and rearrangement of the cytoskeleton. Consequently, CSCs have a lose polarity and develop a mesenchymal phenotype, acquire motility and metastatic capacity [15]. In this report, we detected CTCs by polymeric CTC-chip that we developed [16], and ascertained by modified Giemsa staining and immunostained with anti-EPICAM and anti-CK18 mAbs. After that, CTCs were immunostained with the anti- KLF4 mAb or the E-cadherin mAb which is the epitherial cell marker. The results show that both expression of KLF4 and E-cadherin are decreased in CTCs than cancer cells in primary tumors. From these data, it is suggested that there are some relationship between the disappearance of KLF4 and EMT causing CTC.

Deletion of KLf4 in breast cancer cells induces EMT-like morphological changes, and forced expression KLf4 promotes Ecadherin expression, thereby suppressing EMT-like changes [17]. Tiwari et al. reported that suppressing KLf4 in breast cancer cells induces Jnk1 (Mapk8)-mediated EMT [18]. It is also reported that cell invasion and migration ability were reinforced when siRNA against kLf4 (siKLF4) was transfected in TNBC cell line MDA-MB-231 [9]. In this report, the cell growth ability of siKLF4 transfected TNBC cells is upregulated, and the cell volume seems to be enlarged. mRNAs of cell growth marker such as dck, CSC marker; Nanog and Bmi1, and EMT markers; N-cadherin, Snail1, Snail2, Vimentin, Zeb1 and Zeb2, are increased respectively. P63 is known to be a member of p53 related metastasis suppressor gene family [19,20], and p75 is reported as a stress response protein that promotes cell survival in the presence of environmental stressors such as chemotherapy, radiation, heat, and serum starvation [21-24]. In siKLF4 transfected TNBC cells, p63 and p75 mRNAs are decreased, but after the anti-cancer agent; eribulin treatment, their expressions are obviously increased (Figures 4a and 4b). These results suggested that KLF4 might have ability to add a stress to cancer cells, inhibit the malignant transformation of TNBC, the conversion to CSCs by EMT and promotion of the metastasis and relapse of breast cancer.

We acknowledged to Dr. Kazuhiro Tsukada died at 5/ Mar/ 2016, for giving us a lot of helpful suggestions about this work. This work was partly supported by JSPS KAKENHI Grant Number 15K10181.

All authors declare that there are no conflicts of interests.

Copyright: ©2016 Nagata T, et al. This is an open-access article distributed under the terms of the Creative Commons Attribution License, which permits unrestricted use, distribution, and reproduction in any medium, provided the original author and source are credited.