Pleomorphic Lobular Carcinoma of the Breast: A Review of 35 Cases at a Single Institution

Copyright: © 2016 Sandra SH, et al. This is an open-access article distributed under the terms of the Creative Commons Attribution License, which permits unrestricted use, distribution, and reproduction in any medium, provided the original author and source are credited

Methods: From 1993-2010 we retrospectively reviewed 198 cases of invasive lobular carcinomas, 35 cases (34 patients with one patient presenting with 2 independent cancers) of PL and 163 cases of non-pleomorphic invasive lobular carcinoma (NPL). The pathology was reviewed by a single breast pathologist and classified as either PL or NPL according to WHO classification. Kaplan-Meier survivals were computed and compared with a log rank test using SPSS 18. Overall survival (OS) was computed from date of diagnosis. Progression free survival (PFS) until either local or metastatic failure was computed.

Conclusions: PL patients showed a statistically significant decreased OS, but no significant difference in PFS, at 5 years from diagnosis.

The majority of breast malignancies arise from epithelial components. These are classified as carcinomas however have a wide range of microscopic appearances and biologic and clinical behavior. These invasive carcinomas are further classified by morphological subtype. Li et al. reported the sub-classification percentages from a population based review using the Surveillance Epidemiology and End Results (SEER) database of 135,157 women of the National Cancer Institute (NCI) from 1992 to 2001 [1]. Invasive ductal comprised 76%, invasive lobular 8% and mixed ductal and lobular 7% of the histologic subtypes.

Pleomorphic lobular is a very rare variant of lobular cancer with limited available clinical data. It is estimated that it represents less than 1% of all breast cancer histologies [2]. The 4th edition of the World Health Organization’s (WHO) classification of breast tumors defines the subtypes of invasive lobular as classic, solid, tubulolobular, alveolar and pleomorphic [2]. This division is based predominately on architecture for all but the pleomorphic type, which is based on nuclear morphology. In addition, pleomorphic subtype is further divided into signet-ring cell, histiocytic, and apocrine [2]. The name of pleomorphic is reflective of the increased nuclear size, pleomorphism and high mitotic rate observed with this cell type [3].

There are several features of pleomorphic lobular that are more prevalent than non-pleomorphic lobular cancer which may influence the perceived clinical aggressiveness of this subtype including a higher expression of p53 in addition to Her 2 neu amplification [4,5].

Classic invasive lobular cancers express p53 in 5% or less of cases reported whereas pleomorphic lobular cancers have a higher expression ranging from 10% to 45% [4,5]. The p53 signaling pathway when activated contributes to tumor suppression [6]. Mutations of p53 lead to loss or altered function and are a common feature in the majority of human cancers. Mutant p53 has also been demonstrated to acquire oncogenic functions such as tumor promotion. Mutant p53 cancers have demonstrated an increase in metastases and genomic instability [6]. Pleomorphic lobular tumors expression of p53 may provide one explanation for the aggressive behavior of this cell type over classic lobular carcinoma [7].

The concept of Her 2 neu association with lobular cancer is relatively new in investigation and dependent upon method of detection leading to variability. When considering the literature of studies reporting Her 2 neu status approximately one-fourth of pleomorphic cancers will express Her 2 neu amplification. In general, the pleomorphic lobular cancers are more likely than classic lobular to express amplified Her 2 neu [7].

Likewise differences in estrogen and progesterone receptor expression have been reported. Classic lobular will have measurable ER and PR expressions in 80% to 95% of cases whereas reports of invasive pleomorphic lobular have ranged from no expression to 93% [7].

This study evaluated the clinicopathological characteristics of pleomorphic lobular and prognosis compared with classic invasive lobular carcinoma within a single institution.

This retrospective review was approved by the institutional review board at the University of Texas Medical Branch at Galveston. A total of 198 consecutive cases of lobular cancer from 1993 to 2010 were reviewed by a single breast pathologist and classified as invasive lobular (or non-pleomorphic, NPL) versus pleomorphic lobular (PL). Of the total of 198 lobular cancers, 35 were PL and the balance of the 163 cases were non-pleomorphic invasive lobular. Clinical outcome data were retrieved from the patients’ medical record and supplemented by the Cancer Registry. We specifically recovered data in reference to clinical and pathologic stage; date of diagnosis; type of surgical treatment; chemotherapy (neoadjuvant or adjuvant), postsurgical radiation; endocrine therapy; recurrence, metastases and death in addition to last follow up. Data also included ER, PR, Her 2 neu, and ki-67 status at initial diagnosis.

Kaplan-Meier survivals were computed and compared with a log rank test using SPSS 18 (for Windows). Overall survival was computed from date of diagnosis to last date of review (2/1/11). Categorical data were tabulated using frequencies and percentages and then compared using χ2 analyses. Continuous data were evaluated as mean or as median. Time to recurrence, metastasis or death was calculated from date of diagnosis.

For the NPL group, 151 had surgical management with 87 (57.6%) having mastectomy and 64 (42.3%) a partial mastectomy. All 151 had assessment of the axilla by either sentinel node excision or axillary lymph node dissection. Of the PL group 29 patients underwent surgical management with 16 (55.2%) having mastectomy and 13 (44.8%) breast conserving surgery. All but one patient had surgical assessment or clearance of the axilla.

The chemotherapy varied not only by the drug regimen but also by delivery as preoperative or postoperative. Those known to have Her 2 neu amplification received chemotherapy along with Trastuzumab. Chemotherapy was administered to 79 (48.5%) NPL patients and 19 ((54.3%) PL patients.

The choice of endocrine therapy was at the discretion of the treating medical oncologist. 140(85.8%) NPL and 27 (77%) PL patients received endocrine treatment.

The dominant sites of metastatic disease both at presentation and subsequent metastases for NPL and PL were primarily to serosal surfaces of bowel, peritoneum, organs of the gynecologic tract, pleural surfaces, and meninges.

The 5 year overall survival was significant (p=0.031) with a clear difference in survival noted over the first 5 years from diagnosis as demonstrated in Figure 1. While the curves for 5 Year progression free survival in Figure 2 show separation during the first 5 years from diagnosis, the difference in outcome did not reach significance (p=0.73). It is noted that the NPL group had a sharp downturn at 5 years perhaps accounting for this phenomenon. 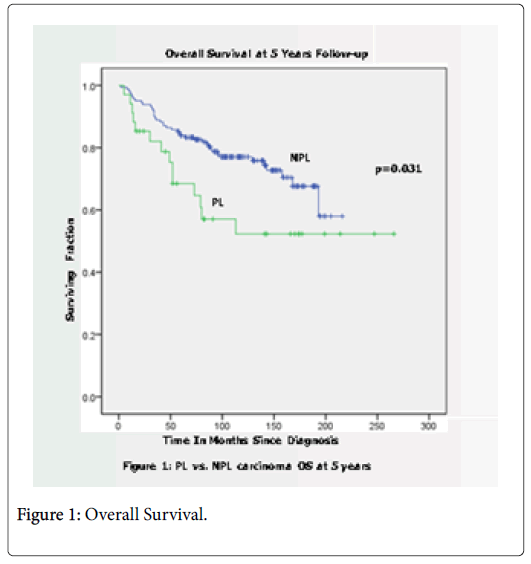 Of the published comparative work evaluating the patient population of pleomorphic lobular cancers, the general consensus is that the cell variant is associated with older age and postmenopausal status at diagnosis [8,9]. In our patient pleomorphic cohort the age range was younger and had a slightly higher representation of premenopausal women.

At UTMB, we have previously investigated the role of p53 and p16 as modifiers of HERV-K in invasive pleomorphic lobular carcinoma and classic lobular carcinoma of breast. Since the pleomorphic variant is characterized by larger cells with abnormal ploidy and increased mitotic activity, it is assumed that the abnormal ploidy is linked with poor disease prognosis. HERV-K has been shown to mediate the formation of cellular polyploidy [10]. In the environment of oncogenic and epigenetic changes in the tumor cells, abnormal ploidy cells may survive and proliferate, resulting in evolution and selection of aggressive clones of cells, leading to tumor progression. We hypothesized that HERV-K is a driver for aneuploidy in this cancer cell variant and the outcome of abnormal ploidy is modified by cell cycle checkpoint proteins. We therefore examined the expression of HERVK in pleomorphic lobular and classic lobular tumors and correlated HERV-K activation with the cellular ploidy and the status of cell cycle checkpoint proteins p53 and p16. Forty formalin-fixed, paraffinembedded specimens from the archives at UTMB were included in this analysis. The samples included 17 of the 35 pleomorphic lobular cases and 23 non-pleomorphic lobular specimens included in this study cohort. Each case was stained for HERV-K, p53, p16, Ki67, HER2/ ERBB2, and E-cadherin. The staining was reviewed and scored by two pathologists. The Ki67, HER2/ERBB2 staining was scored based on the CAP guidelines. The staining of HERV-K, p53, p16 and E-cadherin was dichotomized as negative (<10% of tumor cells staining positively) and positive (>10% of tumor cells staining positively). We found HERV-K to stain positive in both PL (65%) and NPL (43%) specimens. Also p53, p16, and Ki67 all showed higher positive rates in the PL than NPL tumors. Our results supported HERV-K activation in breast cancer cells and the notion that the status of p53 modifies the outcome of HERV-K positive cells. However, further detailed analyses are necessary to determine whether p53 positive cases harbor TP53 mutation [11].

Because invasive pleomorphic lobular cancer represents a very rare subtype of lobular cancer it remains problematic to understand and interpret clinical behavior, associated prognosis and to develop treatment strategies. In fact the World Health Organization (WHO) did not recognize pleomorphic lobular cancer as a variant of lobular cancer until 2003 [12]. Controversy exists regarding its propensity to present at higher stage, estrogen poor, and Her 2 neu amplified. In fact, Narenda, et al. make the case that pleomorphic lobular cancer is not an aggressive variant of lobular based on their case-control study comparing the two cell types [13]. These authors propose that the pleomorphic carcinoma’s behavior is related to its tumor size, stage, and lymph node involvement at presentation as would be the case of any other breast cancer cell type. However, reported clinical outcome studies have demonstrated growing evidence for a poor prognosis with shorter overall survival but all are plagued with small sample size [4,5,12,14].

Although the outcome of our patient population reaffirms differences between the two groups the etiology of the perceived aggressiveness of this phenotype remains undetermined. This work contributes to the low collective evolving database for this rare tumor.