4 Department of Haematology and Blood Transfusion, College of Medicine of the University of Lagos, Idi-Araba, Lagos, Nigeria

Copyright: © 2014 Sarah OA, et al. This is an open-access article distributed under the terms of the Creative Commons Attribution License, which permits unrestricted use, distribution, and reproduction in any medium, provided the original author and source are credited.

Background: Timely PEP after needle stick exposure to high risk body fluids can reduce the rate of occupational transmission significantly. Ignorance of this may increase the risk of seroconversion to HIV for healthcare workers. This study was conducted with the aim of demonstrating the current level of knowledge of healthcare workers as regards PEP. Methods: This was a cross-sectional study, pretested questionnaire were self-administered to 372 health workers from various clinical specialties. The responses were collated and analysed; results were presented in frequency tables. Result: This study revealed a high level of awareness among the respondents as 83.3% were aware of PEP. Despite the high level of awareness, respondents still have an inadequate knowledge about PEP, only 32% of the respondents could name at least two of the recommended drugs for PEP, only 54.0% of respondents knew when to commence PEP following occupational exposure to HIV. There was a low level of practice of PEP among the respondents as only 6.3% of respondents had PEP despite occurrence of needle stick injury. Conclusion: This study revealed a general low level use of PEP despite the average knowledge of PEP and the favourable attitude towards HIV PEP amongst the respondents.

The HIV/AIDS pandemic marks a severe developmental crisis in Africa which remains by far the most affected region in the world. With the very high prevalence of sharps injuries, low rate of reporting and use of Post exposure prophylaxis (PEP), the expected national incidence may be seriously underestimated. Prevention of exposure remains the most effective measure to reduce the risk of HIV transmission to health workers but timely PEP, after needle stick exposure to high risk body fluids can reduce the rate of occupational transmission significantly. Guidance on how to deal with incidents of exposure to potentially infectious material has been recommended by Centers for Disease Control of U.S.A. for those workers thought to be exposed to blood borne viruses especially HIV which causes the highest level of anxiety amongst health workers [1].

Percutaneous injury, usually inflicted by a hollow-bore needle, is the most common mechanism of occupational HIV transmission. The CDC estimates that more than 380,000 needle stick injuries occur in hospitals each year; approximately 61% of these injuries are caused by hollow bore devices [2]. The World Health Report 2002 estimates that 2.5% of HIV cases among health care workers worldwide are the result of occupational exposure [2]. Most people at risk of occupational exposures are in developing countries where there is a paucity of standard reporting protocols [3]. The distribution of exposures to blood borne pathogens among different cadre of Health Care Workers (HCWs) is an important variable in implementing preventive measure. Some studies have indicated that exposures to blood-borne infections in healthcare settings are most frequent with nurses than other HCWs. In a study carried out among health care workers in England, Wales and Northern Ireland between July 1997 and June 2000, it was discovered that midwives were the most common group exposed to blood borne viruses followed by doctors [4]. A similar study in Brazil found the same distributions of exposures [5]. In most studies percutaneous exposure is the most common route of exposure.

Post exposure prophylaxis (PEP) is just what the name suggests; PEP is any prophylactic (preventive) treatment started immediately after exposure to a pathogen (such as a disease causing virus) in order to prevent infection by the pathogen and the development of diseases [1]. In the case of HIV infection, PEP is short term antiretroviral treatment given to reduce the likelihood of HIV infection after potential exposure either occupationally or through sexual intercourse. Within the health sector, PEP should be provided as part of a comprehensive universal precaution package that reduces staff exposure to infectious hazards at work. The introduction of an occupational exposure program has many benefits, including optimal management of injuries and acquisition of data on infection control measures and may protect health care institutions from false claims for compensation [6]. This research study was conducted primarily to determine the current level of knowledge, assess changing attitudes to, and determine the level of practice of PEP among medical and nursing personnel using Lagos University Teaching Hospital (LUTH) as a case study.

was conducted primarily to determine the current level of knowledge, assess changing attitudes to, and determine the level of practice of PEP among medical and nursing personnel using Lagos University Teaching Hospital (LUTH) as a case study.

The study population included medical and nursing personnel working in clinical departments with the possibility of occupational exposure to blood borne viruses. Other supporting healthcare personnel in the hospital were excluded.

Data was analysed using the Epi-Info Statistical Package -Version 6. The results were presented in frequency tables. 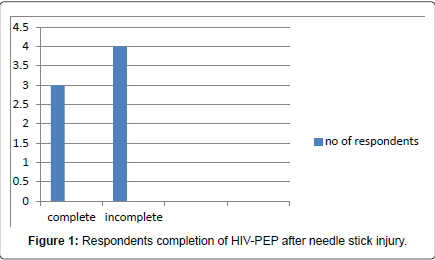 Of great significance is the low level of use of PEP, although the respondents displayed good acceptance of PEP but only 6.3% of respondents who had needle stick injury accepted to use PEP This is not unexpected bearing in mind that majority of the needle stick injury was never reported. Similarly, in a study done by Russi et al., only 13% of the health care workers who reported needle stick injury elected to receive prophylaxis [7]. Also noteworthy is the fact that even out of those that agreed to use PEP, only 4 respondents completed the recommended duration for the use of PEP. The major reason for non-adherence was the unpleasant side effects of the drugs. It is no secret that HIV medication has some unpleasant side effects Because of these side effects the people who have been exposed find it difficult to take their PEP regimen as prescribed and/or complete the four week course. These result in poor adherence and as in the case of HIV infection, poor adherence leads to viral resistance and poor control of HIV. HCWs need to be assured that most symptoms are not serious can be managed. That could make the difference between the PEP being successful or not [1].

Respondents in this study have good knowledge of HIV PEP and have a positive attitude towards it but there were disparities in their practices of use of the recommended drugs.

A system that includes written protocols for prompt reporting of occupational exposure, evaluation, counseling, treatment and follow-up should be made available to all health care workers. Health care workers should have access to clinicians who can provide post exposure care during all working hours, including nights and weekends. Antiretroviral agents for PEP should be readily available for timely administration.