Colorectal carcinoma (CRC) is a major cause for morbidity and mortality globally [1]. CRC is related to genetic and environmental factors. Epidemiological studies suggested obesity, diabetes mellitus, smoking, alcohol intake, and dietary habits as environmental factors contributing to CRC [2]. Low fibre diet and increased consumption of fatty acids are proposed the most contributing factors. The main source of branching fatty acids in humans is red meat and dairy products [3-5] Prolonged meat and fatty meals consumption increases the risk of incidence of CRC to 20-30% and is also linked to an increased incidence of mortality in CRC patients [3]. Some reports suggested that fatty acid may promote human carcinogenesis through stimulation of colonic cell proliferation or through genetic mutations that may affects enzymes responsible for detoxification of harmful metabolites resulting from its consumption [4,5].

AMACR (Alfa-Methylacyl-CoA Racemse) was identified in rat liver as mitochondrial and peroxisomal enzyme. It catalyses a key step in the metabolism of fatty acids and fatty acid derivatives via conversion of (2R) fatty acids into their S-stereoisomers, which can be further metabolised and degraded in order to produce energy. An increase in utilisation of energy from fat is the hallmark of many cancer cells [6,7]. AMACR immunostaining was detected in normal hepatocytes, epithelial cells of renal tubules, bronchial epithelium, salivary glands and gall bladder, whereas, it was absent in normal epithelium of prostate, lung, colon, skin, ovary and endometrium [8,9]. Severe reduction of AMACR activity is associated with neurological disorder due to accumulation of R-2-methyl fatty acids [10]. On the other hand, the consistent overexpression of AMACR in high grade intraepithelial neoplasia of prostate and primary and metastasising prostatic carcinoma pointed to its role in the biology of prostatic cancer [11-14]. Further studies revealed AMACR is overexpressed in other organ cancers as colon [15,16], liver [17], lung [18], bladder [19], lymphoma [20], renal cell carcinoma [21], and melanoma [22]. AMACR is rarely expressed in gastric [23], ovarian [24], and breast [25] carcinomas.

Despite the above promising data, there is still limited information about the relation of AMACR immune-staining to clinic-pathological variables and prognostic parameters of CRC. Exploration of characteristic AMACR immunostaining may add to understanding of mechanisms by which diet affects cancer colon development and may afford new insights into cancer prognosis, and therapy. The aim of the present study is to analyse AMACR immunostaining in normal, dysplastic and malignant colorectal tissues, and to explore significance of immunostaining in relation to clinic-pathological variables and free survival period.

The material of the present study represent paraffin blocks from 38 normal colonic mucosa, 40 colorectal adenoma, 196 colorectal carcinoma cases and 49 lymph nodes with metastatic CRC. Paraffin blocks were retrieved from database of the Department of Pathology, King Abdulaziz University from 1995 to 2010. Patients’ clinical information, follow up data and treatment outcome data were collected from hospital patients records. The following Clinicopathological parameters for CR adenomas and CRC cases were used; age, sex, tumour site and size, histological type and grade, stage at time of diagnosis (following the AJCC staging system) [26], margins of excision, and the presence of distant metastasis. Details of clinicpathological findings are listed (Table 1).

Paraffin blocks were sliced and stained routinely with haematoxylin and eosin to review histopathological characteristics of cases as histological type and grade, presence of lymph-vascular and perineural invasion, status of surgical margins, as well lymph node status. Using an automated microarrayer (Master 3D Histech) [27], two replicate tissue cores (1.5 mm each) were sampled and inserted into tissue microarray blocks. Blocks were sliced into 4 micron meter sections, embedded in sialinated slides in order to be stained by immunohistochemical staining. Immunostaining of AMACR was performed using Avidin-Biotin procedure following manufacturer’s kit instructions. Sections were stained immunohistochemically with primary antibody (mouse polyclonal antihuman AMACR antibody, 1:200 dilutions, Dako cytomation, Norden, Glostrup, Denmark) using automated immune-stainer (Ventana, Benchmark-XT). For each test, positive controls were selected from malignant prostatic tissue previously known to stain for AMACR, and as negative control we replaced primary antibody by Tris buffered saline. Immunohistochemical stain was evaluated semi-quantitatively by two separate expert pathologists (EE and WG) by counting the extent (%) of staining of AMACR in cells. The extent Immunostaining was scored as follows; negative when positivity is found in less than 10% of cells, low immunostaining (10-15% positivity), and high immunostaining when positivity is detected in more than 50% of cells.

n = number of cases falling in each category; *One sample nonparametric chi-square test

AMACR was downregulated in primary tumours (p< 0.001) and in nodal metastasis (p< 0.001). However, in adenoma there was no difference between low and high immunostaining (Figure 1). There was no statistically significant difference between AMACR immunostaining in primary CRC in relation to normal colonic mucosa, adenoma, and nodal metastasis (Table 3).

Low AMACR immune-staining in CRC is associated with the occurrence of lymph node metastasis and distant metastasis. However, there was no significant association between AMACR immunostaining and age, sex, degree of differentiation, depth of tumour invasion, stage,lymph-vascular invasion, and status of surgical resection margins (Table 4). 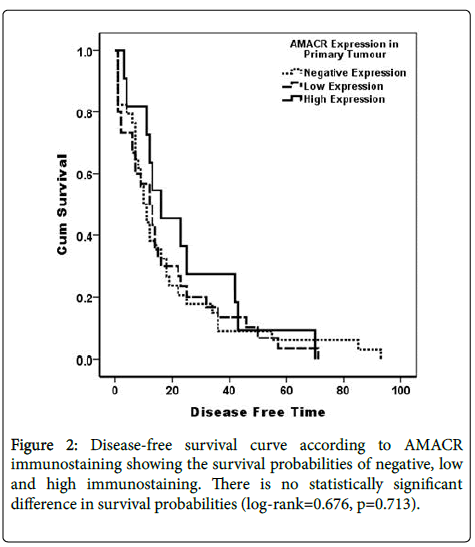 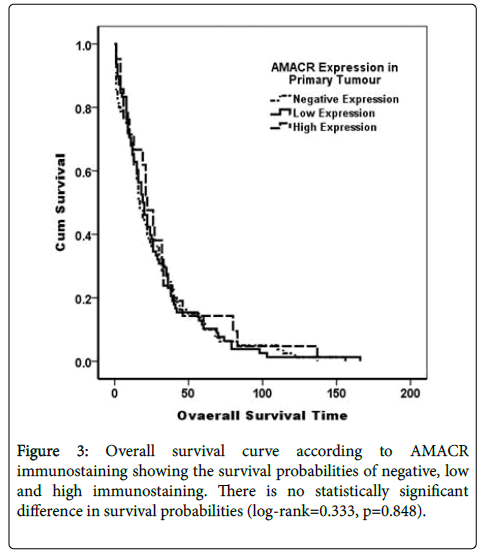 The biological role of AMACR overexpression is proved in carcinogenesis of many organ systems most probably due to its relation to beta-oxidation of branching fatty acids [7]. The greatest expression of AMACR was reported in prostatic and colonic carcinoma accounting for 92% and 83% respectively [11,15]. Nowadays, AMACR overexpression is considered a promising biomarker to distinguish normal prostate from malignant tissue particularly in ambiguous needle prostatic biopsies and even in blood samples [11,28]. The differential expression of AMACR in some malignancies rather than others, make it useful diagnostic tool in contrasting carcinoma originating from various primaries as colon, ovary and breast [29], and endometrial carcinomas [30]. Recently, attention was paid to AMACR as biomarker in preneoplastic conditions in many organs. Many studies reported significant correlation between AMACR expression and degree of dysplasia in preneoplastic conditions of gastrointestinal tract as Barrett’s esophagus and inflammatory bowel disease and suggested AMACR as additional risk factor in colorectal preneoplastic conditions and considered it as candidate adjunct marker for further evaluation regarding risk stratification of patients undergoing colonoscopy surveillance [31-34].

Despite these promising data about value of AMACR as diagnostic and prognostic adjunct in surgical pathology, there are limited reports about the relation of AMACR immune-staining to clinic-pathological variables and prognostic parameters of colonic malignancies. In the present study, we analysed immunohistochemical expression of AMACR in normal colonic mucosa, colorectal adenomas, CRC and metastatic CRC to lymph nodes. None of normal colonic mucosae showed positive immunoreactions to AMACR except for occasional positivity in cytoplasm of some surface epithelial cells which were considered as negative staining. AMACR immune-positivity was noted in colorectal adenomas, but no significant correlation was found between its immune-staining and any clinic-pathological variables or degree of dysplasia. Our results are comparable to those of Went et al [37] who did not find any significant correlation between AMACR expression and clinic-pathological features of colorectal adenomas. On the other hand, Lakis [16] and Starter [34] reported that increased immunostaining of AMACR in colorectal adenomas was associated with villous pattern, adenomas larger than 1 cm in diameter, high grade dysplasia and /or carcinoma in situ, whereas adenomas with tubular features, small size and low grade dysplasia showed weak positive staining to AMACR. AMACR was expressed in 53.6% of CRC cases and in 36.8% of metastatic CRC to Lymph nodes. Our result is comparable to other investigators who reported AMACR positivity in 47 to 81% of CRC cases [38-40]. We found significant correlation between AMACR down regulation with the occurrence of lymph node metastasis and distant metastasis, but no association between AMACR immune-staining and clinic-pathological features as age, sex, degree of differentiation, depth of tumour invasion, tumour stage, lymphvascular invasion, and status of surgical resection margins. Our results are contradictory to those of Marx, et al. [39] who reported positive relation between reduced AMACR immunostaining and high tumour grade, stage and occurrence on left colon but did not find any relation to lymph node status or distant metastasis.

Copyright: © Maghrabi JA, et al. This is an open-access article distributed under the terms of the Creative Commons Attribution License, which permits unrestricted use, distribution, and reproduction in any medium, provided the original author and source are credited.