Copyright: © 2015 Lin CD, et al. This is an open-access article distributed under the terms of the Creative Commons Attribution License, which permits unrestricted use, distribution, and reproduction in any medium, provided the original author and source are credited.

Aim: We reported one case who received laparo-endoscopic single site (LESS) surgery for the left adrenal gland, left kidney, and bilateral ovarian cysts. Method: The patient was a 43 year-old female who had a left adrenal tumor, atrophic left kidney with severe hydronephrosis, and bilateral ovarian cysts. We placed a LESS device with 4 working ports through a para-umbilical wound of 3 cm in length. We concomitantly performed a left adrenalectomy, left nephroureterectomy, and bilateral partial oophrectomy with the patient lying on her right side. Results: There were no peri-operative and post-operative complications, and an extra incision was unnecessary. The patient was discharged 5 days after the operation. Discussion: LESS surgery for three concomitant operations with an un-changed position is feasible and safe. Conclusion: This is the first report of three concomitant procedures through one incision, which greatly decreases the number of wounds.

Laparo-endoscopic single site (LESS) surgery for adrenal, renal, and ovarian diseases has been reported to be feasible and safe [1-4]. When compared with open surgery or conventional laparoscopic techniques, LESS surgery provides the advantages of better cosmetic outcome, less post-operative wound pain, and faster recovery [1,5]. Simultaneous operations for two different organs or procedures through the same port have been reported in some situations such as bilateral adrenalectomy [6], concomitant ovarian cystectomy and cholecystectomy [7], and cholecystectomy combined with hysterectomy [8]. Here we report on a woman who received LESS surgery for a left adrenal tumor, atrophic left kidney with severe hydronephrosis, and bilateral benign ovarian cystic tumors.

The patient was a 43-year-old female with an initial presentation of leg weakness. At the emergency department, her blood pressure was 189/105 mmHg, and blood potassium level was 1.6 mmol//L. She was a relatively healthy woman with neither previous systemic diseases nor any history of major operations. Her BMI was 22.4 (159 cm, 56.7 kg) and her body image was relatively slim. According to the patient, her only surgical experience was an operation for an ectopic pregnancy about 20 years ago.

A renal ultrasound showed severe left hydronephrosis and a suspected left adrenal tumor. We arranged an abdominal computed tomography scan (Figure 1) which revealed [1]. Left adrenal tumor of 2.1 cm in diameter [2] left hydroureter and severe hydronephrosis with a very thin renal cortex, and [3] bilateral ovarian cystic tumors. An endocrine study revealed a high aldosterone/renin ratio (>100), and non-suppression of cortisol levels with a dexamethasone (2 mg) suppression test. Urinary catecholamines were normal, and an NP-59 scan revealed an evident isotope uptake at the left adrenal region. Primary hyperaldosteronism and Cushing’s syndrome were highly suspected. A DTPA diuretic renal scan reported the GFR of the left kidney was only 9.2 ml/min, and the patency of the left ureter could not be assessed because of severe hydronephrosis and poor left renal function (Figure 2). 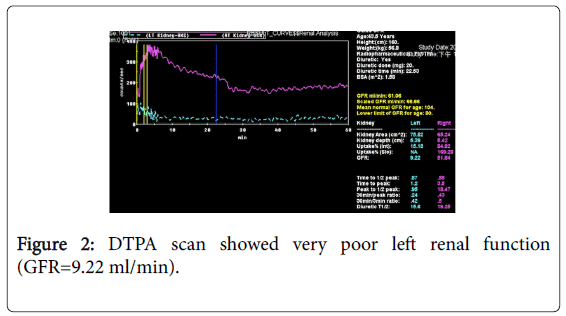 Endometrioma of bilateral ovary was highly suspected by the gynecologist according to the picture on the CT scan. After discussions with the patient, we decided to treat these diseases simultaneously with a LESS procedure.

The patient was placed lying down on her right side. She received endotracheal intubation, naso-gastric tube insertion, and urethral catheterization. A 3 cm para-umbilical incision was made, and the wound was deepened into the peritoneal cavity. The LESS device (Quadriport, Figure 3A) was placed through the wound and a 30 degree telescope of 10 mm was used. Conventional straight laparoscopic instruments were applied for the operation, and the descending colon was totally released to expose the left retroperitoneum space. The left adrenal vein was meticulously separated and transected by Ligasure, and afterward the left adrenal gland was removed. After that, the left renal pedicle was exposed, ligated by vascular clips, and transected. Dissection from the left kidney to the ureter was performed at as low a level as possible, then the left kidney and ureter were totally excised. Finally, the gynecologist applied conventional laparoscopic instruments through the same port and completed bilateral partial oophorectomy, without changing the patient’s position. A small-calibered drainage tube was placed at the left renal fossa and was penetrated from the abdominal wall through the wound for the LESS device. The specimens were entrapped in a retrieval bag and pulled out of the abdomen through the wound (Figure 3C). Later, the wound was closed in layers. The operation time was about 180 minutes for the adrenalectomy plus nephroureterectomy, and 60 minutes for the bilateral partial oophorectomy, with estimated blood loss of less than 50 ml. The patient returned to normal oral intake one day after the operation. The post-operative course was smooth and the patient was discharged 5 days later. During outpatient department followup, no more extra potassium supplement was needed, and her blood pressure became progressively normalized without anti-hypertensive agents in one year. She was satisfied with the minimal post-operative pain and excellent wound condition (Figure 3B).

Laparo-endoscopic single site (LESS) surgery for adrenal gland, kidney, and ovarian diseases has been reported to be feasible and safe since several years ago [1-4]. LESS surgery provides the advantages of better cosmesis, less post-operative wound pain, and faster recovery [1,5] when compared with open surgery or conventional laparoscopic techniques. Technical difficulties and a high learning curve are disadvantages needed to be overcome. Simultaneous operations for two organs or procedures through the same incision have been reported in the literature, such as bilateral adrenalectomy [6], concomitant ovarian cystectomy and cholecystectomy [7], and cholecystectomy combined with hysterectomy [8]. Trans-umbilical LESS adrenalectomy alone [5,9], nephroureterectomy alone [10], and enucleation for ovarian cyst enucleation alone were reported feasible and safe. However, concomitant operation for these 3 procedures has never been reported. An operation of this type is challenging because the patient’s position may make it difficult to perform gynecology surgery. Furthermore, conventional straight laparoscopic instruments might also increase the difficulties for deep pelvic surgery through a para-umbilical incision. Fortunately, the gynecologist is a well-trained LESS operator, and after spending some time becoming familiar with the orientation of the flank position, the bilateral partial oophorectomy was performed smoothly in about one hour. An additional trocar or longer/flexible instruments were unnecessary for completing these three surgeries, even though the operated scope ranged from the left upper abdomen to the deep pelvic cavity. With careful selection of the patient, i.e. low BMI or relatively smaller body size, this procedure is feasible and safe. Additionally, we designed the wound of 3 cm for specific reasons: we may encounter an issue of instruments interfering with each other when performing LESS surgery if we restrict the wound to 1-2 cm in length, and since we have to retrieve the adrenal gland and kidney, we would not have to make a small wound of less than 2 cm during the operation and then expand the wound when retrieving the resected organs.

Compared to open surgery, conventional laparoscopic techniques definitely provide advantages such as less pain, faster recovery, and better cosmetic satisfaction [11]. The advantages of recovery time and cosmetic satisfaction are not clear when conventional laparoscopic and LESS surgery are compared, although a significantly lower pain score was shown in LESS surgery [12,13].

Even within emergency laparoscopy, LESS can be a practical option, if in experienced hands. Emergent appendectomy, right or sigmoid colectomies for diverticulitis, localized abscess, and diffuse peritonitis can be managed in conventional laparoscopy and LESS method [14]. LESS manner provides excellent surgical outcomes and significant cosmetic advantages for the patients, especially female patients. LESS procedure shows benefits not only in elective general surgery, but also in emergency surgical cases.

This is the first report of LESS surgery with 3 simultaneous procedures without an additional trocar or changing the patient’s position. When compared with conventional laparoscopic techniques or open surgery, the LESS procedure provided the patient the advantages of good cosmesis, less wound pain, and faster recovery. However, this method is only feasible and provides more advantages for patients with a lower BMI, or with a relatively smaller body size. Further advantages should be evaluated with larger scale of study.