Copyright: 2014 Ikemoto K, et al. This is an open-access article distributed under the terms of the Creative Commons Attribution License, which permits unrestricted use, distribution, and reproduction in any medium, provided the original author and source are credited.

Lectins are proteins which specifically bind (or crosslink) carbohydrates. Recent studies have shown the importance of glycosylation in pathogenesis of diseases. Lectin-positive spherical deposits (SPD), 3-10 micron in diameter, have been detected in the molecular layer of dentate gyrus of hippocampus in dementia, Down’s syndrome, and schizophrenia. In schizophrenia, SPD was observed without exception, regardless of having history of pharmacotherapy. Multi-labeling histochemical methods, revealed that single strand DNA was co-localized in hippocampal SPD of schizophrenia with lectin, including GSI-B4 for galactose, and UEA-I for fucose, suggesting that SPD formation in schizophrenia is related to apoptotic process. The molecular basis of SPD formation should detailly investigated in brains with neuropsychiatric illnesses, including Alzheimer’s disease and Parkinson’s disease

Hippocampal neuropathology, as a result of pathognomonic procedures of molecular basis related to memory and cognitive disturbance, has been described in mental disorders such as schizophrenia [1]. Glycoconjugates have been implicated to play a major role in the process of cell-cell recognition of development during embryogenesis. Recently, increasing number of diseases come to be known to be caused by abnormalities in the biosynthesis of sugar chains [2]. Abnormal accumulation or deposition of the sugar chains in brains of patients with neurodegenerative diseases has been reported [3].

Lectin staining is able to reveal several kinds of carbohydraterelated depositions in addition to the conventional degenerative changes including senile plaques, neurofibrillary tangles and corpora amylacea (Table 1, Figure 1) [4]. According to an old definition, “Lectins are multivalent carbohydrate-binding proteins or glycoproteins except for enzymes and antibodies.” As a significant number of exceptions are evident now, such a narrow definition, however, seems no longer relevant. For today, “lectins are defined as proteins which specifically bind (or crosslink) carbohydrates.” The authors detected lectin-positive spherical deposits (SPD) in the molecular layer of hippocampal dentate gyrus of schizophrenia (Figures 1-3), dementia, and Down’s syndrome (Figure 4) [4]. In the present mini-review, possible nature and pathophysiological significance of lectin-positive SPD would be introduced.

Table 1: Interaction between lectins and antibodies, abbreviation, and the carbohydrate binding specificity is shown.

Lectin immunohistochemistry using various antibodies that detects carbohydrates (Table 1), combined with conventional staining methods, revealed SPD, 3-10 micron in diameter, in the molecular layer of the dentate gyrus of the hippocampal formation (Figures 1-3) from patients with Alzheimer’s disease (dementia of Alzheimer type), dementia with tangles, Down’ s syndrome and schizophrenia, and aged individuals (Figure 4) [2]. Figure 2: The hippocampal formation ( HE ). 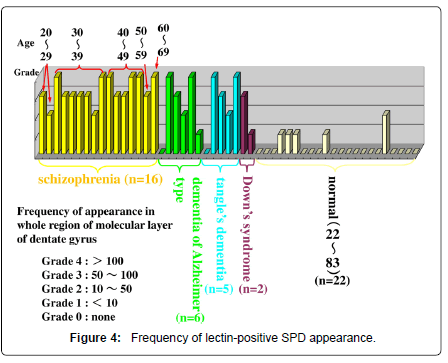 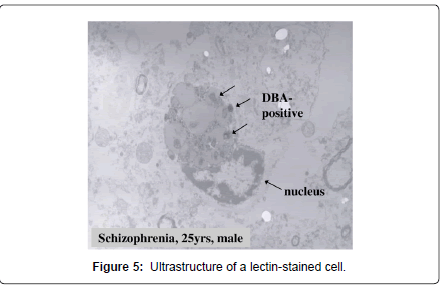 Figure 5: Ultrastructure of a lectin-stained cell. 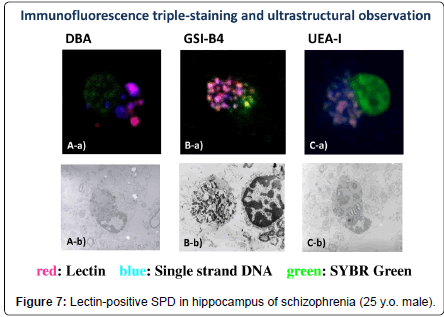 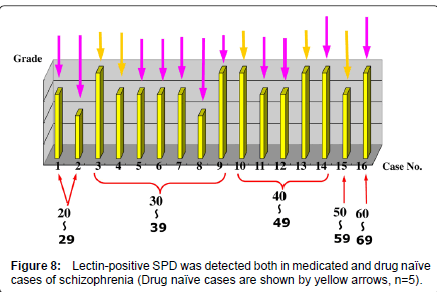 Figure 8: Lectin-positive SPD was detected both in medicated and drug naïve cases of schizophrenia (Drug naïve cases are shown by yellow arrows, n=5).

In the brains of patients with schizophrenia, the lectin-positive SPD was observed in the molecular layer of the dentate gyrus of the hippocampal formation, without exception, regardless of previous medication of antipsychotics (Figure 8). In the lectin-positive SPD, partially disrupted nucleus with decreased staining properties by mean of SYBR Green, a marker of DNA, were detected. Single strand DNA and lectin, including BSI-B4 for galactose (Figures 7B-a, 7Bb), UEA-I for fructose (Figure 7C-a, 7C-b), and DBA for N-acetyl galactosamine (Figures. 7A-a, 7A-b) were co-stained in the portion of partially disrupted nucleus (Figures 7, Table 1). In immuno-electron microscope method, lectin-positive structures were also detected in the portion of partially disrupted nucleus (Figure 5,6, 7A-b, 7B-b, 7C-b). These lectin-positive SPD might be produced in the process of apoptosis (Figures 7) [3,5]. Some experimental studies reported that a kind of therapeutic products of major tranquillizers induced neuron apoptosis [6]. However, it is unclear whether hippocampal lectinpositive SPD in non-schizophrenia cases has similar molecular basis to that in schizophrenia.

In Alzheimer’s disease, and tangle’s dementia, some cases did not contain hippocampal lectin-positive SPD, being different from schizophrenia (Figure 4). The chemical nature or formation procedures of lectin-positive SPD in dementia, as degenerative disorders, and the distinction between that in natural aging processes also remains to be investigated.

Recent studies have shown more and more importance of the involvement of altered glycosylation in pathological procedures of neuropsychiatric diseases. In the superior temporal gyrus, altered N-glycosylation of GABAA receptor has been shown in schizophrenia [7]. In our study, it should be noticed that lectin-positive SPD in the molecular layer of dentate gyrus of hippocampal formation in patients with schizophrenia is observed also in drug naïve cases, though some experimental studies showed that a kind of therapeutic products of major tranquillizers induced neuron apoptosis in the dentate gyrus. The molecular basis of lectin-positive SPD formation of schizophrenia, possibly linked with apoptotic process, and may also related to neurodevelopment should further be elucidated. The nature of lectinpositive SPD of non-schizophrenia cases, such as Parkinson’s disease, dementia, Down’s syndrome, etc. (Figure 4) should also be examined.

As novel therapeutic strategies, some pharmacodynamic studies have recently shown the usefulness of exogenous lectin for brain delivery of intranasally administered drugs of neuropsychiatric diseases such as schizophrenia [8] and Parkinson’s disease [9]. This leads us to further examine lectin pathology as well as lectin physiology to establish novel methods for diagnoses and treatment of neuropsychiatric illnesses.

To clarify the pathophysiology of degenerative disorders including Parkinson’s disease as well as Alzheimer’s disease, and to detect newly established biomarkers of neurodegeneration, the nature of lectinpositive SPD should further be analyzed.