Supramolecular assembly into tubular micro and nanostructures has been a field of much interest lately. Lipid-based microtubes are formed by self-assembly which makes the obtention of this type of structures very attractive. The fabrication process is simple and with low costs, hence they are promising micro and nanometric drug delivery systems for industrial scaling up. Molecules such as glycolipids, bola surfactants, phospholipids, and other amphiphiles, particularly molecules with chiral atoms are favoured for self-assembly. Micelles, rods, tubes and various types of related structures, can be obtained according to preparation conditions, mainly concentration, pH and temperature. Microtubes are bilayers packed from molecular association driven by non-covalent interactions such as van der Waals and electrostatic forces as well as hydrogen bonding and stacking through π-π interaction [1,2].

Biocompatible lipid-based microtubes have been investigated with promising results as drug carriers for several proteins such as bone morphogenetic protein, transforming growth factor- β, myoglobin and insulin, and plasmid DNA, both to provide slow release and to protect them from degradation. Lipid-based tubes helped to overcome short half-life and prevent aggregation of proteins. Moreover, a bioactive peptide was covalently attached to this type of material to improve its ability to bind to specific bone cells [3-6]. As water soluble compounds they can be loaded in the hollow inner part of the tubes by capillarity, a safe procedure without heat, which protects this type of active molecules.

In our experience, microtubes prepared from 12-Hydroxystearic acid (12HSA) mixed with ethanolamine in aqueous solution, as introduced by Douliez et al. [7], resulted very easy to produce and reproducible. Microtubes of various 12HSA concentrations were prepared: 0.5, 1, 2, 5, and 7.5%. This formulation was useful for loading the amphiphilic drug Amphotericin B (AmB) without the need of hazardous organic solvents, which is particularly important considering the general concerning about environmental issues and waste disposal. AmB is a polyene antifungal very useful for systemic infections but with very low solubility (1 μg/ml) at physiological pH and severe adverse effects. 12HSA molecules self-assemble to form microtubes in basic media which favoured the loading of the drug so the amount incorporated was thousand times higher than its aqueous solubility. The structure of the microtubes was not affected by the presence of AmB (Figure 1), which unlike water-soluble drugs, was incorporated within the microtube wall due to the nature of the molecule. Interestingly, the process is much simpler than other technologies proposed for encapsulating AmB such as obtaining liposomes or nanospheres. Furthermore, 12HSA microtubes can be lyophilized and so overcome stability problems. So far this formulation was considered for topical administration for the treatment of Cutaneous Leishmaniasis. 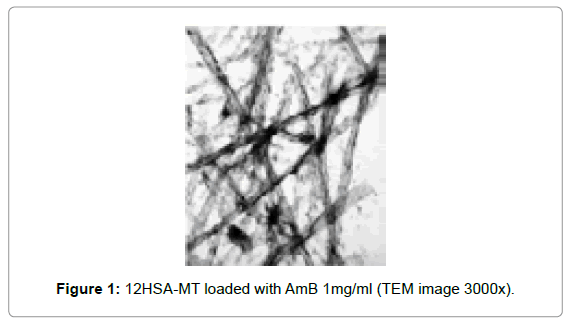 It is interesting to consider that lipid-based tubes can be tailored for loading specific drugs because constituent molecules can be functionalized to modify the surface of the microtube wall. Also, since they are made from amphiphilic molecules, structures of different size or shape can be obtained by controlled dilution of the systems, which promotes the capacity to reach different targets in the body and so control biodistribution.

Lipid-microtubes are a promising carrier both as potential strategy to allow efficacious sustained release of many bioactive agents and to protect the ones that are too labile or rapidly cleared from the administration site. Additionally, they can become scaffolds to design or optimize specific therapies such as tissue engineering and genetics, emerging multidisciplinary areas of pharmacotherapy. There is still much to further investigate about the application of self- assembled composites.

Copyright: © 2013 Salerno C, et al. This is an open-access article distributed under the terms of the Creative Commons Attribution License, which permits unrestricted use, distribution, and reproduction in any medium, provided the original author and source are credited