Long-Term Recurrent Liposarcoma of the Mediastinum with Gastric Metastasis: A Case Report

Copyright: © 2015 Yeh YS, et al. This is an open-access article distributed under the terms of the Creative Commons Attribution License, which permits unrestricted use, distribution, and reproduction in any medium, provided the original author and source are credited.

Liposarcoma is a soft tissue sarcoma typically seen in adults, and it usually arises in the limbs or retroperitoneum but rarely has a visceral location. We report here a rare case of long-term recurrent liposarcoma of the anterior mediastinum with gastric metastasis. A 55-year-old male was admitted to hospital with initial presentations of epigastralgia, anorexia, body weight loss and black stool recently. Nine years before this episode, he had received wide excision of a well-differentiated liposarcoma in the anterior mediastinum. After admission, esophagogastroduodenoscopy revealed a submucosal mass with mucosal erosion involving the great curvature of the stomach. A partial gastrectomy was performed and histopathological examination confirmed that the gastric submucosal lesion was a metastasis of the liposarcoma from mediastinum. The patient was finally diagnosed with recurrent mediastinal liposarcoma with gastric metastasis. A review of the medical literature in English till now shows that this is the first reported case of recurrent mediastinal liposarcoma with gastric metastasis.

Liposarcoma, the most common soft-tissue sarcoma, comprises 15-20% of all patients with sarcoma. It most commonly occurs in the limbs, retroperitoneum and trunk but rarely involves the viscera [1,2]. With recent advances in the molecular genetic characterization of soft tissue tumors, Enzinger and Winslow categorized soft-tissue liposarcoma into three main histogenetic subtypes, including welldifferentiated/ dedifferentiated liposarcoma, myxoid liposarcoma, pleomorphic and mixed-type [3]. 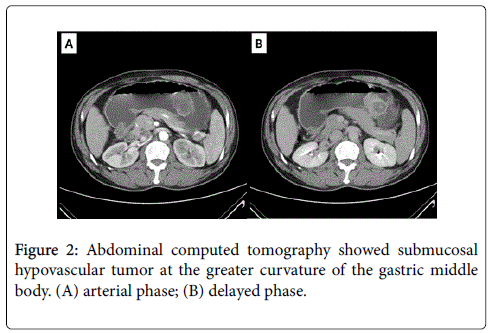 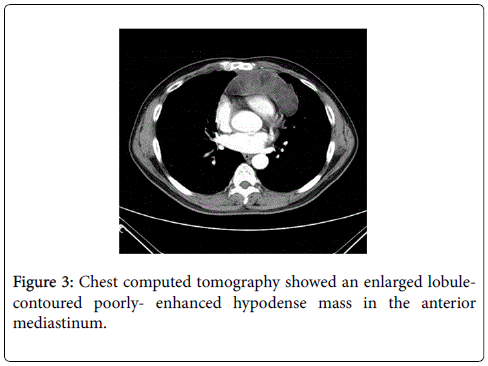 During laparotomy, a partial gastrectomy was performed to prevent tumor bleeding with achieving negative margin. An excised submucosal tumor sample (1.8 × 1.7 × 0.6 cm) appeared yellow-white intersecting the tumor tissue and was elastic in gross inspection. Histopathological findings showed a recurrent well-differentiated liposarcoma with mature adipocytic proliferation (Figure 4). There were myxoid nodules with increased cellularity but occasional mitotic count in a prominent myxoid background presenting a low grade myxofibrosarcoma-like dedifferentiated appearance. The surgical resection line was tumor-free. Immunohistochemical study showed positive for S-100 protein and these cells were distributed in the vicinity of mature fat cells. The mature fat cells and lipoblasts were positive for CDK4 staining (Figure 5) and negative for CD117, CD34, SMA, and DOG-1staining. Mediastinal location is very unusual for this disease entity, and the occurrence in the anterior and posterior mediastinum has relatively equal frequency. The age range of these patients is reported as being between 20 and 70 years with a peak in the 5th decade [6].

The anatomical location of the well-differentiated liposarcoma is the major prognostic factor. Recurrence is common in liposarcomas situated in deep anatomic sites such as the retroperitoneum and the mediastinum, where a sufficiently wide surgical excision margin is often impossible [7]. Although recurrence usually occurs within 6 months after the initial excision, cases of recurrence 5 or even 10 years later have been reported [5]. The patient we report here had a previous history of a huge tumor in the anterior mediastinum 9 years previously; after reviewing the medical history, recurrent mediastinal liposarcoma was highly suspected.

The term dedifferentiation refers to lesions that first appear as lowgrade lesions before progressing to high-grade tumors with evidence of non-lipogenic differentiation. Dedifferentiation, which is most likely a time-dependent phenomenon, occurs in 10% of well-differentiated liposarcomas, typically within 7 to 11 years after the initial diagnosis. The risk of dedifferentiation is highest in mediastinal and retroperitoneal tumors.

For the current patient, our histopathological diagnosis was recurrent well-differentiated liposarcoma in the anterior mediastinum and a metastatic stomach liposarcoma. Surgical treatment with or without intraoperative radiation therapy for resectable sarcoma is recommended [11].

Surgical margins should be defined by the pathologist. A reresection with a positive surgical margin is strongly recommended if function is not significantly affected. Adjuvant radiation therapy may be considered for a close margin from normal tissue or microscopically positive margin on nerves, major vessels or bones. Postoperative external bean radiotherapy or brachytherapy improved local control, but do not benefit overall survival. Chemotherapy has an established role in the palliative management of metastatic liposarcoma.

The response of liposarcoma to chemotherapy differs according to histological subtype and grade, which found a significant higher response rate in myxoid liposarcoma compared to all other liposarcomas. In contrast to conventional cytotoxic chemotherapies, which are non-specific, the majority of these novel therapies are based on the understanding of disease biology inherent to a given sarcoma histology, in many cases targeting a specific, aberrant genetic, or molecular pathway. For the majority of novel therapies, treatment efficacy is heavily dependent on subtype [12].

Patients who undergo complete (macroscopic) or even compartmental resection of the primary tumor have an improved prognosis with a 5-year overall survival of 54– 70% (2, 15), yet 41–50% of these patients will demonstrate locally recurrent disease within 5 years after surgery [13].

If no microscopic evidence of residual disease is observed, follow-up including physical exams with imaging (abdominal and pelvic CT scans) should be performed every 3-6 months for the initial 2-3 years and then annually.

In conclusion, recurrent mediastinal liposarcoma with gastric metastasis is very rare; attention should be paid to liposarcoma patients with upper gastrointestinal tract bleeding.

This work was supported by an Excellence for Cancer Research Center Grant through funding and the Ministry of Health and Welfare (MOHW104-TDU-B-212-124-003), Taiwan, Republic of China.