Soil properties can be altered by tillage and rotation, however, these effects cannot be detected in short-term studies. This study was conducted to assess the long-term (14 years) tillage and rotation impacts on selected soil surface properties. A long-term experimental site comprised of two tillage systems [no tillage (NT) and conventional tillage (CT)], and three crop rotations [corn (Zeamays)-soybean (Glycinemax), corn-soybean-wheat (Triticumaestivum), and corn-soybean-wheat-alfalfa (Medicagosativa)] were used for the present analysis. Surface (0-15 cm) soil samples were collected every year from 1991 through 2004 and analyzed for soil organic matter (SOM), available P, available K, and nitrate (NO3ÃÂ-N). Results indicated that SOM concentration (averaged across all years) under NT (37 g kg-1) was significantly higher compared to that of CT (36 g kg-1). However, overall crop rotation did not impact SOM. Soil P concentration under NT (208 mg kg-1) was significantly higher (8.3%) than that of CT (191 mg kg-1). Available P concentration was the highest in the 2-year-rotation, intermediate in the 3-year-rotation, and lowest in the 4-year-rotation. Tillage system did not significantly impact NO3 - concentration; nonetheless, its concentration was the highest in the 4-year-rotation followed by the 3-year-rotation, and the lowest was in the 2-year-rotation. The available K concentration under NT was not significantly different from that under CT; however, its concentration under the 2-year-rotation (340 mg kg-1) was significantly lower than those under the other two rotations. This 14-year tillage and rotation study had minimal impact on surface soil properties at this location.

Tillage and crop rotation systems impact soil organic matter (SOM) and soil nutrients; however, the impact of these systems cannot be observed in the short term experiments but rather in the long term experiments. Tillage and crop rotation impacts on soils depend on multiple factors such as soil type, cropping system, residue management, and environmental conditions [1,2]. No-tillage (NT) management can increase soil organic carbon (SOC) compared with conventional tillage [3]. Applying different crop rotations is important in recycling nutrients because plants differ in their ability of taking up nutrients from different depths, and releasing these nutrients after death and decay [4]. Increased SOM in a tillage system can be achieved via adding more organic materials to the soil, decreasing the rate of SOM decomposition, or a combination of both [5] Pulverizing soil surface via conventional tillage (CT) mixes the organic materials for the depth of plowing (25 cm depth), and increases the aeration and microbial activity, which in turn may lead to decreased SOM in the upper 15 cm of the soil [6].

Similarly, tillage and crop rotation may impact soil nutrients contents and their availability to crops. These nutrients can be added to soils in the form of fertilizers, manure, leguminous crops, or crop residues. Soil nutrients usually include N, P, and K. Nitrogen is one of the most important nutrients for the crop growth. However, when its availability exceeds plant requirements, the excess reactive N moves freely to the ground water (in the form of NO3-), or volatiles to the atmosphere (in the form of N2O), and negatively impacts the environment. For example, N is of a major environmental concern because of NO3-, which could be leached to the ground water and decrease its quality [11]. The CT system enhances SOM Therefore, innovative and holistic management practices are needed for minimizing the off-site movement of applied N. These practices include: (i) multi-purpose cover crops facilitating biological N fixation, (ii) organic farming improving soil biology diversity and soil health, and (iii) use of conservation tillage and diverse cropping systems. These alternative practices help in minimizing N and other nutrient losses from agro ecosystems, and greatly benefit the environment. Therefore, introducing these conservation practices to existing cropping systems is helpful in reducing N losses. The leached NO3- in the tile drainage was found to be smaller under NT compared with that under CT in a corn-soybean rotation [12].

Soil management systems greatly affect the distribution of K vertically and horizontally in the soil profile [13,14]. Previous studies indicated that K content in the surface layer of 3-5 cm was often higher than other depths under NT [13]. In contrast, under CT system, the distribution of K in the soil profile is relatively uniform [15]. The source of P in soils could be inorganic (e.g., fertilizers or parent materials) or organic (e.g., released P from decomposed plant residue) [16]. Immobile nutrients such as P could be concentrated at the soil surface as a result of applying NT [17]. Mineralization of SOM may significantly affect the concentration of some nutrients like P and N, but does not affect K concentration Calonego et al. [18] and Karlen et al. [19] found that there was no difference between K concentration under NT and CT system. At the soil surface, nutrients concentrations are higher but they may decrease with depth under NT; however, CT may result in a homogenous distribution of these nutrients with depth [7,13] in their work in Spain found that P and K concentrations at the soil surface (0-15 cm) were higher under NT compared with CT, which could be due to the high SOM concentration under NT as well as maintaining the applied P fertilizers. Further, crop rotation may also impact the distribution of nutrients such as P and K in the soil profile [13] The present study was conducted with the specific objective to assess the long-term (14 years) tillage and crop rotation impacts on soil organic matter and soil nutrients.

The experimental site is located at the Southeast Research Farm of the South Dakota State University South Dakota located at Clay County (43° 02’ 58” N, 96° 53’ 30” W), South Dakota (Figure 1). The experiment was initiated in 1990 to assess the impact of different tillage systems and crop rotations on the long term production and economics of cropping systems. The first growing season started in the spring of 1991. The experiment was conducted on Egan soil series (Fine-silty, mixed, superactive, mesic Udic Haplustolls) [20]. The study soil series occupies 3,931,019 acres (or 99.6% of the total area occupied by this soil series in USA), and it is nearly level with a slope of 0-1%. The daily average temperature ranges from -14.1°C in January to 31.8°C in July, and the mean annual precipitation is 627.4 mm [21].

The experimental site has 80 plots distributed randomly in a complete block design. Each plot has a width of 20 m and a length of 100 m. The experimental plots were designed to be large so that field operations could be carried out using commercial sized farm equipment. The experiment had three different tillage systems which were no till (NT), conventional till (CT), and ridge till (RT). Ridge till system had only a two year crop rotation of corn (Zea mays L.) – soybean (Glycine max. L.). In the fall of every year after harvest, residues of corn, soybean, and wheat were disked and chiseled in all of the conventionally tilled plots. The RT plots were excluded from this study because it had only one rotation system. Both NT and CT had three rotation systems, which were a two year rotation of corn-soybean, a three year rotation of corn-soybean-wheat (Triticum aestivum L.), and a four year rotation of corn-soybean-wheat-alfalfa (Medicago sativa L.) (Figure 1). 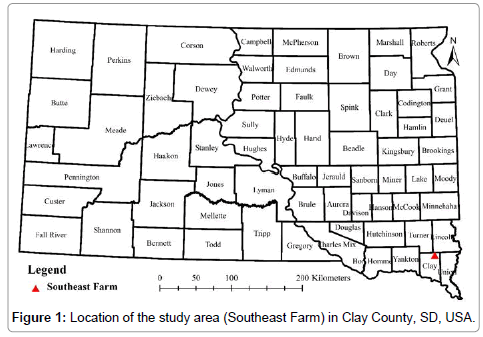 It is of importance to mention that the data we used here were collected from 1991 to 2004, but they have not been published in scientific journals. Also, not all of the soil properties were analyzed every year; that is why we selected the years that have data of the same soil properties. Soil samples were collected every fall after harvesting the crops from 1991 to 2004 from each plot. Three cores of soil samples from each plot were collected at a depth of 0-15 cm using a 3.5-cmdiameter and 50-cm-tall hand probe(Inc. JMC Soil Samplers) and mixed together to make a composite sample. Composited soil samples were labeled, sealed in plastic zip-lock bags, and transported to the laboratory. Every year, after bringing the soil samples to the laboratory, all of them were air dried, ground, and sieved to pass a 2-mm sieve. All of the analyses were carried out using the soil fine fraction (

Soil organic matter (SOM) was measured using the loss on ignition (LOI) method [22]. Briefly, 10 g of each soil sample was weighed in an aluminum crucible, transferred to a muffle at a temperature of 450-500oC for 4 h, and then the loss of weight was determined. P was extracted using a 0.5 M NaHCO3 solution and then the extraction was measured colorimetrically [23]. Nitrate was determined using a nitratespecific ion electrode [24]. Available K was extracted by 1 M NH4OAc at pH 7.0, and it was determined using an atomic absorption (AA) [25].

Soil organic matter and soil nutrients that measured in all of the tillage and crop rotation systems of each year were analyzed separately and together. An analysis of variance (ANOVA) was conducted using the SAS software (version 9.3, SAS Institute, Cary, NC, USA). An estimate for the least significant difference (Duncan’s LSD) between two tillage systems and three crop rotations were obtained using the ‘GLIMMIX procedure’ in SAS. Statistical differences were declared significant at the α = 0.05 level. 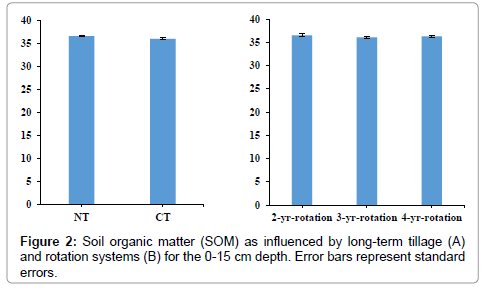 Table 3: Soil available phosphorus (P) concentration as impacted by no tillage vs conventional tillage under three rotation systems at the soil surface (0-15 cm). 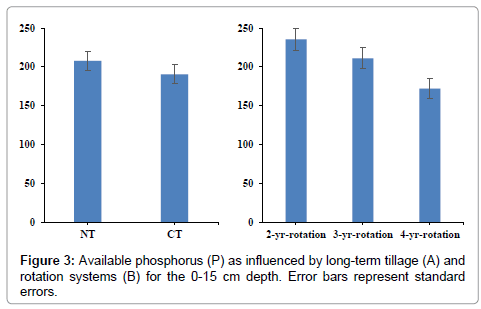 Figure 3: Available phosphorus (P) as influenced by long-term tillage (A) and rotation systems (B) for the 0-15 cm depth. Error bars represent standard errors.

Table 4: Soil available phosphorus (P) concentrations as impacted by crop rotations under no tillage and conventional tillage at the soil surface layer (0-15 cm).

Tillage and crop rotations impacts on soil nitrate (NO3- -N)

Table 5: Soil nitrate (NO3-) Concentration differences between no tillage and conventional tillage under three rotation systems for the soil surface layer (0-15 cm). 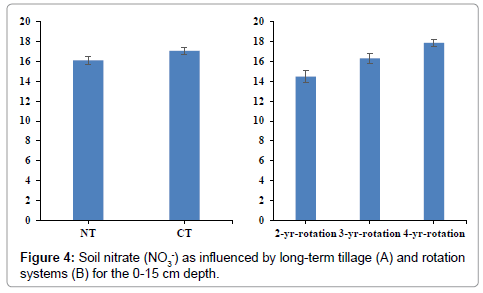 Table 6: Soil nitrate (NO3-) concentrations as impacted by crop rotations under no tillage and conventional tillage at the soil surface layer (0-15 cm). 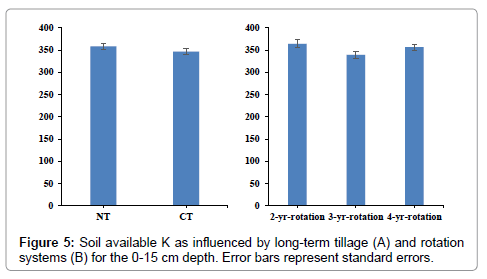 Figure 5: Soil available K as influenced by long-term tillage (A) and rotation systems (B) for the 0-15 cm depth. Error bars represent standard errors.

Table 8:Soil available potassium (K) concentrations as impacted by crop rotations under no tillage and conventional tillage at the soil surface layer (0-15 cm).

The authors acknowledge the financial support from the Agriculture Experiment Station of the South Dakota State University.

Copyright: © 2015 Ibrahim MA, et al. This is an open-access article distributed under the terms of the Creative Commons Attribution License, which permits unrestricted use, distribution, and reproduction in any medium, provided the original author and source are credited.