Copyright: © 2015 Bourgon AL, et al. This is an open-access article distributed under the terms of the Creative Commons Attribution License, which permits unrestricted use, distribution, and reproduction in any medium, provided the original author and source are credited.

The patient was first evaluated by gastroenterology and underwent upper endoscopy with findings significant for a 1 cm nodule at the GEJ with thickening of the gastric cardia and associated erosions.

Biopsies were taken of the gastric body and antrum, and the nodule. Biopsies of the body and antrum returned as benign. Biopsy of the nodule returned as well-differentiated adenocarcinoma, HER2/neu was positive by fluorescence in situ hybridization (FISH). Computed tomography (CT) scans of the chest, abdomen, and pelvis revealed mild gastric wall thickening without evidence of metastatic disease.

Positron emission tomography (PET) scan identified two areas of hypermetabolic foci along the greater curvature of the stomach in addition to activity at the GEJ without evidence of metastatic disease (Figure 1A and B). 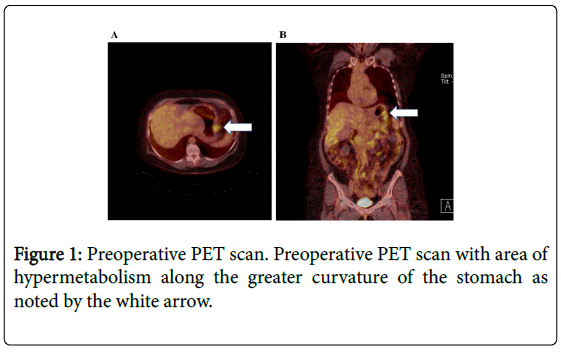 At the time of surgery, the stomach was found to be edematous at the cardia and fundus including the area of the lesser curvature with concern for linitis plastica extending into the distal esophagus (Figure 2). There was no evidence of peritoneal disease at the time of laparoscopy. Additionally, genetic testing was performed as part of her initial work up and evaluation secondary to her family history of breast and rectal cancer with no clinically significant mutations identified.

She received 6 cycles of neoadjuvant chemotherapy with mDCF and trastuzumab [1]. Four weeks after the completion of her neoadjuvant therapy, she underwent a laparoscopic, robotic-assisted total gastrectomy with roux-en-Y esophagojejunostomy, D2 lymphadenectomy and jejunostomy tube placement. The majority of the dissection was completed robotically and the anastomosis was hand-sewn using the robot (Figure 3). Pathology revealed grade 3, poorly-differentiated adenocarcinoma centered at the cardia and extending to the GEJ and fundus, surgical margins were negative, 6/16 lymph nodes were positive, and HER2/neu was negative. Final staging was ypT3N2, Stage IIIB. Final pathology did not reveal any evidence of chemotherapy response with all viable tumor noted. The postoperative course was complicated by a slow return to oral intake. Tube feeds were continued for 8 weeks postoperatively following which the jejunostomy tube was removed. Secondary to the poor pathologic response to neoadjuvant chemotherapy, it was decided to treat postoperatively with 5-fluorouracal-based chemoradiation (4500 cGy over 5 weeks) as per McDonald protocol, which she completed without further delay [2]. The described case represented an unfortunate circumstance of locally advanced gastric cancer progressing to metastatic disease despite best medical therapy. It highlights the complex presentation of gastric cancer patients and the importance of multidisciplinary discussion in their management.

The classification of GEJ cancers was first described by Siewert in 2000 [3]. The classification system allows for uniform description of these tumors in addition to guiding recommended surgical therapies. Classically, type I tumors are recommended for esophagectomy and type III tumors are recommended for total gastrectomy [4]. Type II tumors can be treated with either surgical approach with the goal to obtain adequate lymphadenectomy and negative surgical margins. In their original series, postoperative mortality was higher for the esophagectomy group suggesting a preference for gastrectomy when technically feasible [3].

There remains some debate in the published literature regarding the management of Siewert’s type III GEJ tumors. Type III tumors are known to be larger at presentation and more infiltrative when compared to type II tumors [5,6]. The median 5 year survival for type III tumors is 51-63% [7-9]. In a 2007 series by Barbour et al. 52% of patients with type III tumors were treated with gastrectomy with limited esophagectomy while the remaining type III patients were treated with extended esophagectomy.[10] The median esophageal margin length was 2.5 cm for type III tumors compared to 3.5 cm for type 1 and 4.0 for type II. Margin length of >3.8 cm was found to be an independent predictor of overall survival, similar to the number of positive nodes, AJCC T classification, and poorly differentiated tumors. Margins were not predictive of survival in patients with greater than 6 positive lymph nodes.[10] Similar studies have supported wide margin resection [11]. However, in a 2015 series from the US Gastric Cancer Collaborative, the importance of gastric cancer resection margins was re-examined. Proximal margin length was not found to be predictive of increased local recurrence or overall survival. Further, while R1 resection was associated with increased nodal disease burden, it was not found to be associated with increased local recurrence or decreased overall survival. The recommendations of this series were to limit wide margin resection, particularly if it required extended esophageal resection [12].

Kneuertz et al. evaluated the type of surgery for Siewert’s type II and III tumors in relation to overall survival [7]. The majority of patients in this study presented with locally advanced disease and were treated neoadjuvantly with chemoradiation. Seventy-five percent of patients with type II tumors were treated with esophagectomy, while 88% of patients with type III tumors were treated with gastrectomy. The type of surgery was not found to be predictive of R0 resection rates or overall survival. The only factor found to be associated with improved overall survival was extended lymphadenectomy. Similar results were previously reported by Barbour et al. in 2007 with adequate staging, as defined by >/= 15 lymph nodes, in T2 or greater tumors to be an independent prognostic factor of improved survival [13].

In conclusion, the current literature would support that the type of surgery selected is not an independent predictor of outcome. But rather, the adequacy of oncologic resection focusing on R0 resection and, more importantly, adequate lymphadenectomy appear to improve patient outcome. As this case demonstrates, despite best surgical management including negative-margin resection and extended lymphadenectomy, gastroesophageal junction adenocarcinoma remains an aggressive disease with increased rates of local and distant recurrence.