Background: Amid the COVID-19 pandemic, mental health-related symptoms (such as depression and anxiety) have been actively mentioned on social media.

Methods: We collected COVID-19 and mental health-related tweets from the UK between March 5, 2020 and January 31, 2021 through the Twitter Streaming API. We conducted topic modeling using Latent Dirichlet Allocation model to examine discussions about mental health concerns. Deep learning algorithms including Face++ were used to infer the demographic characteristics (age and gender) of Twitter users who expressed mental health concerns related to the COVID-19 pandemic.

Conclusion: The COVID-19 pandemic has noticeable effects on mental health concerns on Twitter in the UK, which varied among demographic and geographic groups.

On March 11, 2020, the World Health Organization officially announced the COVID-19, the contagious disease caused by the novel coronavirus SARS-CoV-2, as a pandemic. In the United Kingdom, for example, there were over 4.3 million confirmed COVID-19 cases and more than 120,000 associated deaths reported up to the March of 2021 ever since the first case was confirmed in York in England on January 22, 2020 (“Coronavirus (COVID-19) in the UK,”). The COVID-19 pandemic is widely disruptive to the whole society, especially the economy. For example, United Kingdom has gone through three lockdowns, and many businesses have been temporarily or permanently shut down. Even worse, both the pandemic itself and the economic disruption had a serious impact on people’s mental health. It was estimated in 2014 that one in six adults in England had a common mental disorder, and mental disorders were more common in people living alone. Due to the factors like isolations and restrictions, economic recession, or even the neurological and psychiatric sequelae of COVID-19, mental health in the United Kingdom had significantly deteriorated during the early stage of the pandemic compared to the pre-COVID-19 era. While recent studies showed that the evolving COVID-19 pandemic leads to mental health globally with increasing cases of depression, self-harm, suicide, etc., it is crucial to identify the individuals at risk of mental health issues as early as possible so that substantial resources could be better allocated.

Twitter, one of the most widely used social networking services globally, provides a rich data source for studying mental health during the COVID-19 pandemic. A pre-pandemic study has shown that the application of natural language processing techniques on Twitter data could provide insights into several specific mental health disorders. Since the outbreak of COVID-19 led to a burst of information in social media, many studies, mostly within the United States, have been conducted to monitor and analyze the tweets (i.e., Twitter posts) with a specific focus on people’s mental health during the pandemic.

In this study, we specifically focused on the mental health-related tweets associated with the COVID-19 pandemic in the United Kingdom. We aimed to understand potential mental health concerns expressed on Twitter during the first two waves of the UK’s pandemic temporally and geographically. Furthermore, we employed demographic inference to characterize Twitter users with mental health concerns [1-5].

We obtained the daily new COVID-19 cases from March 4, 2020 to January 31, 2021 from the COVID-19 datasets published and updated by GOV.UK [https://coronavirus.data.gov.uk], as well as the United Kingdom public sector information website.

To identify the tweets from the United Kingdom based on their tagged geo location, we constructed a comprehensive list of the UK’s geographic divisions with the names of four constituent countries (England, Scotland, Wales, and Northern Ireland) and their administrative subdivisions, which includes regions (e.g. East Midlands as one of nine official regions of England), counties (e.g. Greater Manchester as the metropolitan county), districts (e.g. Birmingham as the Metropolitan district), boroughs (e.g. London borough), and cities (e.g. London). Considering many places in the United States were named after places in the UK, such as Manchester, Birmingham, and Rochester, we further removed the tweets with geolocation that contains “American” characteristics, including the terms “United States”, “US”, the names of states, and the capitalized state abbreviations (e.g., NY and CA). Finally, a dataset of 317,292 mental health-related tweets posted from 148,534 unique Twitter users in the United Kingdom, was obtained for our further analysis.

We assigned the mental health-related tweets to subsets of four countries (England, Scotland, Wales, and Northern Ireland) and three most populated metropolitan areas (London, Birmingham, and Manchester) based on the geolocation information in each tweet. 4.3 Topic modeling

To identify the most frequent topics discussed in our dataset, we applied the unsupervised Latent Dirichlet allocation (LDA) model which is a generative probabilistic model widely used for collections of text corpora. The LDA model can allocate every word in the corpus to a specific topic, where each word in the topic is given a weight value based on its appearance.

Before applying the LDA model for text preprocessing, we first removed the noise, including email addresses, URLs, etc., and tokenized the text by removing all punctuations and converting sentences into a list of lowercase tokens. Then, we removed the stop words defined by Natural Language Toolkit (NLTK) library, including “a”, “the”, etc. Bigrams were then identified, and words were lemmatized to their base forms by the spacy library. Finally, we constructed the corpus and dictionary on the preprocessed dataset and input them into the LDA algorithm implemented in the Genism package. Models with different parameters of topic numbers were built, and the topic coherence score of each model was used to determine the optimal number of latent topics in our dataset.

Temporal analysis of mental health concerns on Twitter in the UK

To understand the dynamic change in mental health concerns on Twitter in the UK during the COVID-19 pandemic, we examined a daily number of mental health-related tweets, as well as daily new COVID-19 cases from March 5, 2020 to January 31, 2021. As shown in Figure 1, there were three major waves of COVID-19 cases in the United Kingdom: the first wave was between March and May in 2020; the second one was between late August and November in 2020; the third one was between early December in 2020 and January in 2021. Meanwhile, we observed that there were three major waves of mental health-related tweets, which show similar patterns as the daily COVID-19 cases. 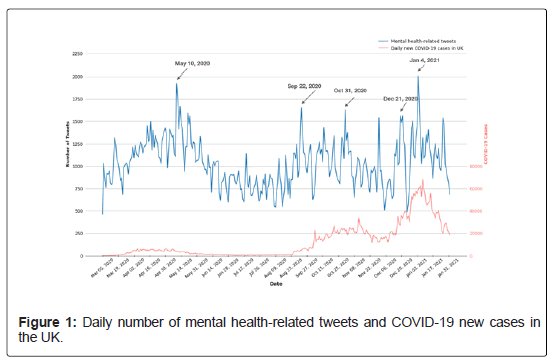 The grey arrows in Figure 1 indicate five peaks (including May 10, 2020, September 22, 2020, October 31, 2020, December 21, 2020, and January 4, 2021) with a relatively high number of mental health-related tweets. We further examined the archived UK news released within the 24-hour period for these five peaks. Most of the news is about government responses to control the COVID-19 pandemic, particularly the announcements of restrictions or lockdowns (Supplemental Table 1 and Figure 1). 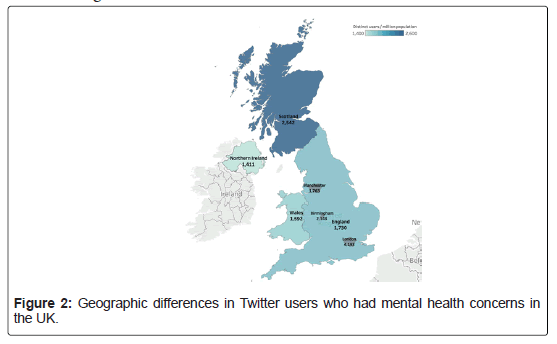 Figure 2: Geographic differences in Twitter users who had mental health concerns in the UK.

To obtain content-wise insights into what topics of discussion are often associated with mental health issues, the LDA model was trained on our tweet dataset for topic modeling. Table 1 showed the major 10 topics identified by our model. As shown, the general concern about pandemic for its uncertainty and the impact on daily life is the most frequently discussed topic (14.4%), followed by the coronavirus skeptics (12.7%) that argue that coronavirus isn’t a real concern but a government tool to spread fear. It’s noteworthy that the topic regarding death toll (10.9%) includes two opposing points of view: the death toll is overwhelming and depressing while the other view thinks the number of deaths is significantly exaggerated by the authority.

Before the COVID-19 pandemic, compared to rural people, British urban people had higher rates of CIS-R morbidity, a measure of mental disorder and depression. Moreover, the population density was positively correlated with the Twitter activity. These studies coincide with our geographic analysis results that the Great London metropolitan area, with the highest population and population density within the United Kingdom, has the highest proportion of Twitter users with mental health concerns, followed by Birmingham and Manchester metropolitan areas. All three major metropolitan areas have a higher percentage of Twitter users than the average level of the whole of England. In addition, Scotland appears to have a higher proportion of Twitter users with mental health concerns than the other three countries in the UK.

Similar to previous studies conducted on the general COVID-19- related tweets, our topic modeling results showed that the concern about the pandemic and dissatisfaction with government responses are the two major topics discussed in the mental health-related tweets, which also conforms with our conclusion from temporal analysis results. According to a recent study on tracking mental health and other symptoms mentioned on Twitter in the United States, monitoring discussions on Twitter related to mental health and other symptoms associated with the COVID-19 pandemic could provide a reliable indicator for the well-being during the public health crisis. Using tweets from the UK, we observed that the severity of the pandemic and the government’s strict measures to control the spread of the coronavirus could both affect the mental health concerns of British people-the latter’s impact might be more significant. In addition, by examining the representative tweets for each topic, we found that the COVID-19 skeptics, which argued that COVID-19 cases are hyped by the government or media to spread fear, took a non-negligible part in the mental health-related discussions. Moreover, the topics regarding the promotion of mental health care and support and relief for the vulnerable populations are also identified.

In this study, Twitter users who expressed mental health concerns did not necessarily have mental health issues. Additionally, only a small subset of Twitter users provided the geolocation information, as well as a valid human profile picture. Moreover, the user profile pictures may not come from their own. Demographic inference of Twitter users using deep learning algorithms may not be accurate. Therefore, these might lead to some biases in our results. In this study, we only focus on Twitter data and Twitter users, which may not necessarily represent the whole population in the UK [11-20].

Copyright: © 2021 Zhang D, et al. This is an open-access article distributed under the terms of the Creative Commons Attribution License, which permits unrestricted use, distribution, and reproduction in any medium, provided the original author and source are credited.