Copyright: © 2015 Tekin F, et al. This is an open-access article distributed under the terms of the Creative Commons Attribution License, which permits unrestricted use, distribution, and reproduction in any medium, provided the original author and source are credited.

A 29-year-old woman was admitted to our department with a 3 week episode of bloody diarrhea occuring 4 to 7 times per day and associated with crampy abdominal pain. She had no history of drug allergy or atopy. At the admission, her physical examination was unremarkable with a weight of 54 kg, axillar temperature of 36.5°C, blood pressure of 100/70 mmHg and a pulse rate of 81/min. The laboratory findings including blood chemistries, liver function tests, complete blood count, serum proteins, urinalysis were found to be in normal ranges except high erythrocyte sedimentation rate (87 mm/hour, normal <20) and high C reactive protein (8 mg/dl, normal <0.5). Colonoscopy revealed many aphthous ulcers surrounded by areas of normal-appearing mucosa at the transverse colon, ascending colon and cecum. Mucosa of the terminal ileum was normal. The radiography of the small bowel with air contrast barium enema was found to be normal. Histopathological examination of the specimen obtained from the colonic ulcers revealed the inflammation and non-caseating granulomas suggesting Crohn’s disease. The PPD test revealed a negative reaction with 2-mm in diameter. The patient was diagnosed as Crohn’s disease with colonic involvement. 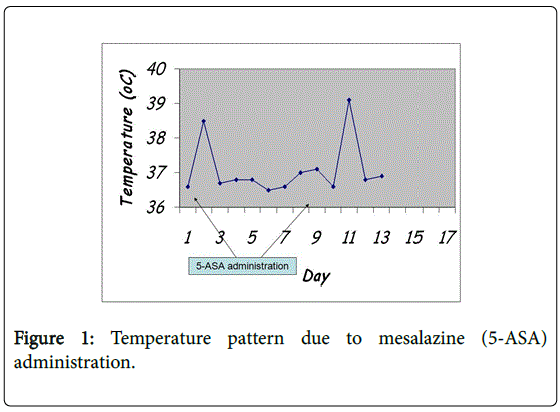 Common adverse effects related to mesalazine include skin reactions, headache, nausea, dyspepsia, pancreatitis and tubulointerstitial nephritis [1,2]. Fever is a rare adverse effect of mesalazine [3-5]. We have been sure that, in our patient, occurrence of fever was due to mesalazine therapy since she developed fever after twice mesalazine challenge of 5-days interval. Physical examination and laboratory tests revealed no other cause for fever. In conclusion, any patient treated with mesalazine who develops fever should be considered as having drug-hypersensitivity. We suggest the discontinuation of this drug, and the steroid administration after excluding other causes of fever, especially the infections.